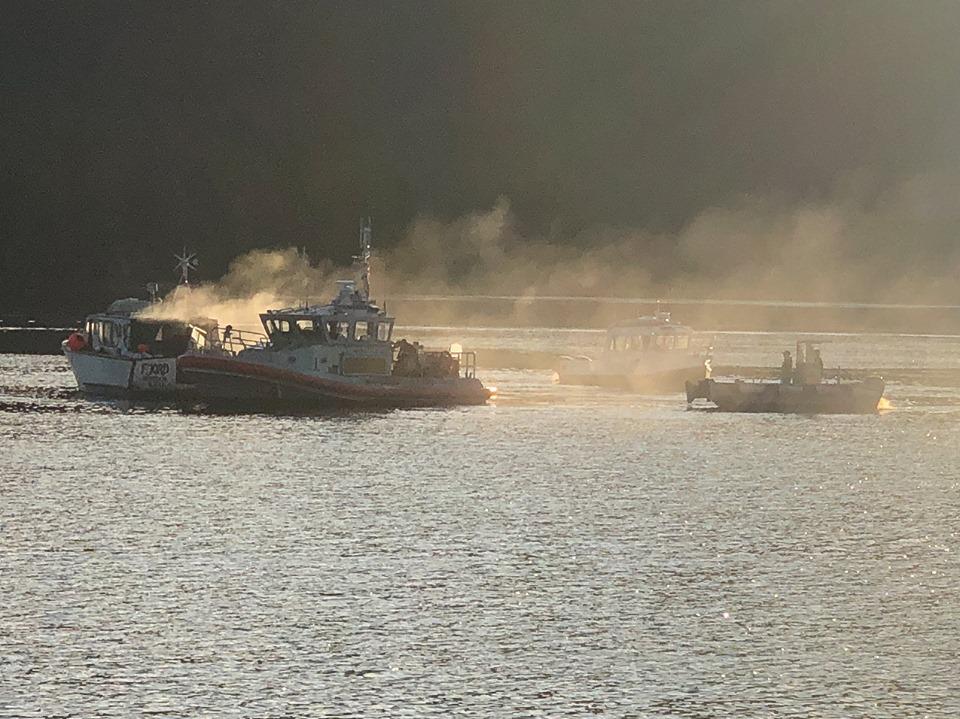 Three mariners and a dog are safe after a Ketchikan boat fire. (Photo credit to Ketchikan Fire Department.)

A 45-foot Response-Boat Medium crew from Coast Guard Station Ketchikan and the crew of Ketchikan Fire Department vessel Harry Newell arrived on scene at 4:57 p.m., Friday, and found the three mariners and a member of the Ketchikan Harbor Masters Office had successfully extinguished the flames.

The RB-M crew towed the boat to a dock near Ward Cove, where members of the Ketchikan Fire Department continued to fully extinguish the fire. The Harry Newell's crew transported the mariners to shore. No injuries were reported, and all three mariners are reportedly in good condition.

At 4:40 p.m., watchstanders at the Coast Guard Sector Juneau command center received notification from a person on shore reporting a 40-foot recreational boat, Fjord, was on fire north of the airport with people aboard.

Watchstanders issued an Urgent Marine Information Broadcast and directed the launch of the small boat crew from Station Ketchikan and an MH-60 Jayhawk helicopter crew from Air Station Sitka.

"This was a best-case scenario. Three people are safe tonight because of the quick action of the Ketchikan Harbor Masters Office," said Scott Cichoracki, Sector Juneau command center watchstander. "They recognized the fire and took quick action to get on scene and help out. We are grateful to them and the Ketchikan Fire Department for their coordinated efforts to help these mariners during their time of distress."

Weather on scene was 5 mph winds with calm seas.