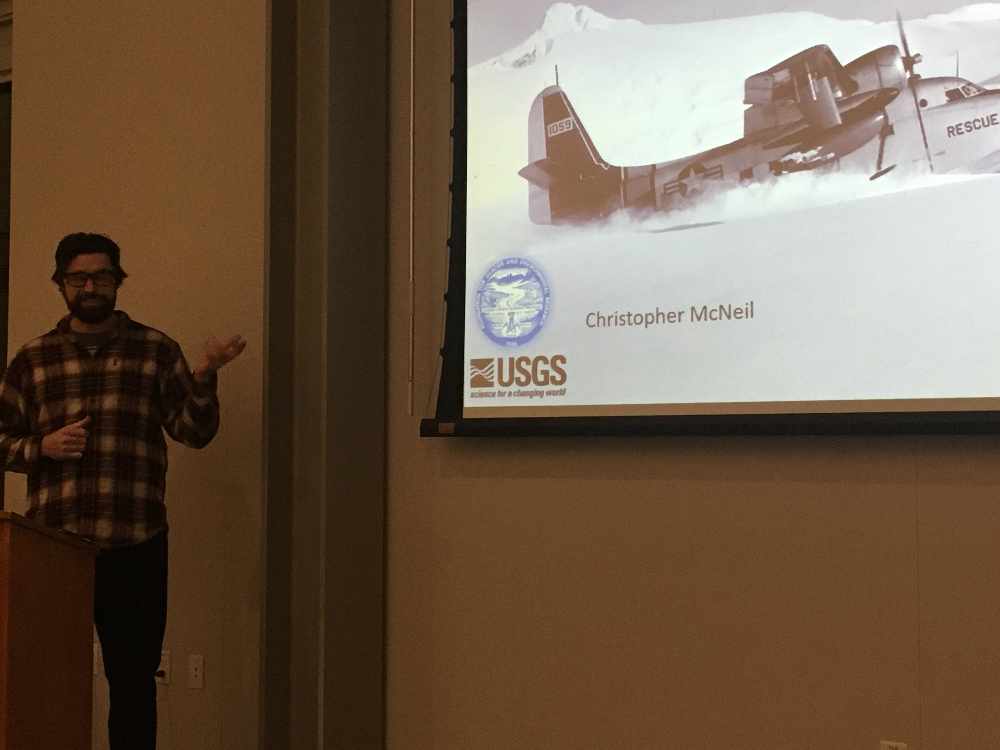 Research of the icefield began in 1948.

McNeil is a glaciologist for the US Geological Survey.

He explained he was blown away when he first visited the Juneau Icefield.  He noted generations of people have studied there.  He has worked on icefield research for 11 years.

"A glacier is a mass of ice that originates on land as a result of high snow accumulation that occurs year after year.  Enough snow falls in the mountains that not all of it can melt away during the summer," he explained.

Annual precipitation ranges from eight to 15 feet.  Temperatures range from -10 degrees to 70 degrees.

William Osgood Field with the American Geographical Society began glacier research in Alaska in 1926.  He saw the need for a long-term glacier monitoring program.

The Office of Naval Research provided 10 years of research funding.  They gained knowledge of how humans fared in an arctic environment.  "The Department of Defense was concerned about a Russia invasion at the beginning of the Cold War."

"We rode the coattails of World War 2.  They got unprecedented amounts of funds that you could not get today," he added.

In the 1960s the program continued as mostly an educational and training program.  It started with Doctorate students and today involves graduate and undergraduate students.

84 students took part in the research this past summer.  Each year the dig 30 snow pits across the glaciers.  They measured 7.5 meters of snow on the glacier. In the past, they began the research after the July 4th parade.  This year they will be on the field on June 14th.  Much of that is do to climbing temperatures.

The Taku Glacier has gained 19 meters in cumulative mass since 1948.  The Lemon Creek Glacier has lost just under 50 meters during that time period.

Since 1948 the average summer temperatures have increased from 9 degrees to over 12 degrees Celcius at the Juneau International Airport.

"The increase in temperatures in the Juneau area are causing both glaciers to migrate toward more and more negative mass loss."

Taku Glacier had been advancing for 130 years.

Glaciers on average in Alaska contributed 75 gigatons of water equivalent mass into the oceans each year.  It is about the size of 7 billion elephants.  "Alaska is losing mass from glaciers more than any mountainous areas in the world."

"We are wasting away at a much more rapid pace," he added.

About 50 percent of sea-level rise in the world comes from melting glaciers.

McNeil said glaciers are not desolate places where nothing can provide. He noted a number of species can survive in these conditions.  Cold water also assists salmon as they reach their breeding grounds.  The super-rich marine environment also attracts whales to Alaska.

The Columbia Glacier retreated over 12.5 miles and lost half of its mass in the past 40 years.

Taku is producing icebergs again which could impact the ecosystem in the Taku River.

He said the retreat of the Taku Glacier could be greatly enhanced by the removal of the sediment shoal currently protecting the glacier from direct contact with the ocean.

The event was sponsored by the Juneau-Douglas City Museum.  They will host an artist discussion on Friday at 5:30 pm about the role art plays in climate change.