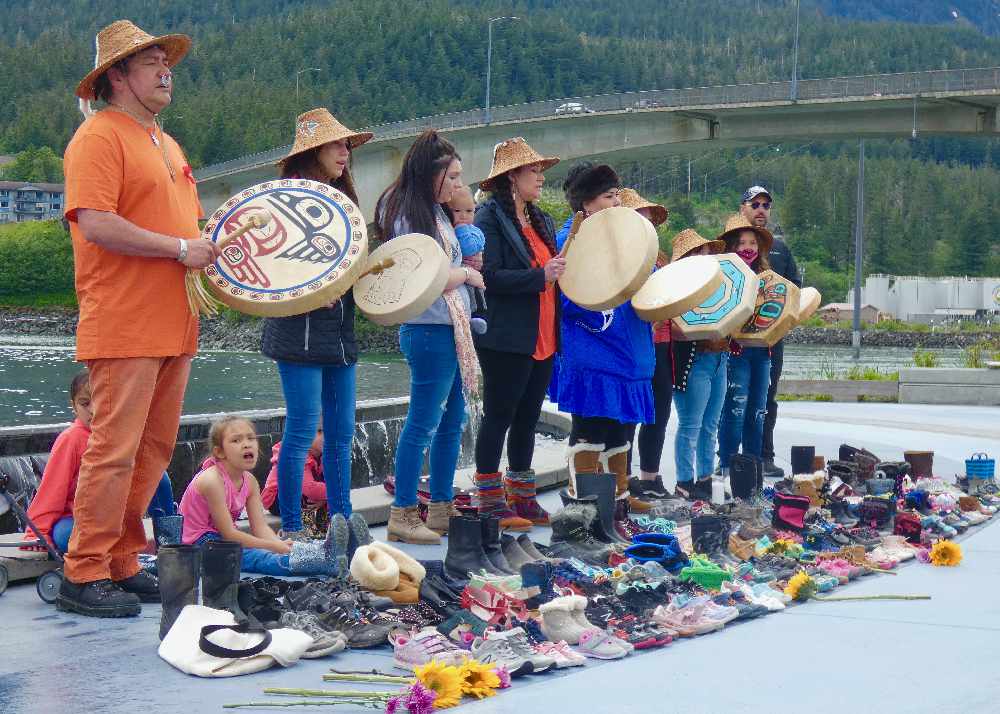 Two songs were performed after speeches. The performers stood behind the shoes meant to represent the children who were found. (KINY / Anna Frazier)

Juneau, Alaska (KINY) - On Saturday, a crowd gathered around the whale statue in downtown Juneau to hold a vigil for the 215 children that were found buried at Kamloops Residential School in Canada in late May.

Children's shoes, ranging from toddler-sized to older kid's sizes, were arranged on the ground in front of the fountain. The shoes are intended to represent each of the 215 children.

"I'm a mother, and when these kinds of things happen and I see these visuals--like the shoes displayed--it really just hits home," said Rhonda Butler, who is president of Alaska Native Sisterhood Camp 2 and also a member of the Juneau Tlingit and Haida Community Council. She attended the vigil on Saturday with her family. "It's heartbreaking."

Kamloops was far from the only residential school for Indigenous children. Similar institutions were established across Canada and the United States in the 19th and 20th centuries, including in Wrangell and Sitka. Residential schools separated Indigenous children from their families and cultures, and several speakers at the vigil mentioned the sexual and physical abuse that children had to endure.

Jeni Brown, one of the organizers of the event, said the effects of residential schools are felt here in Juneau. "We have people that are here today, who their parents went to the Wrangell school and Sheldon Jackson [in Sitka]," Brown said in an interview with News of the North. She added that it's important for Alaska to recognize the significance of the discovery at Kamloops.

Brown stressed that the vigil was held for healing. "As soon as the healing starts to take place, it will carry on for many generations," she said.

Several speakers addressed the crowd during the event. Leona Santiago spoke to her own experience of growing up as a Native Alaskan person. "At age two, I was taken away from my mom and dad and put into state custody, and not returned until I was almost 15," she shared. "I survived many things that a child should never have to go through."

She said the discovery of the children's remains hurt her. "Because it makes me think of my pain," Santiago said. "Here I am, 70 years old, and I feel hurt. I feel hurt."