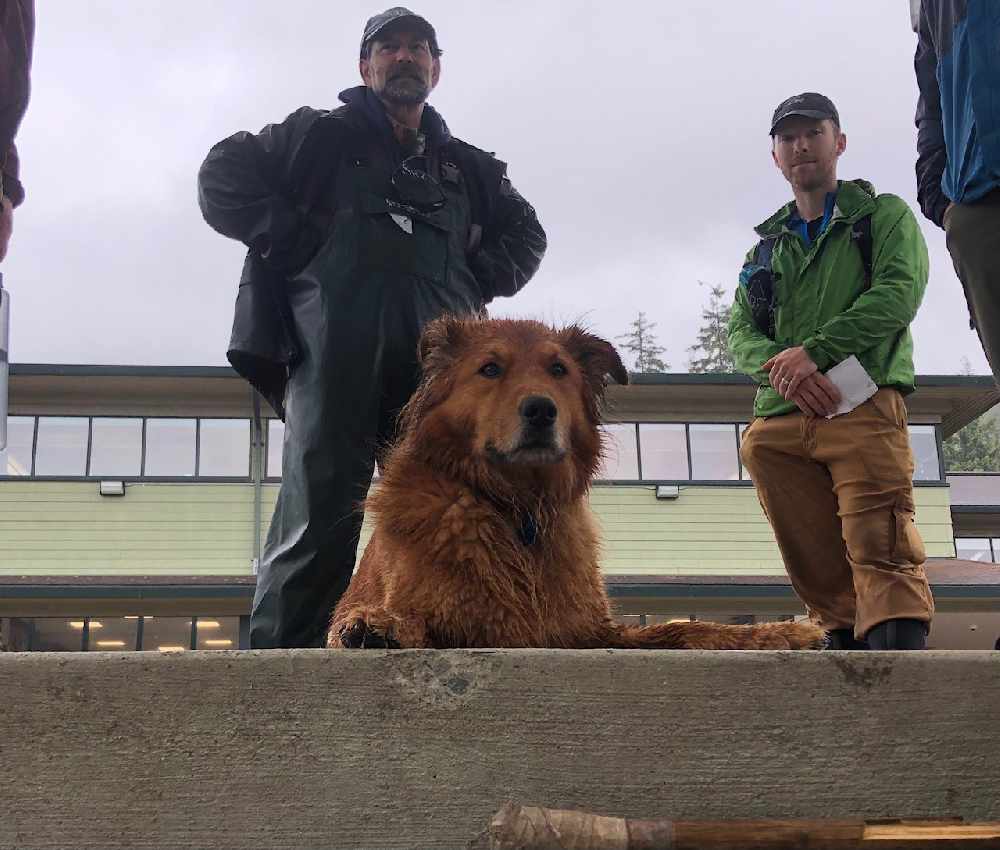 Stickeen (center), Greg Chaney (left), and Quinn Tracy (right) at the press briefing Thursday, after the group investigated the mountain.

Juneau, Alaska (KINY) - A new study has identified 20 locations around the state that could be potential landslide hazards. One of those potential hazards is on the Lemon Creek side of Thunder Mountain in Juneau.

Bretwood "Hig" Higman, executive director of Ground Truth Alaska, said he was working on a study in Prince William Sound when he realized something. "One of the things that jumped out when we were looking at [Prince William Sound], is it's a super obvious instability, it's something that any geologists could have identified--you don't need much expertise," he said, at a press briefing Thursday morning. "And yet, even though thousands of people visit that area, nobody had noticed it, and it kind of was a red flag that maybe we need to do a little bit more of just looking around for the obvious things."

He said he spent the past year looking across the state, using satellite images and LiDAR technology, which is similar to radar but uses light. The Lemon Creek side of Thunder Mountain was one of the locations he identified.

A team of scientists and experts traveled up the mountain early Thursday morning to get a better look at the area. They included former City and Borough of Juneau lands manager Greg Chaney, CBJ GIS specialist Quinn Tracy, senior service hydrologist for the National Weather Service Aaron Jacobs and his dog Stickeen, CBJ emergency programs manager Tom Mattice, and Hig.

"The reason this slope stands out is that up on the mountain top, there are some linear features in the tundra, that looked like they are cracks," Hig said. "They're places where the mountain has kind of sagged out this side."

There are also signs of previous slides. "The LiDAR maps out the ground surface, and you can see old landslides have come down into this valley," Hig said, adding that there are four they identified. The oldest, he estimates to be about 10,000 years old. Hig said he estimates the newest slide to be 500 to 2,000 years old, based on his guess for the age of surrounding trees in the area.

Mattice stressed that by conducting this investigation, they are not suggesting a landslide will happen soon. "It's not like we're talking about a 'tomorrow event,' but we wanted people to be aware that some of this information has come to our attention and we're starting to look into it a little more," Mattice said.

He added that they will continue to monitor the mountainside for any changes. "The reality is, is we can go back and measure those cracks and they probably won't change a bit," he said. But if there are any indications of movement, they will move forward with plans for potentially affected areas.

Both Hig and Mattice said that Juneau residents can help with the monitoring. If a mountainside is developing a landslide hazard, it will likely start to deform years before anything comes down, said Hig. Regular hikers in the Juneau area, particularly on Thunder Mountain, can keep an eye out for some clues.

"There'll be cracks, there'll be stretched roots across those cracks sometimes, raw soil sifting down into sinkholes, you might see tilted trees that are maybe trying to correct themselves but a whole stand that are tilted the same way," Hig said.

Hig reiterated that they are not trying to doomsday-talk the town. "We were looking for that today, we did not find it," he said.