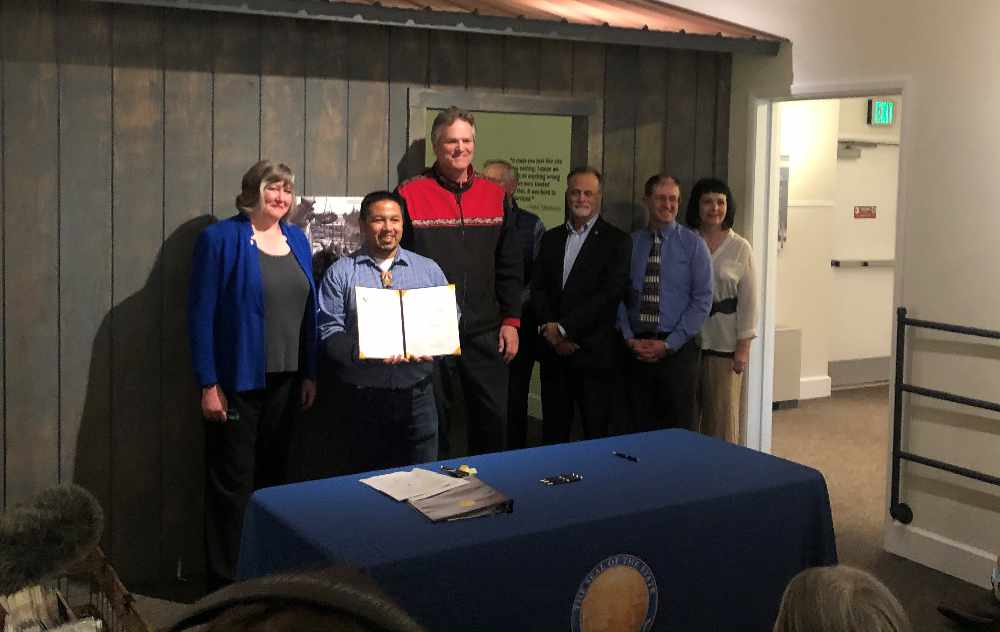 The signing took place in Juneau's city museum, where a special exhibit is up that details the stories of the Unangan people that were removed from western Alaska and placed in internment camps in Southeast during World War II.

"We want to make sure that folks know that there were approximately 400 Unangan folks that were interned," said Governor Dunleavy at the signing. "And, unfortunately, a number of folks passed away during that internment, and are therefore buried far away from their homes."

He stressed that the law helps make sure the Unangan people are not forgotten. "We want folks to know, we want their descendants to know, that it's not been forgotten," he said. "That this place now can be turned into a place of respect and of remembrance."

Juneau Representative Sara Hannan, the sponsor of HB10, said it had been 79 years since the Unangan people were removed from St. Paul and St. George islands, placed in Funter Bay, and "told to simply survive."

She thanked many people, but especially thanked Juneau resident, Martin Stepetin. "A few days after I had first been elected, before I was sworn into office, [he] said 'I got an idea for a bill,'" Hannan said.

Stepetin has family members who were interned. "Now, we know that these people here can rest, and they won't be bothered, there will be no logging roads going through there, there will be no fish camp set up next to the cemetery there," he said. "We know it's protected, so thank you very much."

The law officially protects 250 acres of land on Admiralty Island.