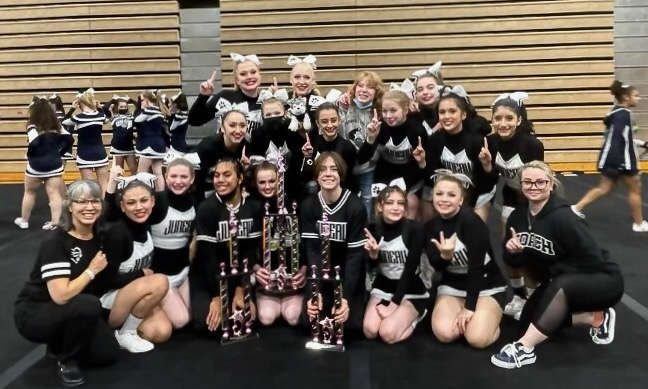 Juneau, Alaska (KINY) - The Juneau Husky Cheer Team went from being part of Friday night’s high school football state championship game in Anchorage to Saturday’s Rally in the Valley cheer competition in Palmer with a transition from freezing field to heated gym that was as flawless as their performances in both.

“We placed higher than expected,” Juneau Husky coach Carlene Nore said of the team filled with Juneau School District high school athletes. “But the team worked hard all season. We had changes to our routines right up until travel day, at the last minute. The team only cleanly hit a ‘full out’ the day before leaving for Anchorage. I knew we would be in the middle somewhere but I didn’t think we would come out on top.”

After two performances at halftime of the Juneau Huskies versus East Anchorage Thunderbirds state championship football game and 48-plus minutes of emotional and physical support of their hometown team, the cheerleaders woke up early the next day and traveled to Colony High School where they earned first place in two cheer categories in competition, taking first in Game Day Event out of five teams and first in Halftime Routine out of eight teams.

“And pyramids and tumbling,” Nore said. “That was crazy because they were running behind. We were given 10 minutes to practice and when we finished they said we were on. We thought they meant we were on deck. No, we were on. So they went from immediately running a ‘full-out’ to right onto the floor and performed. So hats off to the kids for pulling through. Their conditioning paid off. They were able to do that without a problem. It’s always nice when they can pull it off and do what they have been training to do.”

While two first-place finishes was more than the team expected, what came next was pom pom dropping as their tumbling, dance, jumps, cheers and stunting earned the Grand Master Champs designation - meaning the Husky team had the highest team score of any team in the various categories.

“Unexpected for sure, finishing on top of our division,” Nore said. “We couldn’t see the other teams perform ahead of us so we had no idea how they did. You never know exactly where you fit in until awards. We were very happy coming in first in our division but with Grand Master Champs, meaning we had the highest score of all the teams throughout the whole competition, that was absolutely fantastic.”

“This whole season we have been looking forward to it,” Juneau-Douglas Yadaa.at Kalé junior Saelyr Hunt said. “We have been preparing our routines, practicing, working really hard every day waiting for that moment and, just like, when they called our name it just felt so good. The hard work really paid off for that.”

Added JDHS senior Ben Iona, “It was definitely a very exciting experience. Definitely very exciting to win but sad that this is my last year. Definitely really exciting but mixed emotions in my head. It was a really great team, we had great bonding in the few weeks we had.”

In addition, Hunt and Iona competed in solo competitions among 18 cheer athletes from around the state. They created their own routines that included dances, tumbling and jumps.

“It was really good competition and it was a good way to see how we fit,” Nore said. “Both of them had never done anything like that before.”

“I knew with Ben that it would come down to his showmanship and personality shining through,” Nore said. “And he did that. He was an amazing performer and put everything out on the floor. It was just pure entertainment. Saelyr is just one tough competitor. She did not decide to do a solo until Thursday night. So that solo was done between Thursday night and putting it on the floor Saturday. She didn’t do a full-out of running the routine until she was back in warmup. She was very nervous but she did an outstanding job.”

Hunt said she has had experience in solo via her dance background.

“It’s a little different, though,” she said. “There are more components of it and you have to complete each part that is required. We pulled it together in a very short amount of time and we still ended up in top placings.”

The cheer competition was following another difficult environment, state football.

Friday’s football game was the coldest temperature the team had cheered in this season.

“It was really cold and hard to push through but we ended up doing it throughout the game,” Hunt said. “We tried to keep our energy up and I feel like we did a pretty good job of doing that. At the end we got our crowd more excited and more involved and that really helped out. It helped the team push a little bit more.”

Added Iona, “It was quite an experience. This was my first season cheering for the football team. It was freezing cold.”

Adding to the stress of being the first competition for the Husky Cheer Team was a COVID contact that resulted in some members of the team unable to travel from Juneau to the football game in Anchorage and compete at the Rally in the Valley at Colony High School in Palmer.

“As a team we haven’t gone to anything like that,” Hunt said of the competition. “We didn’t know completely what to expect. We had a general idea but we didn’t know what the other teams would look like or how it would be run. When we walked in we sat together the whole time cheering on other teams. It was a great time and really fun to be there. I’m very proud of us. I think everyone should be very happy with how we came out through the competition and how well our season was. We improved a lot. Everyone should be looking forward to the next season.”

Said Iona, “Having a team of great listeners makes the job easy. Having a team that all get along together is really helpful. Something I liked about this team is that they are very kind and definitely really outgoing.”

Hunt said when the final jump had been landed and the music ended she was elated.

“In that final second all I was thinking about was that we did it,” Hunt said. “We pulled through and we hit our stunts, we smiled the whole time, our energy was good. I could feel it throughout the whole team even though I couldn’t see everyone I felt it. I wasn’t really thinking about anything but how we pulled through and how well we did and how I was excited to see how it would turn out.”

Coach Nore also commented on the support the cheer team received from the community and the football team.

(for a podcast interview with coach Carlene Nore and cheer team members Saelyr Hunt and Ben Ione, plus video, click the On Demand tab and click Alaska/Juneau Sports with Klas Stolpe) 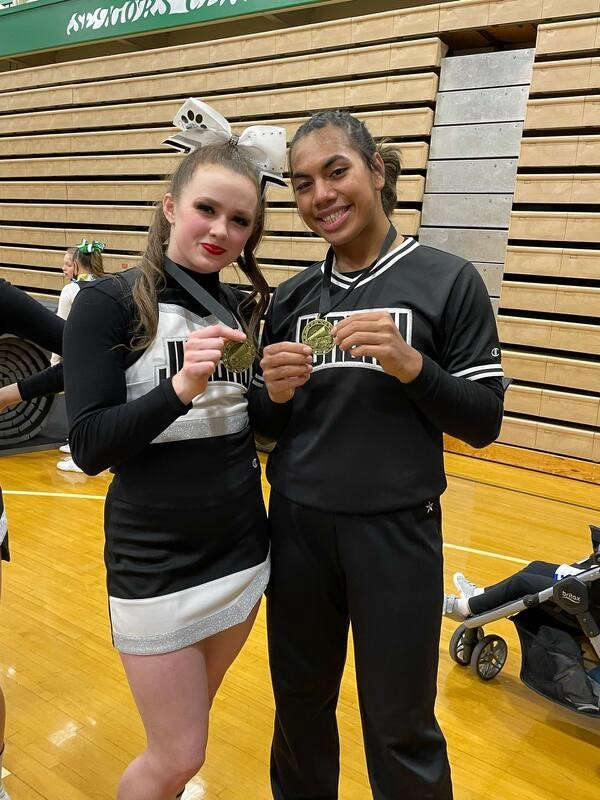