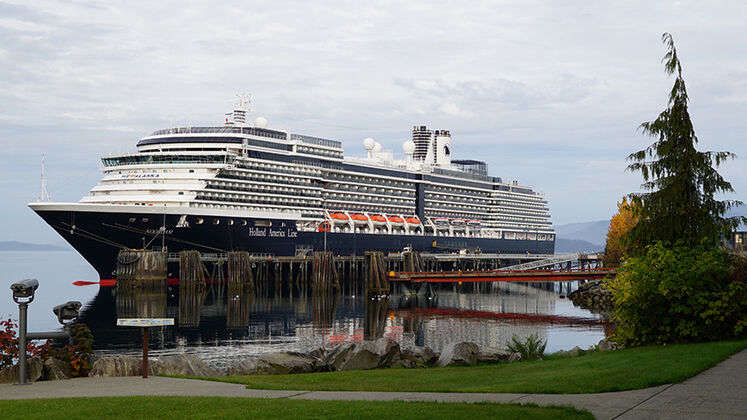 Curious travelers flooded along Front Street and walked as far down as Peninsula Street and out to the Volunteer Park Nature Trail, stopping in shops and taking as many photos as they could during the seven hours the ship was in port.

The Noordam wasn't originally scheduled to stop in Wrangell; cruise lines typically schedule their routes about two years in advance. The stop was on the ship's final Alaska summer voyage, which took it from Vancouver, British Columbia, to Hubbard Glacier and Misty Fjords. The day before its stop in Wrangell, the Noordam was in Ketchikan and was scheduled to stop in Juneau next.

Fred Angerman, Wrangell port manager for Cruise Line Agencies of Alaska, said the 1,664 count included "revenue and non-revenue passengers." Non-revenue passengers are usually entertainers or others who aren't counted as part of the crew. He said the ship is "pretty much as big as we can get within 50 feet," though it's not the largest ship he can remember Wrangell receiving.

"We had the Serenade of the Seas. It was a 962-foot vessel," Angerman said. That ship, run by Royal Caribbean, came through rough weather in Sitka and was rerouted to Wrangell. "That particular vessel got their butt kicked the week before."