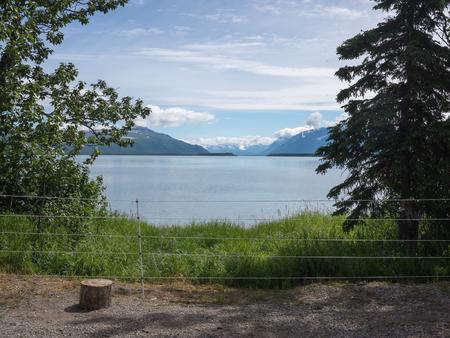 Brooks Campground is surrounded by an electric fence. Bears frequently travel along the shores of Naknek Lake to access the Brooks river. (NPS Photo.)

Juneau, Alaska (KINY) - Three men were sentenced to serve prison time and ordered to pay fines of $3,000 each after entering a closed area of the Brooks River at the Katmai National Park.

While in the river, Engelman was captured on a livestream camera taking selfies of himself in front of feeding brown bears.

The $9,000 in fines were directed to be paid to the Katmai Conservancy, a non-profit that will administer the funds to the park for law enforcement and other purposes.

In addition to these terms, each defendant is prohibited from entering any national park for one year.

“These individuals behaved carelessly and put themselves at great risk. Brown bears are fierce, territorial predators, especially when concentrated in order to feed on migrating salmon,” said Mark Sturm, superintendent of Katmai National Park and Preserve. “Things could have easily ended very badly.”