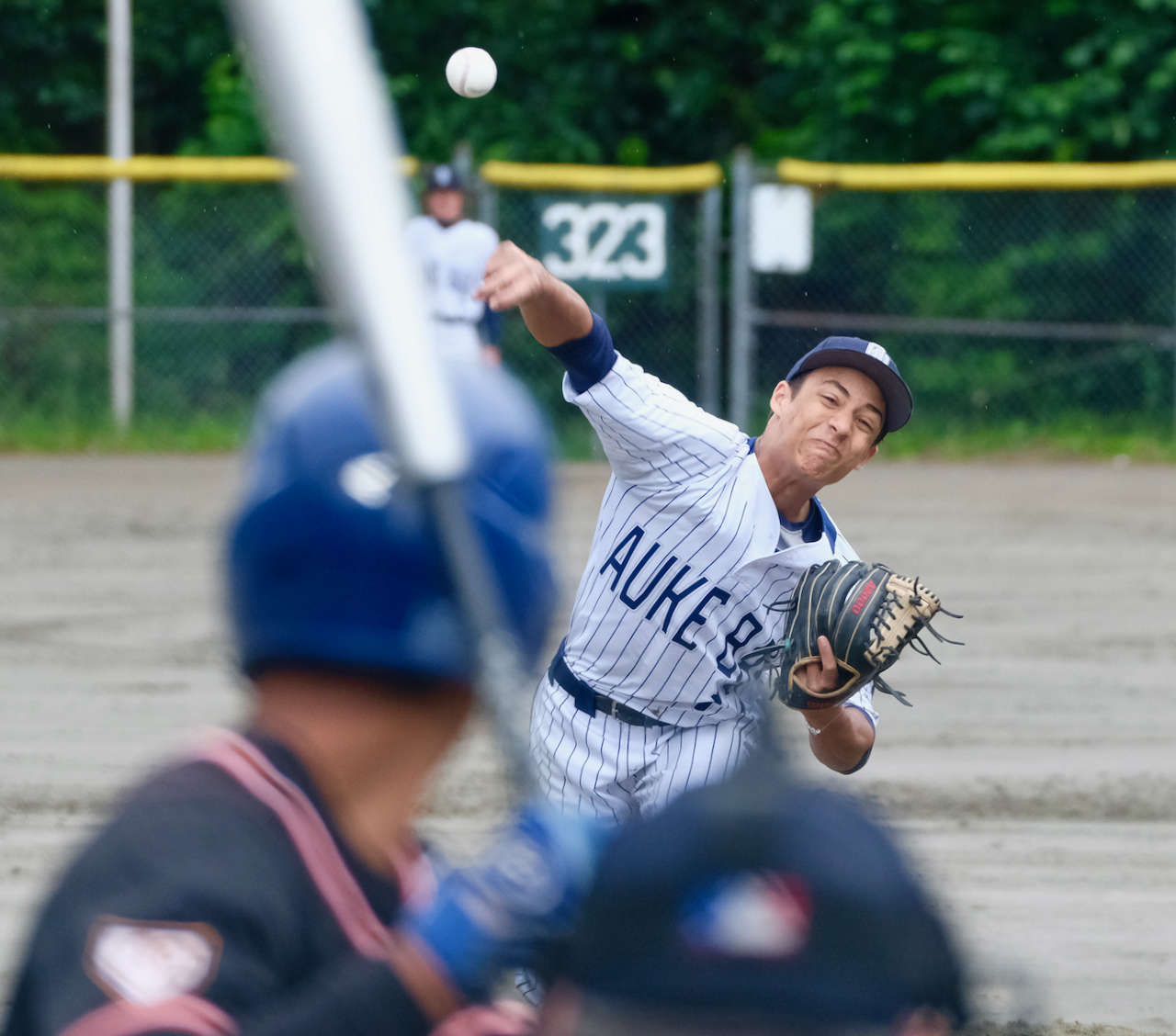 “It’s nice to get two wins, or four wins for sure, especially in the league games,” Juneau manager Chris Dillon said. “Our team is a good hitting team. They all take pride in their hitting approaches and they always put together competitive at-bats. That is really the strength of our team, scoring runs.”

With the game tied at 2-2 in the bottom of the seventh inning, Nelson put a triple to the right field fence that the West fielder misplayed and Ludeman took the next pitch through the gap at first and second for a game winning single scoring Nelson.

“I just really liked the energy and the effort all the way through,” Dillon said. “In close games like that it is all about trusting your teammates and believing in somebody coming through, and eventually Kasen (Ludeman) did… a big part of that was Christian Nelson getting to third base on that ball the right fielder dropped. That was huge to get us started in that inning.”

C. Nelson came up from the Juneau single A team to fill a stop vacated by an injury to Gavin Millard and has fit in with the battle tested AA squad at shortstop, providing strength through the infield that is backed up by centerfielder Porter Nelson, no relation.

“Christian (Nelson) has been a contributor ever since coming up,” Dillon said.

Ludeman went 2-3 at the plate with one run batted in and one run scored. He also walked once.

Oliver Mendoza went 1-2 with one RBI and one run scored and one walk earned.

“His hitting approach is second to none,” Dillon said of Mendoza. “He is rarely off balance and he usually doesn’t swing at anything he can’t drive for power. He definitely is the engine in our offense for sure."

In the Sunday nightcap Juneau broke open a 3-3 tie game in the top of the sixth inning as C. Nelson singled, Ludeman walked, Schmidt walked and Mendoza singled to score C. Nelson for a 4-3 lead.

“We were able to get into their bullpen a little bit,” Dillon said. “For whatever reason we were having trouble with their starter but he kind of ran out of gas and we were able to take advantage of the guys behind him. The guys kept working hard and eventually it paid off. We were able to string together some hits and, of course, Oliver (Mendoza) was clutch as always.”

P. Nelson followed with a base clearing triple for a 7-3 advantage. Landon Simonson hit a one-out sacrifice fly scoring P. Nelson for 8-3.

Rory Hayes singled to open the seventh inning, advanced to second on a passed ball, and two outs later Schmidt reached on an error putting Hayes on third. Hayes scored on a passed ball for a 9-3 lead as West tried to pitch around the power of Mendoza.

With a count of 2-0 Mendoza put the third pitch over the center field fence for the 11-3 lead.

The Juneau defense held in the bottom half as C. Nelson fielded a ground ball out at shortstop and Luben picked up two ground balls at third base.

Hayes went 3-3 with one RBI and one run scored.

“He hit the ball well today and that was nice to see,” Dillon said.

“I thought Kai Schmidt did a really good job on the mound today,” Dillon said. “He gave us 70 quality pitches… I thought Garrison (Luben) was good and Porter (Nelson) was able to come in for relief both games and that was huge for us as well. We only gave up a few runs in each game, that says a lot about your pitching. I thought that was a good job by those guys.”

Juneau is in the thick of the making the state playoffs despite their roster numbers falling slightly.

“It’s a weird situation,” Dillon said. “For a team with a roster of, right now we have 11 players, I feel like we are incredibly deep, oddly enough… everyone on our roster can play different positions and everybody is capable of throwing from the mound. So I think we actually have a really deep team despite the limited numbers.”

An example of the team’s depth was their use of three different players behind the plate this weekend: Schmidt, Simonson and Hayes.

“We still have a lot of work to do in this coming road trip if we are thinking about making state,” Dillon said. “We’re just going to take it one game at a time. Ideally we would like to win out but you just have to worry about the game you are playing that day. We are not looking too far ahead. We’re just trying to get a win against which ever team we are playing that day.”

Juneau manager is Chris Dillon, and coaches are Jeremy Ludeman, Joe Tompkins and Jack Schmidt. American Legion players must be under the age of 19.