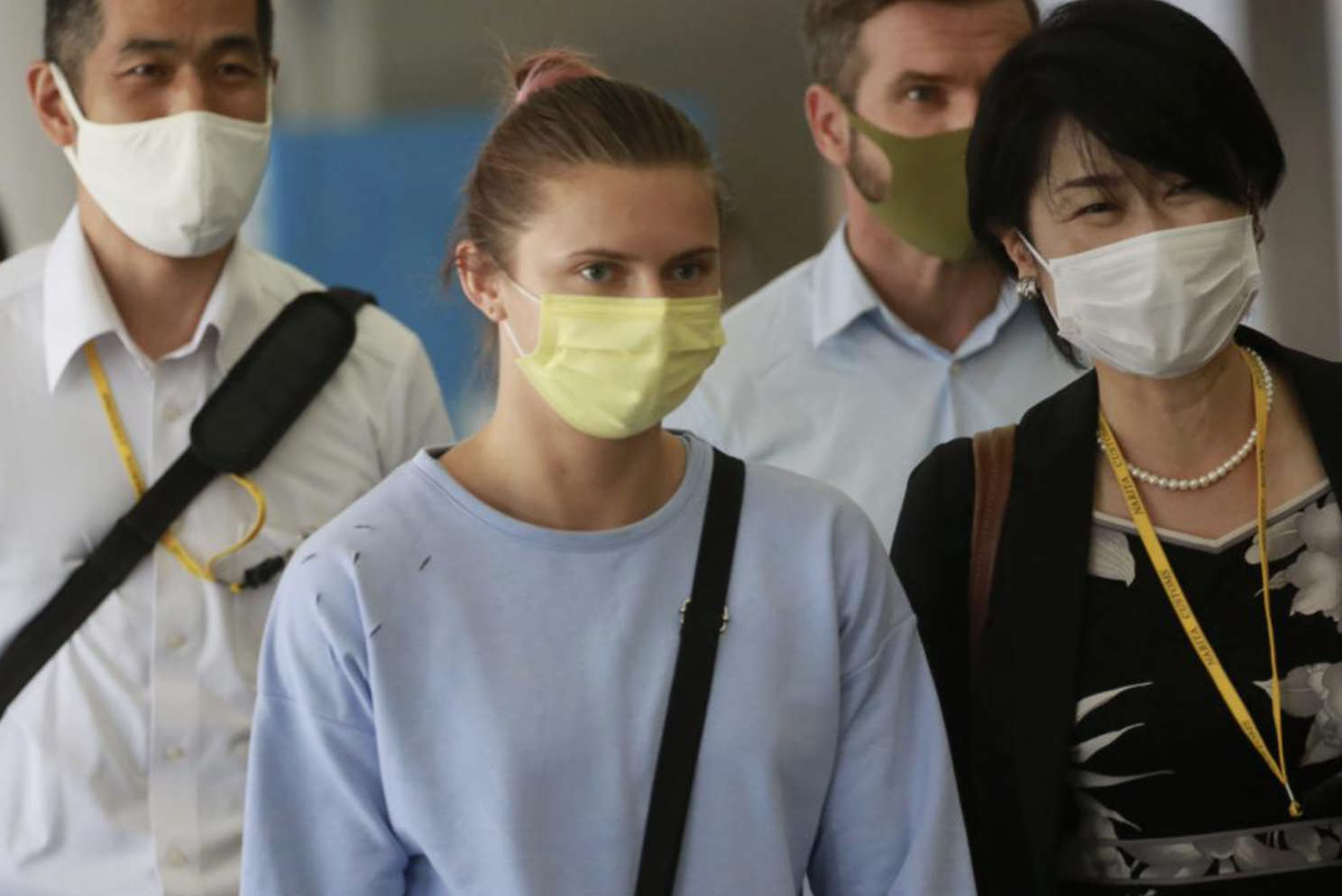 VIENNA, Austria (AP) — Belarusian Olympic sprinter Krystsina Tsimanouskaya, who feared for her safety at home after criticizing her coaches on social media, flew into Warsaw on Wednesday night on a humanitarian visa after leaving the Tokyo Olympics, a Polish diplomat confirmed.

Deputy Foreign Minister Marcin Przydacz said the 24-year-old athlete had arrived in the Polish capital after flying from Tokyo via Vienna, a route apparently chosen to confuse those who would endanger her safety. In a statement, the diplomat said he “wanted to thank all the Polish consular & diplomatic staff involved, who flawlessly planned and secured her safe journey.”

The plane that she was reportedly traveling on from Vienna was directed to a separate airport building used by government officials, and could not be seen. Passengers from the flight told reporters that one young woman was left on board as they left the plane and were put on buses to the main terminal.

In a dramatic weekend standoff at the Tokyo Games, Tsimanouskaya said Belarus team officials tried to force her to fly home early after she criticized them, and some European countries stepped in to offer assistance.

It’s not clear what’s next for the runner — either in her sporting life or her personal one. Before she left Japan, she said she hoped to continue her running career but that safety was her immediate priority. Her husband fled Belarus shortly after his wife said she would not be returning, and Poland has also offered him a visa.

“We are very happy that she is here safe,” said Magnus Brunner, a top Austrian government official, after Tsimanouskaya’s plane arrived Wednesday afternoon from Tokyo. “But she is scared about her future and about her family.”

At the Vienna airport, the runner was protected by Austrian police officers, public broadcaster ORF reported. Tsimanouskaya flew first to Austria instead of directly to Poland on the advice of Polish authorities for security reasons, said Vadim Krivosheyev, of the Belarusian Sport Solidarity Foundation.

The drama began after Tsimanouskaya’s criticism of how officials were managing her team set off a massive backlash in state-run media in Belarus, where the government has relentlessly stifled any criticism. The runner said on Instagram that she was put in the 4x400 relay even though she has never raced in the event. She was then barred from competing in the 200 meters.

She accused team officials of hustling her to the airport — but she refused to board a plane home.

The officials “made it clear that, upon return home, I would definitely face some form of punishment,” Tsimanouskaya told the AP in a videocall from Tokyo on Tuesday. “There were also thinly disguised hints that more would await me.”

The sprinter called on international sports authorities “to investigate the situation, who gave the order, who actually took the decision that I can’t compete anymore.” She suggested possible sanctions against the head coach.

Reached by phone, Dzmitry Dauhalionak, the head of Belarus’ delegation at the Tokyo Olympics, declined to comment.

The standoff has drawn more attention to Belarus’ uncompromising authoritarian government. When the country was rocked by months of protests following a presidential election that the opposition and the West saw as rigged, authorities responded by arresting some 35,000 people and beating thousands of demonstrators.

President Alexander Lukashenko, who led the Belarus National Olympic Committee for almost a quarter-century before handing over the job to his son in February, has a keen interest in sports, seeing it as a key element of national prestige.

And his government has shown it is willing to go to extreme lengths to target its critics. In May, Belarus authorities diverted a European passenger jet to the capital of Minsk, where they arrested an opposition journalist on board.

In the AP interview, Tsimanouskaya expressed concern for her parents, who remain in Belarus.

Her husband, Arseni Zdanevich, left for Ukraine shortly after the drama began. Poland has since issued him a humanitarian visa, according to government spokesman Piotr Mueller.

Amid Tsimanouskaya’s rift with team officials, two other Belarusian athletes announced their intention to stay abroad.

Heptathlete Yana Maksimava said she and her husband, Andrei Krauchanka, who won silver in the decathlon at the 2008 Beijing Olympics, would remain in Germany.

“I’m not planning to return home after all the events that happened in Belarus,” Maksimava said on Instagram, adding that “you can lose not just your freedom but also your life” in her homeland.

“Such actions violate the Olympic spirit, are an affront to basic rights, and cannot be tolerated,” Blinken said on Twitter.

While Tsimanouskaya said she hoped to continue her sporting career, she could face lengthy procedures if she wants to compete under a different flag.

Tomasz Majewski, the vice-president of the Polish Athletics Association and a former Olympic gold medalist, voiced fear that she “will lose the best period of her career” if she changes citizenship.

“These are complicated matters, we know that there will be clear objections from the home team, which will probably make it difficult or even seek the disqualification of the athlete,” he said.