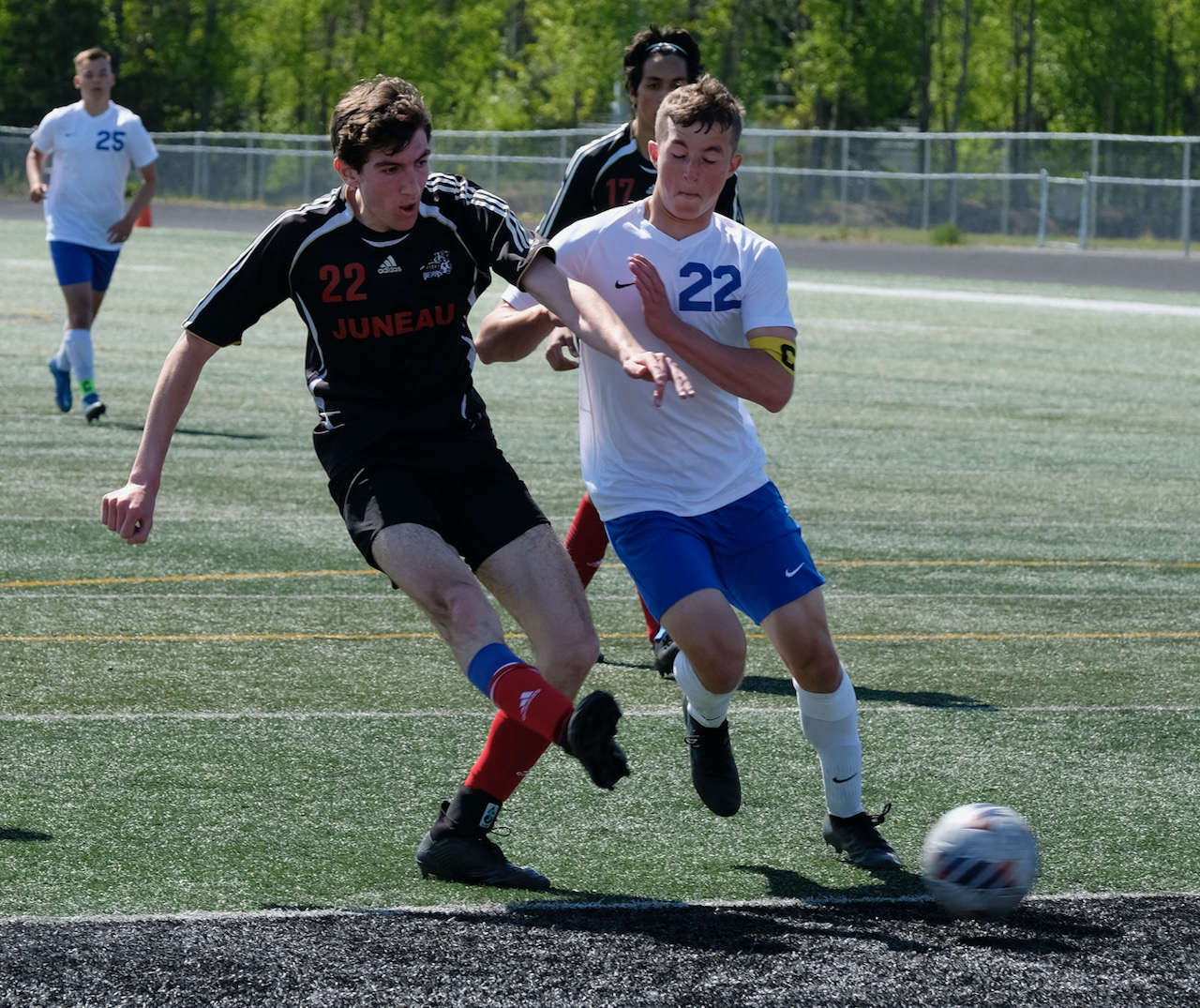 JDHS senior Tias Carney, in black, scores past Soldotna sophomore Zachary Buckbee during the Crimson Bears 5-0 win over the Stars, Thursday, at the state soccer championships in Anchorage. (Klas Stolpe/KINY)

“It felt great but it was really a team effort,” Carney said. “The guys came out and played really well today. The goals were all set up by different guys. I just ran onto the balls that were beautiful balls played to me.. Gabe (Cheng)… Kean (Buss)… Sam (Marnon) played one, just great balls through. I just had to put them into the net.”

With 10 minutes left in the first half, Carney scored again with an assist by junior Gabe Cheng.

Carney took a through pass from Buss in first-half stoppage time and hit his third goal for a 3-0 advantage at the break.

Cheng fed Carney a tastier through ball with 21 minutes left in the second half and Carney notched his fourth and final tally of the match.

Despite the importance of four goals, Carney put the emphasis back on the Crimson Bears and on classmate Solomon Alper.

Alper has been injured all season, but he still showed up for practices, still cheered his mates on and was reluctant to take the field in the final minutes.

“I said, ‘Get your name in the books,’" JDHS coach Gary Lehnhart said. “He said, ‘But I’m hurt.’ I said, 'You can do this, get your name in the books.’ I said, 'You might score a goal.’ (laughs) And he did. And the reaction was fun. The kids' reaction was just awesome. We have good chemistry, and we’ve had it all year long. It has especially been evident when the JV’s are playing, all the varsity players stay and they cheer and they root them on. Part of it is we have a small team and so we rely on everybody. Players like Solomon and Sam Marnon, Will Rehfeldt, seniors that haven’t gotten much varsity time, they’ve helped us by being at practice every day and pushing the guys…”

With stoppage time on the clock Alper scored his first career varsity goal, assisted by junior Will Robinson who lifted a ball that Alper put on his head and into the net.

“It’s such a good feeling,” Alper said. “We have such good team morale this year. Everyone is just so supportive. It is such a great feeling to be around these boys. I’m just so happy. I’ve been injured. He (Lehnhart) wanted to put me out there just so I could get a run, get me into a state championship game, and I ended up scoring. Will (Robinson) put a good ball in… I saw it… you get a connection in your head, you feel it perfectly, I just watched it, I watched it go in. Indescribable feeling. It felt so good. Definitely the highlight of my career. I’ve only been playing for two years. I only really started playing because I have good friends on the team. I never really expected to get into a varsity match, make it to state, play in a state game, let alone score a goal.”

The Crimson Bears had 50 shots on goal and the Stars none. An important reason for that statistic came from the marking work of the JDHS defenders, notably Robinson, who was awarded the team’s Lunch Pail honor.

“Just don’t let them score,” Robinson said when asked what his mindset is. “That’s what it has been pretty much this whole year. I just wanted to play out top, I never really liked defense but I have a job to do. Don’t let them score. It’s not just me. Our defense is incredible. They didn’t get a single shot, which is what you love to see. And I’m just here to help out.”

JDHS will face the Kenai Kardinals in a semifinal at 3 p.m. Friday at Service High School. Kenai defeated Ketchikan 1-0 in the opening round. Kayhi will play in a consolation game Friday against Soldotna.

Thunder Mountain plays in the other semifinal against No. 2 seed Grace Christian at 3 p.m. Friday at West High School. TMHS defeated Palmer 3-1 and Grace defeated North Pole 4-1 in opening round action.

Above - Members of the Juneau-Douglas High School: Yadaa.at Kalé soccer team celebrate a goal by senior Solomon Alper during Thursday's 5-0 win over Soldotna at the ASAA Soccer State Championships in Anchorage. (Klas Stolpe/KINY) 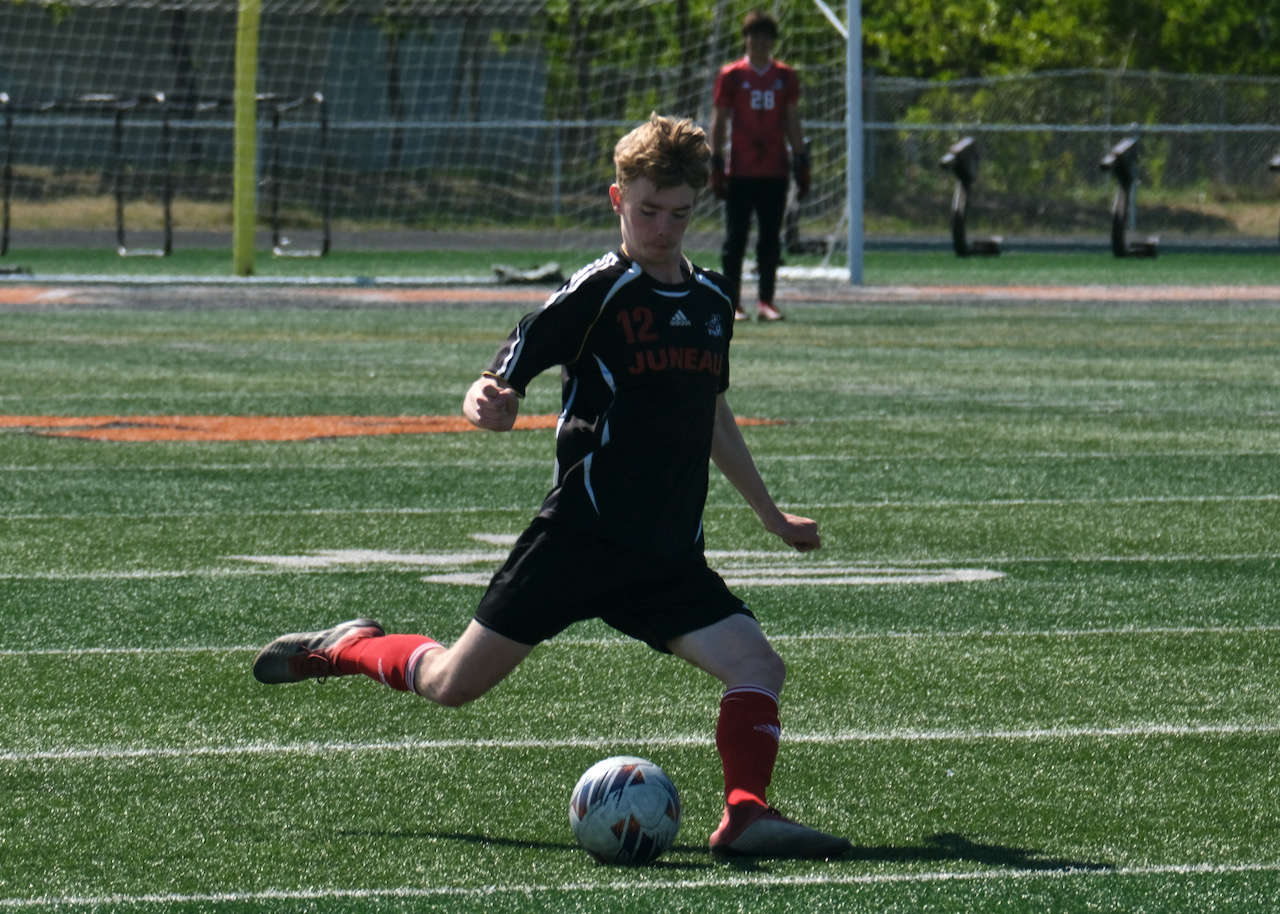 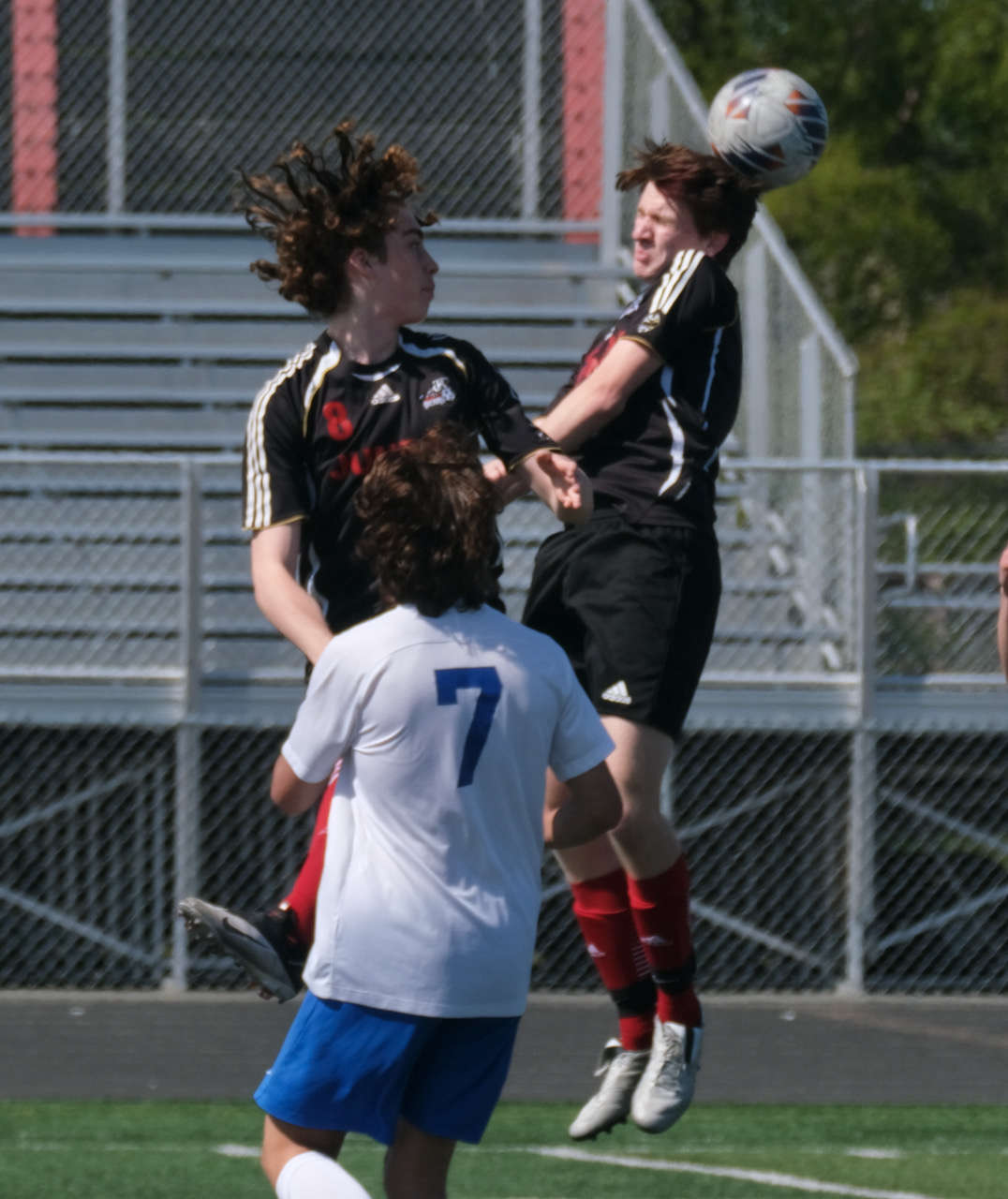 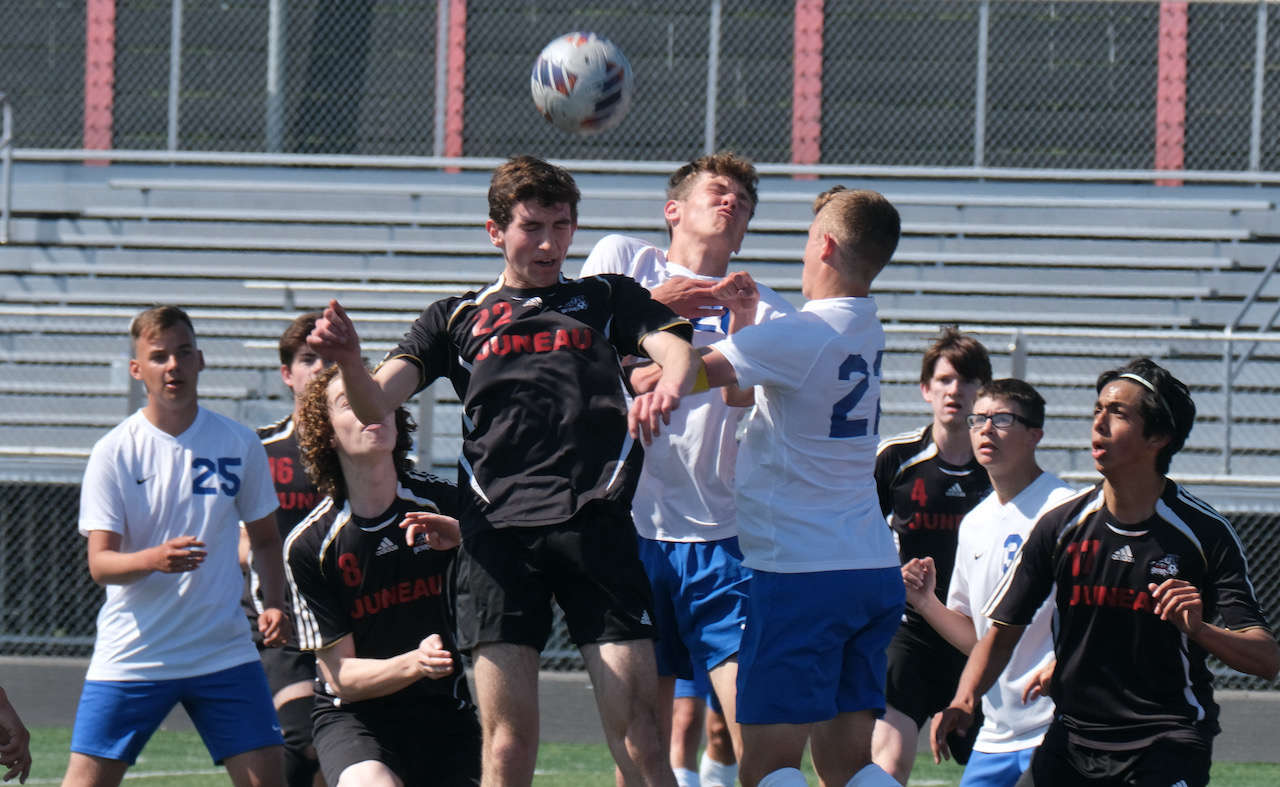