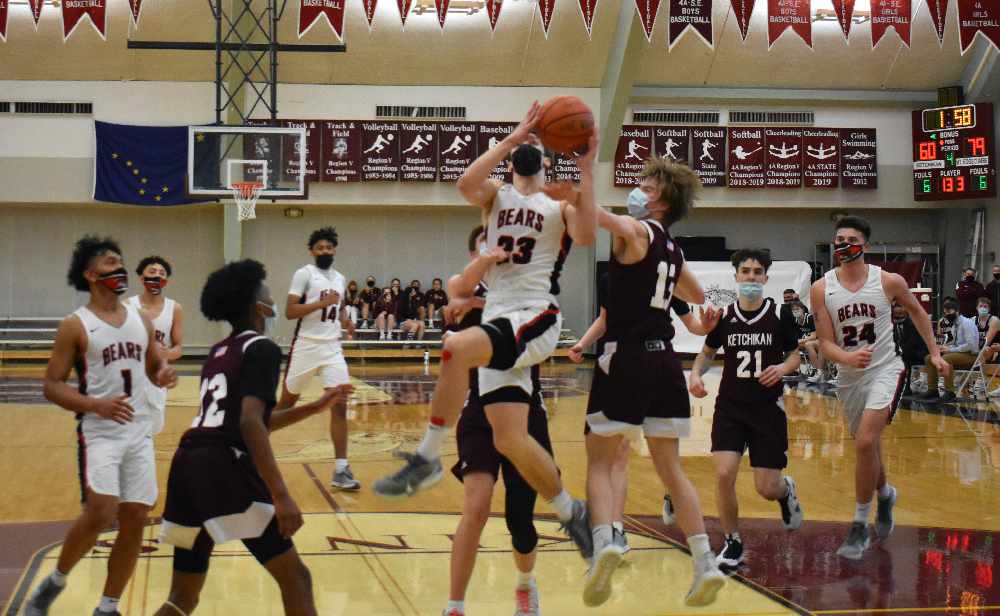 And if the Crimson Bears were kings, than senior forward Cooper Kriegmont was emperor of the court kingdom, notching a game-high 42 points in the 87-66 win. He was just two baskets shy of setting the Crimson Bears single-game scoring record of 45 points held by Jason Bavard.

“To be honest I didn’t realize I had 42,” Kriegmont said. “I went out there thinking this could be the last high school game I play. Since I was a kid, I was dreaming about playing basketball at JD and winning the region title and getting a state title. A lot of hard work came down to this game today, and I didn’t want to leave anything on the line.”

The Crimson Bears (16-1 overall, 7-1 conference, 1-0 playoffs) rode on the back of Kriegmont’s 23 first half points, including a dunk with 3:56 remaining in the second quarter, and 10 rebounds from senior Garrett Bryant, to open leads of 18-12 after one quarter and 39-22 at the half.

Kriegmont also had four rebounds and three steals in the first half, while Bryant would finish the contest with a game-high 17 rebounds.

JDHS coach Robert Casperson said the last Crimson Bears players close to that rebounding mark were record holder Carlos Boozer (20) and Eric Kelly, and rebounding for this version of the Crimson Bears was needed due to a recent injury to senior All Conference selection Brock McCormick who was averaging 18 points per game.

“I would have left him in the game if I had known he was that close,” Casperson said of Bryant. “At 20 rebounds, I have to buy him a steak dinner. He is really impressive. I think Malakai (Nichols), Lope (Elizarde), and Raekwon (Razor) really stepped up in Brock’s absence and took on bigger roles. Tias (Carney) had to step in and played really nice defense. We got some great stops and we limited them to one shot with our rebounding. Ketchikan has a lot of fight in them, they did not give up.”

The Crimson Bears opened a 25-point lead after three quarters thanks to six straight points from senior Razor off the bench, and a jump shot by senior Nichols at the buzzer, his 10th point of the quarter.

Ketchikan sophomore Clayton Oldstad hit back-to-back three point shots with 5:50 remaining in the game, cutting the JDHS lead to 23 points, but the Crimson Bears responded with a pair of Bryant free throws and a Kriegmont score.

Ketchikan (13-5 overall, 4-4 conference, 1-1 playoffs) outscored JDHS 31-25 in the fourth quarter. Senior Tyler Slick and Oldstad hit back-to-back three-point shots to close within 19 points, 76-57, with 3:17 remaining to spark another rally attempt. Oldstad would connect on five three-point shots in the quarter, scoring 15 of his team-high 21 points, but time would favor the Crimson Bears.

“That was a buzz saw,” Ketchikan coach Eric Stockhausen said. “We knew going into the season that they had eight seniors and we were swinging with a bunch of 15-year-old kids. Juneau came out and played well and we had no answer for Cooper at all. Copper is a first team All-State player, no doubt and he just showed why. We tried to stem the tide as many times as we could. We got into foul trouble early.”

“That shows how aggressive around the basket they were,” Stockhausen said. “If you don’t attack the basket you won’t get fouls called.”

The JDHS starting five has been playing basketball together since third grade.

“We have been growing up playing basketball together our whole lives,” Kriegmont said.

Kriegmont said his teammates always have his back.

“I appreciate knowing they will be there for me,” he said. “I can just go out there and play basketball. We have had some harder seasons in the past so it was good to see everyone happy.”

Juneau School District Superintendent Bridget Weiss on Sunday cited COVID-19 concerns in saying Juneau teams would not be approved to travel to the state tournament whether they had qualified through a region tournament championship or an at-large bid. The ASAA March Madness Alaska 2021 Basketball State Championships on March 25-27, are hosted by the Matanuska-Susitna Borough School District at Palmer, Wasilla, and Colony high schools.