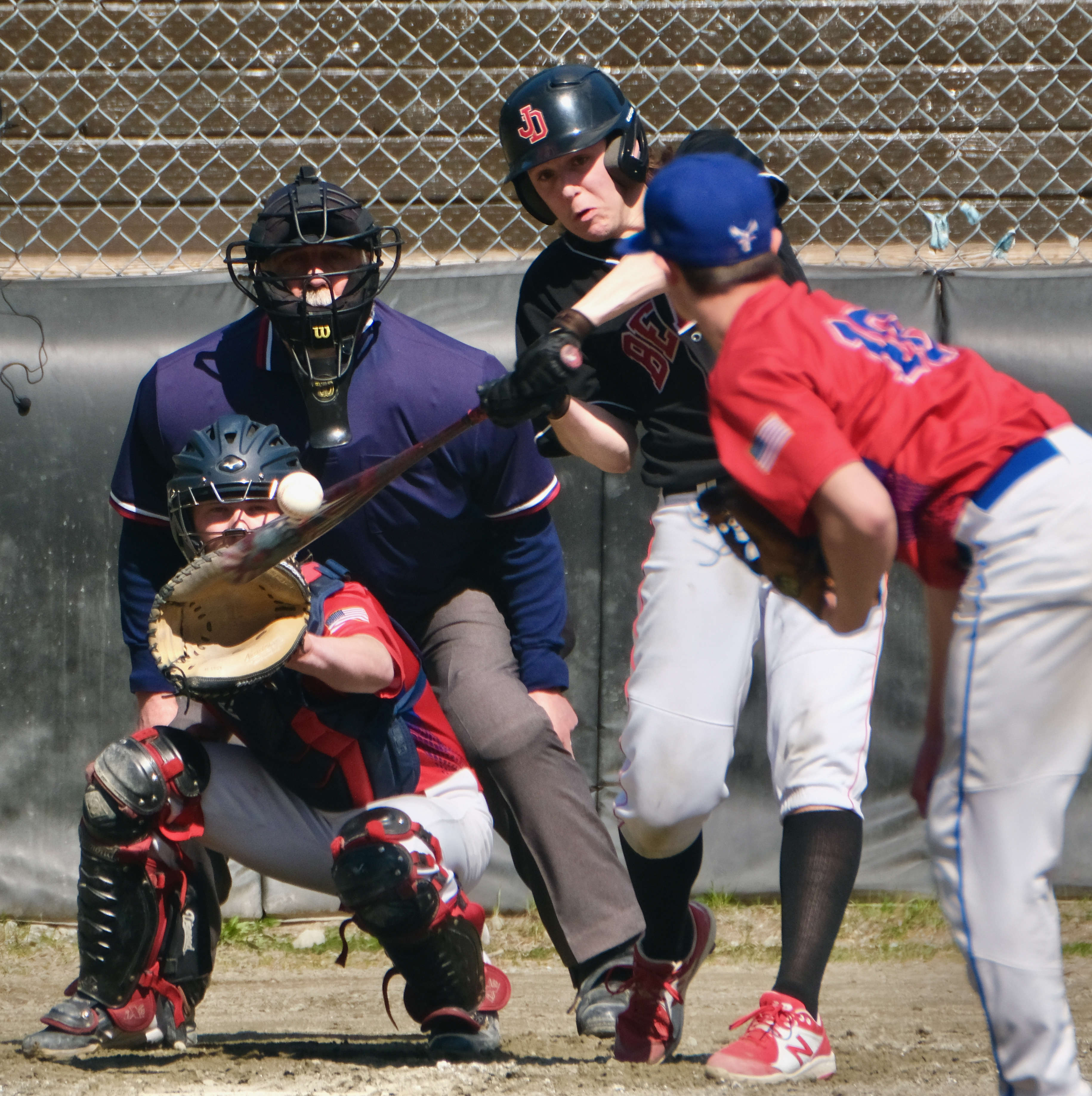 JDHS junior Derrick Schauwecker connects for a hit against Sitka during the Crimson Bears 12-5 win over the Wolves, Saturday, at Adair Kennedy Field. (Klas Stolpe/KINY)

“We came out and we tried to get on them quick,” JDHS head coach Chad Bentz said. “We had a good approach at the plate, as a team, a good strategy in just trying to be aggressive but not help the other team out…We took advantage of their mistakes. They made a lot of mistakes and we took advantage of it, and good teams do that…”

“Kai (Schmidt) battled, and he always does,” Bentz said. “He hasn’t been as sharp as he has in the past but we’re going to work on that and I am not worried about it. But it’s important, it’s giving other guys opportunities and Marcus (Underwood) came in and got his first win of his high school career…”

JDHS junior Derrick Schauwecker had a big day at the plate, going 3-5 with four runs batted in and one run scored.

In the Saturday nightcap, JDHS trailed 7-6 heading into the bottom half of the sixth inning and Schmidt earned a walk, stole second base, tagged up on a deep sacrifice fly to right field by Soto to reach third base and scored on a sacrifice fly by Mesdag to tie the score at 7-7.

Sitka scored two runs with two outs in the top of the seventh inning as Keadon Blankenship singled and Grady Smith hit a home run for a 9-7 lead.

JDHS’ Campbell led off the bottom of the seventh being hit by a pitch and Aline earned a walk. Crupi then hit a ground ball error that Sitka intensified into two runs for the Crimson Bears, tying the score at 9-9.

Crupi was sacrificed along to second base by Blatnick and sophomore Landon Simonson lined out on hard contact.

Schmidt and Mesdag then earned consecutive walks to load the bases and Nelson earned another, scoring Crupi for the walk-off 10-9 win.

Campbell led JDHS bats, going 2-3 with one RBI and three runs scored. Crupi had three RBI, Luben two, and Mesdag and Nelson one apiece. Mesdag, Nelson, Schauwecker, Luben and Crupi had one hit each. Crupi scored two runs, Mesdag, Nelson, Aline, Blatnick and Schmidt one each.

“That was not a very pretty game at all,” Bentz said. “But those games happen and we didn’t throw in the towel and we battled back. We put the ball in play and we took advantage of their mistakes and we were able to pull out a win when we probably shouldn’t have. But good teams take advantage of other teams mistakes and that is what we did. So we are going to enjoy that and we have a lot of work to do on Monday. We always have things to work on… I told them, ‘A win’s a win, it looks the same in the scorebook.’ So we are just going to enjoy this, rest up and then have a good week of practice starting on Monday, then we play Thunder on Thursday.”