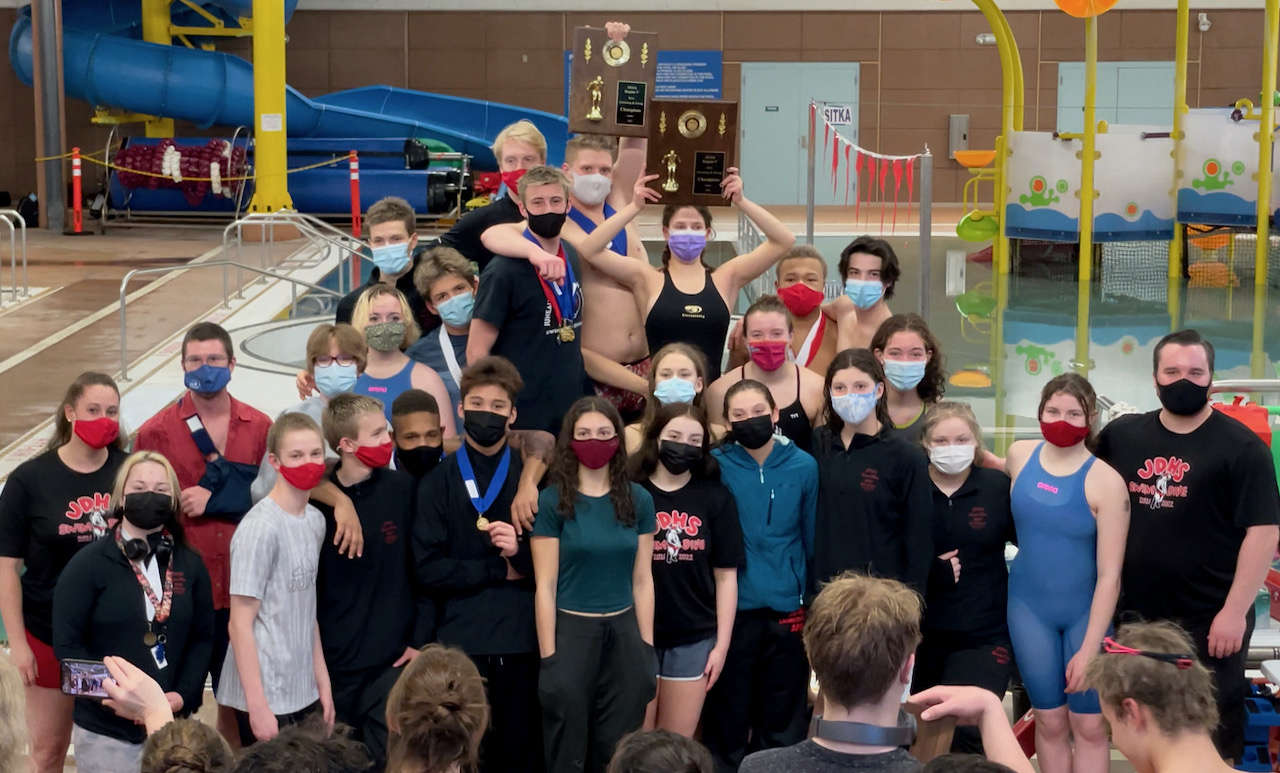 Juneau, Alaska (KINY) - The last time the Juneau-Douglas Yadaa.at Kalé Crimson Bears won both the boys and girls Region V Swim & Dive Championships was in 2007 and Seth Cayce finished among the leaders for the boys, Amber Kelly was part of a top state girls team and Nathan Teal was medaling on the diving board. Fourteen years later, those three are coaches of the 2021 Region V Champion Crimson Bears boys and girls swim and dive teams. JDHS outpointed the competition on Saturday in the Region V Championships at Ketchikan.

“It was pretty cool to see them do it this weekend is pretty cool,” Cayce, the JDHS head coach, said. “Nathan and I were just talking about that. I think probably the coolest part is we were swimming when that last happened and now we’re the coaches. But this group of kids is pretty talented, I wouldn’t be surprised if, on average, they had better times than we did back then.”

Key to the titles were relay wins.

“The relays are really big as they are worth double the points,” Cayce said. “Going in I knew we could stack some relays, basically put the four fastest swimmers on. I knew we could probably win two on both the guys' and the girls' sides. The biggest thing, really, is it comes down to the relays in these championship meets. We won two and Thunder Mountain only won one. That’s definitely a big part of it.”

Three JDHS swimmers won both of the individual races they were entered in.

“It’s a team effort, it really is,” Cayce said. “Especially since we won by 15 points for the boys and 17 for the girls. It takes everybody. When you rack up a ton of those fourth, fifth, sixth, seventh place finishes, those can make a difference over the course of the meet. If a couple people weren’t here we might have been talking about a different outcome. The first place finishers get a little more recognition but it truly is a team effort. All those fourth through sixth places add up and we had a lot of those today. They deserve just as much credit as the folks that won.”

“All our swimmers were great,” Cayce said. “But the one I was impressed by the most was probably Samantha Schwarting. She’s obviously one of our top end swimmers but the times she put up today, I knew she was capable of them but I didn’t expect them at this meet. She was in the state taper group so we want her to be peaking next week, but she crushed all of her best times. Her 500 time is the second fastest in JDHS history which is pretty cool. Her performances were pretty impressive, but they all swam great, just hers stood out.”

A message seeking comment was left for the coach of the Thunder Mountain team.

The state swim championships are Friday and Saturday at Anchorage’s Bartlett High School.