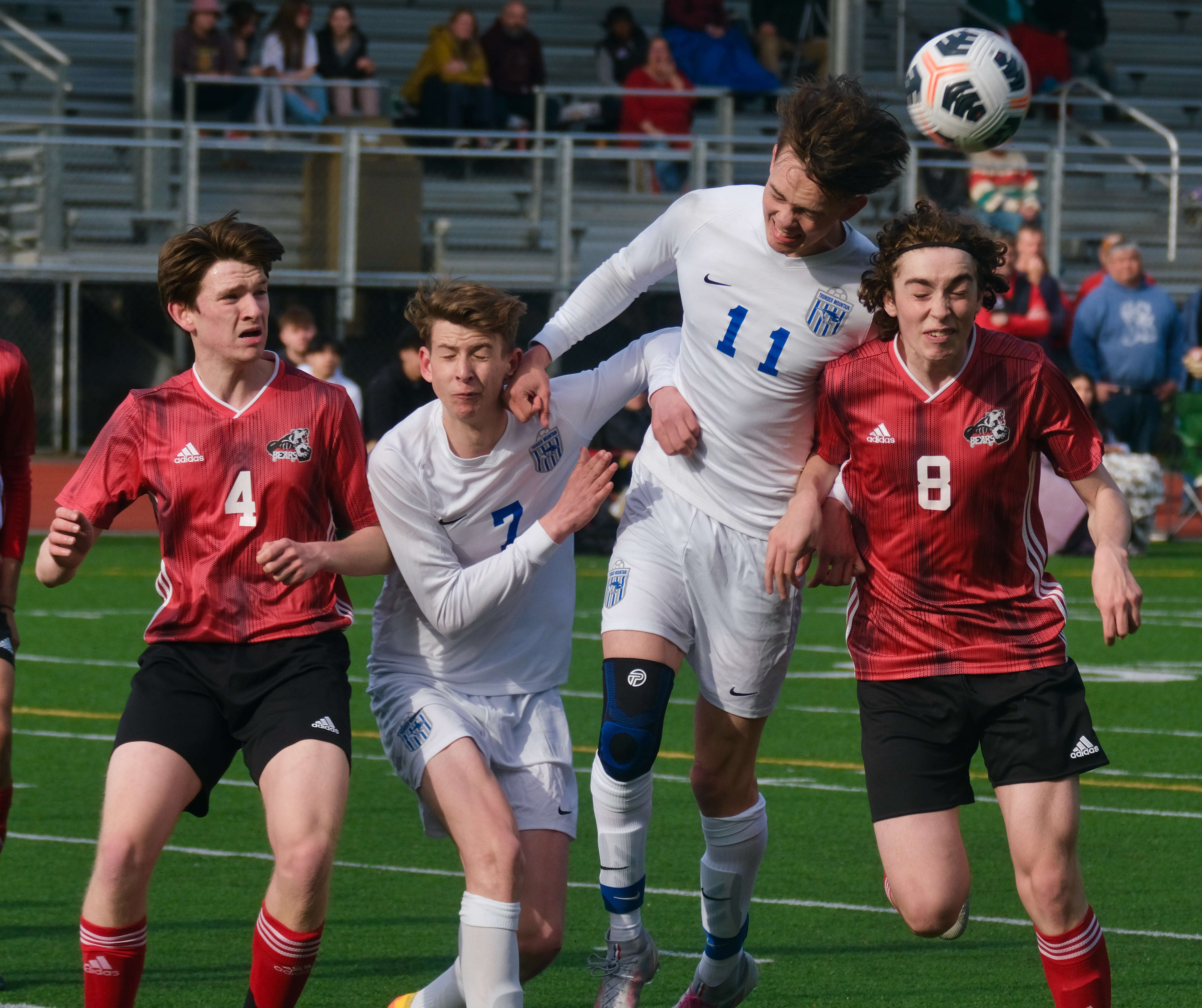 “I’m proud of them,” JDHS coach Gary Lehnhart said. “To beat Thunder Mountain twice in the regular season is what we set out to do so that is a good goal to accomplish. It’s a good side. They looked really good against Ketchikan, and we came in and took away their game…”

Thunder Mountain continued their strong attack game that resulted in a 4-4 draw in the last derby between the two schools and their two recent wins against Ketchikan, with two shots on goal in the first four minutes.

JDHS would gets shots attempted by senior Andre Peirovi and freshman Kai Ciambor early and corner kicks by Ciambor and junior Gabe Cheng.

TMHS had early shots on goal by senior Talon Briggs

“They definitely have put their strongest players up front,” Lehnhart said. “We need to take advantage of that. I thought we defended really well the whole game…”

The Crimson Bears had a run through the pitch that ended with a shot on goal being battered about the box until senior Tias Carney touched the ball to junior Micah Brown for a 1-0 lead with 14 minutes left in the first half.

JDHS’ Ciambor was brought down on a run and earned a free kick from 20 yards out that curved enough to hit the side bar and go in for a 2-0 Crimson Bears lead just before the first half ended.

“I have the roll to take all the free kicks on the left side because I can take set pieces really well,” Ciambor said. “So Gary (Lehnhart) gave me the look and I took it and scored… I think this shows how good of a team we are. Last game we were injured and we had a bunch of pieces out but we are back and healthy and we got it done.”

“Just try and keep up with the players and stick with them when they are pushing,” Schijvens said. “They always stay really strong on you and you have to make sure you stick with them… just try to be as good as the next guy. We are all working really hard and Will (Robinson) here is really fast and sticking with their best attacker most of the time so I try to mock what he does and stick with whoever else is there.”

Robinson said, “Well, Zayden (Schijvens) is giving me too much credit. We’re out there as a team. We know that they are strong up front so we just try to match their energy, first to every ball and we got it done.”

JDHS got a quick goal to start the second half as senior Samuel Holst scored with 38 minutes remaining in the game on an assist by Ciambor for a 3-0 advantage.

TMHS went a man down as sophomore Owen Adams received a second penalty card and was sent off the pitch with 33 minutes remaining, but the Falcons picked up their intensity a notch.

TMHS senior Wallace Adams struck from 30 yards out to put the Falcons on the scoreboard with 22 minutes remaining.

“I think we have to keep our pace and our intensity high,” Wallace Adams said. “We just came off a good week of wins and we thought we could just come here and steamroll them. That is not how it works at all. This is a tough conference. Southeast is probably the top conference in the D-II division and we have to treat every game like it is the most important game of the year, because in the end, they really are. All I have to say is our road to success just got a lot more obstacles in it…”

The Falcons continued to push the action through the final minutes with two shots wide by Briggs and senior Phillip Lam and three Lam corners. But the JDHS defense, including freshman keeper Ahmir Parker, did not allow another ball in the net.

The Falcons’ Lam struck a shot off the top bar of the JDHS net with five minutes left and had a corner in stoppage time that was covered.

“Tough, tough result,” Lam said. “JD is a really good team but we are also a very good team. We have to go back to the drawing board, I guess…”

The win gives the Crimson Bears an edge in the Southeast Conference standings for the lone, outright berth to the state tournament. An at-large bid will be chosen from across DII state conferences.

“It was very important to win this game,” JDHS’ Carney said. “But we still have a lot to improve. We struggled at the end. TM did a great job. They put their foot on the gas after they lost a man. It was a really important win and we’ll just move forward and play our best next game versus Kayhi at home.” 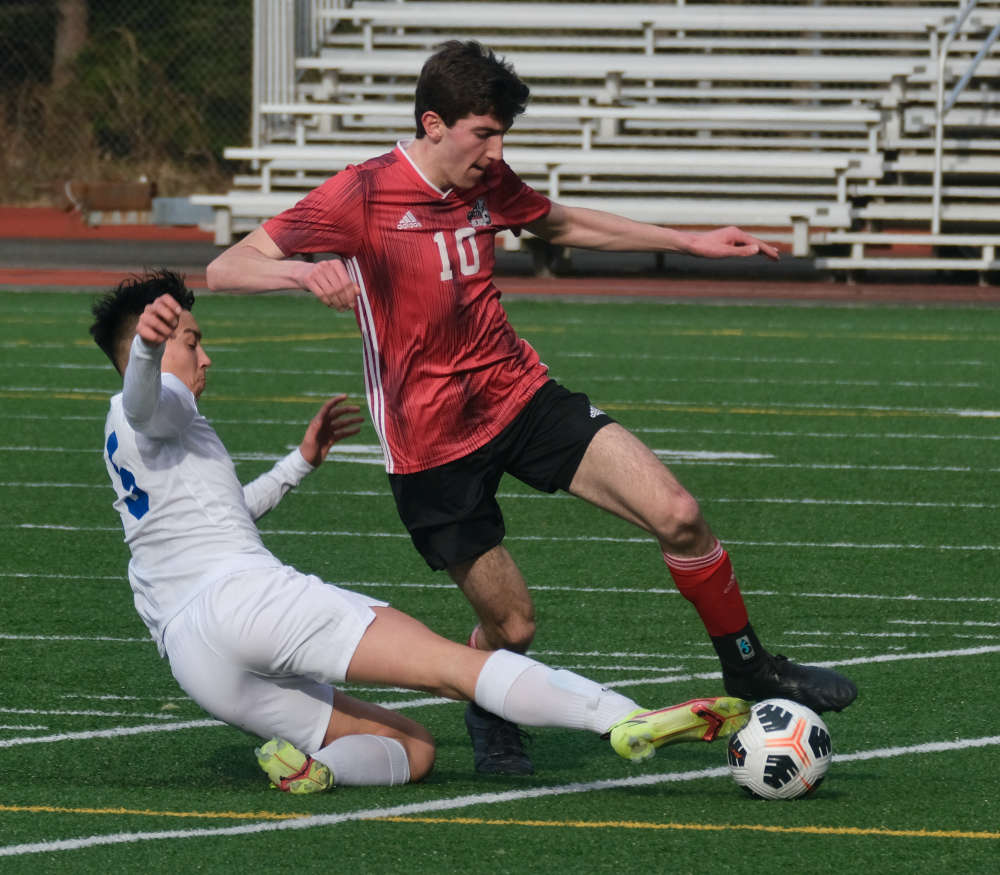