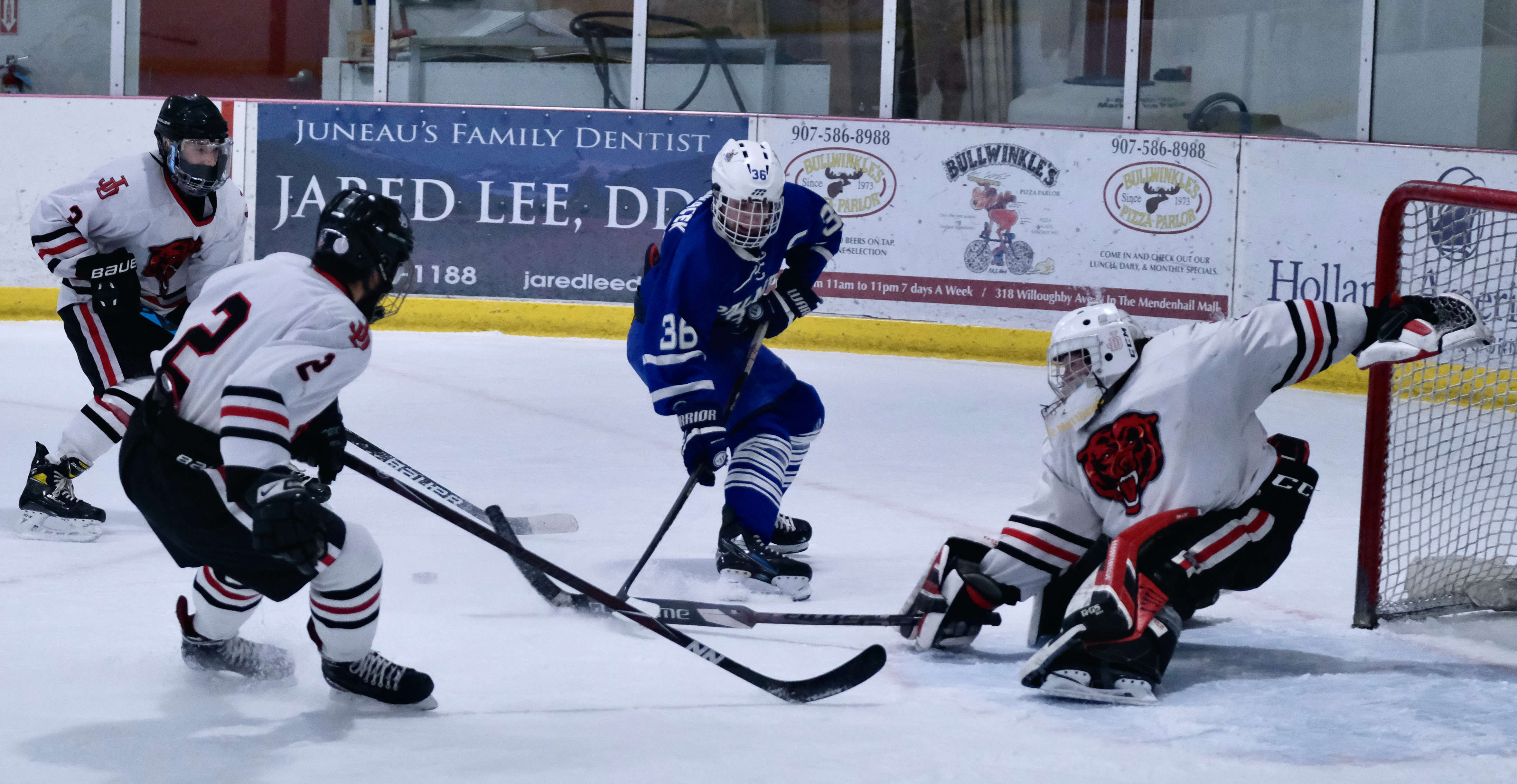 Juneau, Alaska (KINY) - Juneau-Douglas High School: Yadaa.at Kalé junior hockey goalie Brayden Baxter was a bright star on the Treadwell Arena ice for the Crimson Bears on Tuesday, stopping 33 shots and giving the home team a chance to win. Unfortunately the Crimson Bears could only put 22 shots against the Palmer net and a last minute score gave the Moose a 3-2 sweep.

“Night and day from yesterday,” Juneau-Douglas coach Luke Adams said. “We put everything out there today and came up one goal short but we are really proud of the way the kids bounced back. It was a better game all around.”

The Crimson Bears had lost a 4-2 physical match on Monday to the Moose. On Tuesday the team skated like they practice.

“We were disciplined,” Adams said. “Everybody made adjustments. I don’t think you have to be a hockey person to have seen that or felt that. Still hurts for the kids knowing that they didn’t get the win but at the same time as coaches we are very proud of them and their effort and they way they bounced back today. Because we feel it was a complete bounce back from yesterday.”

In the first period Baxter covered the net using every style known in the crease. He butterflied around low shots, was a hybrid high and low, went stand up style and was aggressive in stopping a perfect 16 for 16.

In the second period Palmer found a lapse as JDHS was just coming off of a man down to full strength and Moose junior Gavin Gore slipped a shot in for a 1-0 score. Assisting were seniors David Wilson and Carter Greco.

JDHS tied the game with 46.3 seconds remaining in the second period on an unassisted goal on a blue line slap shot by sophomore Camden Kovach.

JDHS’ Baxter and Palmer’s Horaceki both had eight saves in the stanza.

Palmer took the lead at 9:58 of the third period on Gore’s second goal, assisted again by Greco and Wilson, as the puck was moved from a face-off down ice.

JDHS tied the score again at 2-2 on a face-off as the puck went in front of the net and sophomore Caden Johns scored a dirty goal with 5:35 remaining to play.

An unfortunate bounce put the puck near the JDHS goal with 1:05 left to play in the third period and Palmer senior Rhys Allen put the shot in.

Both JDHS’ Baxter and Palmer’s Horaceki had nine saves in the third period.

Adams said Baxter and classmates Ian Murphy and Lydia Ploof, sophomore Mason Sooter and freshman Caleb Friend all battle for the team in the net.

“For Brayden, last year he didn’t get any or many games,” Adams said. “So this is all learning experience but he really showed up for us this weekend. We’re very proud of him. He definitely kept us in those times where we were just bogged down with pressure. That’s all you can ask from a goalie. And the players responded and we are really proud.” 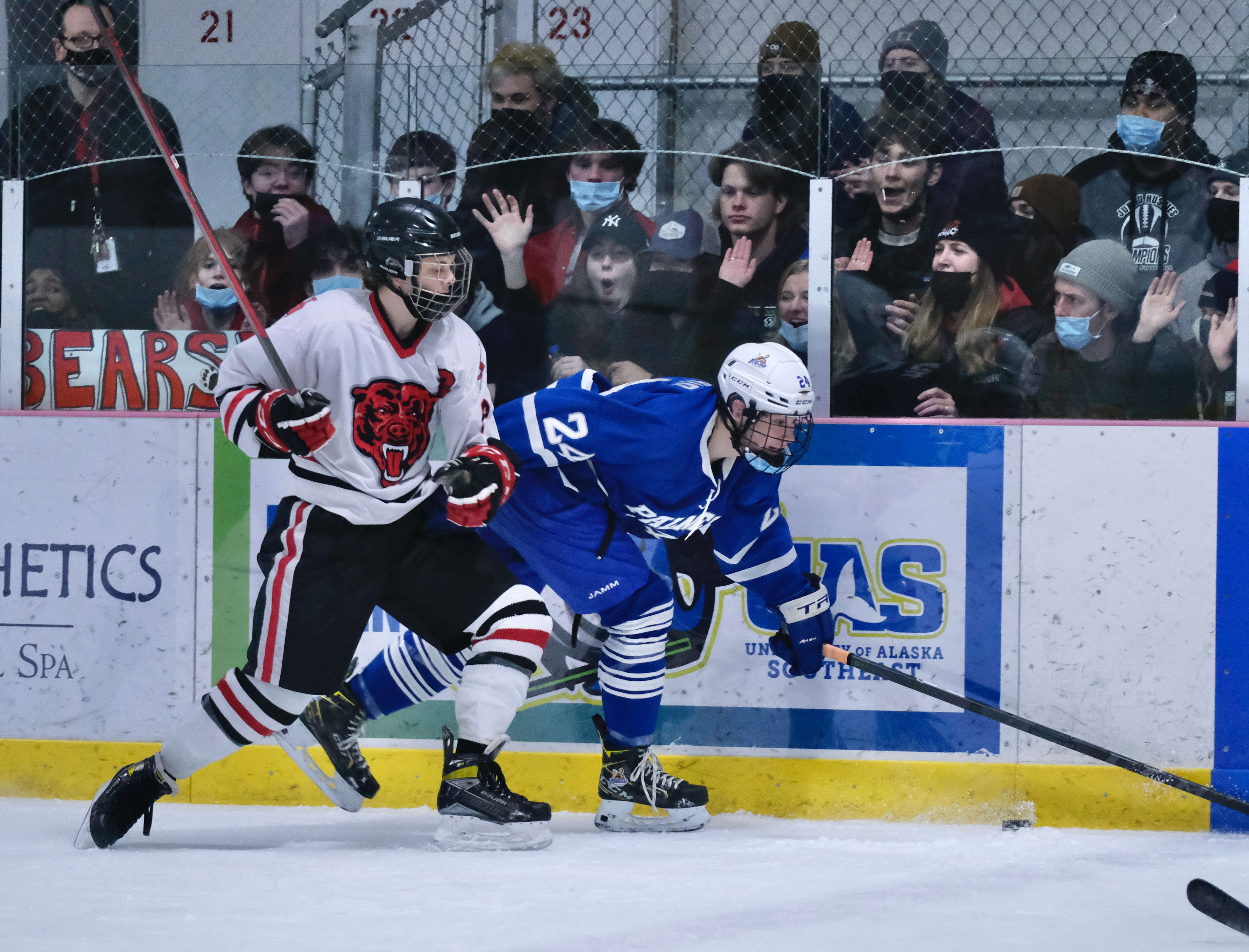 Above - JDHS senior Sam Bovitz and Palmer senior Bradford Heard (24) for a puck in front of the Crimson Bears student section during Tuesday's 3-2 Crimson Bears loss to the Moose. (Klas Stolpe) 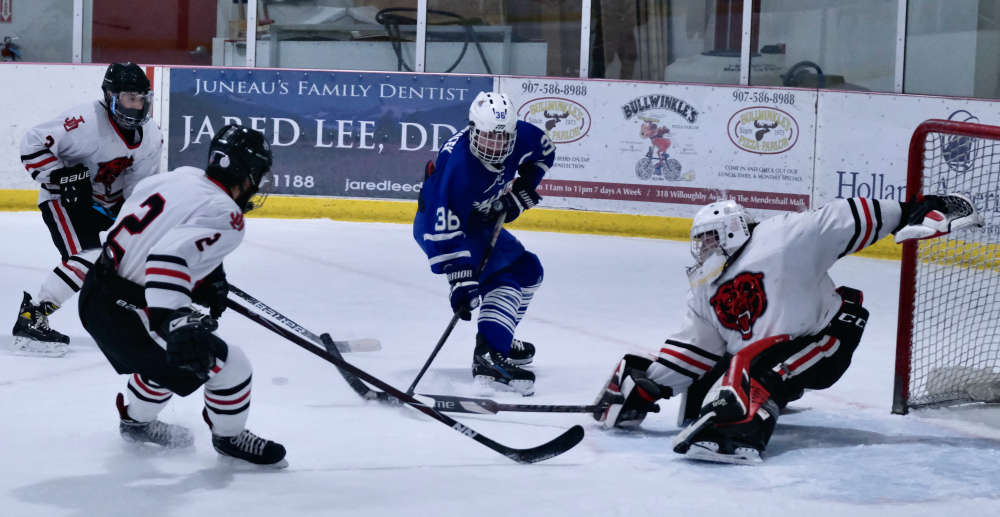