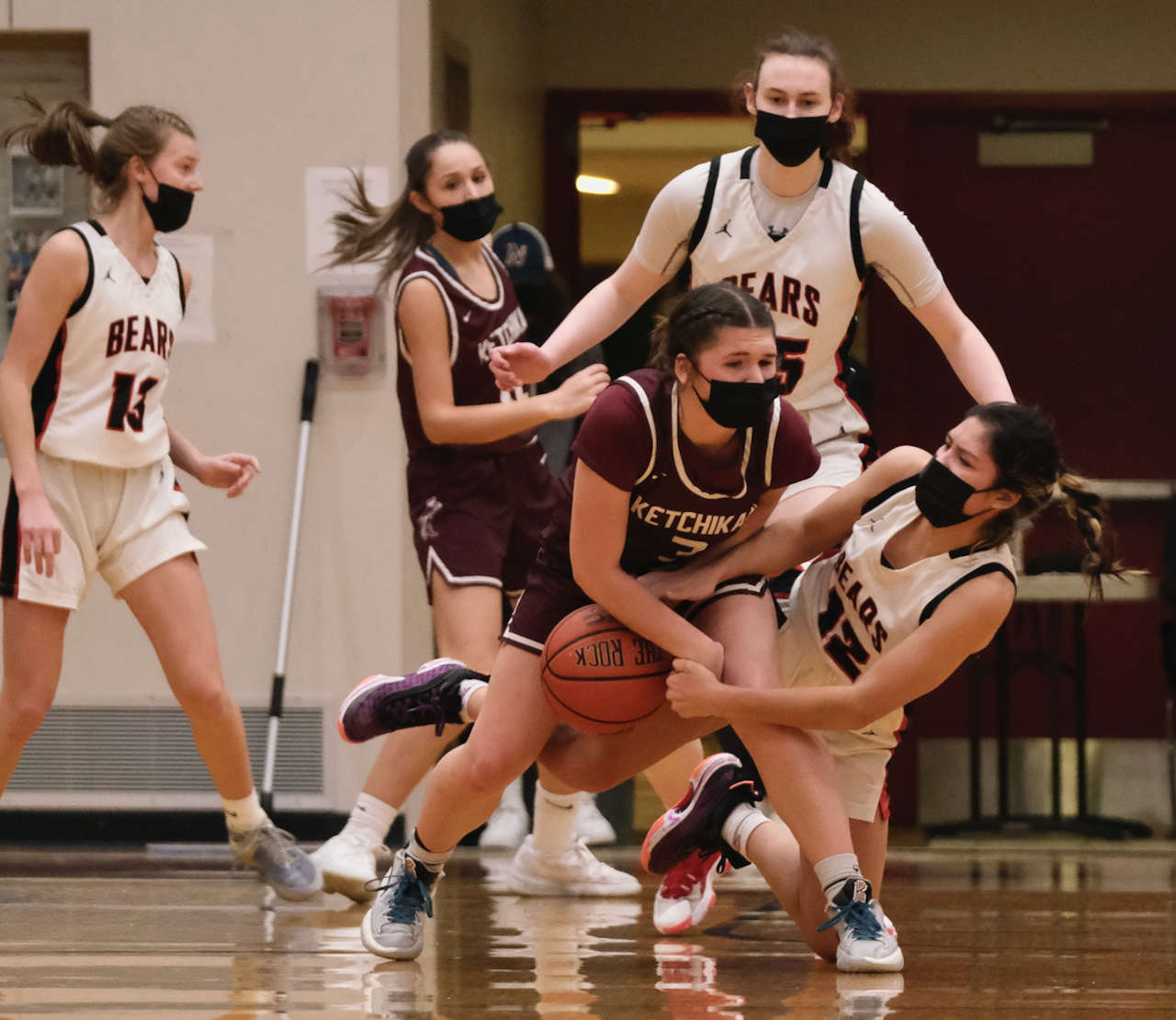 “I thought it was really exhilarating,” senior Trinity Jackson said. “It ended kind of bitter but it is just going to help us play them again next time because now we know how they play so we can plan ahead and make sure we are ready. Going into it we were really nervous because we lost to them last year so we were like, ‘oh they’re a really good team.’ But I think now we realize that we can catch up to them and they are not that far away.”

Ketchikan senior Paige Boehlert and sophomore Bree Johnson put the Lady Kings up early 4-0 but Jackson countered with a steal and a basket for the Crimson Bears.

Juneau-Douglas would lose junior Ashley Laudert to two quick fouls in the opening minutes of action. Laudert had been instrumental in Friday’s game with six blocks and eight rebounds.

“I think volleyball definitely has a lot of help with that,” Laudert said. “We focused a lot this year on learning how to block and it is just translating really well into basketball so far for me. And the court awareness has definitely helped a lot and that has definitely improved from the last two years.”

A steal by JDHS junior Skylar Tuckwood led to a basket by sophomore Mila Hargrave who had come into the middle replacing Laudert.

Johnson answered for Ketchikan with her second deep shot of the quarter for a 12-4 lead but Jackson hit two free-throws for the Crimson Bears to cut the lead to 12-6 and end the stanza.

Ketchikan’s Rhoads tied the game and Johnson stole a pass and scored and Boehlert hit a deep shot past the arch for a 21-16 Lady Kings lead.

JDHS’ Jackson hit a shot to close the gap to 21-19 heading into the half.

“We can absolutely play with Ketchikan,” assistant coach Jasmine James said after the game. James and Nicole Fenumiai are filling in for head coach Steve Potter. “I think we came in kind of scared that first night and realized after that we can really play at that same level and that we need to be more aggressive on offense. I think we really did that tonight to show that we can look for those open shots and we can drive to the basket against this team. Defensively we were pretty pleased with our girls because they worked really hard. To have a score like that means that we played really tough defense.”

The tough defense was even more evident in the second half.

Ketchikan pulled out to a 27-19 lead on a basket by senior floor general Shaelyn Mendoza and two more scores from Rhoads inside.

The Crimson Bears clamped down on the pressure with 1:33 remaining in the stanza and junior Kiyara Miller and Tuckwood scored on layups and Miller added a free-throw to trail by three, 27-24 after the third quarter.

Laudert resurfaced in the opening of the fourth quarter with a blocked shot for JDHS but Ketchikan’s Mendoza controlled the ball and forced the Crimson Bears into multiple fouls.

Mendoza also had a blocked shot, a steal, and fed Boehlert for a 29-24 lead.

“I didn’t even know I was going to do that,” Mendoza said of her blocked shot. “It just happened. I just saw her behind me and the ball just hit my hand. Coming here I wasn’t nervous until I got here because they are a pretty tall team. I knew that they could beat us but I was pretty confident in my team too. When we got here I was confident, but still nervous.”

JDHS’ Jackson picked up her fourth foul with six minutes left but responded with a steal and fed Grube for a score to cut the lead to 29-26.

JDHS’ Laudert blocked her third shot of the night. The ball fell back to Ketchikan but Tuckwood stole it back and scored on a layup to cut the lead to one, 29-28.

Another steal by Tuckwood led to Grube being fouled and she sank two from the charity stripe for a 30-29 Crimson Bears lead.

Laudert would pick up her fourth foul with 3:33 remaining and Ketchikan’s Johnson hit one-of-two charity stripers to tie the score at 30-30.

Tuckwood hit from deep past the arch to give JDHS the 33-30 advantage but Ketchikan’s Mendoza answered with a full court dribble drive score to trail 33-32. Mendoza then stole the ball and scored for a 34-33 Ketchikan lead.

Jackson would pick up her fifth foul on JDHS’ next possession and leave the game with 2:04 remaining.

“It was really hard,” Jackson said. “It’s senior year, you want to win everything. That’s just everyone’s dream, you just want to win. But I think we just lost our intensity and got timid again. I feel like the momentum just died down a little bit and we took a breather.”

Ketchikan’s Rhoads hit both free-throws for a 36-33 lead and Mendoza grabbed her sixth steal of the game and scored for a 38-33 advantage.

The Ketchikan pressure forced another turnover and Mendoza pushed the ball up court and drew the fifth foul from JDHS’ Laudert with 45 seconds left.

“I guess it was just that a lot of our girls were out this weekend so I just thought I might have to step up a little bit more,” Laudert said of her defensive play on the weekend. “We are filled with juniors and seniors this year. This is my third year being a starter for varsity so I thought I might as well step up and play and act like the seniors are.”

Mendoza hit one-of-two from the line for a 39-33 Lady Kings lead.

Miller drove to the key and was fouled as her basket went through for JDHS’ final points. The free-throw would not fall and Ketchikan moved the ball to Johnson who was fouled and hit a free-throw for the final 42-35 score.

“It was great for us as a team,” Ketchikan coach Kelly Smith said. “It is kind of the roller coaster we are on. Juneau’s pressure was great. It was physical, but it was great pressure that is going to get us better. Early in the season you know what you need to go work on. I thought coach Fenumiai did a phenomenal job with her kids. In both games there were a couple times where we got up 12 or 14, in that area, both nights, and she had her kids ready to fight back. She did a really nice job. We learned that we have to get some kids up to speed to come in and be able to spell Shae (Mendoza), she got real tired there a little bit. We learned the heart of our team… Shae’s toughness, Lindsay (Byron) and Jenae (Rhoads) taking control. We are not bigger than anybody we play so we have to play a little better positioning.”

JDHS went 6-15 at the charity stripe, Ketchikan 7-15. Both teams are known for their deep shots but each hit just three from beyond the arch.

“Those are some tough losses,” assistant coach Nicole Fenumiai said. “Ketchikan is a great competitor, especially this year. I think we saw they are top two in the state. I think we can definitely play with them. I think those are attainable, winnable games for us and there are just some things we have to tweak in practice to make sure everybody has bought in 100 %.” 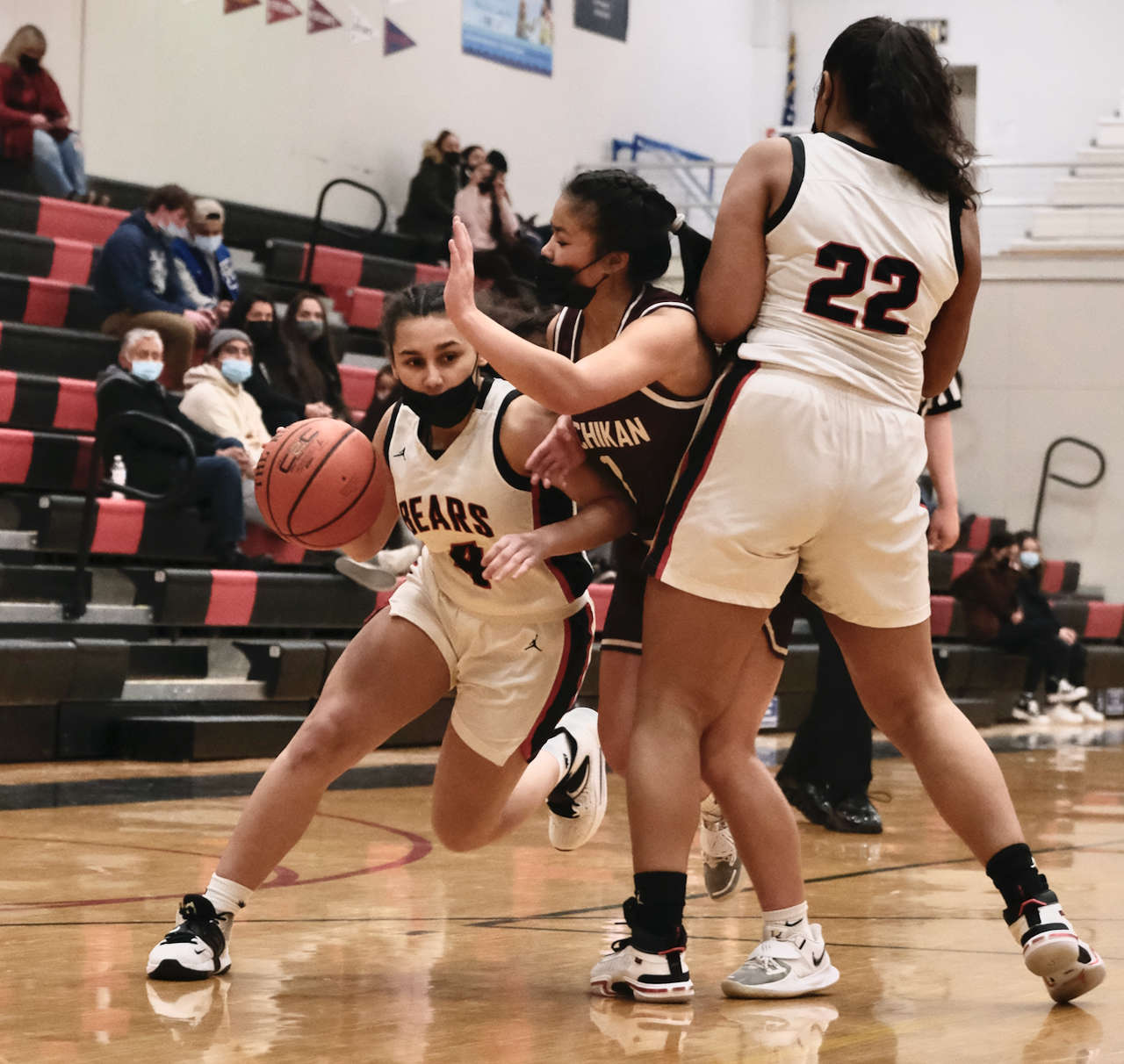