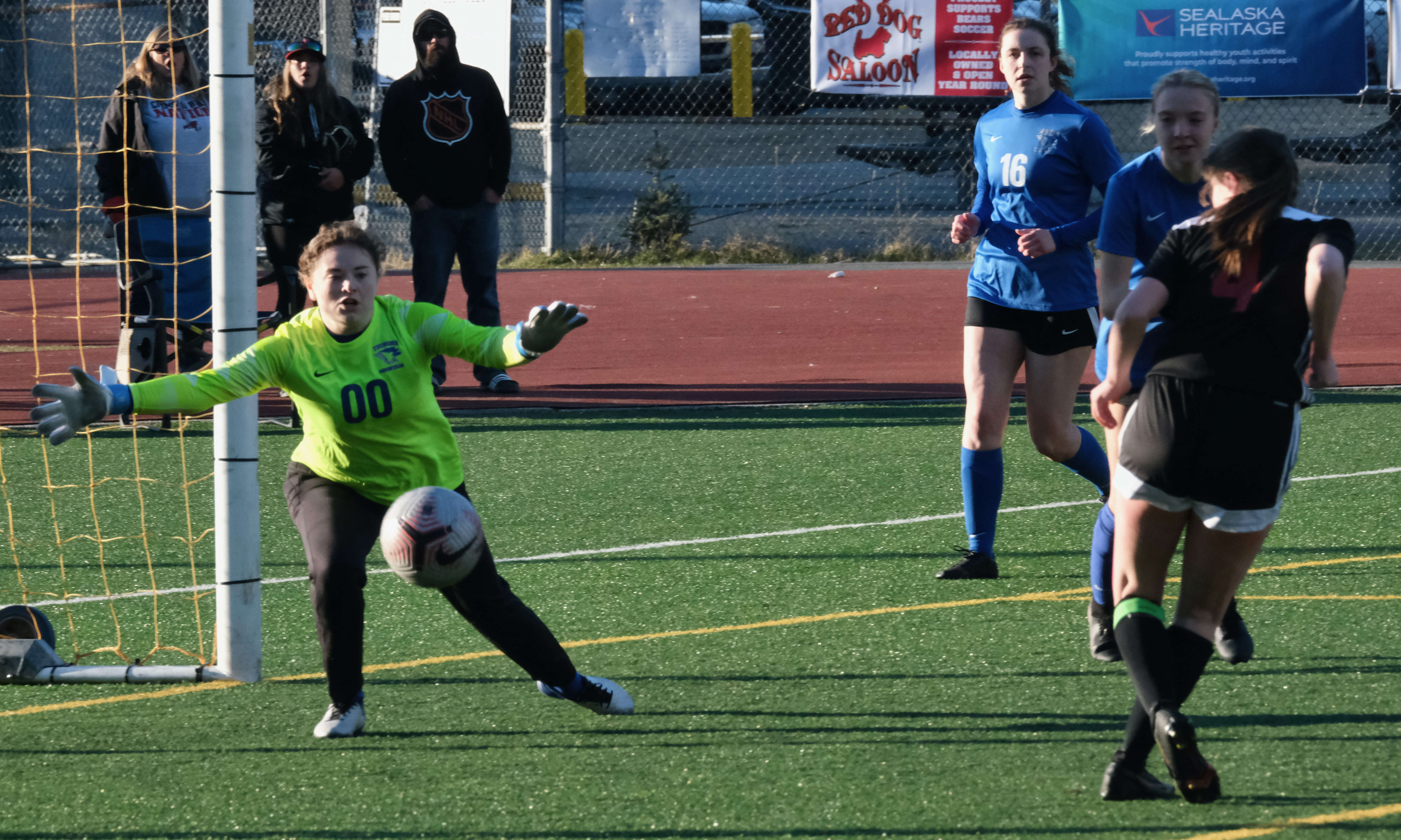 “When we play our rival here in town, you know, we have practiced together and play together pretty much the whole offseason all the time so the kids know each other,” JDHS coach Matt Dusenberry said of the derby matchup. “It always seems a little tighter because they know each other's tendencies. And they still want to try and prove that their team is better than the other, and we were able to be on the winning side this time… but we have three more matches, and just like last year they were close… I thought the energy of the kids came out, certainly creating chances, we had several corners and usually when you have lots of corners on the offensive side of things that usually means you are shooting on a regular basis…”

The first goal of the game came from an energy-induced run that resulted in a great deflection by TMHS sophomore keeper Kaidree Hartman on a shot by JDHS senior Kyla Bentz on a one-on-one situation.

JDHS won the corner and Crimson Bears senior Brooke Sanford put a corner kick in action around the top of the box and Bentz put it into the back of the net with 16 minutes remaining in the first half.

“I guess right place at the right time which feels pretty good being the first home game,” Bentz said. “It was nice to step out onto the field and play a team we have played throughout our lives. It feels good to grow up with other seniors and play that game. It was really fun. Scoring that goal was awesome because 99% in practice those don’t go in, so that 1% was there and that felt good. It was a really good cross in and it just got lucky…”

JDHS had put 12 shots towards the TM goal and two corner kicks before that first point was tallied. TM’s Hartman had two point blank saves up to that time and the Falcons back defenders kept most shots from distance.

JDHS kept most of the game possessions in the first half but TMHS senior Kiah Dihle put two runs together and classmate Jade Blackwell missed high on a chance that JDHS senior keeper Zuri DeJean had covered. DeJean earned her third shutout of the season.

In the second half, the Crimson Bears' Sanford played a ball down the line and Bentz picked it up and played it back against the grain to senior Ella Goldstein, who tapped it in with 27 minutes remaining in the game for a 2-0 advantage.

“I can barely remember it, the game was so crazy,” Goldstein said. “We just have been working so hard on our passing and our communication, our teamwork in just over three games. We’ve just gotten so much better as a team and I am just really proud to be on this team with these ladies… I have been working really hard with Blake (Plummer) on making runs and getting the through ball and we have been getting really good at that. So finally getting that and taking it in was just amazing…”

TMHS had strong marking from Dihle and classmates Abigail Booton and Naomi Olver,  juniors Kaelin Tibbles and Mackenzie Olver, and sophomore Adella Dihle, among others, but JDHS kept attacking pressure across the pitch.

“I think we played really good for six or seven minutes,” TMHS assistant coach Konrad Meister said. “They are just further ahead because we practiced for just two weeks now with the whole team… they are physically stronger, they were quicker and they played really well. I think they won very deservedly, congrats there. But I think we will get there… since this was our first game they have to see the difference between practice and the game. And you can see we have to get quicker in the transition moments… get more courages and accept the duels… a lot of times we were watching instead of acting and that is something they need to get the courage to get back into the game. For today our goalie did exceptionally well, but overall I think the team worked very hard and they played well…”

Crimson Bears freshman Natalie Travis scored with 18 minutes remaining to play as Goldstein passed the ball across the goal mouth to the other side and Travis tapped it in for a 3-0 advantage. Travis was also given the JDHS Hard Hat Award after the game.

“It was overwhelming,” Travis said. “It was really overwhelming… Ella touched the ball to me and I was so overwhelmed and just touched it in…”

Of the hard hat, Travis said, “I know I have to keep it safe and bring it to the next game. I am so excited.”

JDHS senior Blake Plummer killed the game off with four minutes left to play. Goldstein put a pass ahead to Plummer who arrived at the ball along with the TMHS keeper but Plummer won the touch for the score.

“I was looking for one for a while,” Plummer said. “I saw it and I was, like, I’m just going to run and hope it goes in and it did…”

Plummer said her mentality for the defending state champ Crimson Bears this season is “to act like we are not owed anything just because we won state. Everybody is going to be a hard team to play, especially TM… never underestimate who your are playing and don’t act like you are state champions until you get to the state championship.”

The TMHS Falcons girls and boys will host Homer on Friday on the TMHS pitch with the girls playing at 5:15 p.m. and the boys at 7 p.m.

On Saturday the JDHS girls play Homer at 11 a.m. on Adair Kennedy Field and the TMHS boys host Homer at 10:30 a.m. on the Falcons pitch.

The JDHS boys play at Ketchikan on Friday and Saturday. 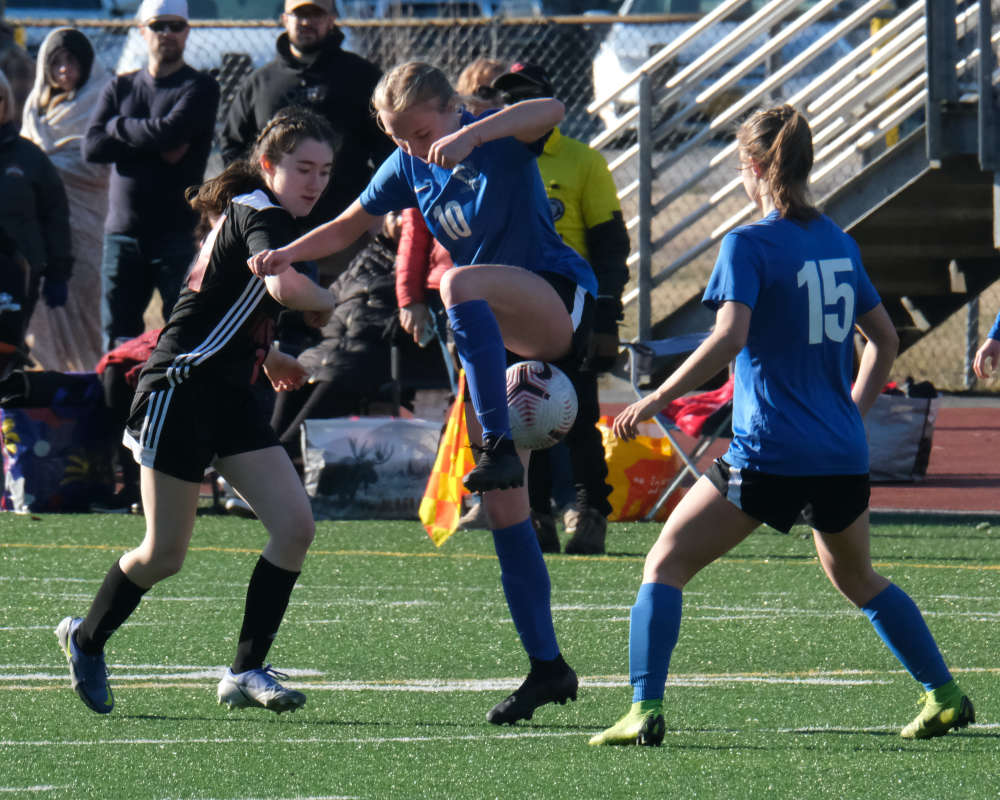