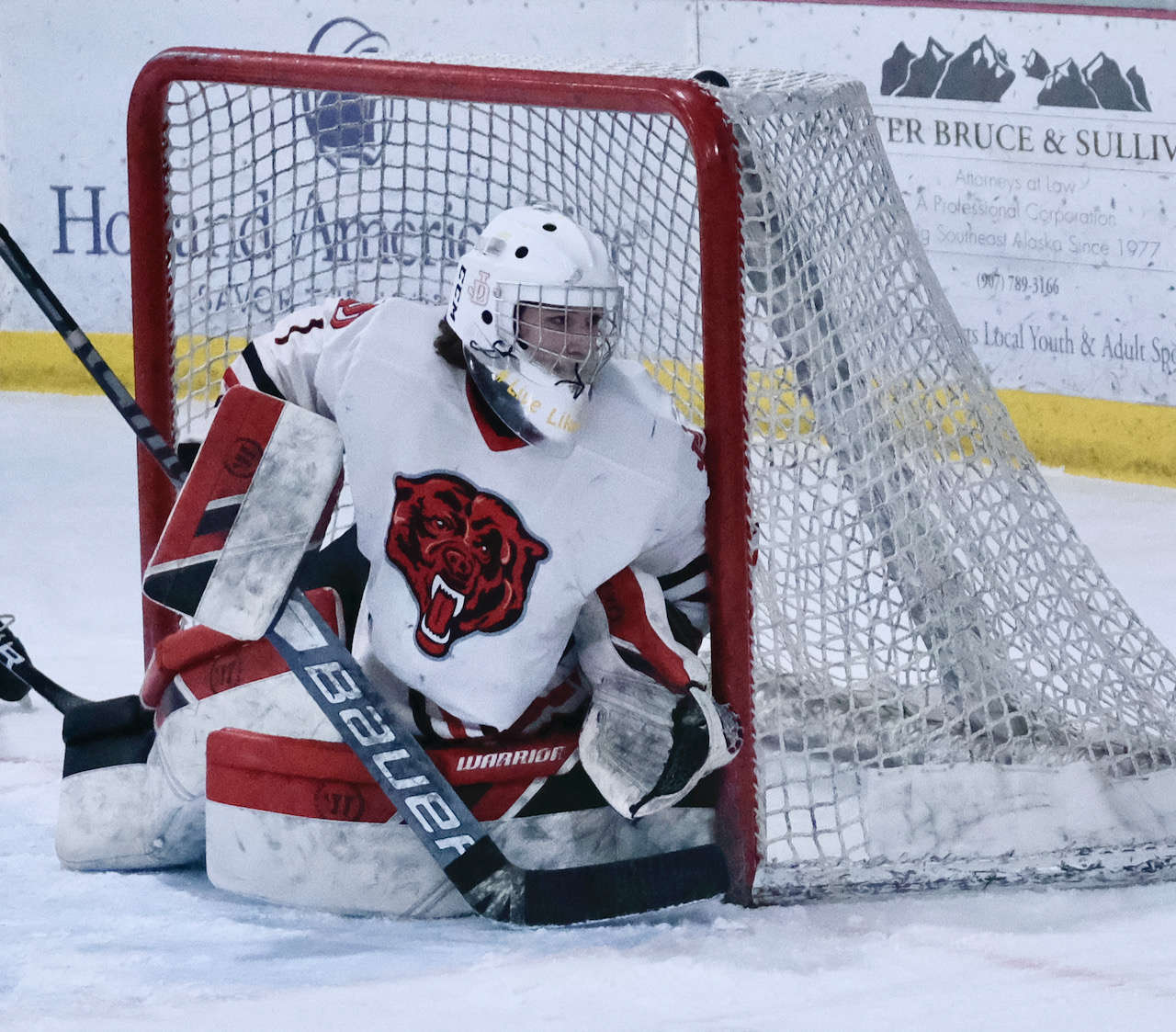 “I was just looking more for a challenge in my hockey career,” Baxter said. “I was wanting to get more exposure and more training…”

“The level of competition is really nerve-wracking but also really fun to play in,” he said. “There is definitely a lot of really good players down there…”

Baxter, at five-foot-10-inches tall and weighing 161-pounds, begins practice with the Blazers on Aug. 15 and games start in mid-September.

“The ages in the junior league are 16-21 so you can play until you are 21 years old,” Baxter said. “I just wanted to be in this league to get more exposure with college coaches and stuff and more training…”

Baxter will continue his education through home schooling and will stay with a host, or "billet," family.

Bellingham is one of five teams brought together by the USPHL for a new Northwest Division this season. Opponents in their division include the Rogue Valley Royals from Medford, Oregon; the Vernal Oilers from Vernal, Utah; the Rock Springs Prospectors from Rock Springs, Wyoming; and in-state power Seattle Totems. The USPHL also includes Premier divisions Florida, Great Lakes, Mid Atlantic, Midwest East, Midwest West Pacific, New England, Southeast and Mountain.

“It’s a nice place to be in,” Baxter said of Bellingham. “It’s beautiful and similar to Juneau…”

Baxter hopes to achieve success "by staying focused and progressing in my goals and progressing through the season with training and practices. I’ll even have my own goalie coach… I am definitely going to be nervous about having this experience but I’m excited to see what comes my way and I’m excited to be challenged with being on my own.”

Blazers head coach Mark MacDonald said, “Brayden stood out to us at our Main Camp not only because of his natural ability to stop the puck, but also because of how technically sound he is between the pipes. You can tell Brayden has spent the extra time at goalie camps and clinics and it shows in his performance. We have the luxury here in Bellingham of having two goalie coaches as well as a goalie consultant who currently is the emergency back up for the Seattle Kraken in the NHL and all three of them were extremely impressed with not just Brayden's performance, but also how coachable he is. Often times when players get to a certain age or level they start to think they have it all figured out and don't have anything left to learn, but this could not be further from the truth with Brayden. He was extremely receptive to all of our coaches feedback and would make changes to his game on the fly which is something any coach loves to see as it shows the player is willing to make changes to continue to grow in the game. Overall Brayden is an outstanding goalie with a great head on his shoulders who I could not be more excited to have the opportunity to coach."

The USPHL operates in 24 of the 50 states and with 600 teams is the nation's largest amateur ice hockey league. Junior hockey leagues are considered amateur and a step or two above high school play. Their main goal is to prepare and develop players for college hockey. Over 3,000 USPHL players competed in college last season and six former USPHL players were selected in this year's professional National Hockey League draft.

"As a member of the USPHL Premier, our teams main goal is to move as many players on to college as possible," coach MacDonald said. "Whether this is directly from our program or through a higher level of junior, we hope to see each individual improve to a point where at the end of the season they are ready to make the jump to a higher level of competition. Wins and losses are obviously important, but I believe the true judge of success at the junior hockey level comes from the individual achievements you make with each player throughout the season. My goal as a coach is to not only develop each players hockey skills, but also to engage them in our community, push them to be better people off the ice, and hopefully leave them with a stronger love and passion for the game then when they started."

Baxter started playing hockey at age six in the Juneau Capitals system and grew up playing with teammates into the JDHS Crimson Bears system.

“I am going to miss playing with them for sure,” Baxter said. “I will miss playing my senior year with them. I really hope the best for them this year…”

He said one of his best memories "is being state champs of our Juneau Capitals team in Tok. I was 16.”

Baxter, whose parents are Christa and Corey Baxter, said his interest in hockey began when his father took him to the rink at age six.

“I saw a practice and it looked like fun,” Baxter said.

That fun expanded into the extreme pleasure he finds in the net.

“Well, it’s really challenging and fast,” he said. “It’s fun having that relief of saving and blocking pucks and helping my teammates win the battle of every game.” 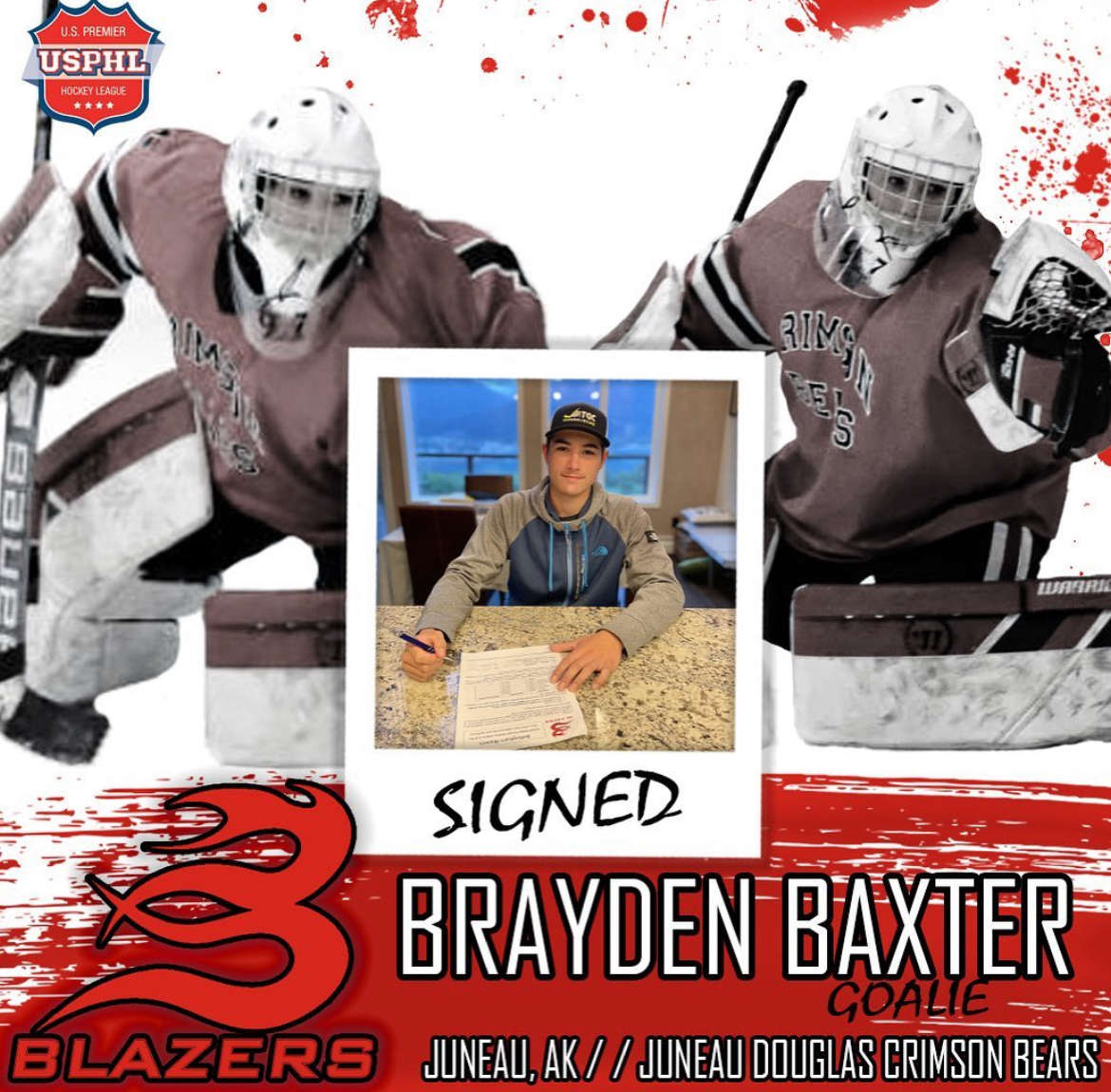 Above - The Bellingham Blazers posted the signing of Juneau's Brayden Baxter on their social media. Below is a slideshow of Baxter playing last season for the Juneau-Douglas High School: Yadaa.at Kalé Crimson Bears. He will forgo his senior high school season to play in the United States Premier Hockey League in the Northwest Division for the Bellingham Blazers.