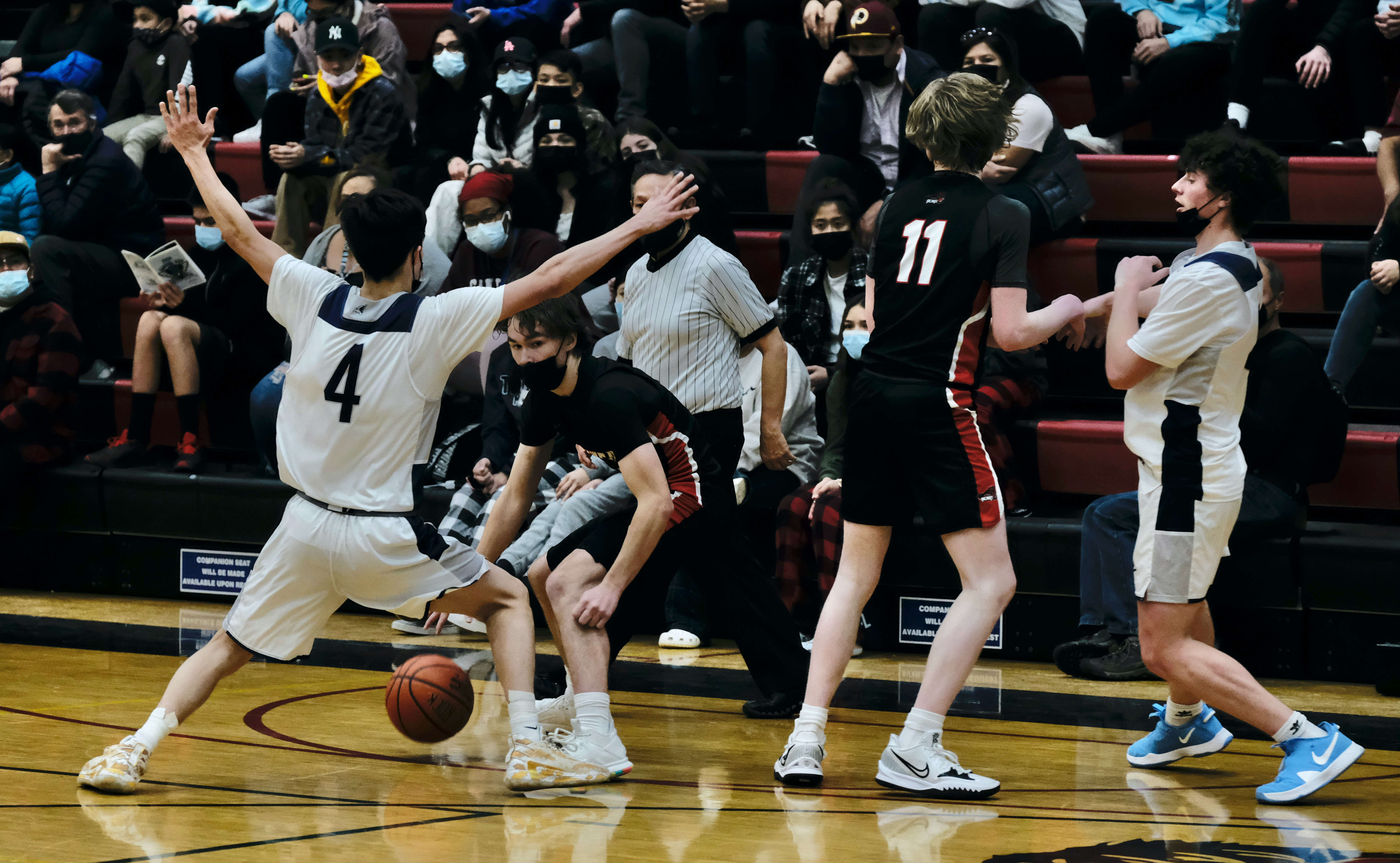 JDHS senior Porter Nelson dribbles over a screen by sophomore Sean Oliver against Eagle River in December. Nelson led the Crimson Bears in scoring against Monroe on Wednesday in Fairbanks. (Klas Stolpe)

Juneau, Alaska (KINY) - The Juneau-Douglas High School: Yadaa.at Kalé boys basketball team hit a cold streak in Fairbanks on Wednesday. Not the weather. Just an off shooting night in a 47-34 loss to the Monroe Catholic High School Rams.

“We’re working,” Juneau-Douglas coach Robert Casperson said. “I’m really proud of our effort. We’re working really hard defensively. There’s opportunities for us to score buckets, and we’re just not. If we are scoring in the 30’s that puts an immense amount of pressure on our defense to hold people in the 30’s then. And that is not easy to do. We have to find ways to get our shots to fall. And that’s just concentrating more. We are getting good looks, they are just not going in.”

In Monroe’s smaller gym with a decent size crowd the hoops atmosphere was high.

“It was loud,” Casperson said. “And they play really hard.”

The Crimson Bears played just as hard. Senior Porter Nelson hit a shot past the arch and classmate Jake Sleppy, junior Orion Dybdahl and sophomore Sean Oliver all found a bucket to stay within two points, 11-9 after the first quarter.

Both teams scored 10 points apiece in the second quarter. Sophomore Alwen Carillo and juniors Joseph Aline and Chris Harris all found the score book to keep the Crimson Bears within two points of the Rams, 21-19, at the half.

Monroe was also a very patient team and Casperson noted that a patient opponent takes away your own possessions for scoring opportunities.

“We tried some things to speed them up,” he said. “We trapped, went to a full-court trap later in the game. That gave us some opportunities for layups.”

In the third quarter the Crimson Bears managed just five points. One was a deep shot by Aline and another closer in for Oliver. The Rams would tally 16 points in the stanza from five players for a 37-24 advantage.

“And a lot of our shots at the rim were just bouncing around and rattling out,” Casperson said.

JDHS also got into early bonus rewards in the second half and were shooting free-throws in the fourth quarter.

“Maybe it was two minutes left in the third quarter,” Casperson said. “So we were playing 10 minutes of basketball with opportunities at the free-throw line and we didn’t convert very many of those either.”

Both teams would again score 10 points apiece in the final eight minutes of action.

Nelson scored the only field goals of the final period for the Crimson Bears. Five JDHS players would go to the charity stripe and shot 6-16 in that stanza.

“That puts a lot of pressure on our defense,” Casperson said. “And the guys are working their tails off on defense. We’re diving on the floor, rebounding… a lot of great things are happening.”

Casperson noted that the Crimson Bears have only scored in the low 30’s one other time this season, the first game of the year in Las Vegas where they fell 42-30 to Amplus in the Tarkanian Classic.

“That was different because in that game we just bombed three’s against a 2-3 zone and we never attacked the defense,” he said. “That game against Amplus we shot zero free-throws for the entire game. I’ve been coaching for 20 years and I don’t know if that’s ever happened before. And then at the Anchorage tournament we had a game were we shot just one free-throw.”

That game was a 58-53 loss to the Lathrop Malemutes in the Alaska Airlines Classic.

“We made it a focal point, in preparation for coming here, that we have got to get more aggressive,” Casperson said. “We have to attack the rim more. We did, and we missed. At that point when you get there you just have to focus and finish. If you get hit, you get hit. If you go to the free-throw line you have to make the free-throws. We did a lot of the things we talked about doing, we just didn’t produce the points. It was a battle though. A fun game.”

“We are an inexperienced group,” he said. “And so this is good for us. One of the things we talked about after the game is that we are adding parts and pieces along the way. We are more willing to take charges, we’ve done that a lot more. We’re way more willing to dive on the floor for a loose ball. We’re trying to rotate and anticipate in our traps. Those are all the things we have to do, so we are building our capacity for success. We’re just going to have to get things dialed in offensively as we continue to improve.”

Casperson said “High school sports is about growth and improvement… out of the whole state, 24 teams in 4A or something, there is one team that gets to be state champions but everybody can keep getting better.”