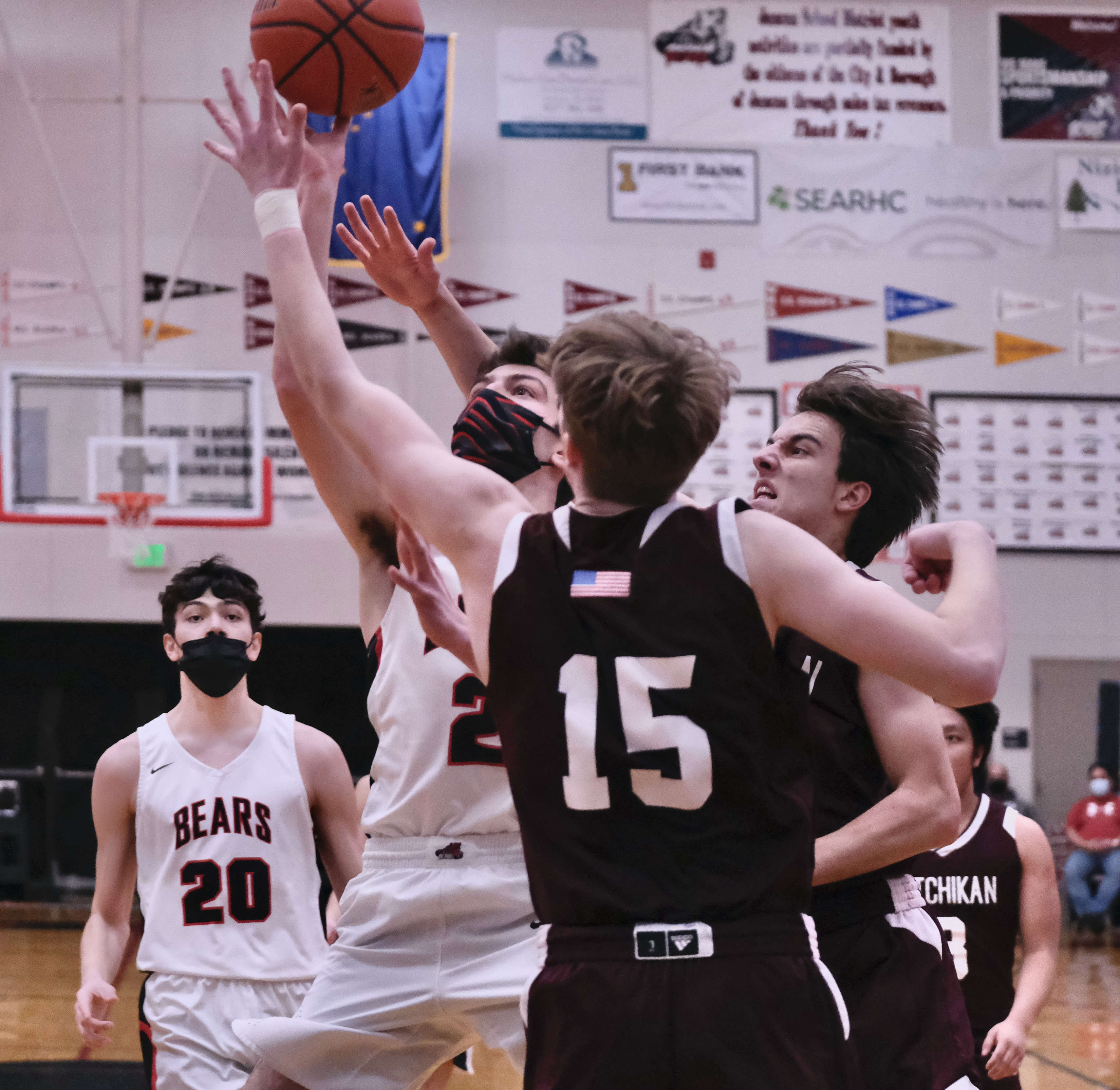 JDHS senior Tias Carney scores under pressure from Ketchikan seniors Josh Rhoads (15) and Zack Hanchey during the Crimson Bears 52-42 win over the Kings on Saturday in Juneau. (Klas Stolpe)

JDHS held a one-point lead, 31-30, heading into the fourth quarter and a steal by senior Tias Carney for a basket, followed by a deep three by sophomore Sean Oliver keyed a 12-2 Crimson Bears run and a 43-32 lead.

“It was a good battle tonight,” JDHS coach Robert Casperson said. “Being tied at half and a one point game going into the fourth created an exciting atmosphere. The crowd was great and really into it this weekend. Our student section brought a lot of energy from the opening tip to the final buzzer.”

Ketchikan sophomore Jared Rhoads scored to stop the run but JDHS’ Oliver hit from deep again and after Kings junior Clayton Olstad hit from the arc, Oliver was fouled and hit both for a 48-37 Crimson Bears lead.

Ketchikan junior Joeben Lorenzo hit from the arc to cut the lead to eight, 48-40, with 1:36 remaining to play, and Olstad made two free throws to narrow the lead to 48-42.

The Crimson Bears spread the court and forced the Kings to foul. Oliver and Carney made four straight free throws to ice the win.

“I’m really proud of the guys and the strides they made this weekend,” Casperson said. “I believe we’ve grown up a lot through the court of the season and our tough schedule is starting to pay dividends.”

Ketchikan was playing depleted on Saturday with junior guard Archie Dundas nursing an injury from the previous night. The Kings also faced a packed Juneau gym as news spread of the tight game played on Friday.

Ketchikan scores came from Lorenzo and Olstad, both playing with minor injuries from the night before, and senior Josh Rhoads.

JDHS’ Oliver and Carrillo matched scores with Ketchikan’s Jared Rhoads through the second quarter and the Crimson Bears led by 10 points, 21-11, with two minutes left in the stanza.

JDHS junior Orion Dybdahl put in a score for a 23-11 advantage but Ketchikan responded with a 12-0 run to close the second quarter behind two baskets by sophomore Andrew Kleinschmidt, one from freshman Marcus Stockhausen and two from Olstad to tie the score at 23-23 at the half.

Oliver opened the third quarter with a bucket for a 25-23 JDHS lead but Stockhausen tied the game and Jared Rhoads blocked a shot for possession. Olstad gave the Kings a 28-25 lead.

JDHS’ Dybdahl scored inside off a feed from Carrillo, then followed a shot for a score and Carrillo put in a basket for a 31-28 Crimson Bears lead with just seconds remaining in the third quarter.

Ketchikan’s Olstad scored at the buzzer to close to within one point, 31-30, with the final quarter awaiting.

“It was a great learning experience for our kids,” Ketchikan coach Eric Stockhausen said. “Juneau did a great job and deserved their success. I really like their kids. We had an opportunity to get some younger guys major varsity minutes due to injuries by key contributors. We competed and, as a coach, that is all you can ask for and I appreciate my players efforts.”

JDHS is 6-13 overall and 3-1 in the Southeast Conference.

The JDHS boys and girls will host the South Anchorage Wolverines on Friday and Saturday.

Ketchikan returns to Juneau to face the TMHS Falcons on Friday and Saturday. 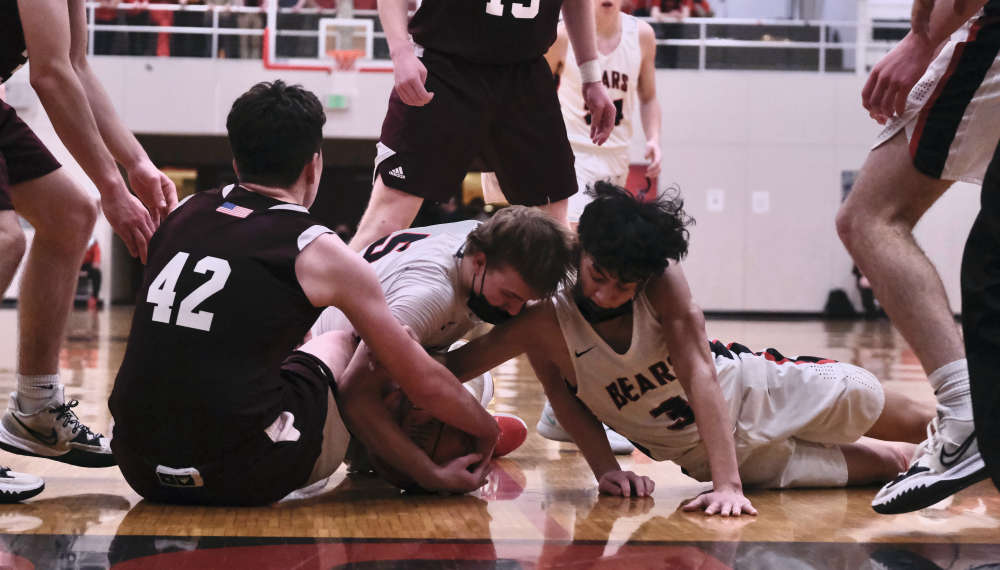