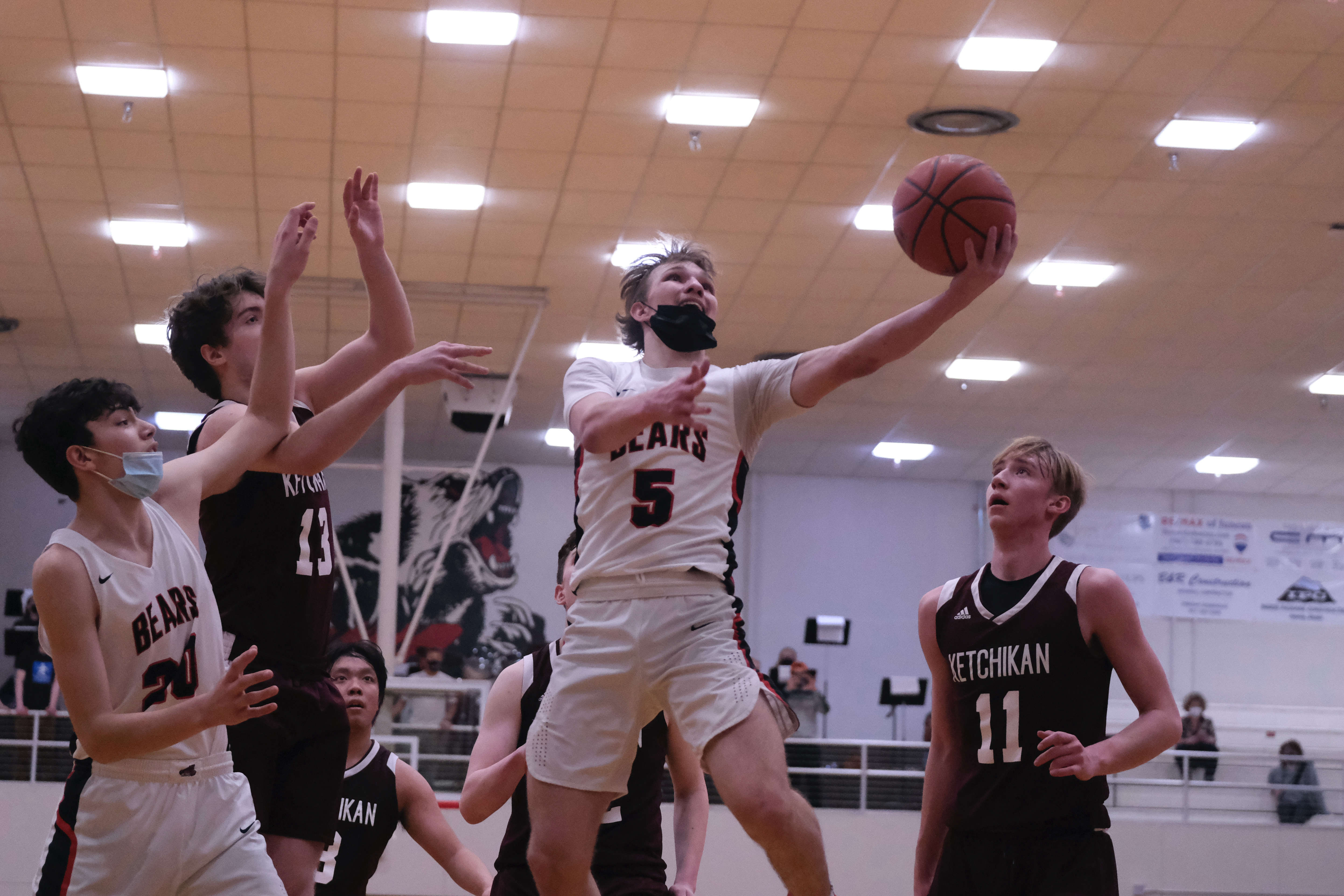 Juneau, Alaska (KINY) - Juneau-Douglas High School: Yadaa.at Kalé junior Chris Harris scored six points in the final minute to secure a 52-45 win over the visiting Ketchikan High School boys basketball team on Friday and the Crimson Bears netted a share of the 4A Southeast Conference lead with the Kings.

Ketchikan held a 36-34 lead starting the fourth quarter but JDHS junior Kai Hargrave hit a three for a 37-36 lead and junior Orion Dybdahl blocked a shot on one end and scored on the other for a 39-36 Crimson Bears advantage.

Ketchikan freshman Marcus Stockhausen hit from past the arc, drew a charge for possession and junior Clayton Olstad put the Kings up for their final lead at 41-39.

JDHS sophomore Alwen Carrillo had two assists among baskets by sophomore Sean Oliver, Dybdahl and Harris in a 9-2 run for a 48-43 Crimson Bears lead.

“It feels awesome,” Carrillo said. “It just feels great to finally get a win. Especially against Ketchikan, our conference rivals. It feels great.”

The win gives JDHS a 2-1 Southeast Conference record, even with Ketchikan. The Kings have swept Thunder Mountain and the Crimson Bears split with the Falcons who are 1-3 SEC.

“I’m sure the crowd loved it,” Juneau-Douglas coach Robert Casperson said. “It’s a great learning opportunity for us. We’re a young group, we’re explaining a lot of situations in-game.”

Casperson said he wanted the team to clear the free-throw lane when Harris was shooting with 10 seconds left to play to insure they would not foul but the team thought he wanted two new players to substitute in the lane.

It all worked out.

“So we’re just learning through these situations,” Casperson said. “It’s a trial by fire. We’ve been tested all year long and I think it has been beneficial. One thing that is a lot of fun with this group is the emotions are pretty genuine. They are genuinely excited to get a conference win at home, to get any win at this point, and that is fun to see. I’m sure as we get more of these it will be a little bit more routine for us. But I’m really happy for them and the excitement that they are feeling right now. It is definitely a rollercoaster with this group.”

The ride started from both teams from the opening tap on.

JDHS sophomore Alwen Carrillo had two steals, one for a basket, and junior Orion Dybdahl a blocked shot which led to a score by senior Tias Carney.

Ketchikan junior Joeben Lorenzo and Olstad hit past the arc for a 10-9 Kings advantage but Carrillo answered with a nice drive and a 11-10 lead after one quarter.

Carrillo, Dybdahl and Oliver put JDHS up 22-15 at the half.

Carrillo then drove the length of the court to open the second half, Dybdhal hit a free-throw, and Carrillo stole Ketchikan’s next possession and put JDHS up by 12 points 27-15 with five minutes left in the stanza.

Oliver would hit two free-throws and Harris netted an old fashioned three-point-play for a 34-33 JDHS lead.

Ketchikan junior Album Shut hit a deep shot at the buzzer for a 36-34 Kings lead with the fourth quarter remaining.

“We’ve had about three weeks of consistently good practice,” Ketchikan coach Eric Stockhausen said. “But, especially in the first half, I thought we hadn’t played in three weeks. What I enjoyed about our kids is, when it was getting frustrating and we were down 10, we found a way to come back, step up and do the things we had been doing consistently for three weeks.”

JDHS will host Ketchikan tonight at 7 p.m. in the Crimson Bears gym.

“Give credit to Juneau,” Ketchikan coach Eric Stockhausen said. “They did the things they needed to at the end to close out a game. We got some things to break down and learn from and try to find a way to do better. Our kids know this, I’ve been here 14 years and I think for the 20 some years before it there’s only been two occasions where we’ve come up here and been able to get two in this gym. It’s a tough place to play. The great thing is if you fall down Friday night you don’t have to wait long to get another chance. I would rather fall down on Friday then Saturday. It’s true in every sport, it’s hard to play on the road. I told them, ‘do you think the Bengals and the Rams are going to show up where the Super Bowl is tomorrow or do you think they have been there for awhile?’  You get your body ready and sitting on a plane from eight o’clock isn’t the best way to get your body and mind ready to play a game… There are some challenges in Southeast. Every team has to do it. Routines are different. The challenge is to adjust. This is a good experience for us. We’re still fairly young. Everything is a learning experience but, again, give credit to Juneau-Douglas, they did a good job. We’ll see if we can do better tomorrow.” 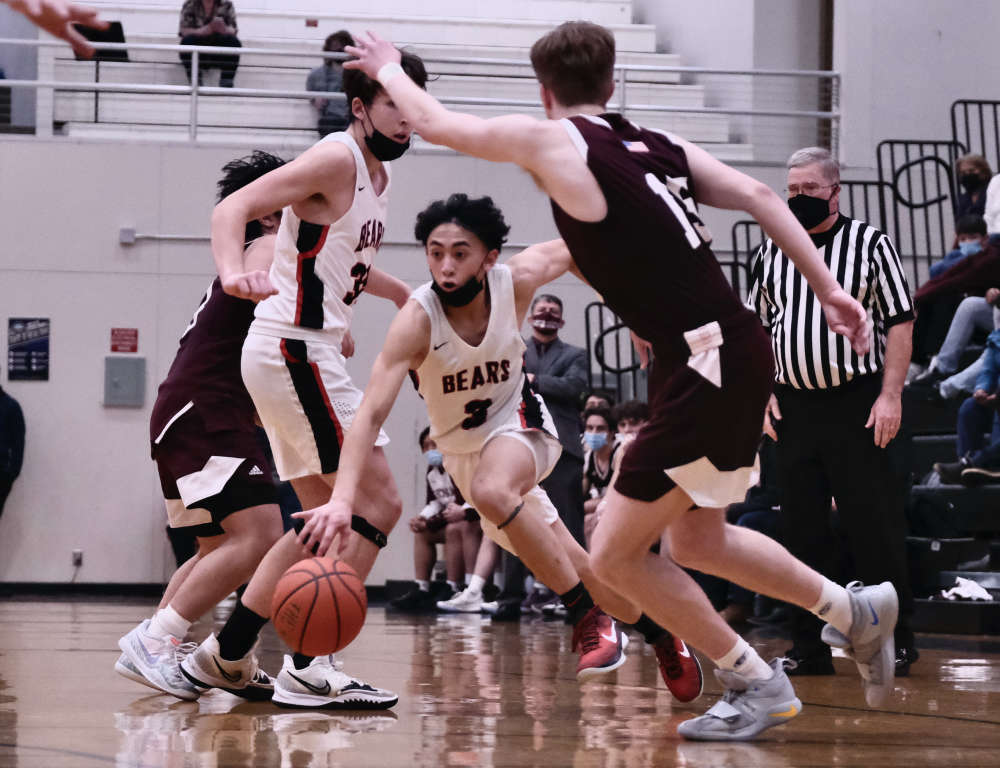