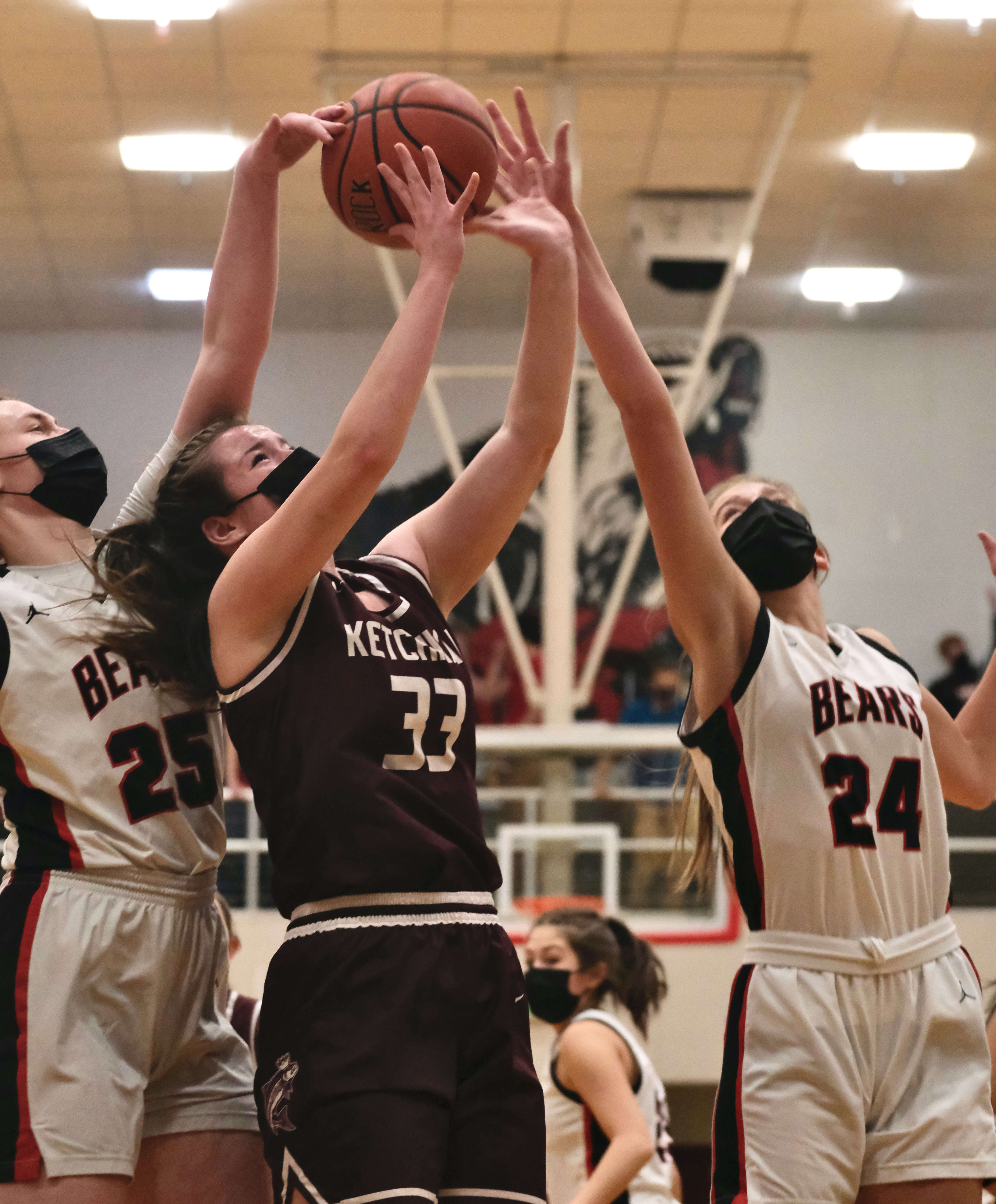 Juneau, Alaska (KINY) - The Juneau-Douglas High School: Yadaa.at Kalé girls basketball team put a scare into the visiting Ketchikan Lady Kings on Friday night at the Crimson Bears den, taking the preseason favorite down to the wire before succumbing 41-32 in the first southeast conference game of the season for both teams.

“Definitely some hesitancy on offense,” Assistant coach Nicole Fenumiai said. “I think we gave up a lot of shot opportunities. We played very timid I think in the beginning.”

The Crimson Bears scored the first two baskets of the game as junior Ashley Laudert hit inside and classmate Skylar Tuckwood stole a pass and put a layup in.

Then Ketchikan went on a 14-0 run behind deep shots from junior Lindsay Byron and sophomore Bree Johnson and baskets by seniors Shaelynn Mendoza, Paige Boehlert and Jenae Rhoads to lead by 10 points with under three minutes remaining in the first quarter.

Laudert picked off two passes inside and senior Trinity Jackson and junior Kiyara Miller closed the gap to 16-9 after one quarter.

Laudert had two blocked shots to start the second quarter and senior Mackenzie Nichols stole the ball for a layup and senior Rebekah Grube did the same to close the gap to 16-13.

JDHS’ Laudert and senior Gabbi George-Frank kept the Lady Kings off the glass and Jackson kept Ketchikan’s Johnson away from the ball.

Ketchikan hit their first two baskets of the stanza with just over a minute left as Rhoads and Mendoza found the basket.

Laudert blocked her fourth shot of the first half with 15 seconds left and Jackson buried a shot from past the arch to close within three, 16-13 at the half.

“As our defensive intensity picked up our offense started to come to us,” Fenumiai, filling in for head coach Steve Potter, said.  “I think they did a good job of locking down one of their big shooters, Bree Johnson, I think that is a testament to these girls’ defense and their work ethic in practice. Trinity (Jackson) did fabulous guarding her, it was very impressive to watch.”

Ketchikan did their own defensive shutdown on shooters, forcing Tuckwood away from her outside game in the first half. Tuckwood responded with hard defense, good ball movement and aggressive dribbling.

“I still think she was attacking the basket fairly well,” Fenumiai said. “It was great to see she was being aggressive because sometimes she holds back and it was nice to see her unleash like that.”

JDHS opened the second half with a full court press and any Kayhi player that got past the pressure was met at the hoop by Laudert, who picked up three rebounds and two more blocked shots in the first three minutes of action.

“She has been great,” Fenumiai said. “She is a big part of our defense especially because she is that low person, or big, and so she sees everything. When she is moving and in the position she needs to be able to recognize that, and when our communication pairs up with that, it really intensifies everything on the defensive end.”

Laudert scored inside and Jackson hit from deep for a 21-20 Crimson Bears lead with 3:57 left in the third quarter.

Tuckwood picked up her fifth steal and scored for a 23-20 advantage.

Ketchikan’s Byron answered from deep in the corner to tie the score at 23-23 but Laudert scored inside and was fouled. She missed the free-throw but JDHS led 25-23 with a minute left in the stanza.

Ketchikan’s Mendoza hit two free throws to tie the score again at 25-25 but Tuckwood put a nice shot off the glass for a 27-25 lead at the end of three quarters.

Ketchikan made up for their third-quarter scoring drought in the final stanza, tying the score with 7:25 remaining on a Byron jumper and slowly working to a 31-27 advantage on free throws by Mendoza.

Mendoza answered by dribbling the length of the court to give Kayhi a 36-31 lead.

JDHS sophomore Mila Hargrave put the final point on the board for the Crimson Bears, making one of two free-throws.

Ketchikan’s Byron and Rhoads scored inside and then the Lady Kings pulled the ball out and worked the perimeter with just over a minute remaining. JDHS struggled to foul the Lady Kings until 13 seconds remained and Mendoza sealed the win, making a final free-throw.

“First of all Juneau played really hard,” Ketchikan coach Kelly Smith said. “They’re longer, I bet they had 10 blocked shots tonight. We kept trying to throw over the top of them. We are not going to make any excuses that we were tired. This is our first game in masks, that was a tough one. I thought at the end we gained a little bit of composure but we turned the ball over too much. When we got on a run I think there were some glimpses of how good we can be. I think our kids battled through a lot of adversity but it is always good to get a win in conference. It is not always going to be pretty. If you can not have your best day and still find a way to be successful, that’s a good skill in life. There are a lot of days you just have to grind and if you can still be successful at the end of the day, hey, that’s a good day.”

The two teams play again on Saturday at 7 p.m.

“We have to continue the defensive intensity,” Fenumiai said. “And offensively everybody just has to be ready to play and contribute and work on those things we talk about. They are coming underneath the screens and their shooters are looking for their shot opportunities. Our bigs, we need to have a big game from them too, they can’t be afraid to attack the basket and that’s what they are great at. First conference game and Ketchikan is a standout team. I didn’t think it was a terrible game for us.” 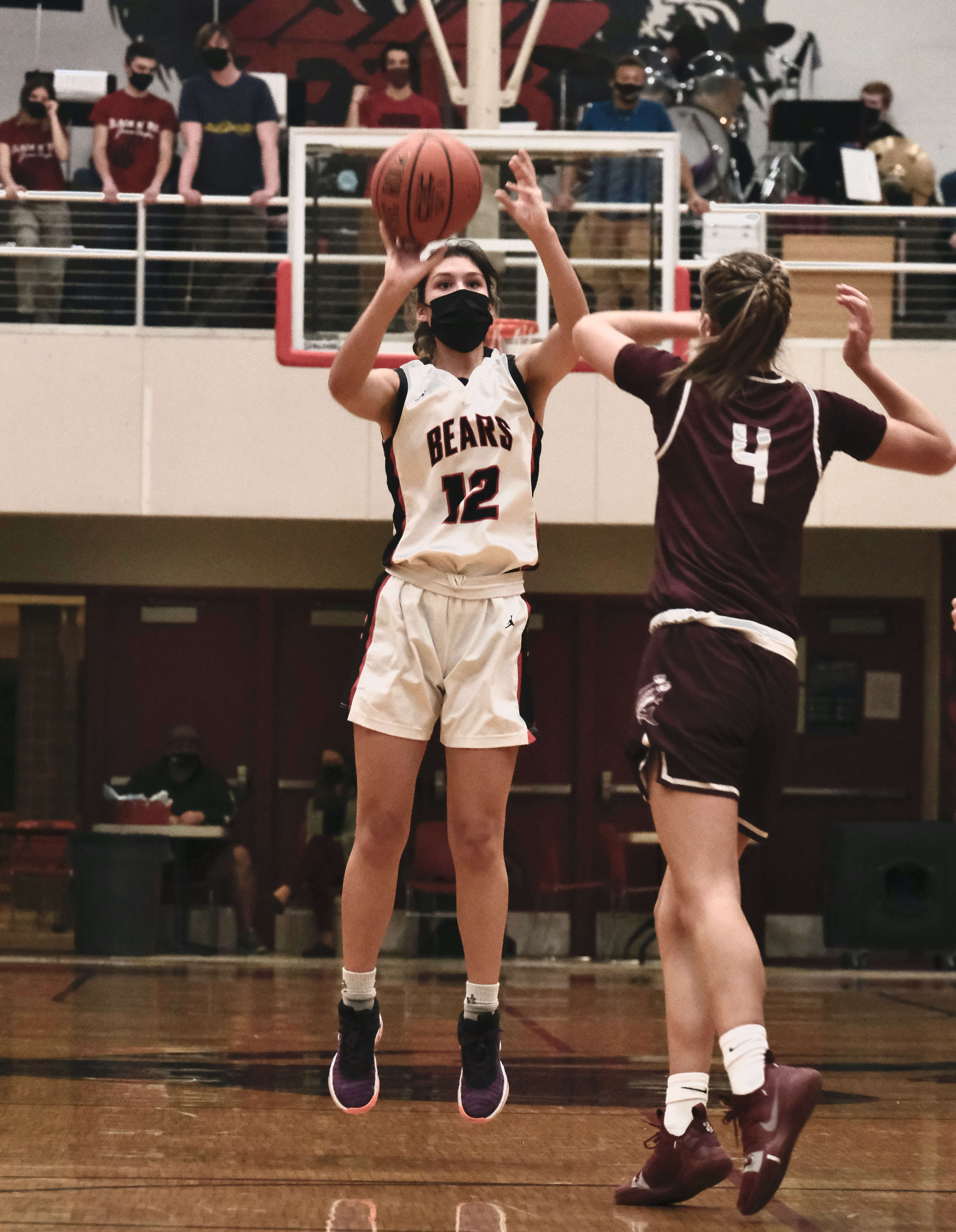