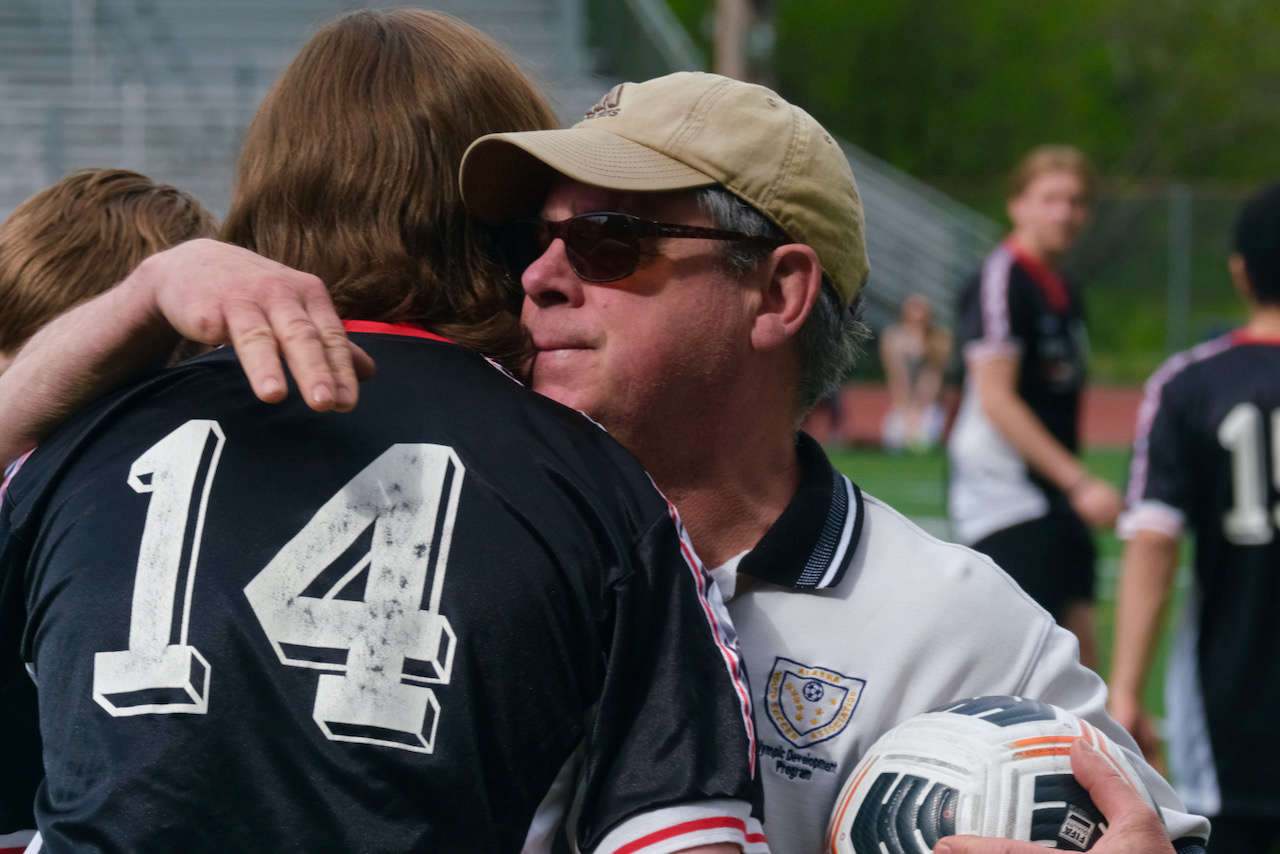 Juneau, Alaska (KINY) - Having already clinched the Southeast Conference title and first bid to state, the Juneau-Douglas High School: Yadaa.at Kalé boys soccer team senior night friendly on Sunday against visiting Ketchikan at Adair Kennedy Field was just that… a “friendly.” They shared the field and had a great time.

“That pretty much nails it,” JDHS coach Gary Lehnhart said. “We had clinched the conference so I talked to Ketchikan coaches ahead of time and said, ‘There is no disrespect here but I really don’t want to play my starters and the guys that are going to be playing at state because I just can’t risk injury at this point.’ I wanted my seniors to play together for a few minutes… and Ketchikan got the spirit of it and they played it that way… we canceled the JV game because both teams were tired and thin and I think we gave everybody a good time.”

The Crimson Bears seniors were honored before the game and after spending roughly 10 minutes on the pitch together, they subbed out and cheered on their underclassmen.

The game’s only goal came with most of the old guard on the pitch and senior Tias Carney put a through ball on to junior Gabe Cheng with just six minutes elapsed in the game. Cheng was playing an honorary role, along with sophomore goalie Alex Mallott and exchange senior Ahmed Mezel, for injured seniors Callan Smith, Ben Goldstein and Solomon Alper. That score would stand the entire match.

A long soccer season can be even longer if a player that is expected to aid in chasing a state championship does not get that opportunity on the pitch.

Smith, who was injured early in the year, was on the pitch to take part in the opening ceremonial kick, along with Goldstein, and then the ball was played out and both were subbed out.

“It was nice to just kind of be on the field one more time with the boys,” Smith said. “Not the season I was kind of hoping for but it is what it is, and just being able to be out there one more time is a blessing for sure. It was fun.”

Smith has taken a role as coach and mentor to the younger players.

“I have been trying to impart a little bit of wisdom to some of the younger players,” Smith said. “When I see something, I kind of let them know what they could have done differently…”

Smith spoke about some of his senior classmates.

“Tias (Carney) is probably one of our strongest players,” he said. “He really locks it down in the middle. He’s scoring some good goals this year. He is definitely a good leader.”

“Andre (Peirovi), another good leader. Really just locks down the attacking side. He’s been a really good asset on the wing this year. Always positive, which is super nice.”

“Cody (Kesselring) started playing last year. He is just a super awesome presence to have on the team. Always positive, always laughing.”

“Owen (Costello) is just another really good presence. He has been playing all four years. He is super quick. He locks them down and gets some good passes, stops some good runs.”

“Zayden (Schjivens) is probably the nicest person on our team. He is super fun to be around. He keeps everyone light. A really good defender, he just completely locked it down this year. He has improved so much. He has done phenomenal this year.”

“Ahmed (Mezel) is an exchange student from Bahrain. He’s a super cool person. Awesome asset to the team. Fun player to have on the team.”

“Sam (Marnon) has played all four years. Great defender. Really locks down. He has improved a lot for sure. Another super funny guy.”

“Will (Rehfeldt) has played all four years. He has improved quite a bit, really awesome to see. He has taken kind of a mentorship role, which is good to see.”

“Sam (Holst) is probably the absolute rock of our defense. He is such a great player, such a great person. He has been playing all four years. I liked playing with him on JV as freshmen. It was a blast because he is an absolute rock. He doesn’t let anything past him. Great presence. He is one of our captains this year. Lock-down defense, great communication. Super fun guy to be around. He livens up everything. Great person, great player, he will be missed for sure.”

“Ben (Goldstein), our stats guy. He is great. Actually a year younger but he skipped a grade, so he is a senior, which is super cool. Super smart. Really good goalie. Unfortunately he did break his ankle so he missed out on the season. Missed out on playing this year just like me, which is a bummer. But he has taken a good role. He has taken a mentorship role with our goalies, kind of training them up in his absence.”

Like most of his classmates, Smith has played from a young age. Born in Juneau, his family moved to England at age nine and he played club soccer until moving back to Alaska in eighth grade.

“It has been tough not being able to play,” Smith said. “But it is nice to have such a great group of boys to be able to still spend pretty much every day with. They are positive, we stay positive, we are learning together. And they make it super easy to talk to them and teach them a little bit…it is a great team to be around…” 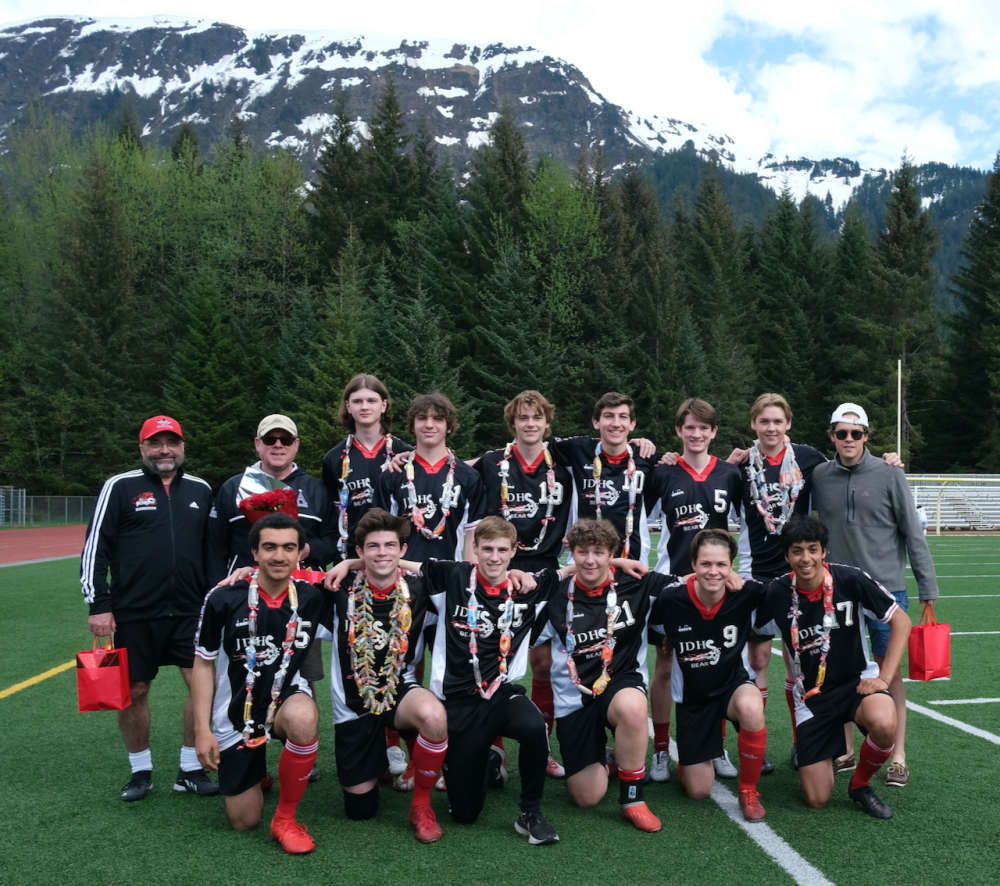