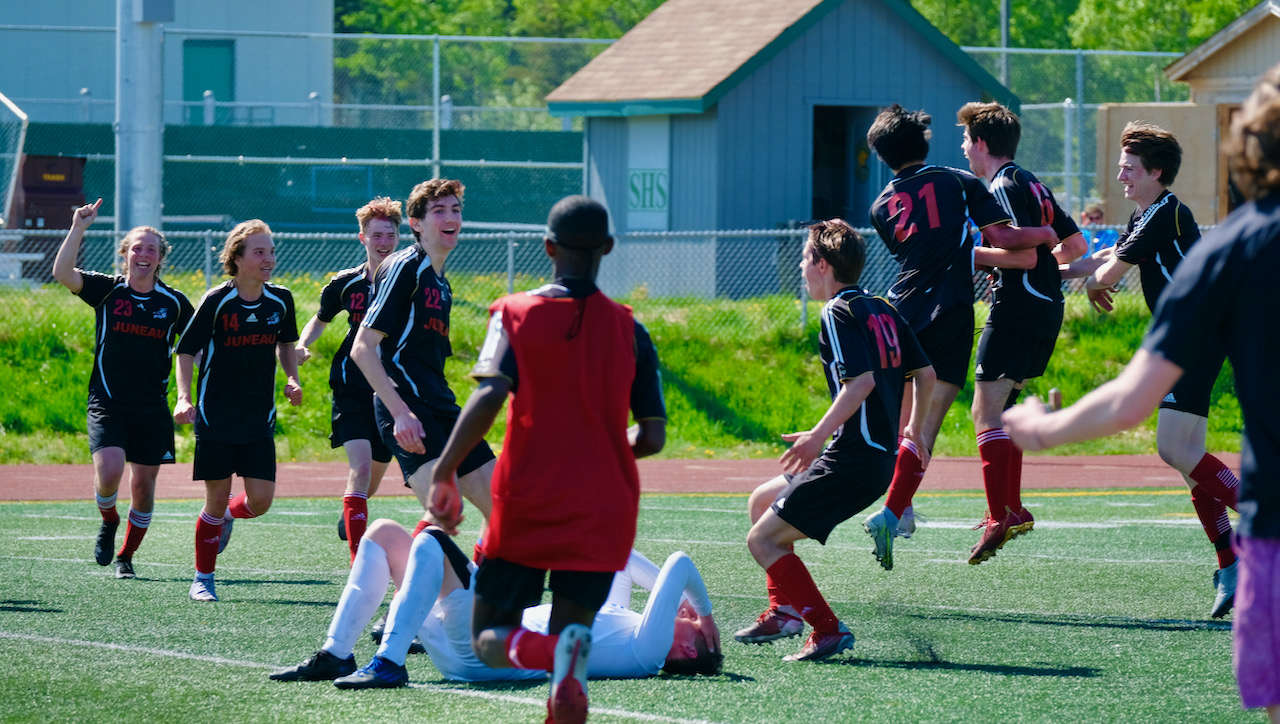 Anchorage, Alaska (KINY) - The top two soccer teams in the state took their derby to the premier stage on Saturday in the Alaska School Activities Association Soccer State Championships at Anchorage’s Service High School and while both were worthy of wearing the crown, the Juneau-Douglas High School: Yadaa.at Kalé Crimson Bears will sit on the throne this season in a 4-2 win over the defending champion Thunder Mountain Falcons.

“Fun, they are always fun,” JDHS coach Gary Lehnhart said. “This one was a lot of fun especially since we fell down 2-0 and we lost one of our best players… we were reeling. And then Tias (Carney picked us up, just a great individual effort…”

Thunder Mountain had scored the first two goals of the match, both by senior Wallace Adams.

“It was a really tough, hard fought match," Adams said. "It was a tough one to go out on in reality. I think we got a little too comfortable… something that my coach John Newell, he coached me all through middle school, he told me the worst score to be up by is 2-0. Because you are one goal away from making it a game again…”

Adams scored in the first 10 minutes of play on an unassisted long run.

The Falcons would strike the Crimson Bears cross bar three more times before the half expired, while the Crimson Bears would lose junior center-back Tayten Bennetsen. JDHS combated the tough physical play from Thunder Mountain with a stronger presence from their center and midbacks including senior Zayden Schijvens and  junior Will Robinson who were both praised by Lehnhart.

“It’s the same as it was the whole year” Schijvens said. “At the beginning of the year I didn’t play much again them… but the more I played the more he (coach Lehnhart) believed in me…”

Just two minutes into the second half Falcons junior Preston Lam put a corner kick into the Crimson Bears box that senior Talon Briggs headed and Adams headed the next touch in for a 2-0 advantage.

TMHS seemed to hold a physical presence over JDHS until Crimson Bears senior Tias Carney took it upon himself to rally his side.

With 30 minutes left to play Carney had a run down the side and dribbled into and through Falcons defenders to put a kick in, cutting the deficit in half and giving a shift in momentum to JDHS. The goal was Carney’s 20th of the season.

“It means a lot,” Carney said of the championship. “Just battling back from two years lost to injury and just working hard with my physical therapy and all my training every day to end this way my senior year. It means everything to me… at the start of the game we came out pretty flat. I know I didn’t do a great enough job demanding intensity. But as soon as the second half when I got that goal it really picked it up and I demanded the same for everybody and everybody produced what they needed to do…”

“This is crazy,” Ciambor said after the match. “I’m good friends with all the seniors and I knew I wanted to win it his year for them… this just feels amazing…”

The first was a free kick. Carney was fouled but Ciambor took the kick and bent it around the TMHS wall to tie the score.

Carney was fouled with 26 minutes remaining and Ciambor took the free kick, bending it around the TMHS wall to tie the score at 2-2.

Ciambor would run to a Carney through ball and give the Crimson Bears a 3-2 lead with 23 minutes left.

With 10 minutes remaining the duo repeated that scenario and Ciambor hit his third goal of the match for a 4-2 lead.

That would be the final as Crimson Bears sophomore keeper Alex Mallot controlled the box.

“I just really wanting to get us back into it,” Mallot said. “I was just really hoping and Kai did it… I was really trying to get on my toes and be ready because they can shoot for a mile from long distance and they have a powerful shot…”

After the match JDHS coach Lehnhart noted injured senior Callan Smith for his dedication to the program.

“It just feels amazing to have such a group of guys to carry us to the chip,” Smith said. “But for them to come this far and to play so well it just really puts a smile on my face…”

Carney and Robinson earned all state tournament selections for JDHS.

TMHS coach Tim Lewis said it was good to play teams at state the Falcons hadn’t seen in a few years.

“We did well against those teams,” Lewis said. “I thought we ended the season with some of the best soccer we’ve played so far. Our first half against JD was, in my opinion, one of our best halves of the year and unfortunately the second half didn’t go our way…” 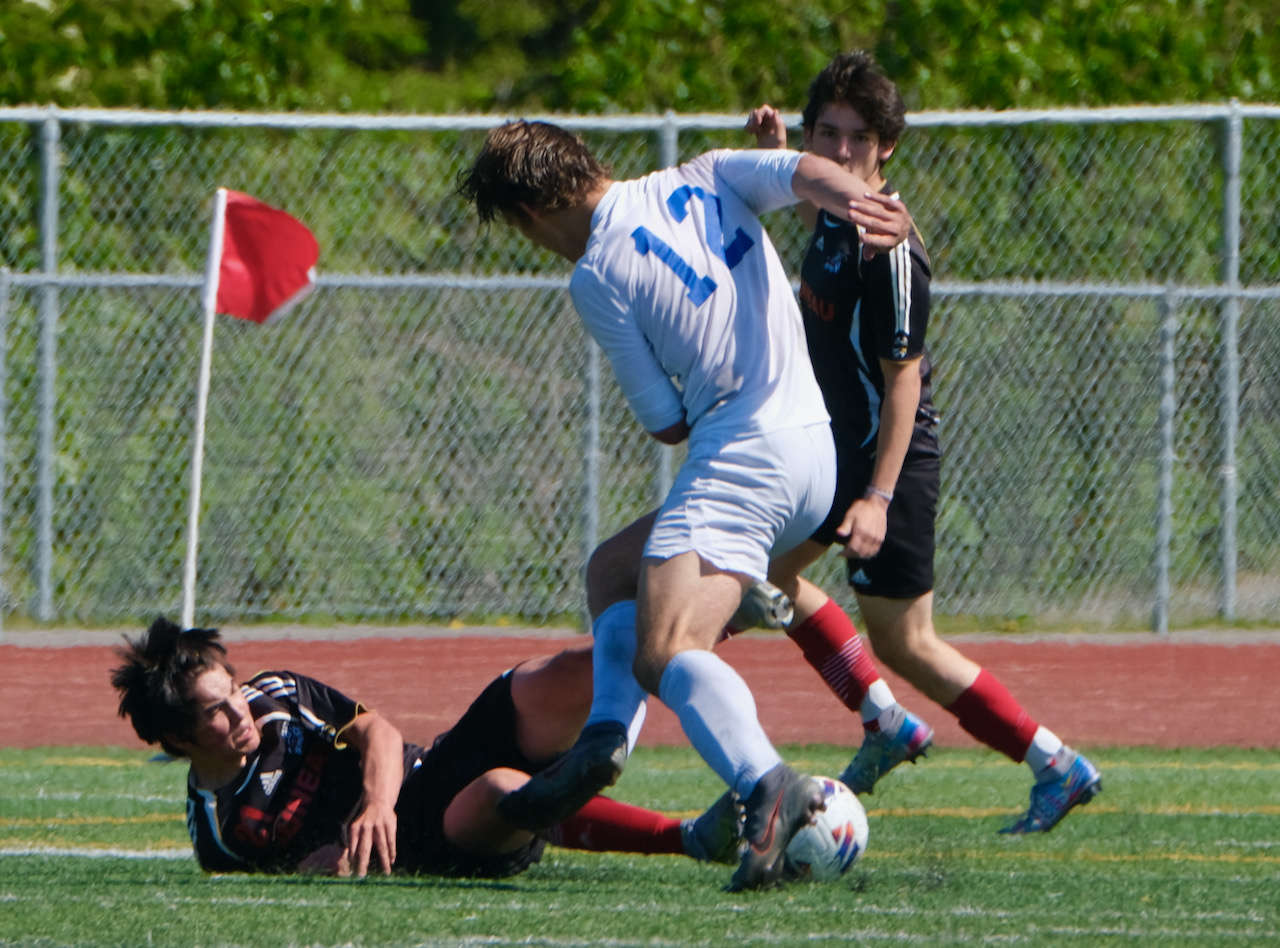 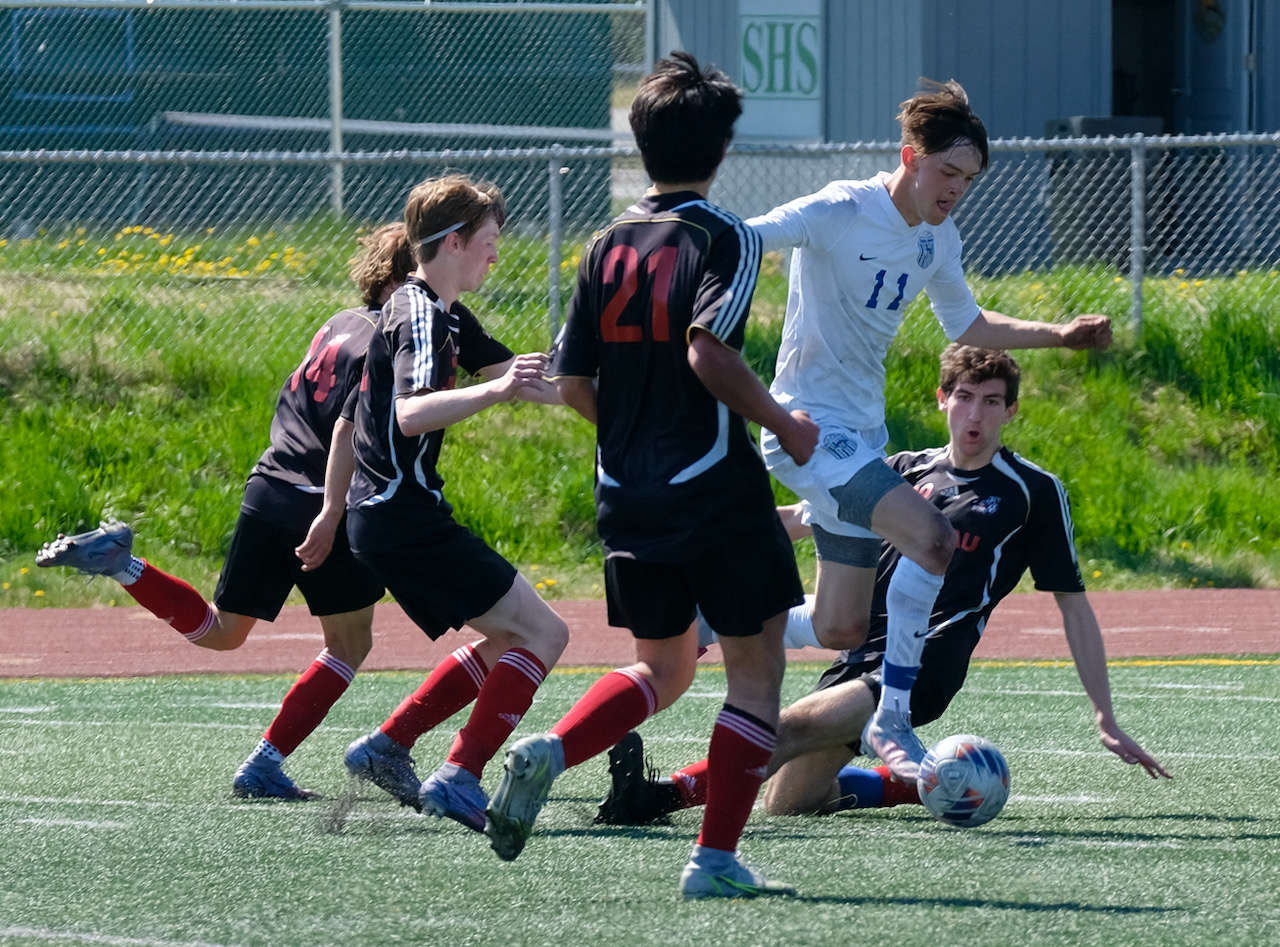