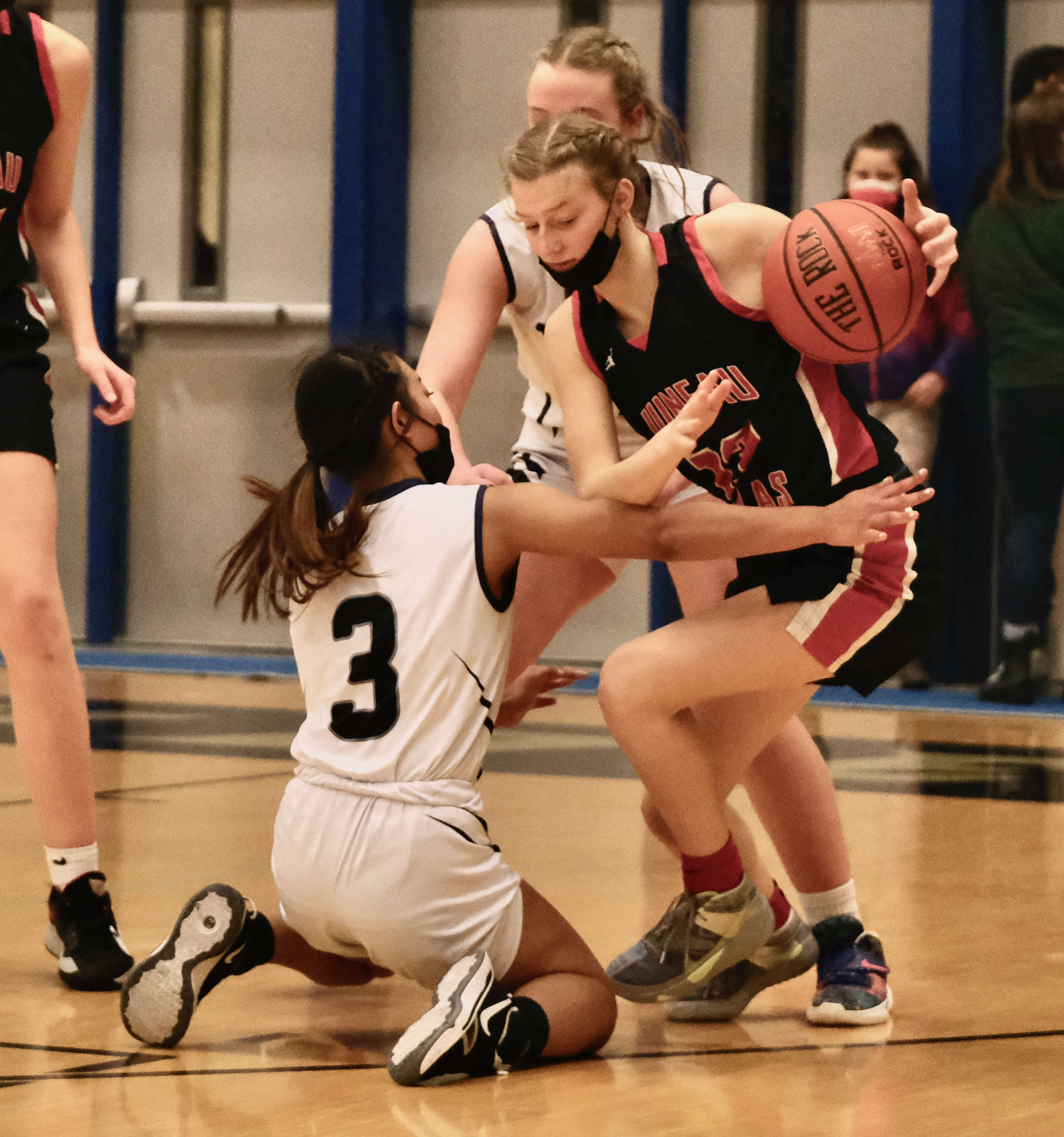 Juneau, Alaska (KINY) - Call her what you want - pick-pocket, thief, master of defensive deception, but junior guard Skylar Tuckwood has become adept at obtaining for her team what belongs to the opposition. The Crimson Bears junior guard had eight steals in Saturday’s 42-33 road win over cross-town rival Thunder Mountain in the Thunderdome.

“When our team plays good defense, good things like eight steals happen,” Tuckwood said. “We just really picked it up in the second half.”

The first in the quarter came as the clock started and led to a game-tying basket by senior Rebekah Grube. It also cascaded into a 14-2 JDHS run that featured a deep shot past the arc by Tuckwood along with three steals, an old fashioned three-point play by junior Kiyara Miller, a powerful rebound basket for sophomore Mila Hargrave, and Grube hitting again for a 36-26 lead.

TMHS senior Sydney Strong and junior Kiara Kookesh brought the Falcons back to within six at 36-30 but the momentum was taken again by Tuckwood as she scored on a layup then sniped her eighth steal, which led to two free throws by senior Trinity Jackson, pushing the lead to 40-30 with under a minute to play.

Kookesh hit two free throws for TMHS but Tuckwood answered for JDHS with two of her own for a 42-32 advantage. Freshman Cailynn Baxter put a final point on the board for the Falcons.

“It was a close game and we were in foul trouble,” Tuckwood said. “I knew that we had to step it up a little. I think we all, as a team, just played more aggressively and picked it up.”

Saturday’s game started with a fired-up Falcons team blanking the visiting Crimson Bears 9-0 in the first quarter behind an opening deep shot by sophomore Mikah Carandang, senior captain Strong banging inside for a score, and free throws by freshman Kerra Baxter and Kookesh.

“We don’t have a true point guard,” TMHS coach Andy Lee said. “That is part and parcel with our lack of developmental programs in Juneau. That said, our game plan was to pass it up and bring it up more methodically. We were more methodical in what we did and had better spacing. And we put in a defensive game plan that went 10 players deep. When you’re playing 10 players, it raises the morale of the team.”

JDHS struggled to hit from outside in the quarter.

“Well, like I always say, we want people to feel like they are doing well,” JDHS coach Steve Potter said. “We obviously shot too many threes to start the game but it didn’t feel like most of our shots were bad shots. They were a lower percentage and the way percentages work out, you are bound to have stretches like that. I told the girls between quarters that they had given themselves a challenge. I guess we don’t ever choose to do things the easy way. Thunder Mountain was on their heels yesterday (Friday) and we turned them over 10 times to start that game yesterday and today we turned them over twice. We were a step slow and our rotations weren’t as crisp. As the game went on we chipped away at the lead.”

The Falcons also drew two falls apiece on the Crimson Bears dominant junior center Ashley Laudert and backcourt mainstay Jackson. Both remained in the game with Jackson scoring to start the second quarter and Laudert hitting two buckets inside to bring the Crimson Bears to within two points, 11-9, before getting her third foul with 3:45 remaining in the quarter.

“If I always pull them after the foul, then they are always off balance,” Potter said. “They are worried about the fouls. And I want them to play and I want them to be relaxed. And obviously the way they are officiating Ashley here is different from what they experienced up north so we have got to make that adjustment. We need her on the floor.”

TMHS’ C. Baxter blocked a shot and fed Kookesh for a 13-9 lead but JDHS’ Hargrave hit a free throw and Grube tied the game on a shot past the arc with one minute remaining before the half.

C. Baxter was fouled on a made basket and hit the extra shot for a 16-13 lead but Tuckwood put her first steal on the books and scored to close to 16-15 at the halftime buzzer.

“When they are dribbling up and cross-over that is a really good time to steal it,” Tuckwood said. “I just look for that but I don’t really have a certain mindset. We all just really wanted to win. I have always been better at defense than offense. I get more scared on offense but also I am a lot more confident in my defense and I know that we have a lot of fast girls on our team so we can move our feet really well without reaching. Just moving our feet fast and getting to where we need to be on time.”

The Falcons often rotate who brings the ball up under pressure and at times the TMHS bigs had the ball.

“I consider that to be in Skylar’s favor,” Potter said.

Lee noted that Strong is the Falcons’ alpha-dog, “She’s not a point guard but she does everything. She carries the load for us so we let her bring it up a lot for us tonight… and Kiara (Kookesh) has sacrified her scoring to help handle the ball and is one of our more dominant defensive players.”

A Falcons free throw by C. Baxter started the third quarter but Tuckwood hit from deep to give the Crimson Bears their first lead of the game at 18-17.

Strong tied the game on a Falcons free throw but Tuckwood purloined her second ball, which led to a Hargrave hoop and the lead.

The Falcons’ Strong hit two free throws to tie the game at 20 and Tuckwood appropriated her third ball, which Hargrave turned into another score and a 22-20 Crimson Bears advantage.

Tuckwood got her fourth steal of the game with 1:10 left in the third quarter but C. Baxter blocked her shot and on the other end put in a basket to tie the game at 22.

TMHS sophomore Jaya Carandang hit a reverse layup with 19 seconds remaining for a 24-22 lead and the fourth quarter looming.

“We have some poise,” Lee said. “But I have to balance getting kids experience and allowing them to make mistakes with trying to win at the same time and that’s a tough balance. I can’t give up eight or nine points at a time when players are learning. So we are seeing a lot of kids play short minutes but we played nine deep every quarter.”

JDHS’ Laudert fouled out of the game in the fourth quarter with six rebounds but the Crimson Bears had board help throughout the game from senior Gabbi George-Frank with seven rips and Hargrave, who finished with seven boards and two blocked shots.

“I think that Mila (Hargrave) keeps getting better and better,” Potter said. “Her offensive output in that low-scoring of a game was huge. I feel like the more we play, we become less reliant on Skylar and Trinity. And Gabbi has improved her defense from last year. She is rebounding more and she is getting steals and playing with more confidence. Our philosophy is, with the players we have, they are free to make mistakes if the mistakes are being aggressive. The mistakes we don’t like are the mistakes of being passive.”

The Crimson Bears’ win completed a weekend road sweep over the Falcons. Tuckwood had four steals in Friday’s 47-37 win.

JDHS is 12-4 overall and 2-2 in the Southeast Conference. The Crimson Bears lost twice at Ketchikan, 41-32 and 42-35. JDHS has also defeated TMHS in a non-conference clash in the Capital City Classic in December, 36-26.

The JDHS girls play at Ketchikan Friday and Saturday and the TMHS girls play beginning Thursday at the Grace Christian Hardwood Classic in Anchorage. 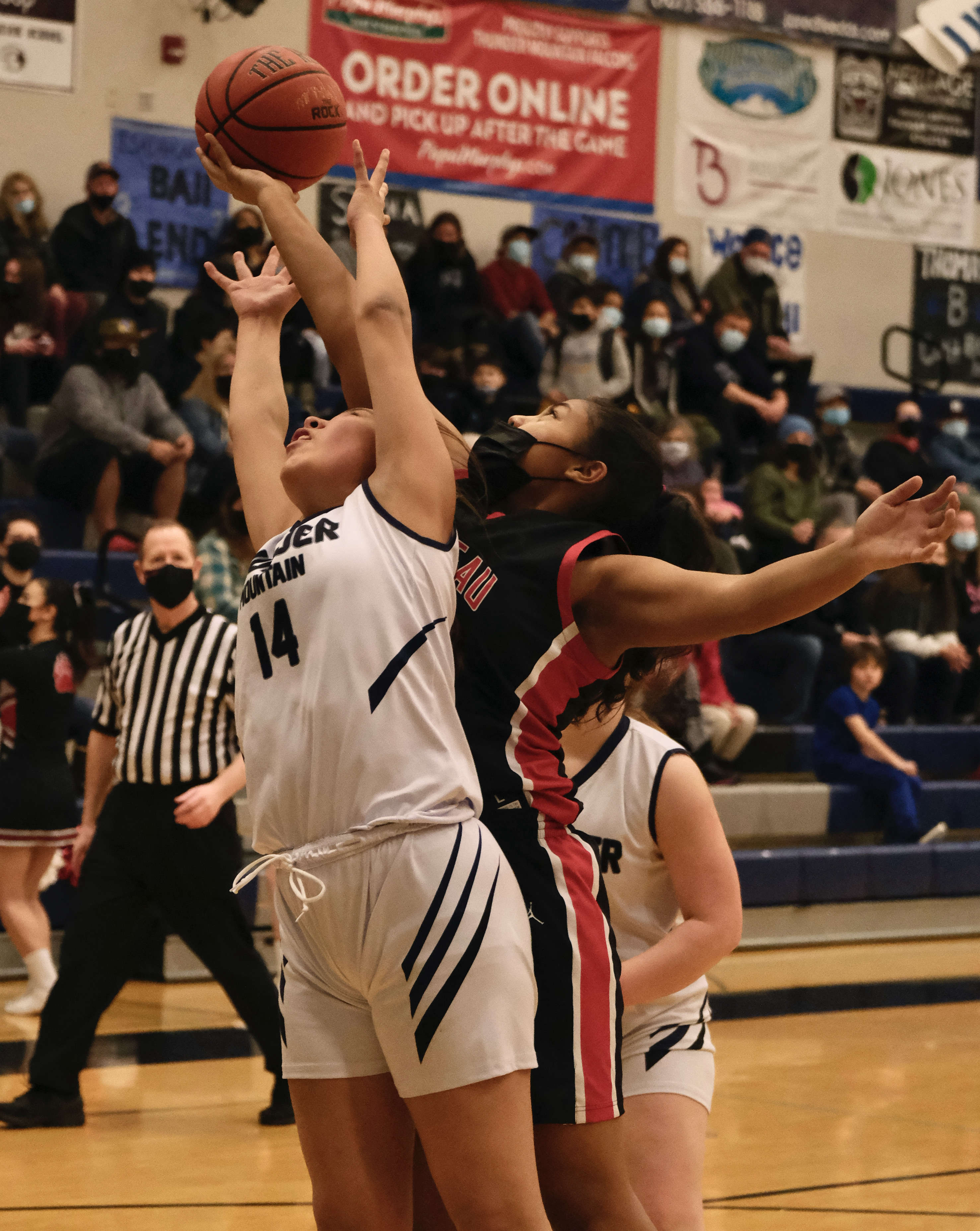 Above - TMHS junior Kiara Kookesh (14) and JDHS senior Gabbi George-Frank reach for a rebound during the Crimson Bears 42-33 win over the Falcons on Saturday. (Klas Stolpe) 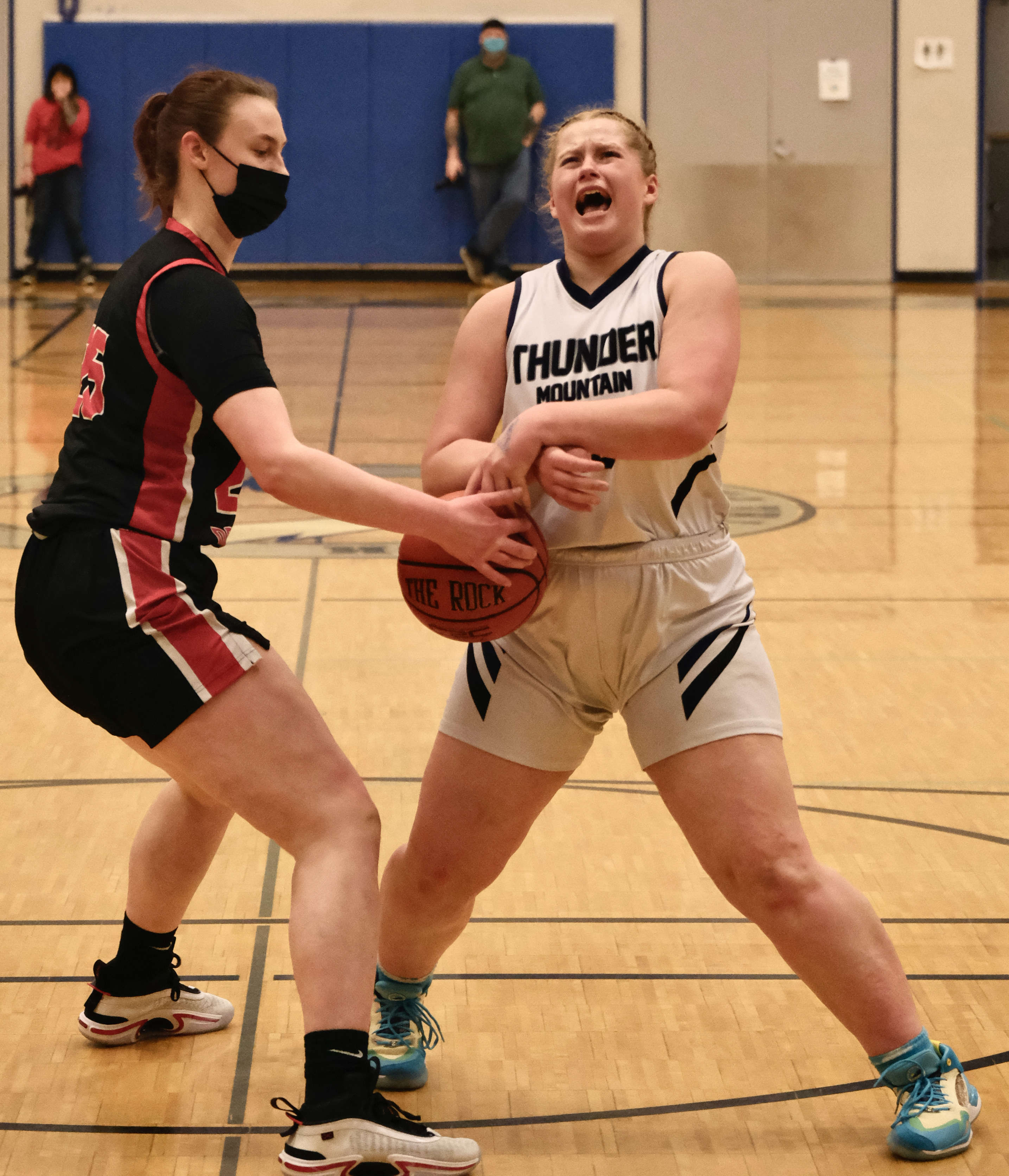 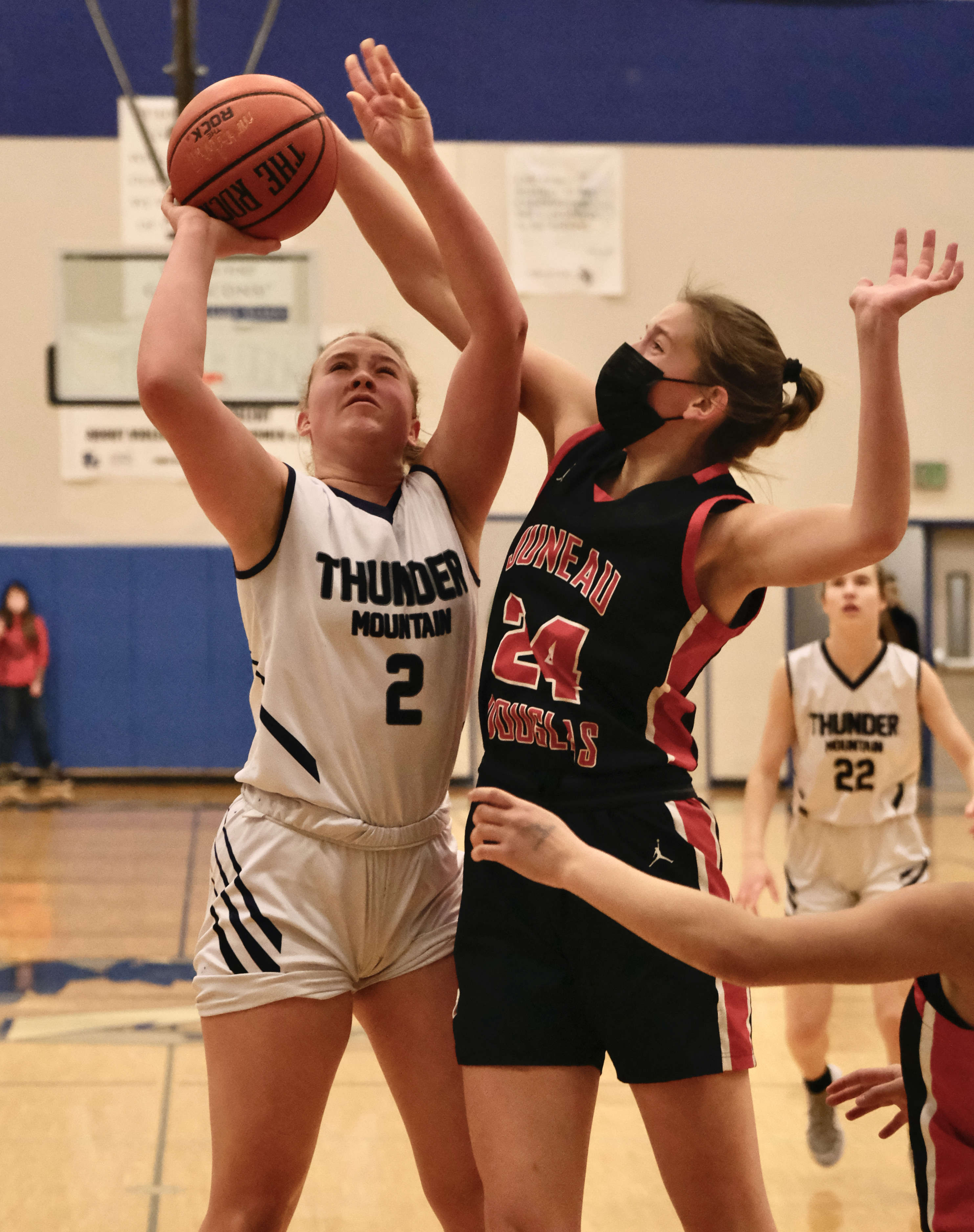