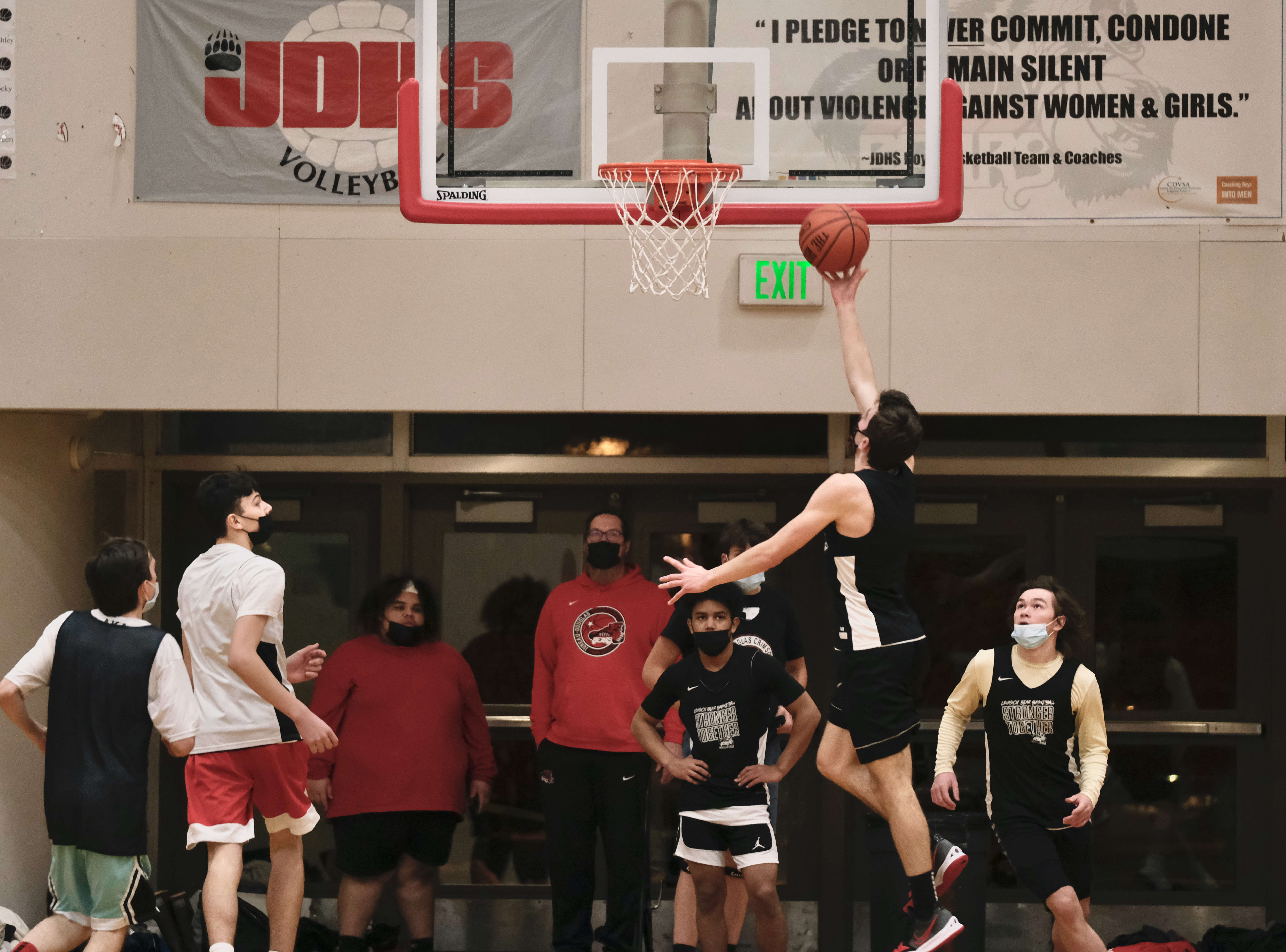 Juneau, Alaska (KINY) - Considered the top team in the state last season, the Juneau-Douglas Yadaa.at Kalé boys basketball team were one win away from a perfect season and a controversy away from the state tournament. The Crimson Bears graduated a roster that featured eight seniors, including one of the state’s best, Cooper Kriegmont, and a starting five that garnished nearly every team catagory award at the season’s end.

“Yeah, we graduated 95% of our scoring, 95% of our rebounding and 95% of our assists,” Crimson Bears head coach Robert Casperson said. “So really what we talk about is that the hole we are filling now is just an opportunity for the kids that are back. The scoring’s got to come from someone and it has got to come from them.”

JDHS only lost one game in conference last season, 78-70 in overtime at Ketchikan. The Crimson Bears avenged that loss with a Region V championship win over the Kings at Ketchikan 87-68 behind SEC most valuable player Kriegmont and classmates Garrett Bryant (best defense), Brock McCormick (most inspirational) and Ben Coutu (most hustle). However, the school district did not allow the team to travel to the state tournament in Anchorage due to coronavirus concerns, and Ketchikan took the state bid to play.

“It is what it is,” Casperson said. “It is unfortunate. Whether you win, lose or draw going up there, getting the experience does make a difference but we are just going to keep our heads down and focus on what is in front of us this year and hope to have the chance to go to state through our actions this year with a really difficult schedule."

That focus is four tough games this weekend at Las Vegas, three more back home in the Princess Cruises Capital City Classic, and a season of two tough Southeast Conference opponents with more returning experience.

“It always seems like our record goes out the window when we are playing a conference opponent or anything like that,” Casperson said. “In conference I’m okay with people saying we are third out of three teams this season. We have to earn it. And I absolutely understand why they would say that. I like that. I like that opportunity, that challenge for us.”

“I like the effort we have come out with in training and practices,” Carney said. “And it is a much longer season than last year so we have a lot of time to improve. Hopefully we can get on the right foot this week when we travel to Vegas. We have a fair amount of seniors on this team so we have a fair amount of leadership. Jake Sleppy is a main returning guy from last year and the year before. So I think we are all just hoping to build off of last year with our strong region finish. Hopefully we can bring the same effort and intensity as last year.”

“I’m seeing guys that are starting to step up and fill some of that leadership gap that you always have when you graduate seniors who were that experienced,” Casperson said. “So I appreciate seeing that is coming into play, and not just from our current seniors but from some of our younger guys. Some of those younger guys have played a lot of basketball and have a lot of experience understanding what we want to do and they are communicating with some of the new guys on varsity.”

Communication will be key as the Crimson Bears will play some major teams in their home den, including Wasilla and South Anchorage, aside from region opponents.

“I’ve never worried about wins and losses in December and January,” Casperson said. “You want to win at the end of the year. So having a top-heavy and tough schedule definitely exposes your areas of need and it gives you time to work on it.”

According to Casperson, Carney is among the interesting players to watch. Nelson can shoot the ball when dialed in and is tough to guard. Carrillo and Oliver have an ability to understand the game at a young age. Harris and Mesdag were noted for their athleticism and Dybdahl, at 6-foot-5 (with 6-foot-8 arms), has come a long way and has basketball lineage.

“It’s pretty neat,” Casperson said. “Sometimes he will wear something in practice, like an old shooting shirt, that was his dad’s (Travis). You know we just have overall some athletes in the mix.”

Casperson noted that Hawkins is a dynamic guard, Mulgrew-Truitt and Aline will compete for minutes and Hargrave is steady on the court.

“A calming presence for us,” he said of Hargrave. “I really appreciate his game. He makes good decisions, shoots a high percentage and at the end of the game he has eight points and six to eight rebounds, and three or four assists, and is probably the one that set some really good screens and got the guards open. He’s a throwback, an old school player. He doesn’t get off the floor much, nothing good is happening up there for him, so he blocks out.”

Casperson said the season will be a fight with Ketchikan and Thunder Mountain for who people think are No. 1 and 2.

“Or No. 1 and 1A,” he said. “But we don’t worry a whole lot about that. Our goal is to continue to get better. and we have proven that we can win regions from the three seed. We’re okay with whatever happens throughout the year as long as we keep improving and finding a way to get it done.”