Juneau, Alaska (KINY) - The weather that knocked out power in Juneau Friday night also caused havoc on the teams participating in the Region V Cross-Country Championships in Ketchikan on Saturday, delaying races and results through Monday, but not deterring the athletes who made the starting gun at the host’s Ward Lake 5K course.

“The conditions were really bad for the guys and the first three races,” Thunder Mountain senior Kiah Dihle said. “But for our girls race, we ran at the end of all the races, and we lucked out and it wasn’t that rainy. We missed the hail. There was lightning actually when some of the people were running. But we lucked out.”

Dihle won her second Region V title in a row with a time of 18 minutes 51 seconds. She said there is a different strategy for running in inclement weather.

“Definitely had to keep our warmups on until the last minute,” Dihle said. “Stay super warm and then run fast.”

Only the Division I races were finalized on Saturday due to teams missing the DII and DII starts.

The Juneau-Douglas Yadaa.at Kalé Crimson Bears girls won their eighth Region V team title in a row and 41st in the past 44 region championship races.

“Those were the best two-team efforts, combined, that we have had all season from our boys and our girls,” JDHS co-coach Tristan Knutson-Lombardo said. “Our girl’s team looked as solid as can be. They had their standout effort in Palmer a few weeks ago against the state’s top teams and they won that meet, and it just looked like a duplication of that effort again on the course.”

Dihle will be running in her fourth state meet.

“It’s exciting,” Dihle said of state. “There are a pack of girls who are pretty close together in times so I think it will be a close race. We’ll see who wins. Whoever is the most prepared, mentally and physically, will ultimately be the winner. So I’m excited to see.”

“That was a bit of pressure for sure,” Dihle said of the girls chasing her. “I think I lost them in the later half of the race. So it was a lot of running by myself which can be difficult. But it is exciting with people chasing you.”

Said Knutson-Lombardo, “It was really great to see Etta (Eller) pull away with a solid low 19-minute time to lead that girls team. And then to have our seventh runner Trinity (Jackson) be under 20 minutes 30 seconds, that is a highly competitive girls team. One that we probably haven’t seen since the Leah Francis, Annika Ord, Alice Ottoson-McKeen (2009 graduates) days.”

The Crimson Bears boys won their 32nd Region V team title in a row and 45th of the past 48 region championship races.

“On the boys side they really closed the gap from one to seven,” Knutson-Lombardo said. “I think they were about 40 seconds apart from the first runner to the seventh. That is a really strong, solid boys pack, especially considering we don’t really have a standout top runner it is really important that five, six and seven close that gap on our first runners.”

“Regionals was an exciting race complete with pouring rain and lightning at one point,” Thunder Mountain co-coach Topaz Shryock said. “We were proud of how all our runners performed there, with the majority of them pleased with their race performance. After Regionals, we have had almost every athlete on the team reach their personal record time. That felt good. Going into Regionals, we had figured that if that if all went well, we could have at least five athletes headed to state, which is what happened. Others were close. We look forward to them having a chance to qualify next year.”

“Usually I preview the course pretty thoroughly before,” The Falcons’ Dihle said of her previous three state trips. “Last year it was at Kincaid Park (in Anchorage). I have only raced on Bartlett twice. Those girls have an advantage for sure, they run there often. I am at a bit of a disadvantage but I’ll just preview the course thoroughly and get it as it comes. It’s constant rolling big hills, a real difficult course. I feel a little more comfortable than last season. This year we get to run with more people so it will be easier to see what place I am in as we are running, so I am excited definitely.”

“It has really been important for Tristan and I and the team this year to kind of get rid of what the word ‘time’ means,” Ellefson said. “Time doesn’t mean anything anymore, it is ‘place’ and our relationship to one another out there. When you look ahead to the next week you think neither team needs to do anything different because what happened is we understood it. That has been one of our goals this year, that the squads understood what it meant to work together with their best individual effort to really coalesce as a team. Given that they closed the gap on one another and stair-stepped so well in the place that they are, they are just poised to go up to Bartlett and utilize everything we have learned this year to have some pretty good outcomes. And for us they are not really related to time, they are related to place.”

Only one of the two Division II teams, Mt. Edgecumbe, arrived in time to race and opted not to run due to the weather. The Braves and Lady Braves decided to return to Sitka on Sunday and race with their conference rival Sitka High School at Totem Park on Monday at 4:15 p.m. The top team and top 10 individuals (in each boys and girls race) qualify for state.

Wrangell arrived too late for the Division III races on Saturday and ran by themselves on Sunday and their scores were added to finalize the DIII results.

The top three teams in each of the girls and boys DIII races (and all team members) and the top 15 individuals in each race qualified for the state championships. 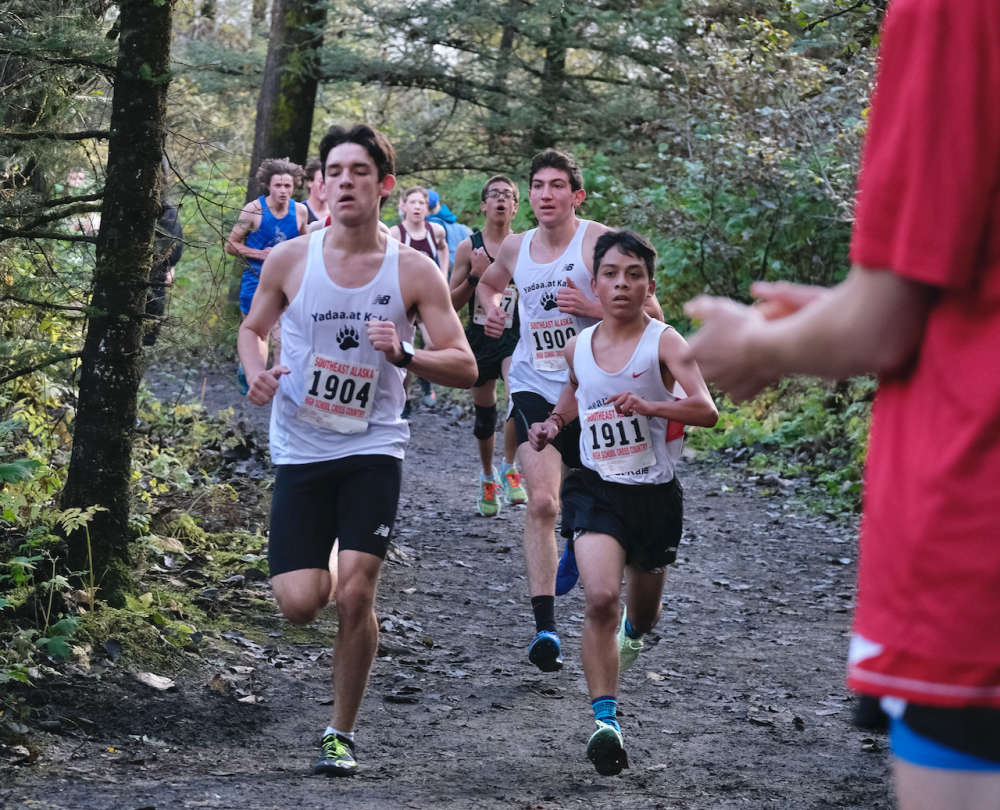