Doing It For The A: Alaska’s First Olympic Swimmer is Golden 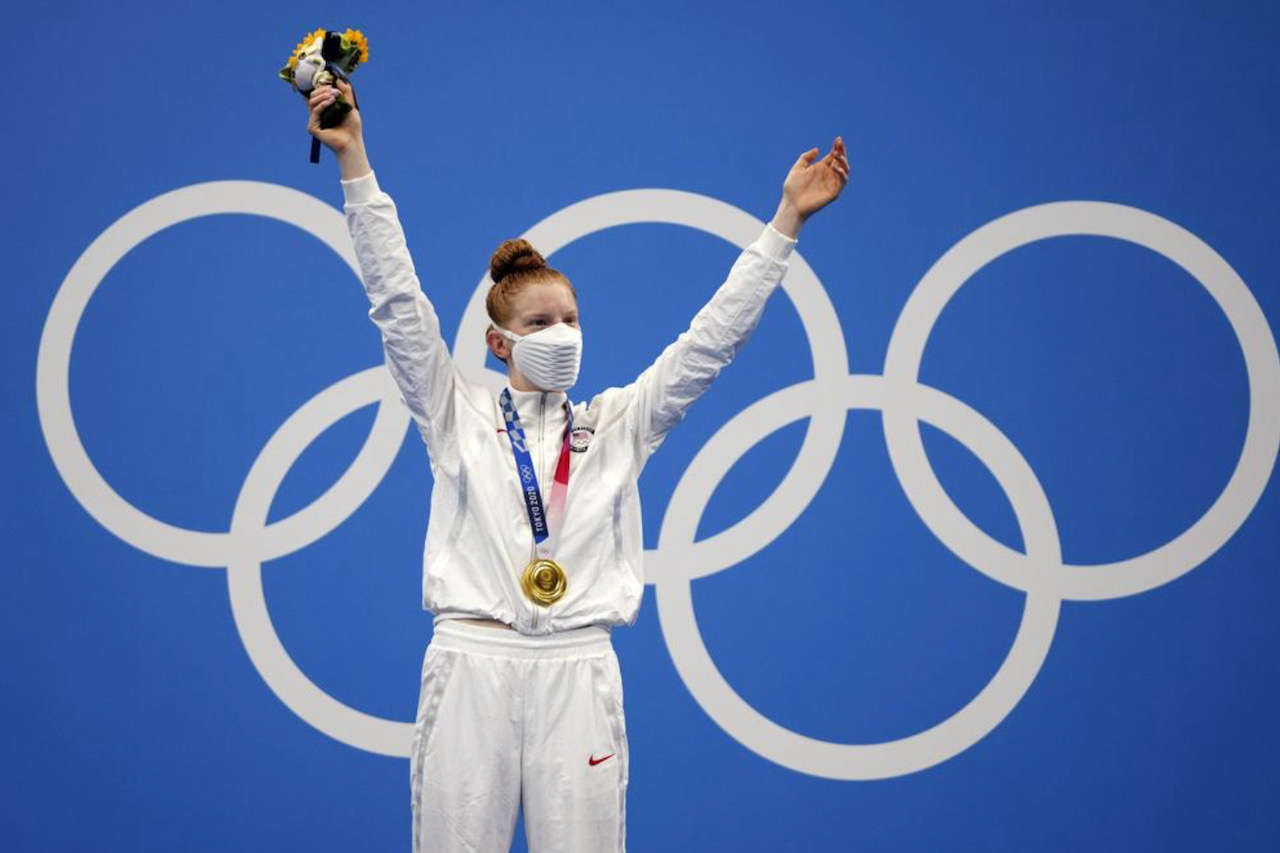 Gold medalist Lydia Jacoby celebrates on the podium after the final of the women's 100-meter breaststroke at the 2020 Summer Olympics, Tuesday, July 27, 2021, in Tokyo, Japan.(AP Photo/Matthias Schrader)

TOKYO (AP) — When you’re a swimmer from Alaska, there are some misguided stereotypes that must be laughed off.

Lydia Jacoby has surely heard them all before.

Jacoby does her swimming at a pool, though even that has been a bit of a challenge during the coronavirus era.

Jacoby, a 17-year-old who hails from tiny town of Seward, Alaska (population: 2,773), pulled off a stunning upset in the 100-meter breaststroke Tuesday, knocking off defending champion and fellow American Lilly King.

Jacoby had already distinguished herself as the first swimmer from the 49th state to make the U.S. Olympic swimming team.

She capped her remarkable journey with the biggest prize of all — before she even starts her senior year of high school.

“A lot of big-name swimmers come from big, powerhouse clubs,” Jacoby said. “Me coming from a small club, in a state with such a small population, really shows everyone that you can do it no matter where you’re from.”

Other athletes chimed in on Jacoby’s accomplishment.

“Thinking this is why we watch sports,” two-time Masters champion Bubba Watson tweeted. “To see a 17 year old from Alaska take the gold. Amazing stuff!!”

Jacoby grew up around the water.

Her parents are both boat captains, taking tourists on whale-watching tours off the stunning Alaskan coast. The family also has a sailboat, so their daughter joined a local swim team at age 6.

“They just wanted me to be safe in the water,” she said.

Before long, she was swimming faster that everyone else her age.

“When I was about 12, I broke my first state record,” Jacoby recalled. “That was kind of when I realized it was something that I excelled at.”

Not that she’s a one-hit wonder.

“In my town we used to have a bluegrass camp for kids every summer,” she said. “We eventually formed a band and played together five or six years at different festivals in Alaska.”

Jacoby is one of those who benefitted from the Olympics being pushed back a year because of the coronavirus pandemic, though it didn’t always seem that way. Her local pool closed as COVID-19 spread around the world, forcing her train at a pool about 2 1/2 hours away in the state’s biggest city, Anchorage.

She had qualified to swim at the U.S. Olympic trials in 2020, though she didn’t have much shot of making the team.

In fact, her family had already made plans to visit Tokyo as spectators, planning to soak up the atmosphere and give Jacoby an idea of what she’d be chasing in 2024.

Of course, the pandemic changed everything. Jacoby kept training and knocking off time at a dizzying rate, greatly improving her chances by the time the trials were finally held last month. She qualified in the 100 breast, claiming the second spot on the team behind King.

“I definitely knew she was a threat and saw a lot of myself in her,” King said.

Jacoby believed she had a shot at a medal in Tokyo, but she never thought it would be gold. King was still considered the swimmer to beat, and South Africa’s Tatjana Schoenmaker posted the fastest qualifying time in the semifinals.

Schoenmaker jumped ahead on the first trip down the pool, with King in frenzied pursuit. Jacoby was third as they made the turn, but the teenager — her head bobbing furiously in the water — zipped past King and glided to the wall just ahead of the South African.

“I just wanted to help her out as much as I could, and unfortunately, I helped her out a little too much,” King joked.

Back in Alaska, where Jacoby’s friends and family were holding a watch party in the late afternoon, the place went nuts when the “1” popped up beside her name.

Jacoby whipped around to check out the scoreboard, looking a bit stunned at what she saw. It didn’t really seem to sink in until Schoenmaker reached across the lane rope to give her a hug.

King quickly joined them, bounding over two lanes to congratulate her young protégé.

“I was definitely racing for a medal. I knew I had it in me,” Jacoby said. “I wasn’t really expecting a gold medal, so when I looked up and saw the scoreboard, it was insane.”

After being home schooled last year during the pandemic, Jacoby will return to Seward High School this fall for her senior year. After that, she head to the Lower 48 to attend the University of Texas, where she’ll fit right in on the Longhorns’ powerhouse program.

“I have been representing my state for a long time, since I was really little,” Jacoby said. “It just means a lot to have them continuing to back me.” 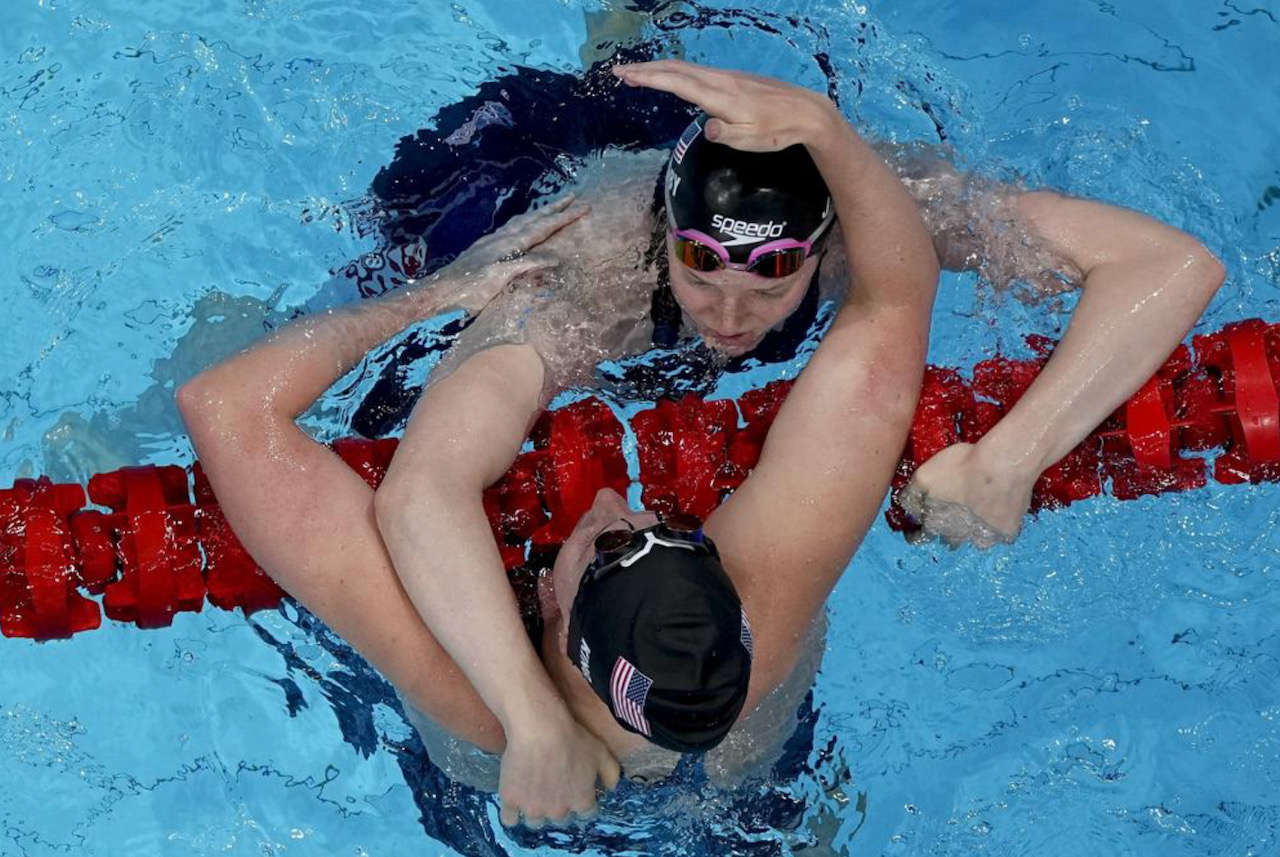 Above - Lydia Jacoby, of the United States, is congratulated by teammate Lilly King after winning the gold in the final of the women's 100-meter breaststroke at the 2020 Summer Olympics, Tuesday, July 27, 2021, in Tokyo, Japan. King won the bronze. (AP Photo/Morry Gash)

Below - Gold medalist Lydia Jacoby, left, of the United States, is embraced by bronze medalist and compatriot Lilly King after winning the final of the women's 100-meter breaststroke at the 2020 Summer Olympics, Tuesday, July 27, 2021, in Tokyo, Japan. (AP Photo/Matthias Schrader) 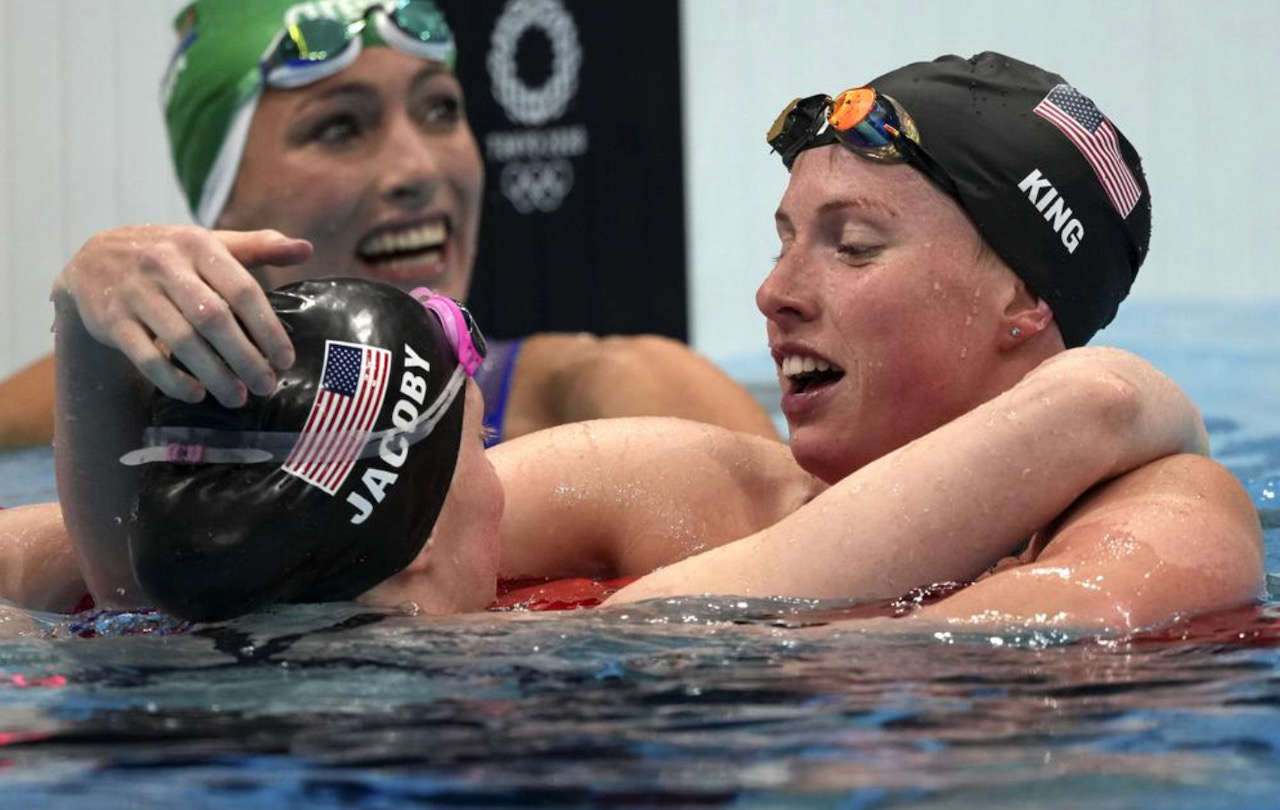