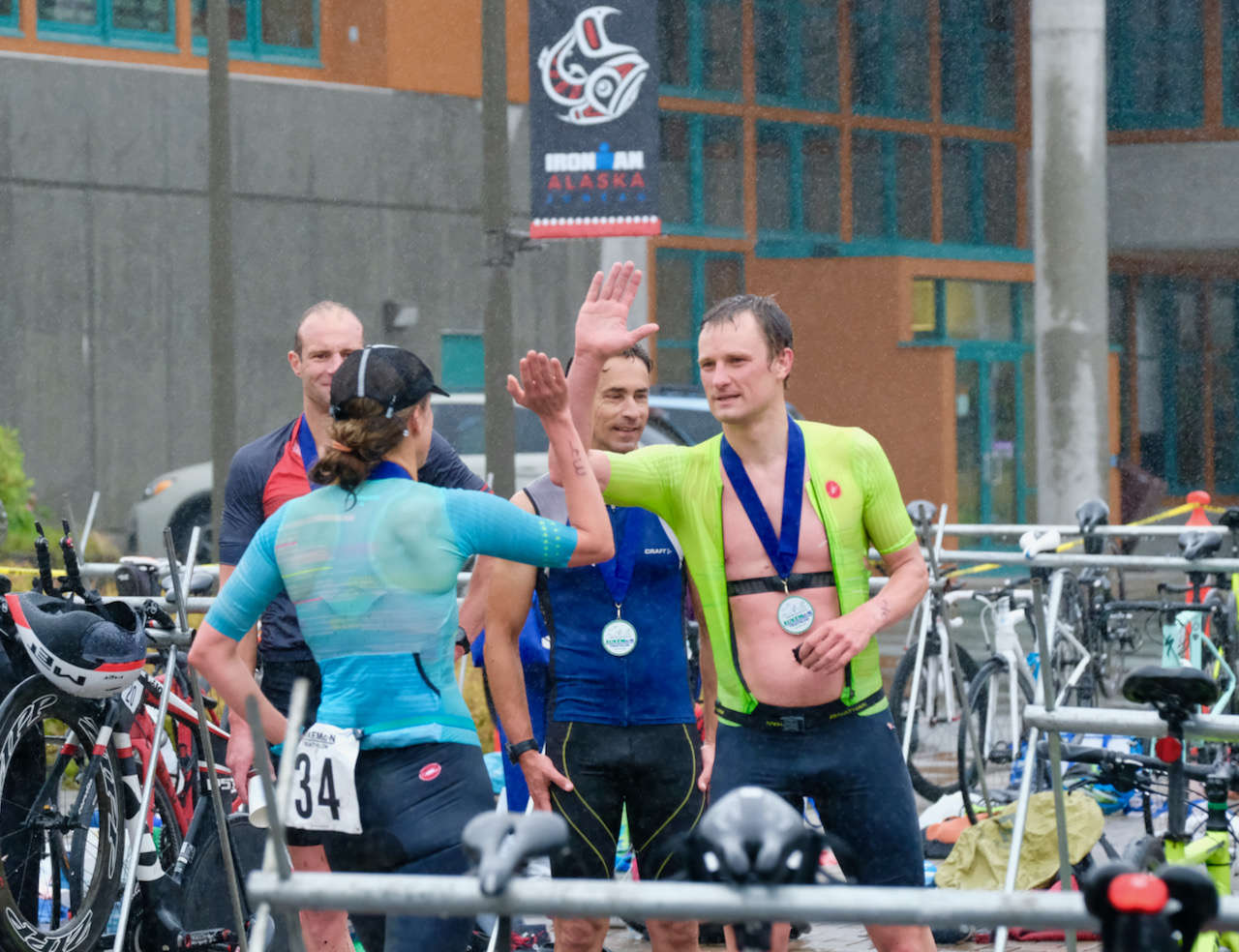 Juneau, Alaska (KINY) - The Dorn household will be sporting extra bling - when medals dry out from a day of Southeast downpour - as husband and wife Justin and Eliza Dorn swept the top placings at the 2022 Aukeman Sprint Triathlon on Sunday.

Justin Dorn, 39, had the top overall time of one hour six minutes and 34 seconds along the 750-meter Auke Lake swim, 19K roundtrip bike ride to the Mendenhall Glacier and 5K run along the Auke Lake trail. Eliza Dorn, 38, was the top female finisher and fourth overall in 1:13:20.

“It was really fun,” Eliza Dorn said. “I love this race. We have been doing this race for a long time… maybe since it started or shortly thereafter… This year was fun. There were so many people, so many new triathletes and then also so many that are training for the IRONMAN and I am looking forward to doing that next weekend so it was a little different to try and get in some speed today… it was just fun. I wanted to have a shake out, practice transitions, get some of the energy of a race… The swim was a lot warmer than I expected. The water feels like it warmed up and the rain, once you are moving, it's not bad…”

The Aukeman featured a multiple stage start by sex and age group, so the competitors only knew that passing other participants meant gaining time.

John Bursell, 58, was the first athlete out of the water but also was in one of the first stages entering. Dorn, who started in a later stage and never passed his elder competitor, had a better time.

Bursell said, tongue in cheek, “I think the perfect weather helped a lot…”

J. Dorn concurred. “It’s good it wasn’t too hot, much better this way…”

All kidding aside the two triathletes are strong contenders for their age group in next week’s IRONMAN Alaska.

“Really for me I just paced it,” Bursell said. “I think I had good pacing and felt comfortable with that. My bike worked and my goggles didn’t fall off so I had good luck there.”

Dorn said, “My secret was having John in front of me. He’s my rabbit…”

Dorn said the Aukeman was always an intimidating race,  “but now that I have been training big volume, all these distances start to feel a little easier… You do those pretty regularly. I think mentally just going into it feeling like you know you can do these things and like John said you start to understand pacing a little bit better…”

“This was an opportunity to make sure all the gears working and you have your equipment figured out,” he said. “I learned a few things today that I am going to incorporate into the race next week.”

The fastest swim times went to Pacific Ricke, 15, and Anita Morrison, 16, who used their Glacier Swim Club and high school experience to cut through the water in their first Aukeman in 0:10:42 and 0:11:13, respectively.

“It was my first triathlon of any sort,” Ricke said. “I just sort of went for it and hoped that it would work out… I’ve been swimming and I ran during track season but… I would be down to trying a few more, it was pretty fun…”

“This is the first time I have swam in the lake,” Morrison said.

She said the run was the hardest part of the course, “Because I am a swimmer. So swimming is easy. Biking was a little bit more challenging but running was definitely the hardest…”

The fastest bike legs were put in by J. Dorn, who flew along the Back Loop Road and to the Mendenhall Glacier Visitor Center and back in 0:28:14 and Bursell who rocketed along in 29:20. Brandon Ivanowicz, 40, had the third-fastest bike time with 0:31:02 and placed third overall in the race with 1:10:41.

Ivanowicz also posted the quickest run time, hitting the pavement and dodging the trail roots for an out and back of 0:20:47.

Athletes were treated to thunderous applause at the finish. Some had family members and fans run them across the line.

“It was so much fun,” Hulson said. “It was awesome. He decided to run with me and then we sprinted it out. He’s pretty fast, even with his slips on…”

While Liam noted it was fun to sprint with his dad, on the topic of doing triathlons he said, “No. I don’t think so.”

P. Hulson has been training for the IRONMAN Alaska.

“It has been intense,” he said. “It has been a lot of time away from the family that I didn’t quite anticipate but it is almost over.”

One athlete did not finish the course and 17 who were registered did not start. 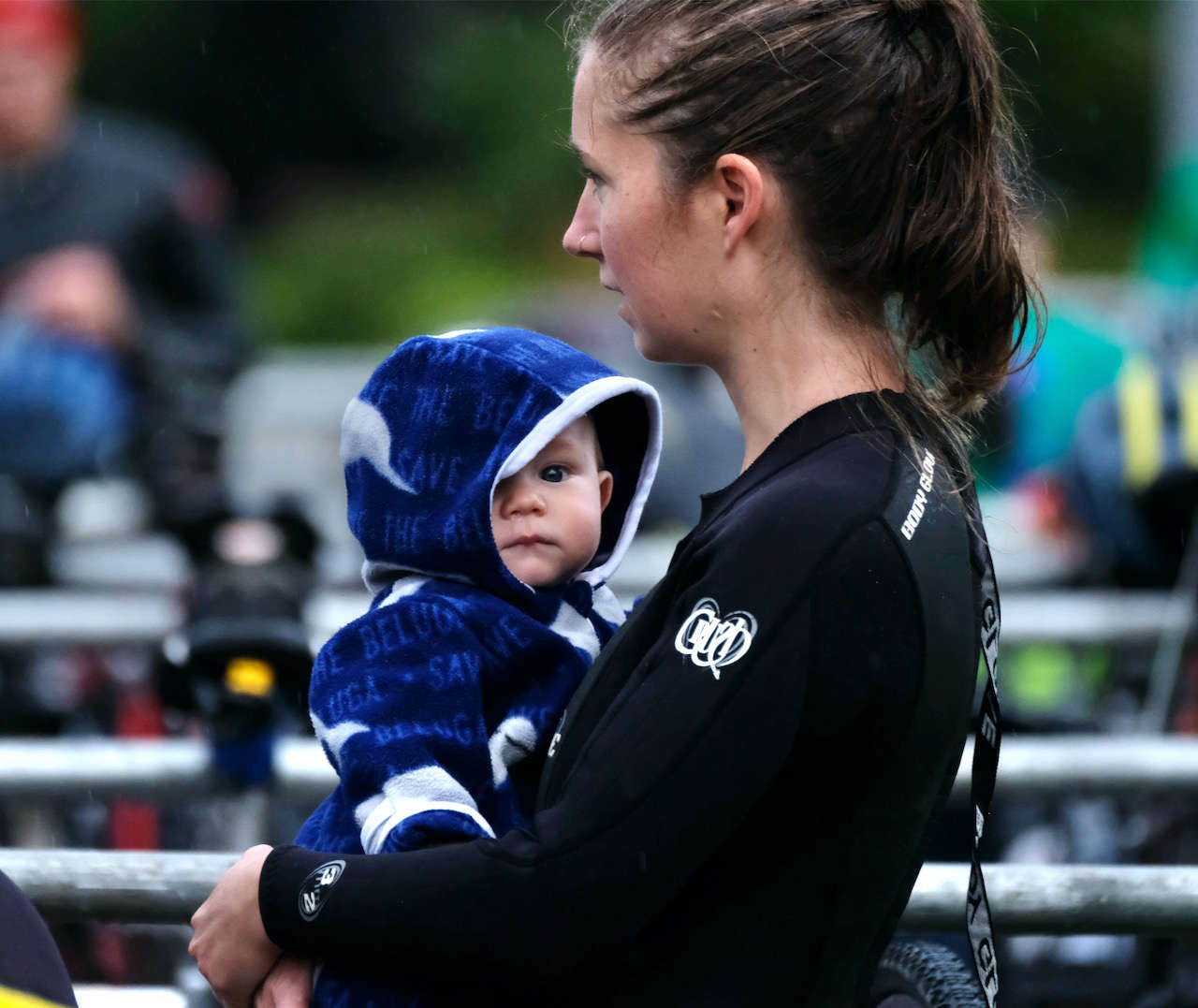 Above - Owen Hollarsmith attends his first Aukeman Sprint Triathlon. A slideshow is below, followed by posted results. (Klas Stolpe/KINY) 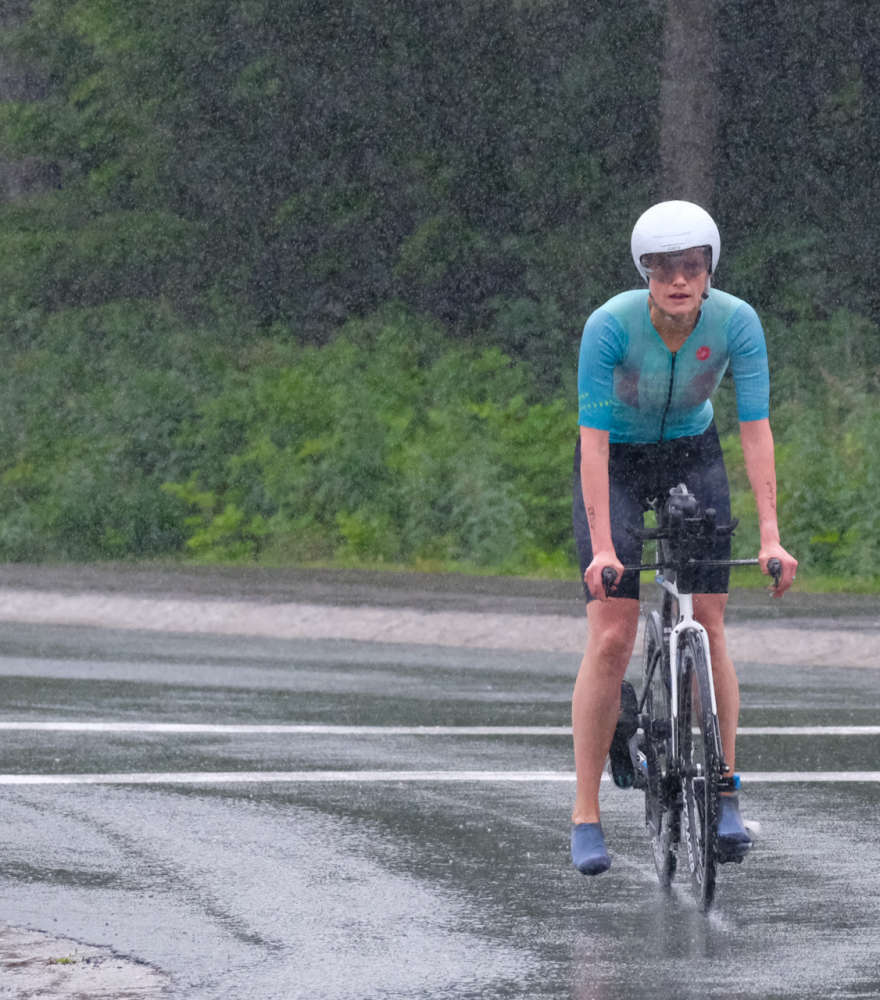 Results are listed below: 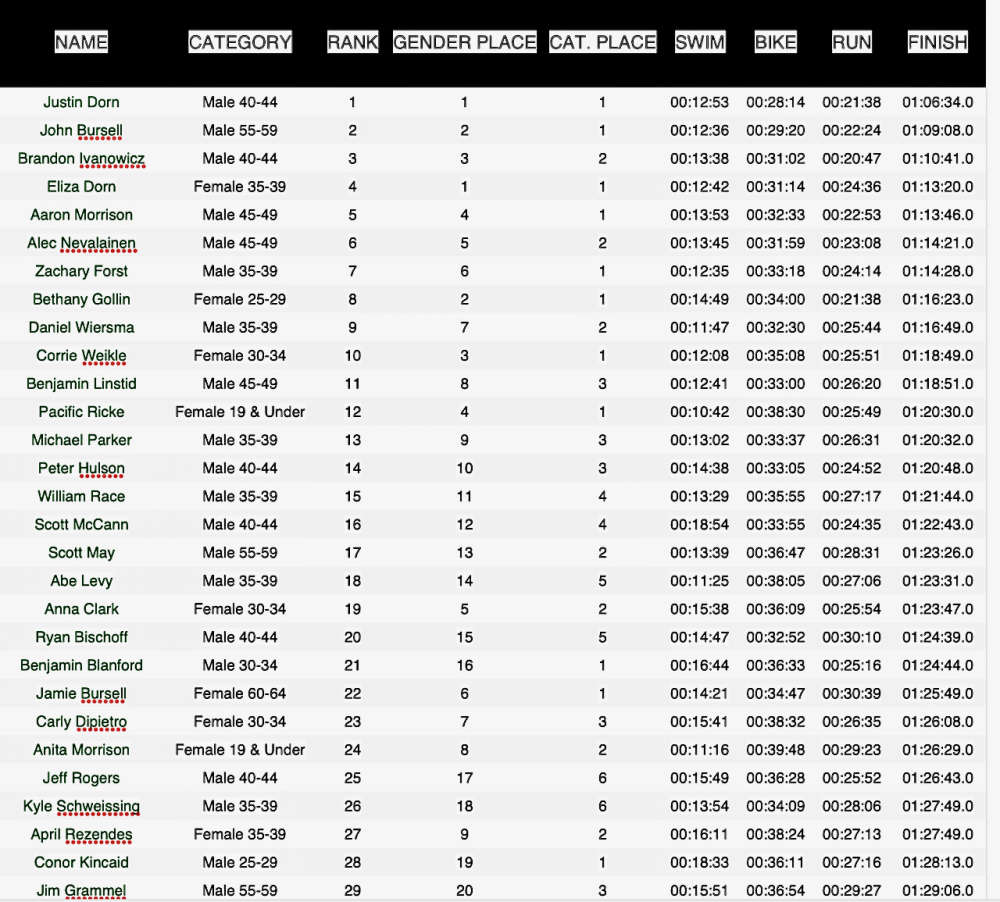 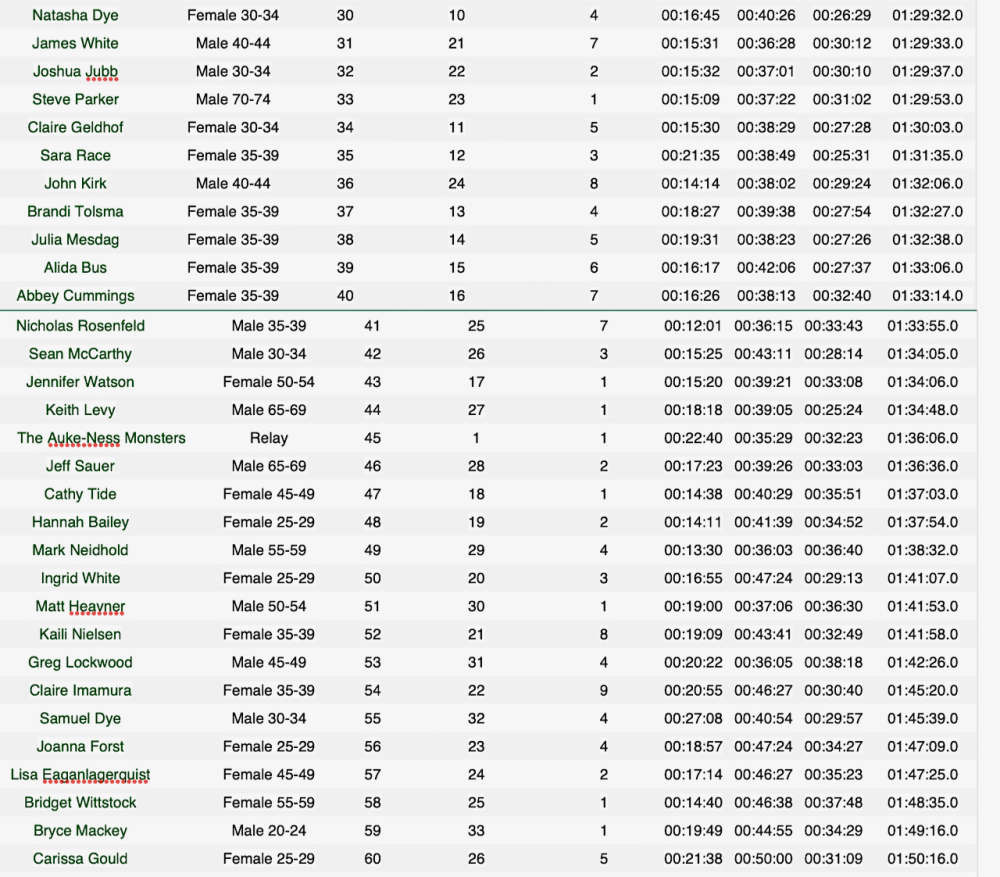