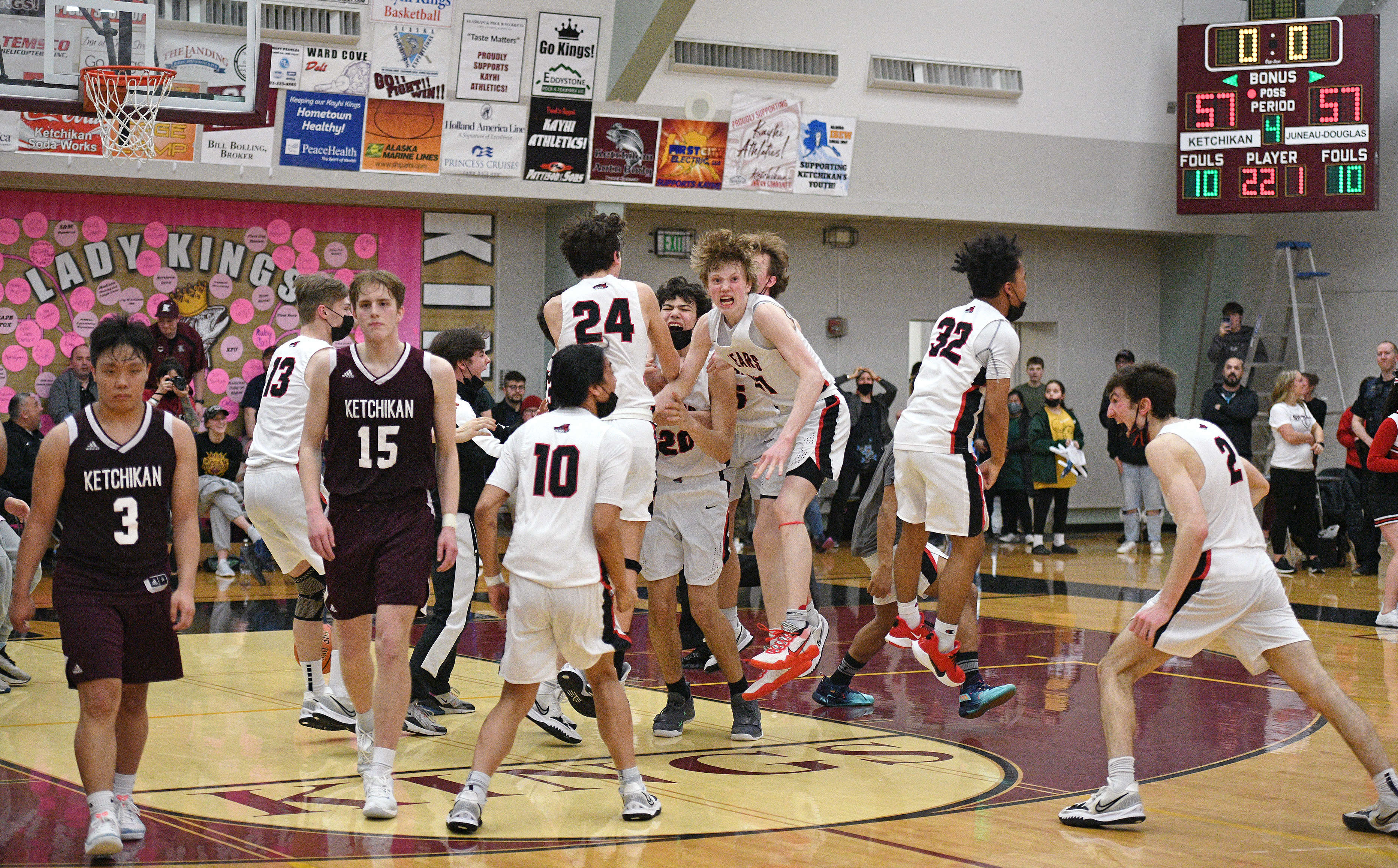 Juneau, Alaska (KINY) - Crimson Bears senior Tias Carney stole an inbounds pass and put up a prayer that was answered by junior Orion Dybdahl with a rebound Region V 4A Championship bucket, giving the Juneau-Douglas High School: Yadaa.at Kalé boys basketball team a trophy and a title over the Ketchikan Kings 59-57 in Kayhi’s Clarke Cochrane Gymnasium on Friday night.

“Gosh, there are just so many things running through my mind,” JDHS coach Robert Casperson said after the game. “What an exciting finish, what an incredible atmosphere… you know the boys, I am so proud of them for how they never gave up, just kept battling and made little plays here and there… just kept scratching and clawing and fighting… I’m still soaking it all in…”

JDHS trailed 56-49 with one minute remaining in the game when Dybdahl hit a shot from the arc to cut the Kayhi lead to 56-52.

Kings junior Joeben Lorenzo hit a free throw for 57 and Dybdahl scored inside to trail 57-54 with 36.5 seconds left.

Lorenzo missed two free throws for the Kings and a jump ball on the rebound went to the Crimson Bears.

JDHS sophomore Sean Oliver hit one of two free throws to trail 57-55 and Kayhi called time out to set up a final play.

That Kings play was thwarted by the hustling defense of Carney, who touched the ball and in one motion put a shot on glass for Dybdahl to caress into the net for a trip to the state championships March 23-26 in Anchorage.

“I really just saw Tias (Carney) get the steal and him go for the shot,” Dybdahl said. “And I thought he was going to make it and I saw him miss and I went for it. If he didn’t get that steal we wouldn’t have won it… It was all really quick but watching it go through and hearing them say it was good was really good to hear… First thing I did was run over to my team. I wouldn’t be able to do it, and we wouldn’t have gone so far if we didn’t stay together and fight through it.

JDHS sophomore Alwen Carrillo stole the ball from Kayhi’s Lorenzo and put in the first basket of the game for the Crimson Bears but Kayhi answered with a basket by senior Josh Rhoads.

“When I got the steal and made the bucket it kind of gave me, like, adrenaline,” Carrillo said. “I looked at my teammates on the bench… and it kind of gave us momentum a little bit in the beginning of the game..."

Dybdahl scored twice inside for the Crimson Bears but the Kings’ Lorenzo answered each bucket with one of his own from past the arc for an 8-6 Kings lead.

Kayhi junior JJ Parker stole the ball and was fouled, hitting one for a 9-8 lead.

Carney answered for the Crimson bears and junior Clayton Olstad and Rhoads for the Kings for a 13-8 lead.

JDHS senior Jake Sleppy hit two free throws and Parker did the same for the Kings.

Dybdahl scored to close to 17-13 but Parker hit at the buzzer for a 19-13 lead after eight minutes.

JDHS hit just one field goal in the second quarter but went 10-14 in the stanza from the free throw line and 12-16 in the half.

“Ketchikan was playing on a lot of emotion and probably adrenaline, and working extremely hard,” Casperson said. “They played really well throughout that game and the first half. And they defended us well. We had to try and figure out a few different things to manage some fouls and stuff like that, guys getting into foul trouble.”

The Crimson Bears opened the second quarter with junior Chris Harris being fouled. Harris received a technical for taunting but made both of his free throws to close to 19-15.

The Kings did not score on the technical free throws but junior Archie Dundas scored off glass on the possession for a 21-15 lead.

JDHS sophomore Kai Hargrave hit a free throw and Dundas answered for Kayhi with a basket past the arc for a 24-16 lead. Olstad added a steal and a basket for a 10-point advantage with 3:55 remaining.

Rhoads scored inside for a 28-18 Kings lead and Hargrave answered for the Crimson Bears’ lone field goal in the stanza to trail 28-20.

Olstad hit past the arc for a 31-20 Kings lead but the Crimson Bears answered with free throws by senior Alyx Bohulano, Carrillo and Carney to trail 31-24.

A last-second foul by the Crimson Bears put the Kings’ Lorenzo on the line and he hit a pair for a 33-24 advantage at the half.

JDHS’ Carrillo hit two free throws to open the third quarter and Oliver scored on a reverse layup to cut the lead down to 33-29 but Rhoads put Kayhi up 35-29.

JDHS’ Oliver and Carrillo hit from the free throw line to close to 35-31 but Kayhi’s Parker scored for 37.

Carrillo buried a shot past the arc to pull the Crimson Bears to 35-34 and Oliver did the same to tie the game at 37-37, and senior Porter Nelson hit for a 39-37 lead.

Parker stole a ball and hit past the arc for a Kings 45-41 lead and sophomore teammate Andrew Kleinschmidt hit a buzzer beater from the arc for a 48-41 advantage with eight minutes left to play.

“I just thought guys really stepped up,” Casperson said. “We were going defense for offense down the stretch. We had three guys with four fouls and so we are switching, in and out, three guys each possession and everyone was just ready and did their job… it made a big difference for us…”

JDHS began to whittle down the Kayhi lead, forcing a five-second count to open the fourth quarter and getting a free throw by Oliver.

Carrillo would miss the opening seconds of the final stanza with four fouls, but Casperson inserted him in the lineup quickly.

“I think I sat him for the first minute,” Casperson said. “And then I just kind of figured, ‘well, there there is no rule that says he is going to get the next foul and foul out. He’s got a 20 percent chance, let’s get him back out on the court and see what happens.’ It is better to have him out there and roll the dice than just have him chomping on the bit on the bench.”

Rhoads scored to give Kayhi a 50-42 lead by Carrillo blocked a shot, gathered the ball and dribbled the length of the court for a score to trail 50-44 with under four minutes to play. Nelson added a shot for the Crimson Bears to trail 50-46 with 2:55 left.

Lorenzo scored for the Kings and was fouled. Kayhi got a technical foul on the bench. Lorenzo missed the free throw but the Crimson Bears’ Oliver hit one of the penalty free throws to trail 52-47 and on the possession JDHS junior Kai Hargrave scored to trail 52-49 with 2:19 left in the game.

Dybdahl had a block for the Crimson Bears but Lorenzo stole the ball and Parker was fouled and hit two free throws to give the Kings the 56-49 lead that would initiate the JDHS stunning comeback down the stretch.

“I finally got my full team back about three weeks ago,” Kayhi coach Eric Stockhausen said. “And where we were then, from when you saw us in Juneau to where we ended up this weekend with two incredible, intense and physical games within a seven hour stretch, I couldn’t be more proud of my kids. We’ve improved a lot. We’ve fought as hard as we could. Of course we give credit to Juneau, they made some great timely plays at the end and capitalized on things we left out there unfinished. They beat us five times this year. They had our number. We improved a ton, gave it our best effort and sometimes you just have to make plays… this was a healing time for all of Southeast to have some normalcy and enjoy watching kids playing their hearts out from both communities in every single game… it was great to have a Southeast tournament with all the bands, the dance, the cheer, it’s why Southeast is the best basketball aura in the state…”

With the tourney championship, JDHS finishes 6-4 in the Southeast Conference and will take a 9-18 overall record into the March Madness Alaska 2022 3A/4A Basketball State Championships at Anchorage’s Alaska Airlines Center, March 23-26.

JDHS opened tourney play with a 60-53 win over Kayhi on Thursday. 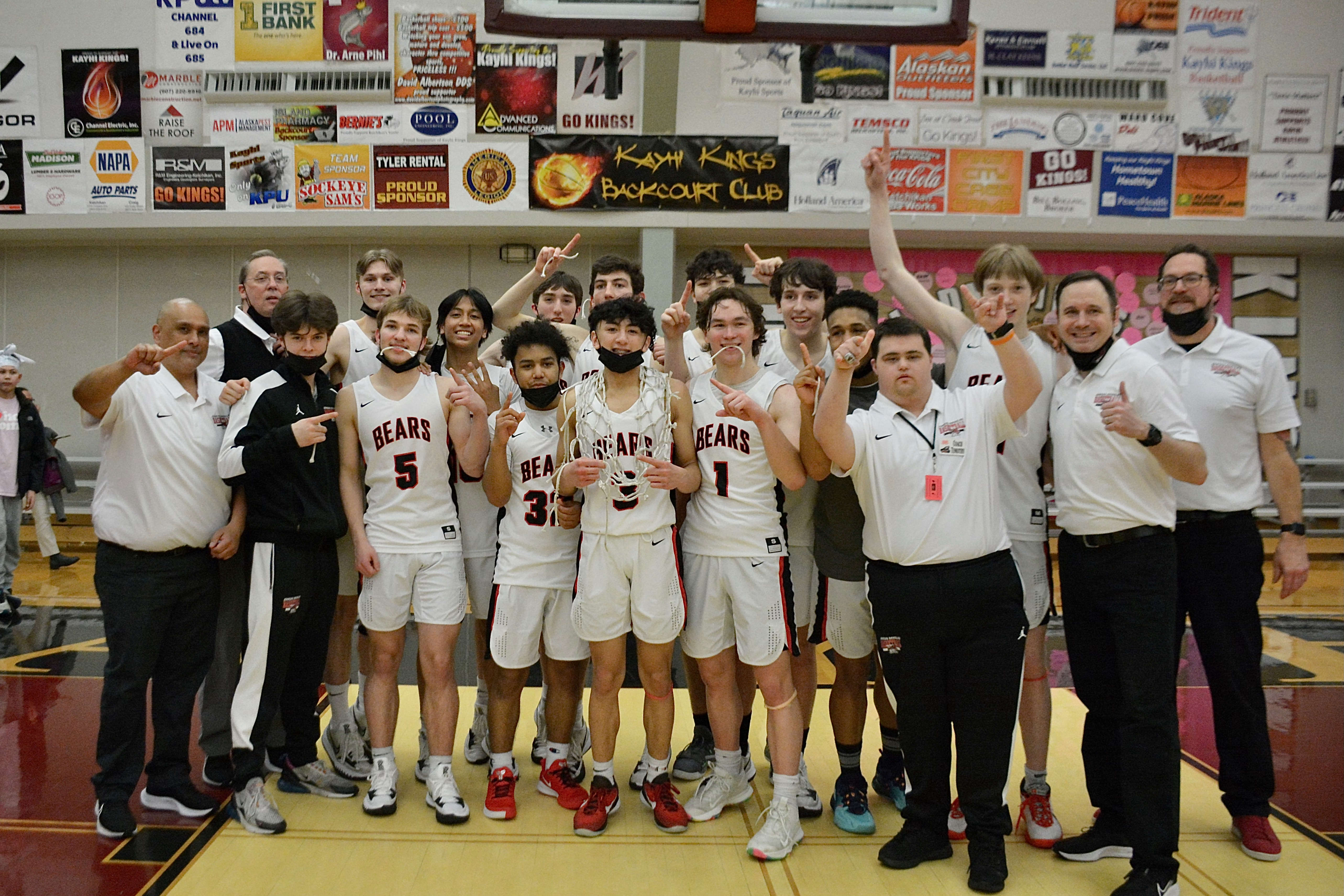