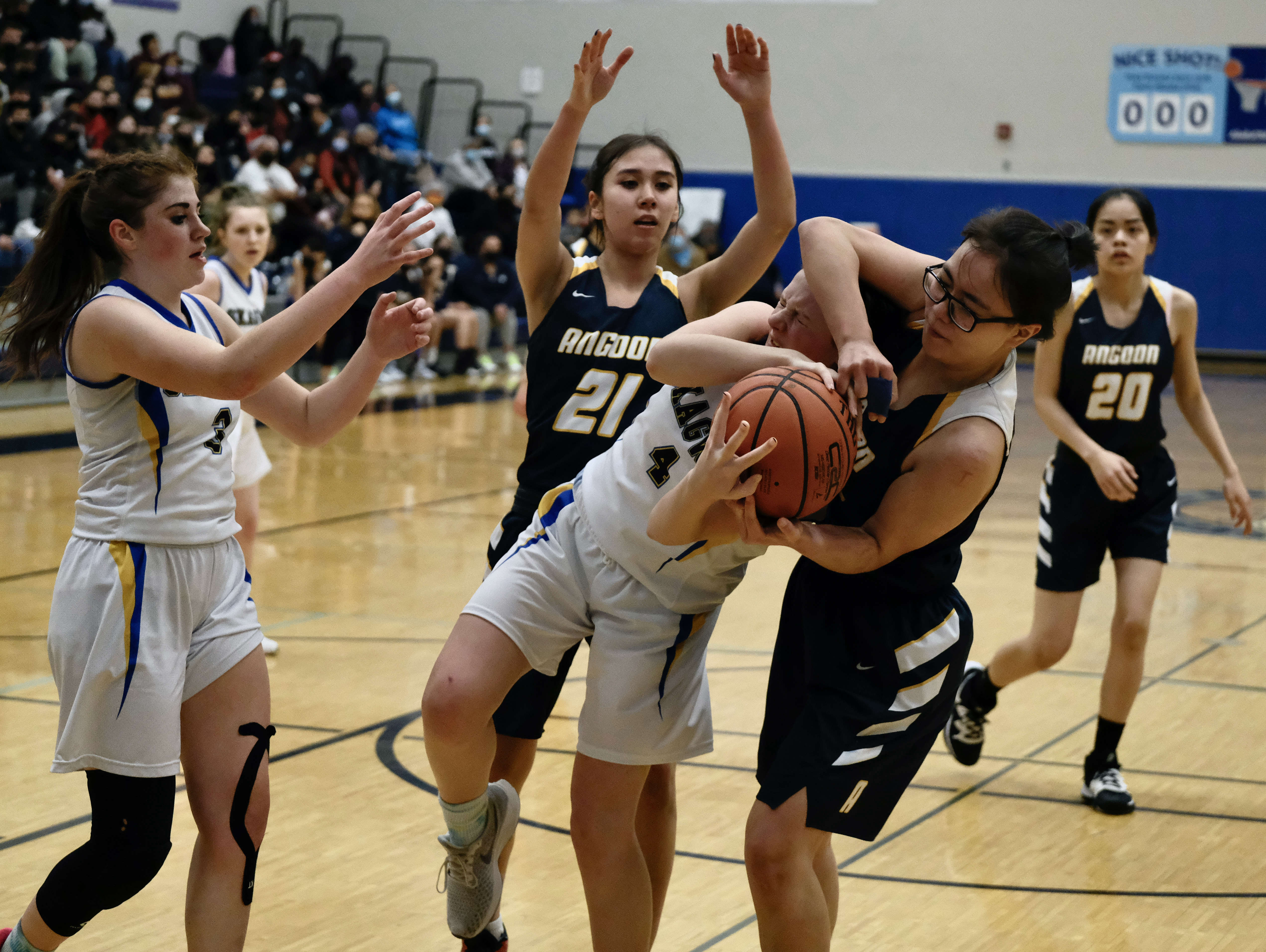 Juneau, Alaska (KINY) - Angoon junior Cheyenne Kookesh scored a game-high 20 points to lead the Eagles to a 37-32 win over the Skagway Panthers in the opening day of action at the 2022 Southeast Region V 1A girls basketball tournament at Thunder Mountain High School.

The game began as a slow scoring affair with Skagway senior Tatum Sager hitting the first basket of the game on a drive through the lane and the lead would hold until 1:50 remanned in the stanza.

Angoon sophomore Zara Fayer hit from past the arc for a 3-2 lead and junior Taryn Kookesh added a bucket for a 5-2 Eagles lead after eight minutes of action.

Skagway opened the second stanza with a basket by Sager and a free-throw while Angoon’s Fayer hit one from the charity stripe and C. Kookesh scored her first two points of the game on a pair of free-throws for an 8-5 lead with two minutes left in the first half.

Skagway sophomore Athena Smith hit a shot past the arc to tie the game at 8-8 heading into the half.

Angoon opened the second half on a 12-0 run, including 10 points from C. Kookesh, before Skagway eighth grader Lennon Jennings hit from past the three-point line to trail 20-11.

Angoon’s Fayer hit from past the arc for a 23-11 Eagles lead but Skagway’s Smith hit her second shot past the arc to trail 23-14.

C. Kookesh continued to sizzle with a shot past the arc for Angoon’s final points in the stanza and Skagway answered with fast break layup by sophomore Ava Myers and another shot past the arc from Smith to trail 26-19 after three quarters of action.

Angoon’s Fayer opened the final stanza with a basket but Skagway’s Smith hit her fourth shot past the arc and Myers a pair of free-throw to close the deficit to four, 28-24.

C. Kookesh was fouled on a scoring shot and made the extra charity shot for a 31-24 Angoon lead.

Skagway’s Sager hit two free-throws but Angoon answered with a pair of their own from C. Kookesh and a basket by Fayer for a 35-26 lead.

Skagway’s Sager hit a shot past the arc with 59 seconds remaining to trail 35-29 but Sager would draw her fifth foul seconds later and leave the game. Jennings would find her second shot past the arc to close the Panthers to within three points, 35-32, but Angoon eighth grader Lisa Kookesh-Booth scored to give the Eagles 37 and Angoon held on for the win.

Skagway falls into an elimination game at 12:45 p.m. on Friday against the loser of today’s 10 a.m. game between #2 seed Kake and #3 seed Hoonah. 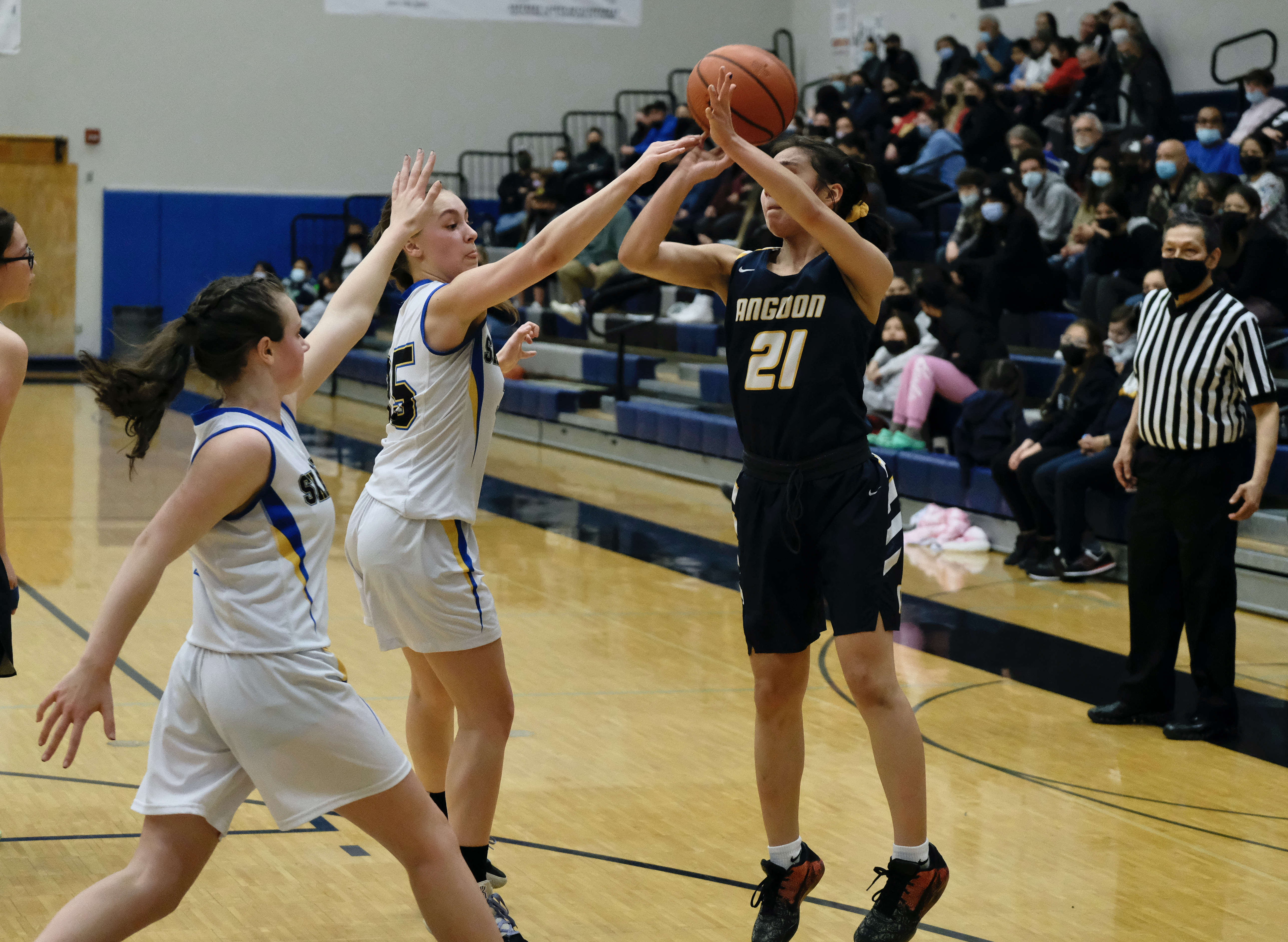 Above - Skagway senior Tatum Sager (35) checks a shot by Angoon junior Cheyenne Kookesh (21) during the Panthers 37-32 loss to the Braves, Wednesday, in the Region V tournament at TMHS. (Klas Stolpe / KINY) 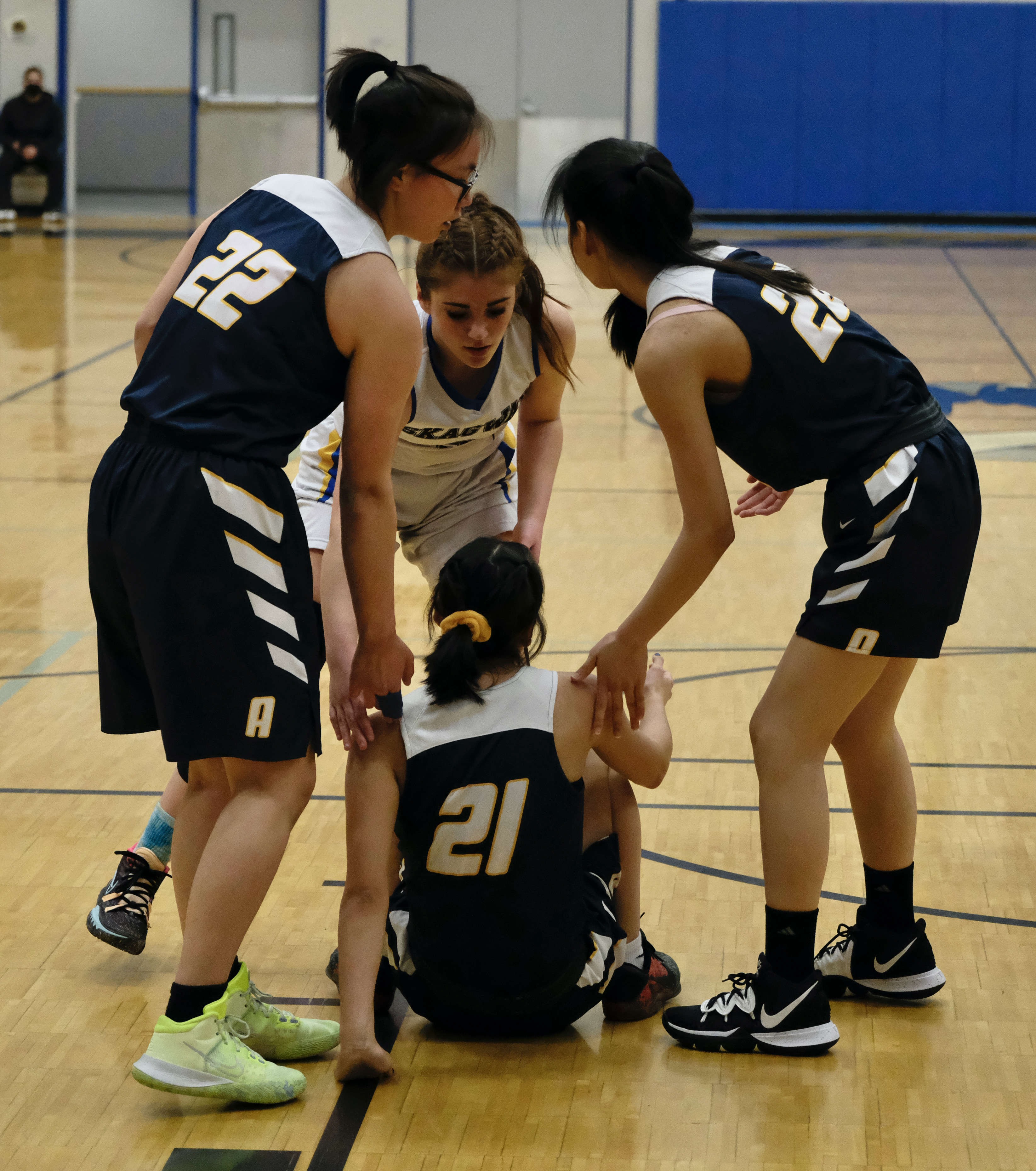 Above - Skagway Panther sophomore Ava Myers and Angoon freshman Tatum Johnson (22) and junior Briana Johnson (20) help Angoon junior Cheyenne Kookesh (21) up from the court during the Panthers 37-32 loss to the Braves, Wednesday, in the Region V tournament at TMHS. (Klas Stolpe / KINY)