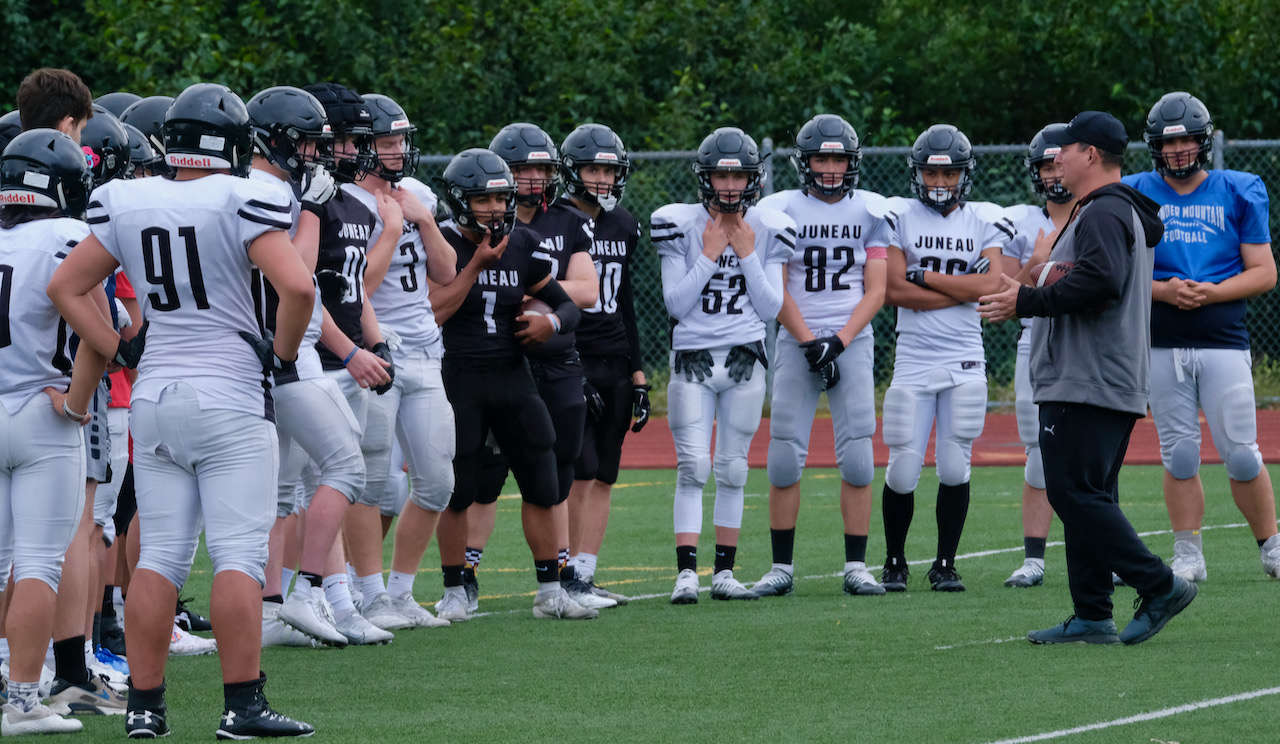 Juneau, Alaska (KINY) - The Juneau Huskies, East Anchorage Thunderbirds and Colony Knights all opened the prep season last weekend with wins and sit atop the Alaska Sports Broadcasting Network Poll in Division I.

“The first game, kids not only get the rust off but I think coaches do, too, as far as just your vision and what you are catching in the heat of the action,” Juneau head coach Rich Sjoroos said. “That is why teams make such an adjustment from week one to week two. You’ve got that four quarters of film to look at and break down and see where you’re good and where you need to work and we definitely saw a lot of good things…”

Game film showed how important the five Huskies’ rushing touchdowns against Dimond were.

“Going through the season, you know we have kind of preached that we are going to need to be able to run the football and we have got to be able to stop the other team’s running game. You look back at the state finals last year and East virtually abandoned their passing game and just really pounded the football in that championship game and did a nice job of keeping our run game in control the best anybody had done all year. You get into those late weeks in October and I think that is a pretty good formula… pretty happy with the first week. The run game was pretty solid…”

According to Sjoroos, game film showed high-quality performances on the offensive and defensive line by seniors Brandon Campbell, Sage Richards and first time center Marcus Underwood, among others.

Sjoroos noted that game film revealed high-quality defensive play by the Huskies, including something he has never seen before in an effort by Dimond to slow down senior linebacker Sam Sika.

“Sika in the middle just was a force,” Sjoroos said. “There is one play where he is being quadruple-teamed. I didn’t believe it when I heard it but when I saw it with my own eyes I was like, ‘Wow, there are four Dimond linemen blocking him,’ and that freed up a lot of other guys to make the plays… I don’t think I have ever seen that. I’ve seen double teams and maybe even a triple team, but to see four linemen… when that happens, with the speed of our defense, they were flying around and making a lot of plays…”

Sjoroos noted that senior Lucas White led the team in tackles and the secondary of seniors Jarrell Williams and sophomore Jayden Johnson came up on screens and got off blocks quickly, limiting Dimond’s ability to get their offense going.

“Tackling was really solid for the first game,” Sjoroos said. “I thought it was just a good group effort all the way around… Lucas White led the team in tackles. Jamal Johnson was in on a lot and Brandon Campbell was in on a lot… that whole defensive line…”

Passing: Jarrell Williams was 11-16 for 148 yards and one interception.

Passing: 7-16 for 70 yards and three interceptions.

“We still put the ball up 16 times,” Sjoroos said. “That is pretty much on par with what we did a year ago. I kind of went in thinking we would be much more run-heavy but Jarrell (Williams) does a good job of keeping his eyes up down field and we’ve got some kids with good hands that can run some good routes so we probably went to the air more than I would have anticipated for the first game…”

Juneau is on every team’s radar this season after pushing East in the state championship game.

“Last year we were kind of the hunters,” Sjoroos said. “And now we are the hunted. If I had to choose obviously I would take that role any time… Each week comes with a new challenge, and you are going to get every team’s best effort and I think maybe even their practices are more spirited knowing that they are going up against Juneau and that’s a credit to these kids over the last several years that have gotten the program back on track and definitely in the upper-tier teams…”

A national poll of sportswriters posted their top 25 Alaska football schools after week one as: