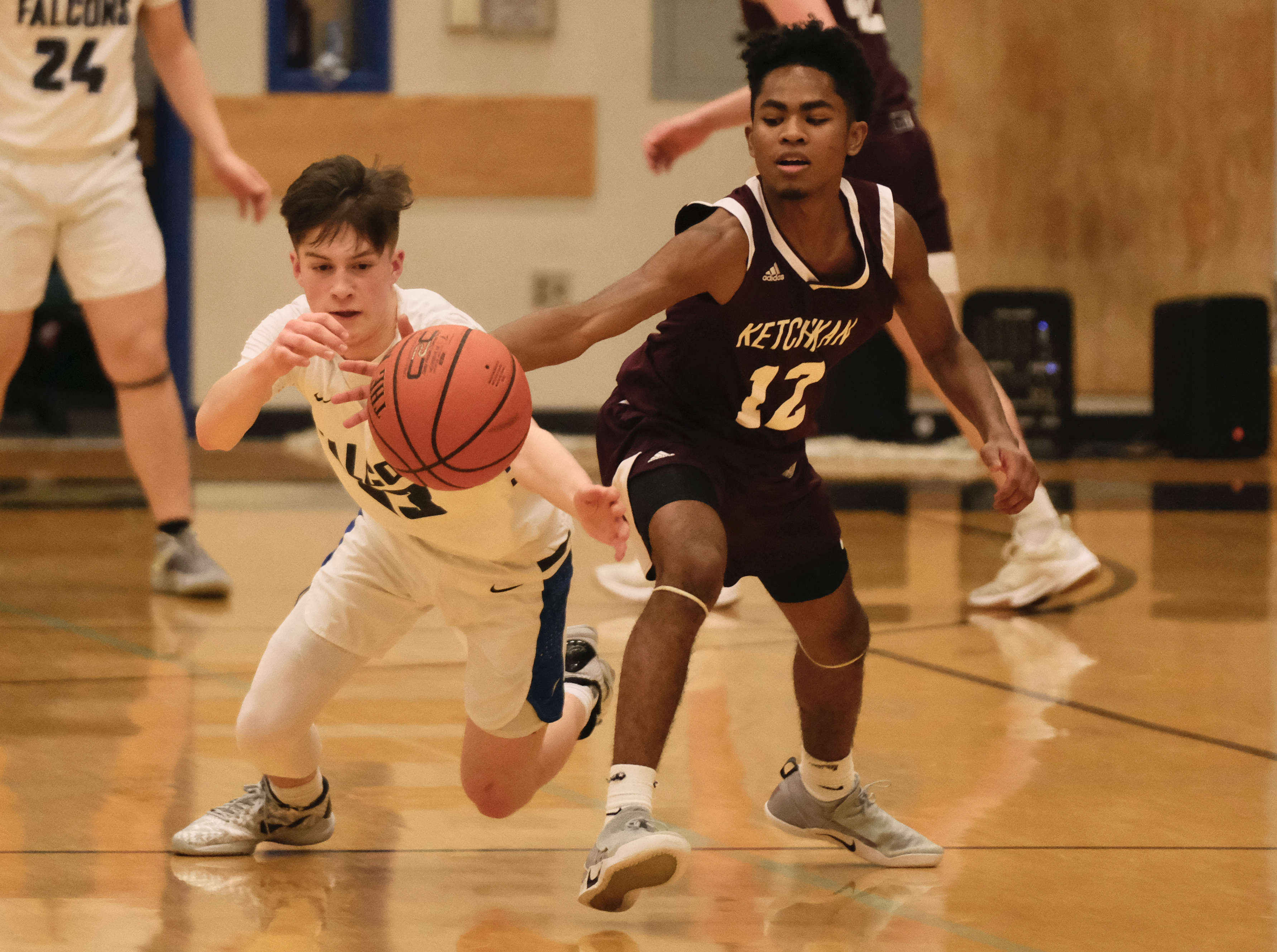 Thunder Mountain High School sophomore Samuel Lockhart attempts to steal the ball from Ketchikan High School junior JJ Parker during the Falcons 55-41 win over the Kings on Saturday in the Thunderdome. (Klas Stolpe)

Juneau, Alaska (KINY) - The Thunder Mountain High School boys basketball team rode on the shoulders, and 31 points, of sophomore Thomas Baxter as they toppled visiting Ketchikan 55-41 on Saturday in the Thunderdome. The Falcons had lost 46-41 to the Kings on Friday and 53-43 to South Anchorage on Thursday.

“I’m really glad we were able to get one,” Thunder Mountain coach John Blasco said. “Playing two tough teams, obviously, in South and Ketchikan. And Ketchikan has gotten the better of us this season in conference play so to be able to come away with one is definitely great for the kids.”

TMHS sophomore Samuel Lockhart had the first Falcon basket against Ketchikan on Saturday, sandwiched between two scores by Ketchikan junior JJ Parker, and then Baxter closed out the stanza for the Falcons with a free-throw, an old fashioned three-point-play, and a deep shot past the arc for a 9-4 lead.

Falcons sophomore James Polasky would answer two baskets by the Kings Parker to stay within five points, 20-15, with just over a minute left in the stanza.

Baxter would close out the quarter with a driving basket to match Ketchikan’s Dundas and then a deep three past the arc to close the gap to two points, 22-20, at the half.

TMHS responded with an 11-2 run that included free-throws by Baxter, a deep three by sophomore Samuel Lockhart, two more Baxter free-throws and a buzzer beating shot past the arc by Lockhart that closed the Falcons to within one point, 37-36. Lockhart stole the ball with 16 seconds left in the stanza and Baxter scored for a 38-37 lead with eight minutes of action remaining.

“We didn’t fold, we battled back,” Blasco said. “We were able to make some key stops to turn into good offensive possessions.”

TMHS would outscore Ketchikan 17-4 in the fourth quarter.

“Thomas (Baxter) is obviously a play maker for us,” Blasco said. “Really wanted him just to have fun and play loose because Ketchikan has excellent game plans defensively and they threw multiple different guys at him… they execute different defensive strategies depending on what he does.”

Key to that run were two opening drives by Falcons junior MJ Tupou who drew the defense out and passed to Adams for two scores.

“Depending on the situation in the game it is MJ (Tupou) or James (Polasky),” Blasco said. “he was definitely a spark. He stepped up in that fourth quarter with some aggressive drives and when they collapsed on him he was able to find Wallac (Adams) with a nice assist under the basket. Definitely kept our energy up. When you are finding guys that aren’t Thomas and Sam to score that just helps build the team.”

“Every game matters in terms of trying to close out the season and determine what seed we are going to be,” Blasco said. “Ketchikan has gotten the better of us for the better part of two years now. Definitely happy for the guys to be able to pull one out. We will have to be ready for them when we get down to regions.” 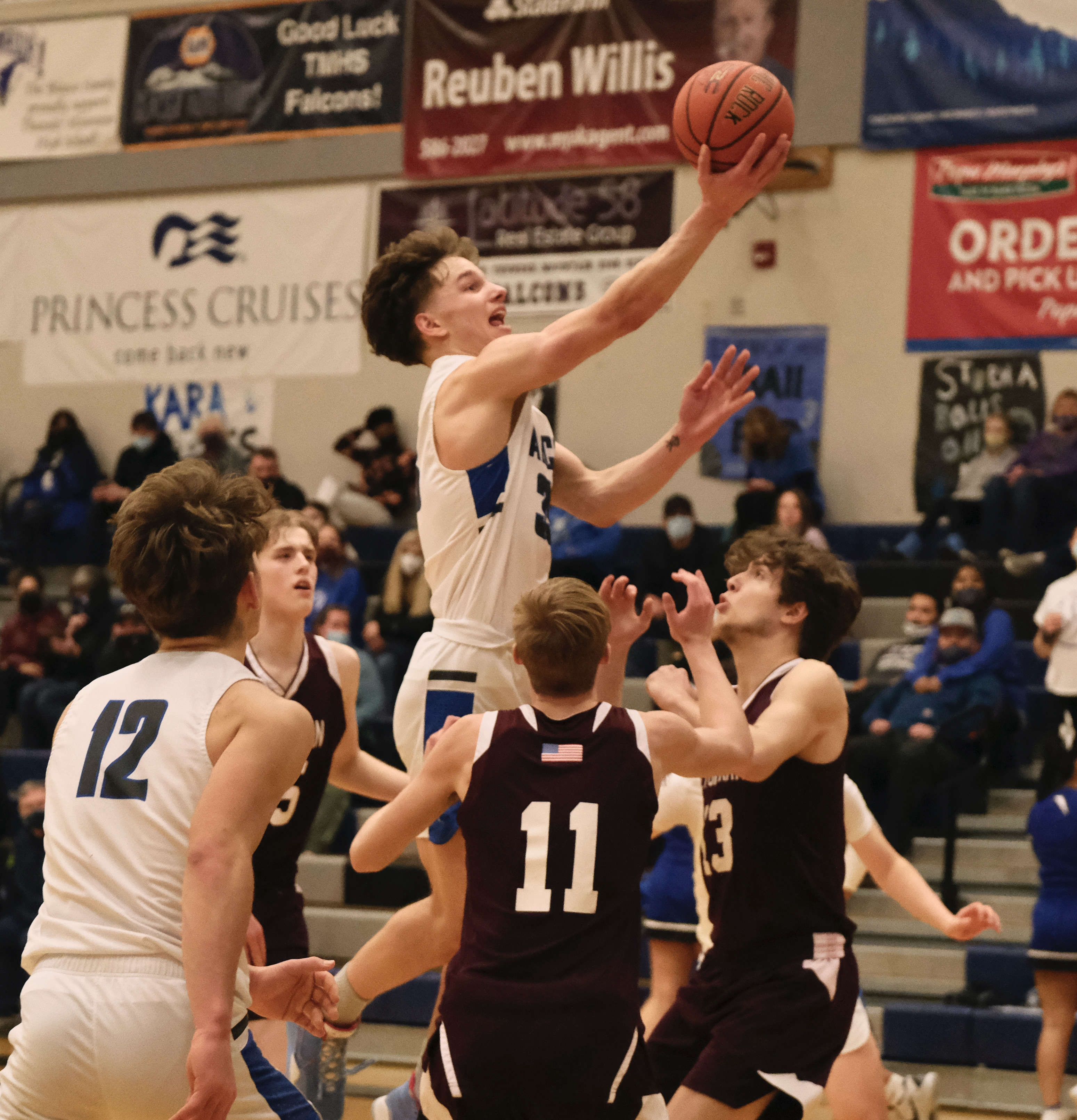