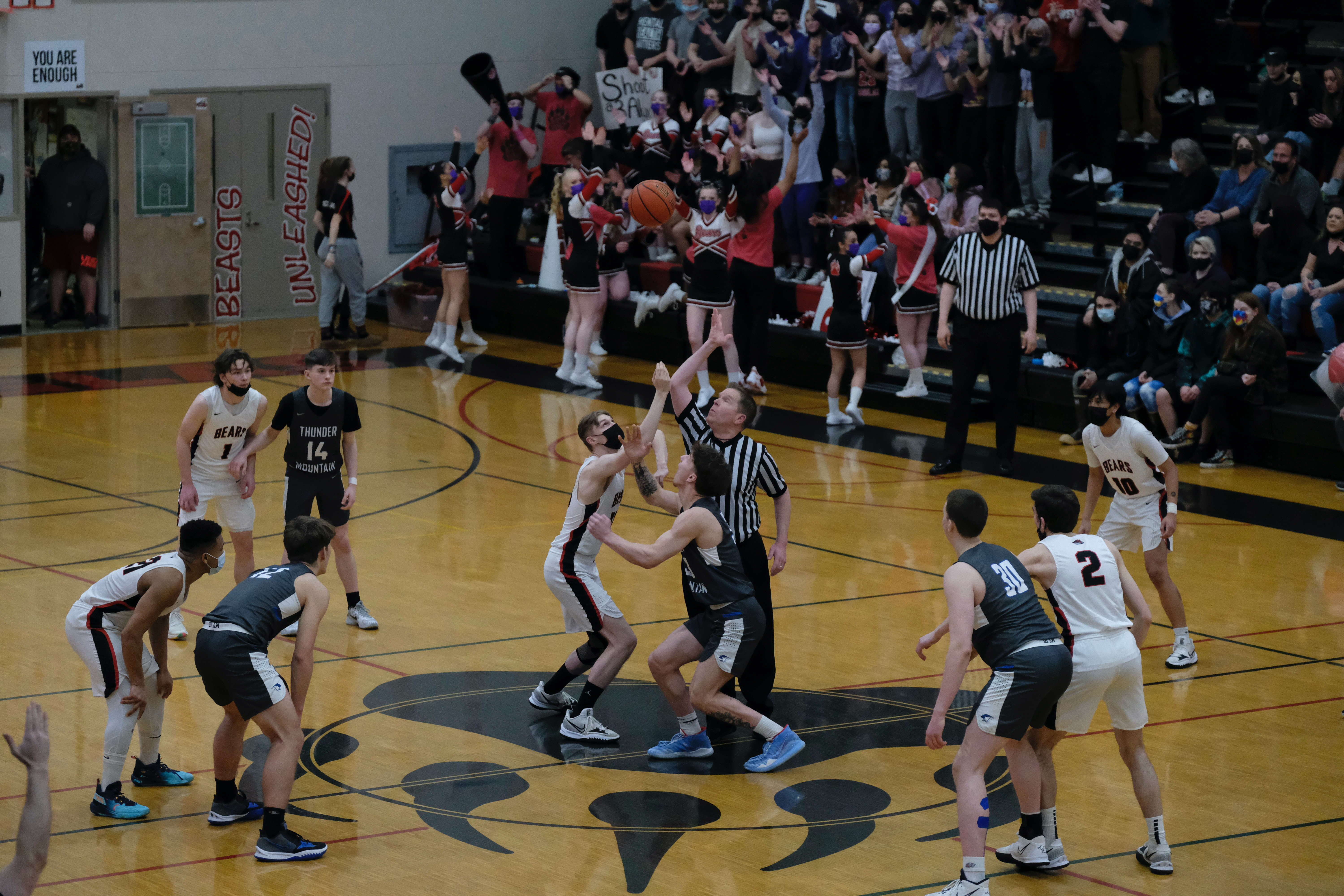 Fans packed the gymnasium for the evening, which started with the girls game and later included senior festivities for both basketball teams, cheerleaders and the dance team, and a special program concerning suicide awareness and prevention.

“The guys are playing with a little extra motivation for a lot of different reasons,” Juneau-Douglas coach Robert Casperson said. “All that gets built into the game. A great crowd. They feed on the excitement of the crowd and it was an electric atmosphere. It was a great atmosphere.”

“That was an incredible environment tonight,” Thunder Mountain coach John Blasco said. “Not just their senior night but the entire stands full. You couldn’t have asked for a better environment to end the regular season on.”

Falcons sophomore Thomas Baxter hit the opening shot of the game past the arc.

Baxter answered for the Falcons, again past the arc, for a 6-5 TMHS lead.

JDHS got their final lead of the game as junior Orion Dybdahl put a rebound back in for a 9-8 lead.

Baxter hit in close with 1:38 remaining in the quarter, and sophomore Samuel Lockhart hit back-to-back buckets for a 14-9 lead after eight minutes of action.

JDHS opened the second quarter with a press, forcing a turnover that Dybdahl put in off the glass to pull within 14-11.

TMHS answered with a Lockhart shot past the arc.

JDHS sophomore Sean Oliver was fouled and hit two free throws to close to 17-13 but Baxter hit an old fashioned three-point play for a 20-13 TMHS lead and after JDHS’ Nelson hit a turn-around jumper, Baxter countered again with a deep shot past the arc for a 23-15 Falcons lead.

JDHS’ Nelson scored to end the Crimson Bears first half and TMHS’ Lockhart finished off the Falcons’ first half scoring and a 25-17 lead.

“Tonight was an incredibly physical game,” Blasco said. “JD played some really tough defense on us that disrupted our flow there in the second quarter and the third. But the guys just kept battling and playing hard and we knocked down some key shots and got some good opportunities on some penetration.”

Baxter opened the third quarter with his fourth shot past the arc for a 28-17 lead but the Crimson Bears stormed back with baskets by sophomore Sean Oliver, junior Kai Hargrave, and Dybdahl, who hit two in a row to close to three, 28-25.

Dybdahl was fouled on a scoring shot and hit the extra free throw for the Crimson Bears for 32-28 but the Falcons Lockhart hit his second shot past the arc and Adams made two free-throws for a 37-28 advantage.

JDHS junior Chris Harris hit a free throw and Carrillo a shot past the arc to trail 37-32 but TMHS’ Baxter crossed his defender a step into the key and stepped back outside the arc to drain his fifth three-point shot for a Falcons’ 40-32 advantage after three quarters.

“They got that lead down to three or four at one point but we got a couple big shots that got it back up to nine-ten,” Blasco said. “And thankfully we were able to hold onto it for the rest of the game. I am pleased with my guys’ efforts and sticking together through the physicality and environment.”

TMHS’ Baxter was swarmed to open the fourth quarter and forced to give up the ball with JDHS’ Harris hitting a basket to trail 40-34.

Adams responded for the Falcons with a hard drive and Baxter was fouled on a shot, hitting both free throws for a 44-34 lead.

Lockhart was fouled on the next possession and hit one of two from the line and junior MJ Tupou hit from past the corner arc for a 48-34 Falcons advantage.

TMHS hit 10-14 at the charity stripe in the final stanza, countering each JDHS basket and the Crimson Bears press, to hold onto the lead.

“We play hard, that’s for sure,” Casperson said. “I love that about our guys because we are playing extremely hard. And I know the ball is going to bounce our way sooner or later. Some shots are rolling around the rim and coming off. These guys work so hard they deserve to see some of those drop through. I think the game changes a little bit if we make some of those shots. We’re a very balanced team in that respect. We can get a lot of different guys to get buckets for us. Everybody is working extremely hard on the defensive end, we rebound, there is a lot of great fundamental play that’s going on out there. But at the end of the game you have to score more points than the other team, and right now we’re not scoring.”

JDHS held an 11-10 lead after eight minutes on Friday. Carrillo scored 11 of his team-high 13 points, and all of the Crimson Bears points, in the stanza.

Baxter scored 13 points in the second quarter for the Falcons and Adams added six and Lockhart two as TMHS took a 31-18 lead at the break and were never threatened in the second half. TMHS led 49-29 after three quarters.

The two TMHS wins and JDHS losses puts the Southeast Conference final records at 4-4, including the Ketchikan Kings, for seeding in the Region V Tournament starting Wednesday at Ketchikan.

The three-way tie is broken by a point differential in conference games that gives the Crimson Bears the top seed, the Falcons number two and the Kings third.

“Thunder Mountain is playing great right now,” Casperson said. “They’ve absolutely improved and they are shooting the ball really, really well, especially Thomas (Baxter). We are going to have to defend better and we’re going to have to find ways to get higher percentage shots into regions.” 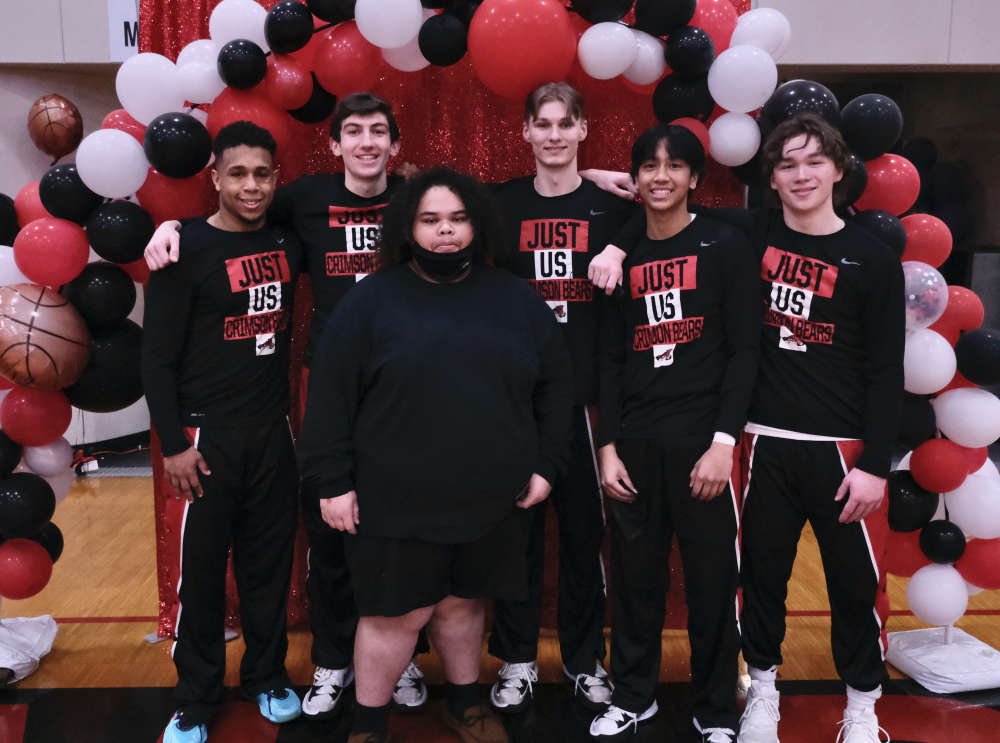