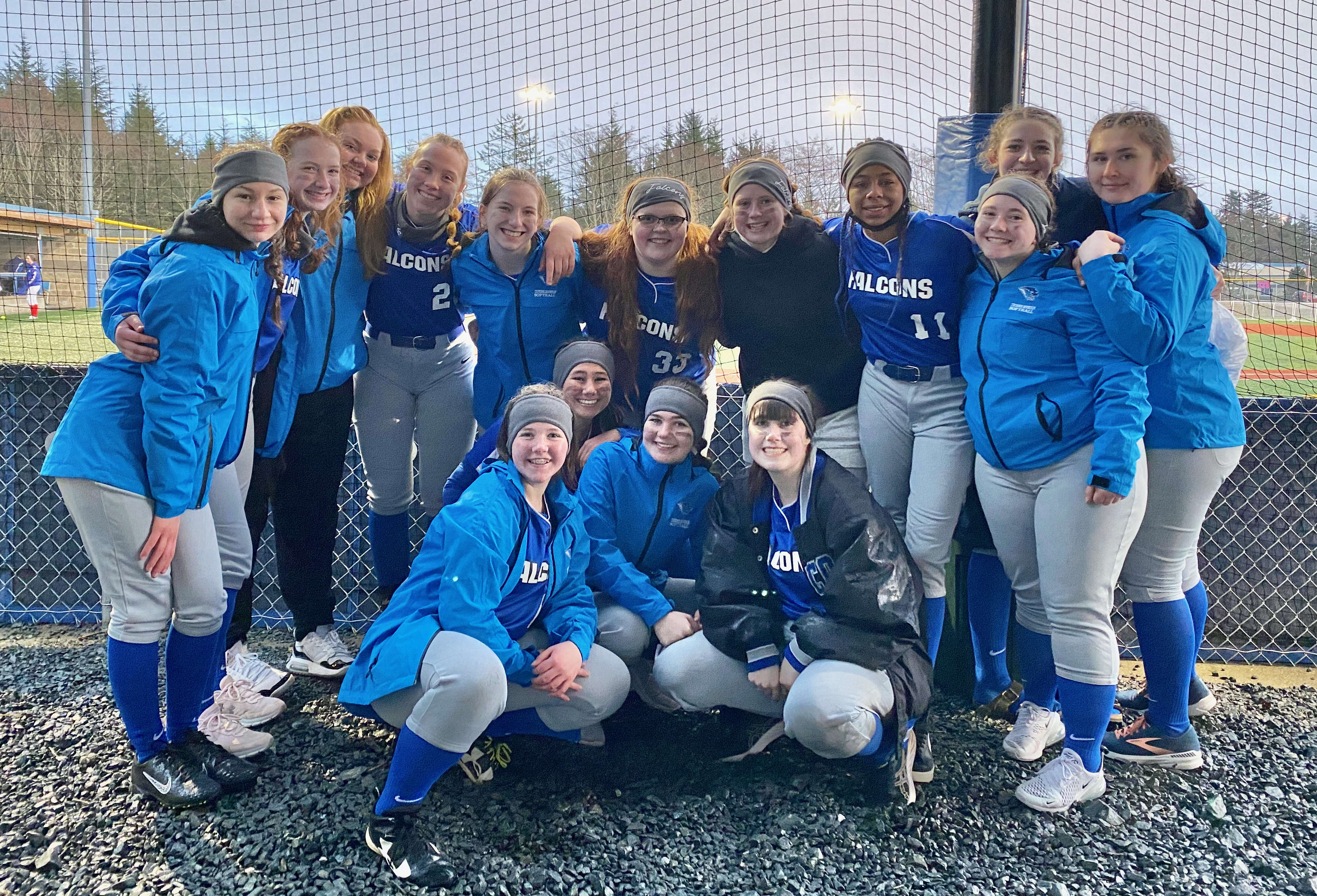 On Thursday the Falcons lost to Sitka 8-6, and defeated Palmer 17-3 and Juneau-Douglas 7-2.

“I am proud of my team and how they came together,” Harp said. “It was our first time playing with each other in a long time but I think we came together great. I would just have to say all the girls did pretty fantastic fielding wise and our pitchers came through even though it was hailing and raining… I’m very happy with how we did but I know we can do better.”

“The leadership that Sidney Strong and Riley Harp brought to the weekend really set the tone for the expectation for everyone’s behavior and play,” Coach Strong said. “They really elevated everyone else around them.”

“I was happy with the enthusiasm of the girls,” Coach Strong said. “Everyone stayed real positive even when we had some trying moments. They really came together as a team which is always lovely to see. Riley Harp got us started with a super awesome hit that kind of got everyone pumped. Softball to me is, like, when one kid starts to hit then the hits just seem to start coming. Then once we got that one done and everyone realized they could hit the ball we started getting some hits.”

Against Palmer on Thursday, Payne pitched and held Palmer to just four hits. Hetle earned her first high school hit with a hard shot to right field and S. Strong put a home run over the Moller Field fence in the top of the third inning.

Against JDHS on Thursday, Harp earned the win in the circle and S. Strong had three hits, Lovejoy, Harp, Johnson, and Dobson two hits and Gates one hit.

On Friday the Falcons lost to Chugiak 6-2 and to Palmer 7-3.

Against Chugiak, Johnson had a two RBI hit, and Harp and Gates also found base space.

Against Palmer, Lovejoy worked the circle, Rentrop had two hits and two stolen bases, and See, Gates and K. Strong had one hit each.

Pool play games continued into Saturday and the Falcons lost to Palmer 13-6.

Against Palmer, Gates relieved in the second inning and allowed just three more runs in the game and Rentrop had three stolen bases. Gehring singled on a hard ground ball in the bottom of the second to get the Falcons hitters going.

The Falcons win over Sitka put the Wolves out of the tournament. Harp was in the circle and allowed just one run. Johnson made a home run-saving catch at the fence and K. Strong made two masterful backhanded catches on hard hit ground balls down the first base line.

In their tournament ending loss to Chugiak, Lovejoy held the Mustangs to just six hits.

Coach Strong said Lovejoy was locked in against and the Division I Mustangs struggled to get a hold of the ball. Harp and Lovejoy were responsible for the Falcons two hits in the game.

“I was really happy to watch this team come together,” Coach Strong said. “When you practice so much I think that sometimes you miss the transition to the actual game scenario. We practice game scenarios but it doesn’t always translate clearly. I think it is going to be a really fun season.”