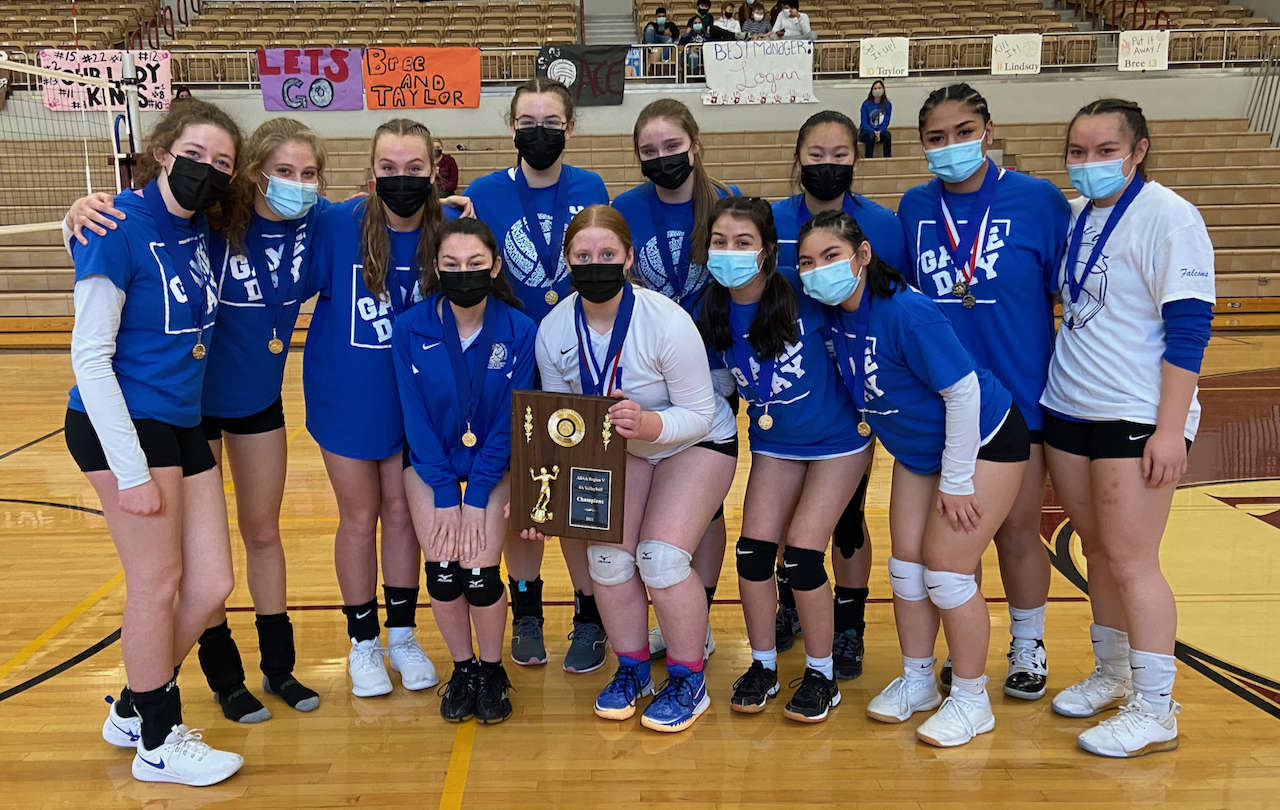 The Thunder Mountain Falcons volleyball team won the Region V Championship on Saturday at Ketchikan and will travel to the state championships in Anchorage this week.

Juneau, Alaska (KINY) - The Thunder Mountain High School volleyball team did not drop a set in their march through the Region V Championships at Ketchikan over the weekend that culminated with the Falcons defeating the Juneau-Douglas Yadaa.at Kalé Crimson Bears for the title.

“We are very proud,” TMHS coach Julie Herman said. “And the girls are really excited.”

“We put ourselves into game-point scenarios for serving, for passing, for hitting and I used a whistle and really tried to make it game-like,” she said. “So that when they got under the pressure situation they were able to perform and feel confident in their skills.”

The Falcons were the top seed in the tournament and had a first round bye.

Juneau-Douglas opened the tournament on Friday afternoon against the host Ketchikan Lady Kings. The Crimson Bears won in five sets by game scores of 25-23, 17-25, 28-26, 21-25 and 15-12. The win put JDHS into a Friday night semifinal against the Falcons.

“It seemed like we had a hard time kind of gelling against Ketchikan,” Juneau-Douglas coach Jody Levernier said. “And we kind of went into the Thunder Mountain game the same way. We just weren’t vibing with each other.”

Thunder Mountain won the semifinal in three sets by scores of 25-13, 26-24 and 25-16, putting the Falcons into the Saturday afternoon championship match and the Crimson Bears into a Saturday morning elimination game against Ketchikan.

“Our girls were just excited and pumped to play,” Falcons coach Herman said. “They were focused. We were at the right place at the right time and a lot of really nice attacks happened, really nice serve receives so we could run the offense. I was particularly pleased with Moana (Tuvaifale) being able to just set the offense that we needed to disrupt the other team and it was a great game.”

“We had some conversations the night before the Ketchikan match,” Crimson Bears coach Levernier said. “The girls responded well and came out and our goal was just whatever the result of the tournament was, you know, of course, we wanted to win, but we just wanted to play well and be proud of ourselves. And I think they did that. They played really hard. We dug balls and kept balls in play that they would not have earlier in the season.”

The Crimson Bears gave their capital city neighbor Falcons a tighter match the second go-around but Thunder Mountain won in three sets again by scores of 25-21, 25-22 and 25-23.

“Before the match we talked about being 75 points away from winning Region V and just focusing on each and every point,” Herman said. “And if we ended up losing a set then we play for a 100 points. We knew that was what we needed to do one point at a time playing the marathon of a three-out-of-five set game.”

Levernier said, “It didn’t seem like we played just three sets, we really battled. It’s a mixed emotion. We lost but I am really proud of them.”

Herman said, “It was just a great weekend of volleyball. Juneau-Douglas played really well, lots of press, and our girls just responded. Getting down a couple points in volleyball you can’t worry. You have got to just keep going, keep playing, keep competing. And even if we were down, by four I think once or twice, we just said, ‘Alright, let’s go, let’s focus, let’s rally up,' and we kept pressing and ended up on top and I’m very pleased with the results.”

Herman said the tournament was incredible.

“It was an intense experience to watch Ketchikan battle with Juneau,” she said. “Both teams just should be really proud of the way they played. It was really fun to sit in the stands and just watch great volleyball happen.”

Brocious led with 42 assists, Tuvaifale 39 and Gates one.

Strong had 27 points won on her service, Toutaiolepo 14, Gates and Tuvaifale 11 apiece, Welling 10 and Brocious eight.

Sanford had 10 aces, Newman five, Adams, Bruno and Chloe Casperson two each, and Carlynn Casperson one.

“It was really hard on them because, of course, I know they wished they had one more weekend,” Levernier said. “But I think they walked away also feeling like they played as hard as they can play and they gave everything they had and they didn’t leave anything left. I don’t know what else you can do besides that.”

During the skills competitions Friday, the Crimson Bears’ Adams won the passing contest and Newman won the serving contest.

“Playing volleyball is fun and winning is fun and I love the competition,” Levernier said. “But those girls that we get to hang out with… they are amazing kids. We spend more time with them than we do our own families at this point and I’m just really happy that they are all great kids… it makes it fun.”

The Thunder Mountain Falcons will play in the state championships at Anchorage’s Alaska Airlines Center.

The losers of all Thursday matches fall into elimination games Friday and play to reach a Saturday noon contest against the Friday night semifinal loser to earn a spot in the final. 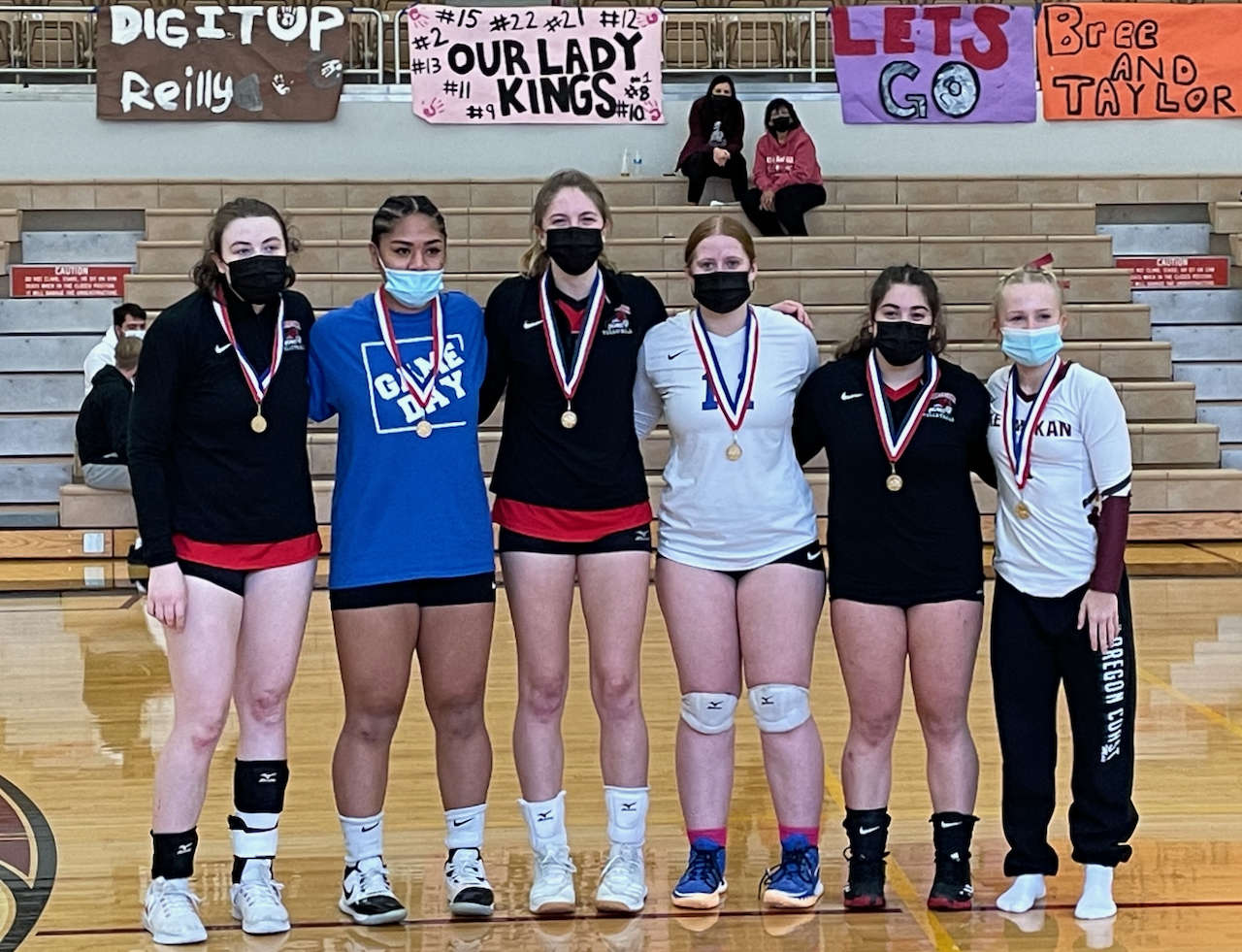 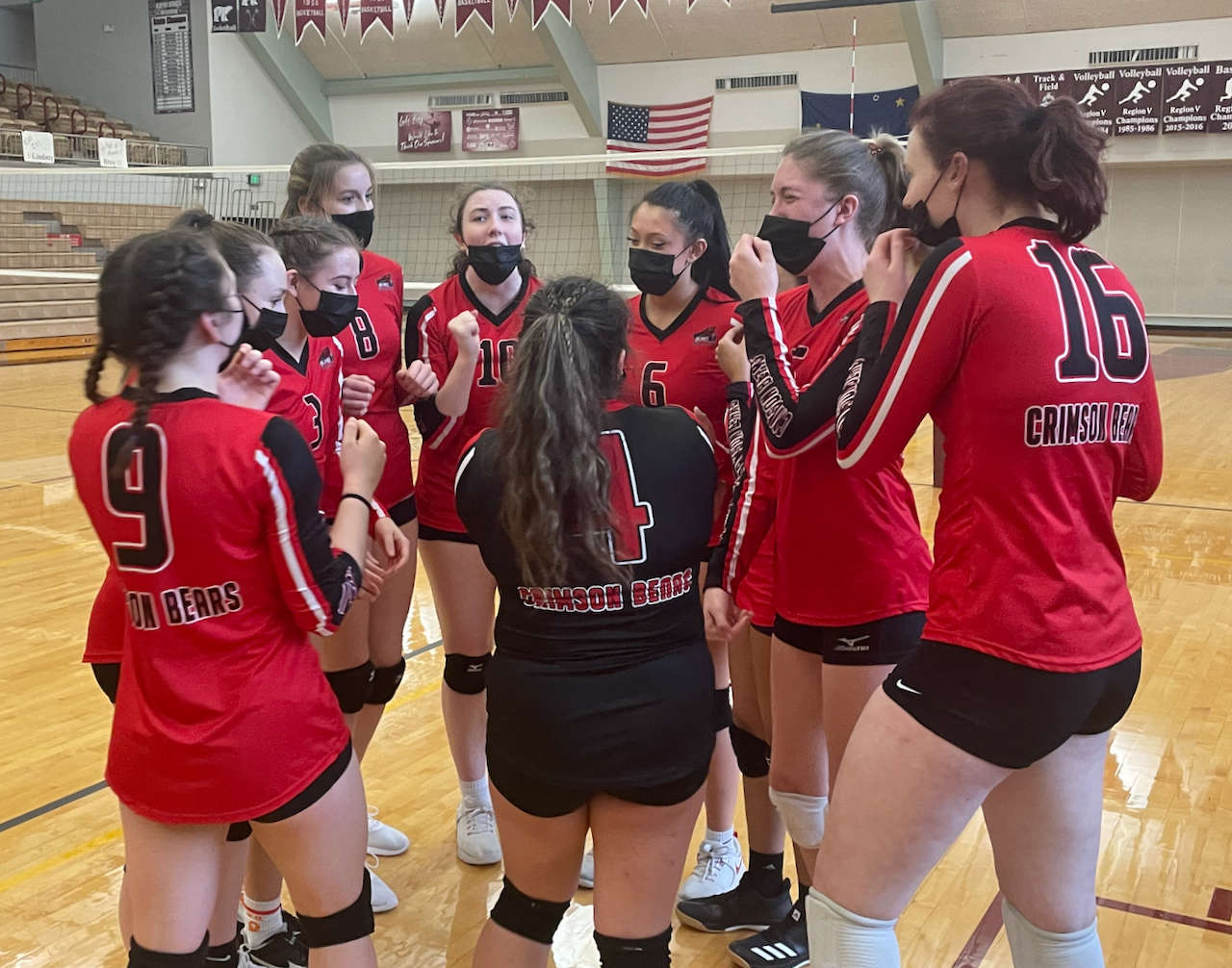 Above - Members of the Juneau-Douglas volleyball team are shown at the Region V tournament in Ketchikan on Saturday. The Crimson Bears were runner-up to Thunder Mountain, Kayhi placed third.