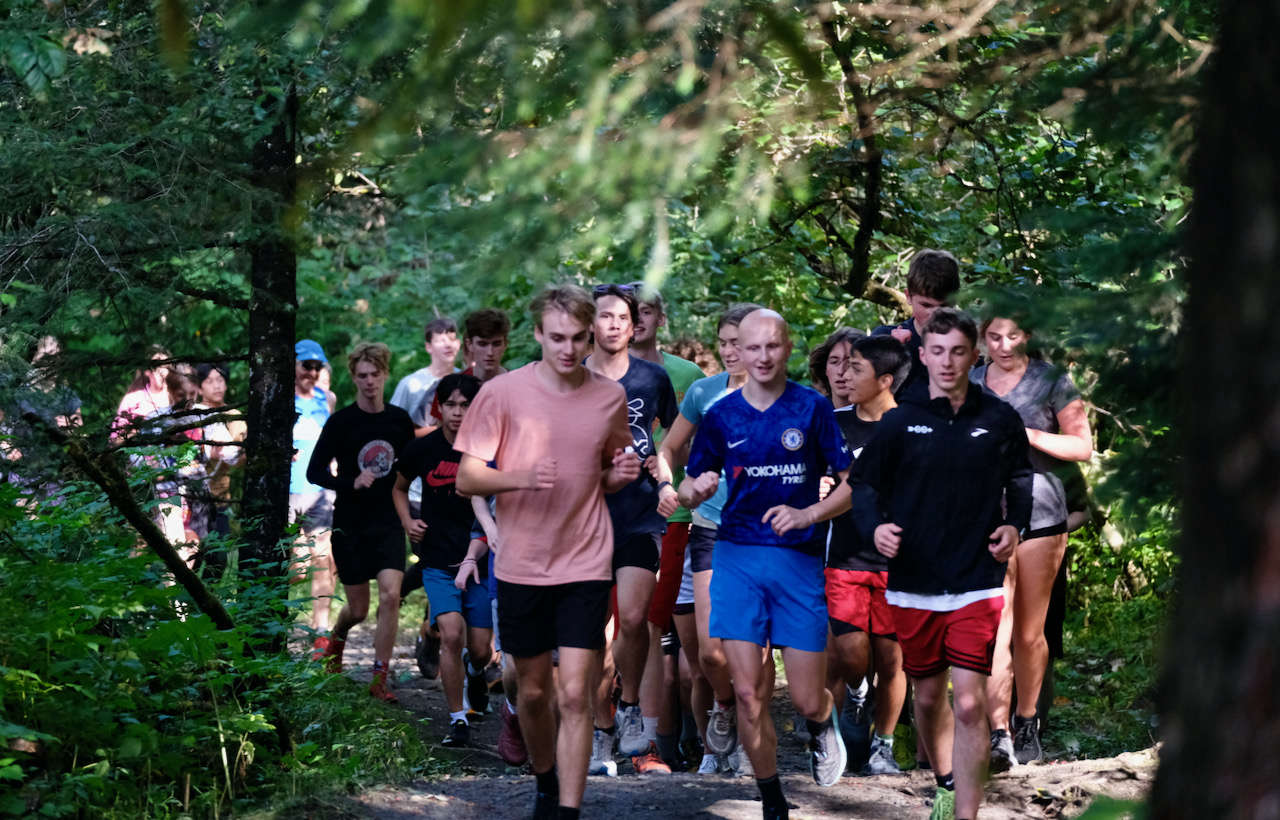 Juneau, Alaska (KINY) - With the first prep cross-country race of the season set to begin at 10:30 a.m. Saturday along the Treadwell Mine Ruins Trail in Douglas, the Juneau-Douglas High School: Yadaa.at Kalé Crimson Bears and Thunder Mountain High School Falcons are ready to welcome schools from Haines and Petersburg in the Sayeik Invitational.

“We have a season of surprises and that has impressed all of our coaching staff, which is Tristan (Knutson-Lombardo) and about 10 others,” JDHS co-coach Merry Ellefson said. “We just got back from taking half the team up to the Yukon and half was here and then ended up in a time trial… I think we have a really young team and I think we are going to see a lot of shifting and changing and excitement in that. We also have a lot of experienced veterans, both on the girls’ and the boys’ side, but what we do know about this team is they really like to have a good time and they work really hard together. So we are looking forward to a season where we surprise them and they surprise us…”

TMHS head coach Jon Stearns said the Falcons, like the Crimson Bears, has a bevy of new recruits.

“Last year we doubled our team,” Stearns said. “And this year we have added probably about another 20 kids to the team and a lot of them are young. We have a lot of good freshmen and sophomore talent along with our seniors, who have amazing work ethic and are here to push the kids. But we have a really big young group, which is pretty exciting for the future…”

JDHS has over 70 runners this season and TMHS has roughly 60 team members.

JDHS seniors Will Robinson and Eli Crupi - 2nd and 3rd in regions last season -  and juniors Martin Holst and Edgar Vera Alvarado return from the Region V Championship boys team that captured their 32nd crown in a row and 45th of the past 48 region titles, and helped the Crimson Bears to a ninth-place team finish at state. Crupi placed 38th at state last season, Robinson 47th, Holst 58th and Vera Alvarado 66th. Sophomore Josh Reed and junior Wilder Dillingham were state alternates.

“We have a strong handful on both sides of athletes that have been pushing really hard these last year or two and they are making some moves on that top pack,” Ellefson said. “Which is really exciting for us…”

“We have a large group,” Stearns said. “And fortunately they are pretty self-motivated. It is really cool to see the people from the front runners to the people, like we have a lot of the girls basketball team that have come on the team and are using it for cross-training, and you have the people that are cross-country first and you have people that are training for other sports and everybody is all in. Everybody is giving their best effort…”

The Sayeik Invitational meet hosted by JDHS and TMHS will include teams from Petersburg and Haines. The meet will feature an open race at 9:45 a.m. for the public and for team members who do not have enough practices in to compete in the high school races. The girls high school race is at 10:30 a.m. and the boys race is at 11:00 a.m.