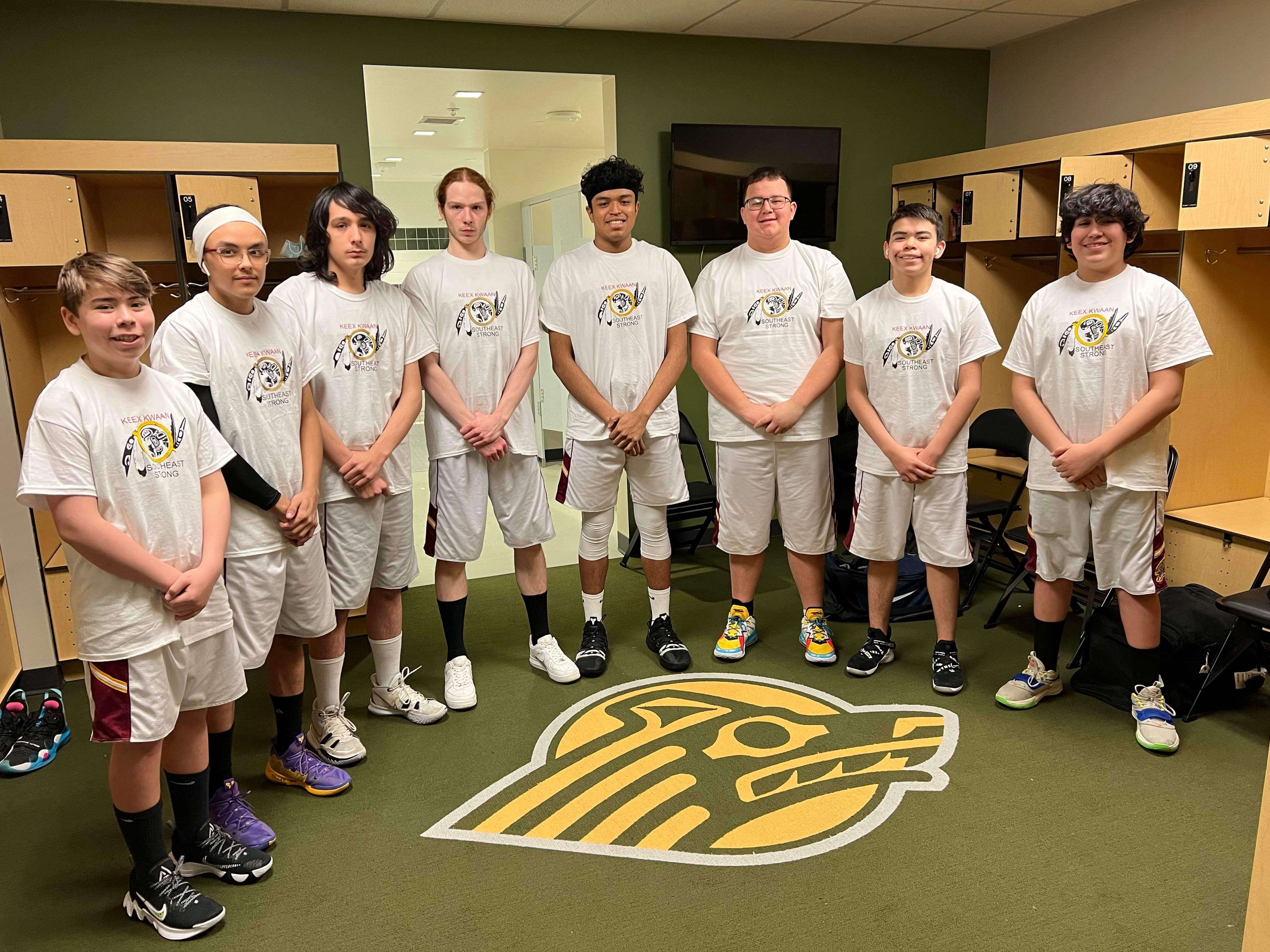 Juneau, Alaska (KINY) - The Hoonah Braves boys basketball team showed a true act of sportsmanship before their opening round game at the March Madness Alaska 2022 ASAA/First National Bank Alaska 1A/2A Basketball State Championships at Anchorage’s Alaska Airlines Center, and the impression they left will be remembered throughout the tournament.

In warmups, the Braves wore shirts honoring the Kake Thunderbirds, the top Region V 1A Championship team that could not attend the state tournament due to a COVID-19 outbreak in their community.

“The boys came up with it actually,” Hoonah coach Ben Mettling said. “No prompting from me or anybody. And that’s cool, I mean, because Kake couldn’t go, a sign of respect towards them.”

The shirts say “KEEX KWAAN,” the Tlingit name for Kake, or rather, refers to “the village of Kake” or “the people of Kake.”

The shirt also shows the merged school logos of both the Hoonah and Kake teams followed by the words “SOUTHEAST STRONG.”

“It’s great,” Mettling said. “It’s nice to be able to do that. It’s sad for Kake that they don’t get to go. I think they had a great chance this year to really go for in the state tournament. Also hoping that they can get over their cases and not have any complications with that. It was nice to see the boys show the Kake boys that…”

Hoonah qualified for the state tournament by default as Kake could not attend. Klawock was already qualified as the Region V tournament runner up. Yakutat declined the substitute invitation and Hoonah accepted as the fourth place finisher.

When Hoonah players found out last Sunday they would be going, they discussed how to honor their Southeast hoops rival, Kake.

Hoonah athletic director Jessie Martin said players and parents contacted her. Originally the thought was to wear the Kake warmup tops but logistically the time frame would not work. Hoonah had only hours to arrange tournament travel.

“A family member of one of the boys suggested we do something,” Martin said. “And the boys suggested we make shooting shirts… it was fully the boys idea and I just kind of ran with it… the boys really wanted to honor Kake knowing they had a really strong squad this year and they were disappointed their friends weren’t able to go to the state tournament as originally scheduled and they wanted to honor them by wearing those during the warmups for their game… it was just a really sweet gesture. These kids and the camaraderie that they have built across Southeast in their support of each other and other teams is just really cool to see.”

Martin, who was in Juneau on Sunday, searched through Facebook to find a printer and sent the school logos and wording to TJ’s Custom Designs in Juneau to print the idea on shirts.

“Jessie Martin sent me the logos of both the teams and I was trying to figure out what to do,” owner Tamara Jack said. “She wanted to support Kake… I sat there for an hour and ended up coming up with the design to mix them together.”

Jack, who has relatives in Kake and Hoonah and is a basketball fan, said it was special to be part of something like this.

“It made my day when she asked me to do it,” Jack said.

The rest of the state has always known of Southeast’s athleticism in sports, and this gesture has confirmed the sportsmanship Southeast teams possess.

Hoonah coach Mettling said the Braves have reflected on the bigger atmosphere of the state tournament and the opportunity to be in Anchorage, but also talked about Kake and being able to honor them in front of bigger crowds in a bigger gym.

“The boys are just relaxing right now and we’ll head to the gym in a couple of hours and give it another shot,” Mettling said Thursday. “Just being grateful for the opportunity to be here and play another game, especially on this stage… I’m very proud of our boys for what they did for the Kake boys. And they’ve been a good group of guys all season…”

Above - A close up of the shirts Hoonah is wearing to honor Kake at the ASAA March Madness Alaska Basketball State Tournament at Anchorages Alaska Airlines Center. Southeast Champion Kake was unable to attend state due to a COVID outbreak in their community and Hoonah accepted to play in their behalf. (Photo Courtesy Jessie Martin)