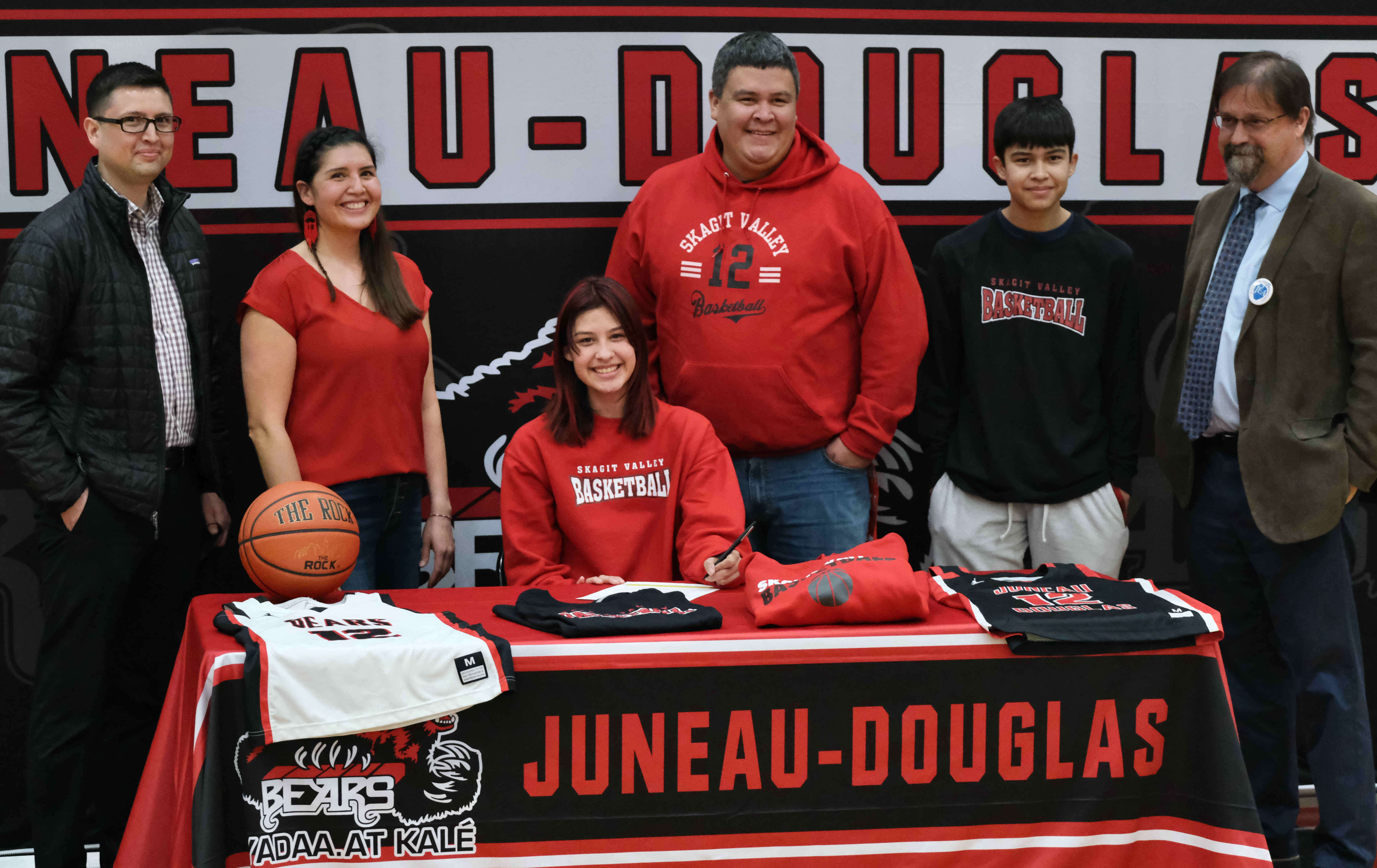 Jackson met Skagit Valley coach Deb Castle at a basketball camp last year and they stayed in touch through the summer.

“I just like her concept of basketball is family,” Jackson said. “Basketball is family and we are all tight knit. And I just like her way of coaching. She focuses a lot on full court press… I think my speed can help with more pressing and I want to improve on my press. I also really want to improve on my shooting which she said she could help me with.”

“We have recruited Trinity because of her speed, and her development over the season,” Castle said. “I met Trinity last summer at a basketball camp at Anchorage Christian High School. She impressed me with her hard work habits and maturity. I followed her during the season and could tell she had been working on her skill development. I was very happy to see her win the three-point shooting contest at the Senior Games a few weeks back. We are looking for a shooter and she may fill those needs. We look forward to working with Trinity and seeing her improve over the course of the next two years.”

Jackson will also be working toward an associates degree in sports and fitness management.

From Dzantik’i Heeni Middle School through JDHS, Jackson brought a special trait and enthusiasm to the court, something she wants to pass on to other players coming up.

“Just make sure you play hard but have fun with it,” she said. “There is no point in playing if you are not going to have fun in it… just keep going. It might get hard and might hurt but you are going to have some great results after.”

Jackson said she wanted to thank all her coaches over the years - including Nicole Fenumiai, Steve Potter and mother Jasmine James - her father Brandon Jackson, teachers, friends and everyone who played with and against her.

“And just everyone that has helped me get here,” she said. “I definitely could not have done this by myself.”

Jackson averaged 10.3 points per game this season, 6.2 rebounds per game, 2.2 assists per game and 4.4 steals per game. She shot 61.6 percent from the free throw line.

Mother Jasmine James, a basketball player of Yakutat fame and the Juneau Lions Club Gold Medal Tournament, was an assistant coach for the JDHS team her daughter played on.

“It’s super exciting to see that she has the opportunity for further growth at the next level after high school,” James said. “It was a lot of fun to coach her, but it was also difficult to stay in that, like, coaching mode and not mom mode, especially in a couple communities that we played in. But it was also really exciting to see that side and to really have deeper conversations about basketball and about thinking the game as well as playing the game. So it just really opened up those conversations with her.”

James said she will remember her daughter as a great person and a great player, but also noted a particular memory from Jackson’s years on the JDHS court.

“So rolling through photos of her… I think right here,” James said and pointed to a painted line on the court. “She, like, tripped over a line, maybe her freshman year or sophomore year during a Capital City Classic. So that stuck with her for a while…”

Father Brandon Jackson, a Kake basketball alum and Lions Club Gold Medal player, said there were a lot of good basketball memories about his daughter.

“From first picking up the ball to realizing her potential,” Brandon Jackson said. “It’s a beautiful thing to watch, it’s a beautiful thing to see. She has excelled quite well. To say I am proud is an understatement. She is going to go farther in basketball than I did and any parent wants that for their child… to go farther and do better, to meet goals that you couldn’t or didn’t. So I am excited, very excited.”

“She played really hard all the time,” Potter said. “And expected other people to play that way also… she is going to play really hard… she is a dynamic athlete and her shooting has steadily improved over the course of her high school career.”

Jackson won the three-point contest at a recent senior all-star tournament in Anchorage.

“And she let me know she also beat the boys champion in the run-off afterwards,” Potter said. “She is just a hard match-up. She definitely has the height to play guard but she also has the athleticism to play small forward also and I think she will do well.”

Jackson said all her memories of playing basketball stick out.

“Honestly just playing,” she said. “It is hard to just pick one memory… wait, a memory of me shooting from, like, almost at half court on a banked three with three seconds left at the half this year.” 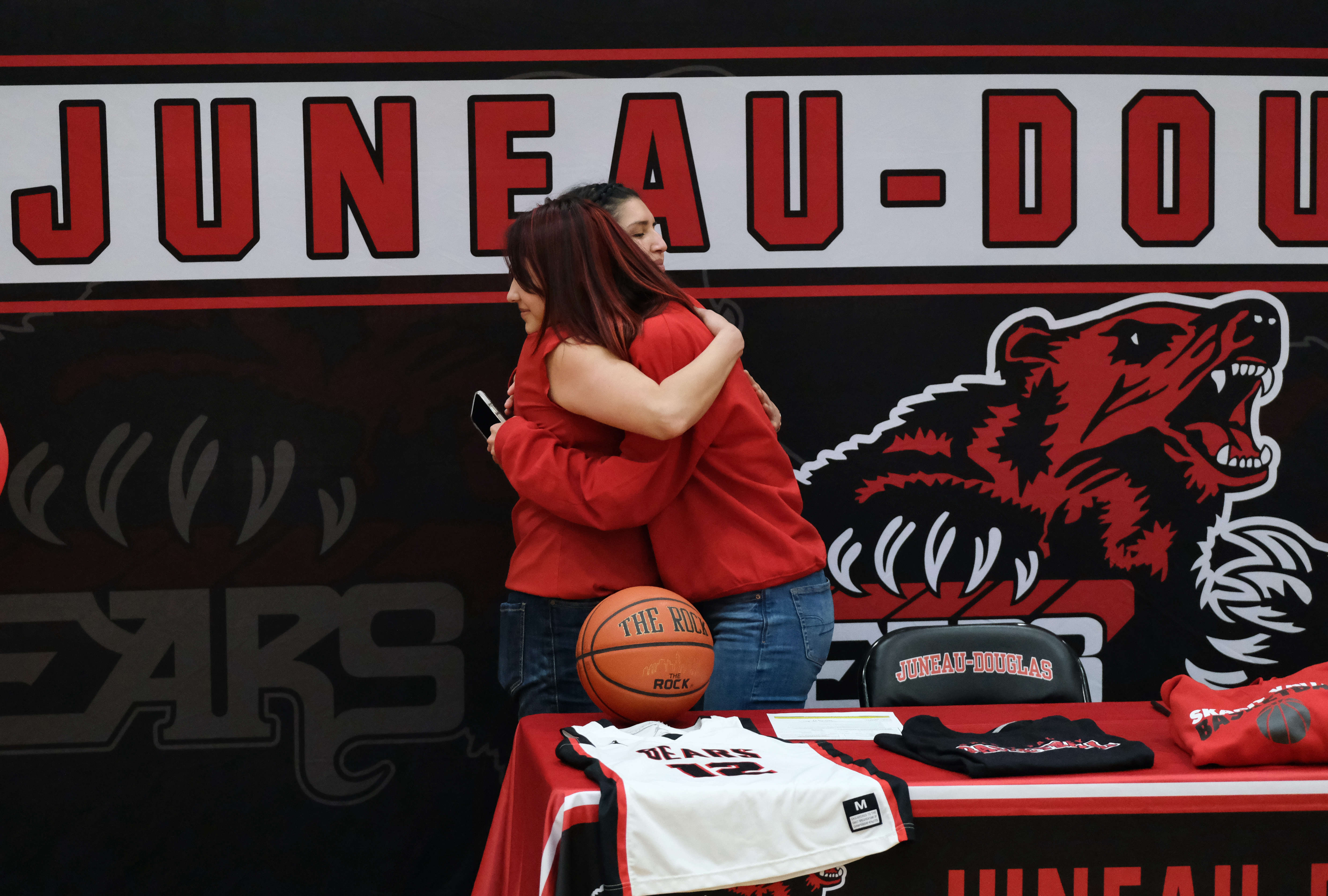 Above - Trinity Jackson hugs her mother Jasmine James after signing a letter of intent on Wednesday to play basketball at Skagit Valley College. 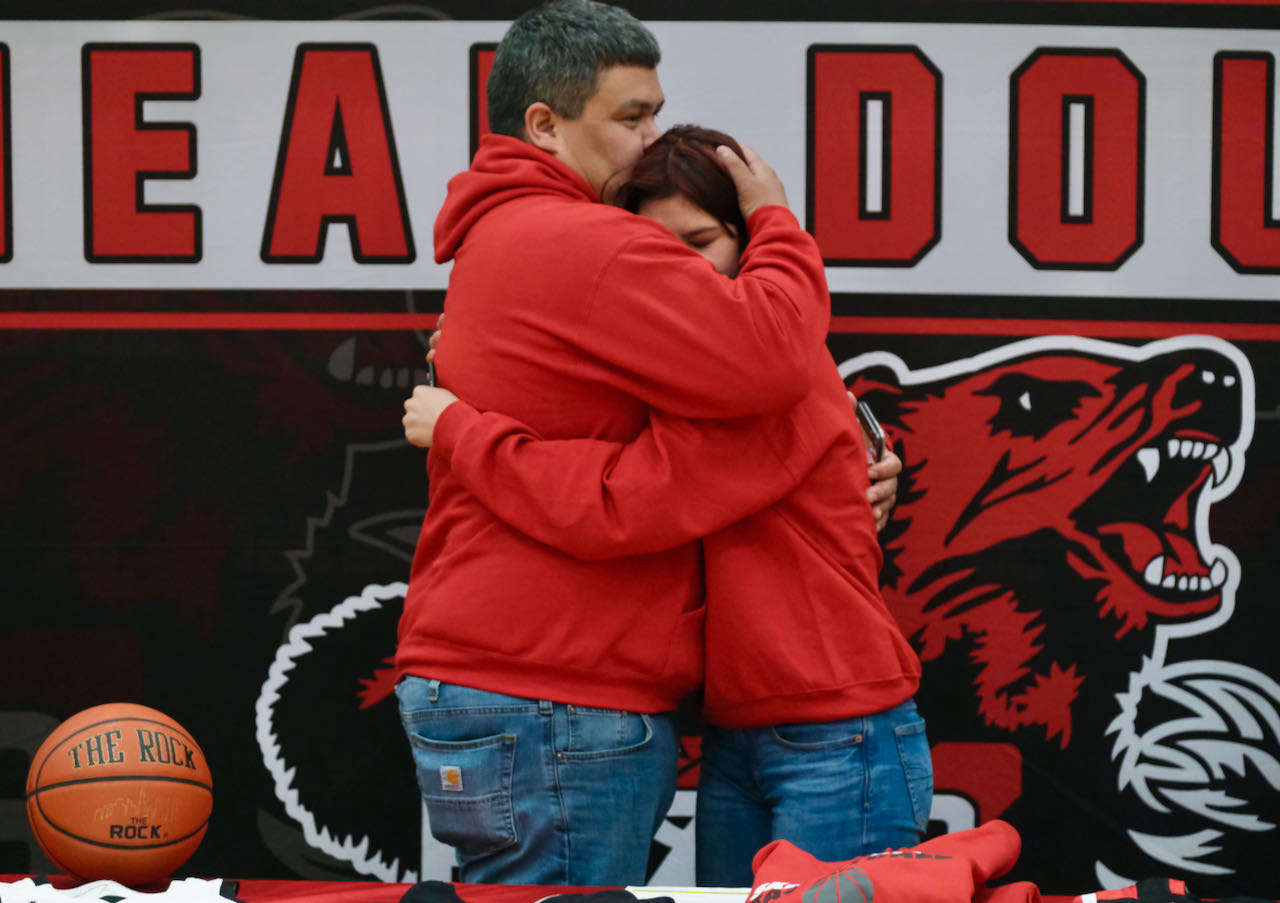 Above - Brandon Jackson hugs his daughter Trinity after she signed a letter of intent to play basketball at Skagit Valley College on Wednesday. 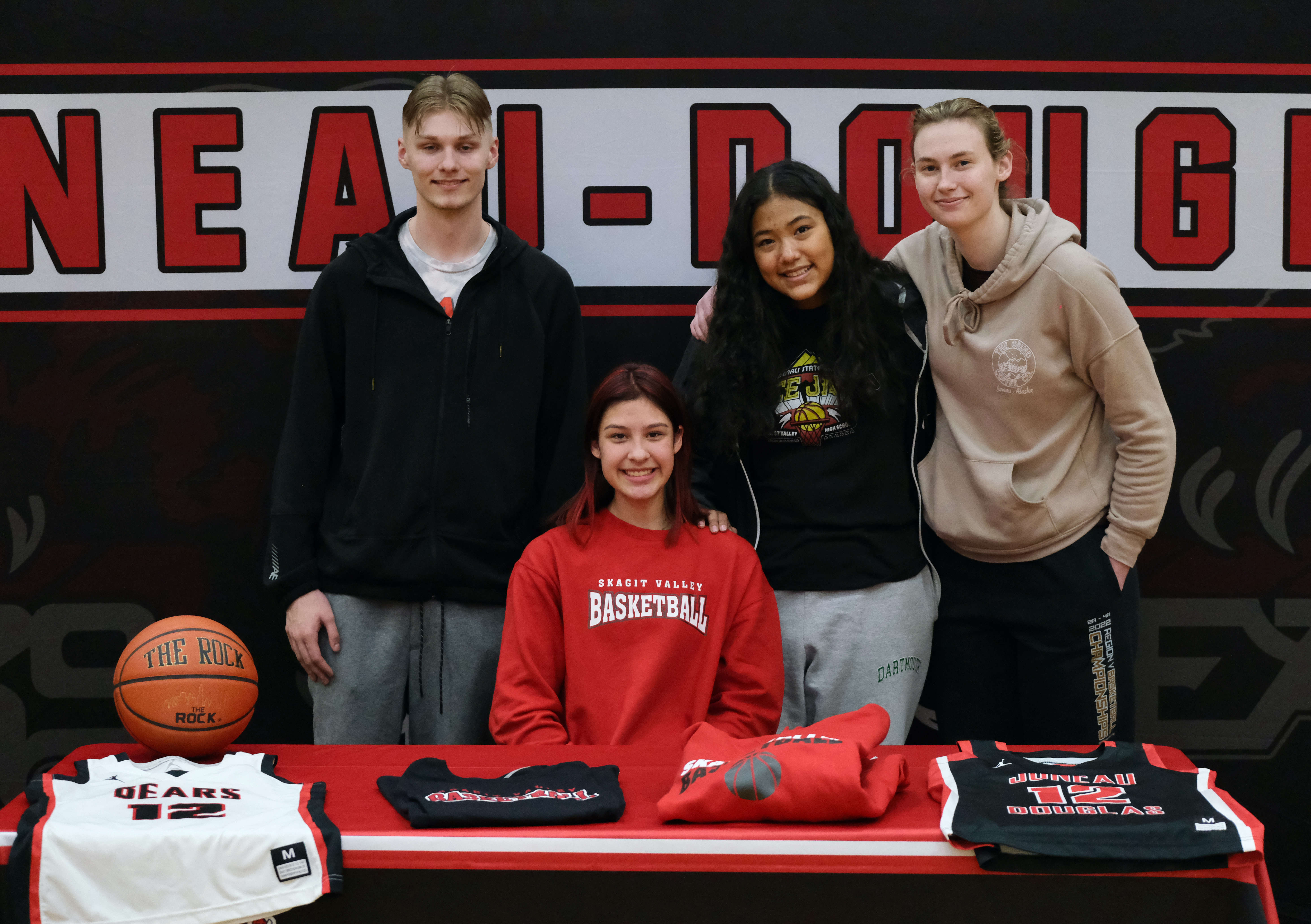 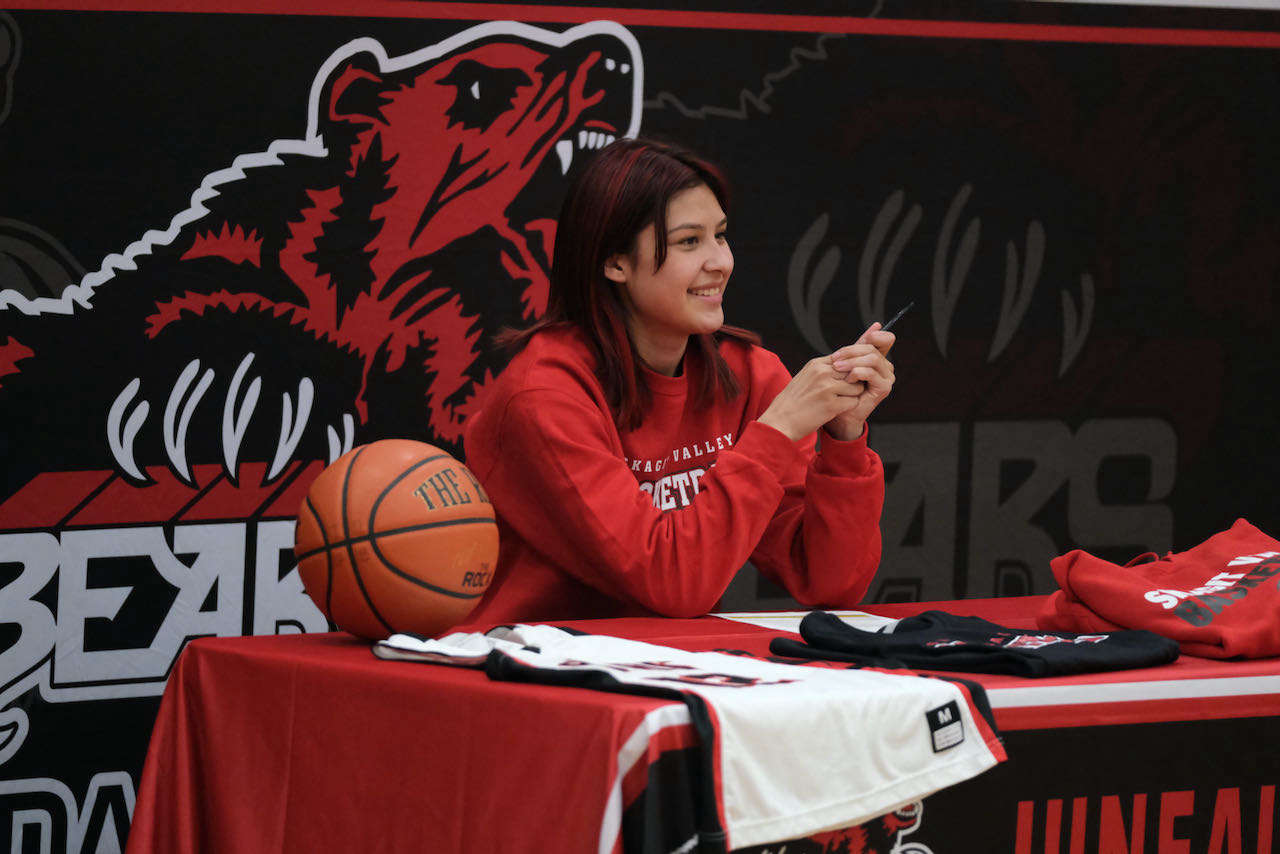 Above - Crimson Bears senior Trinity Jackson is shown preparing to sign a letter of intent on Wednesday in the JDHS gymnasium to play basketball at Skagit Valley College.