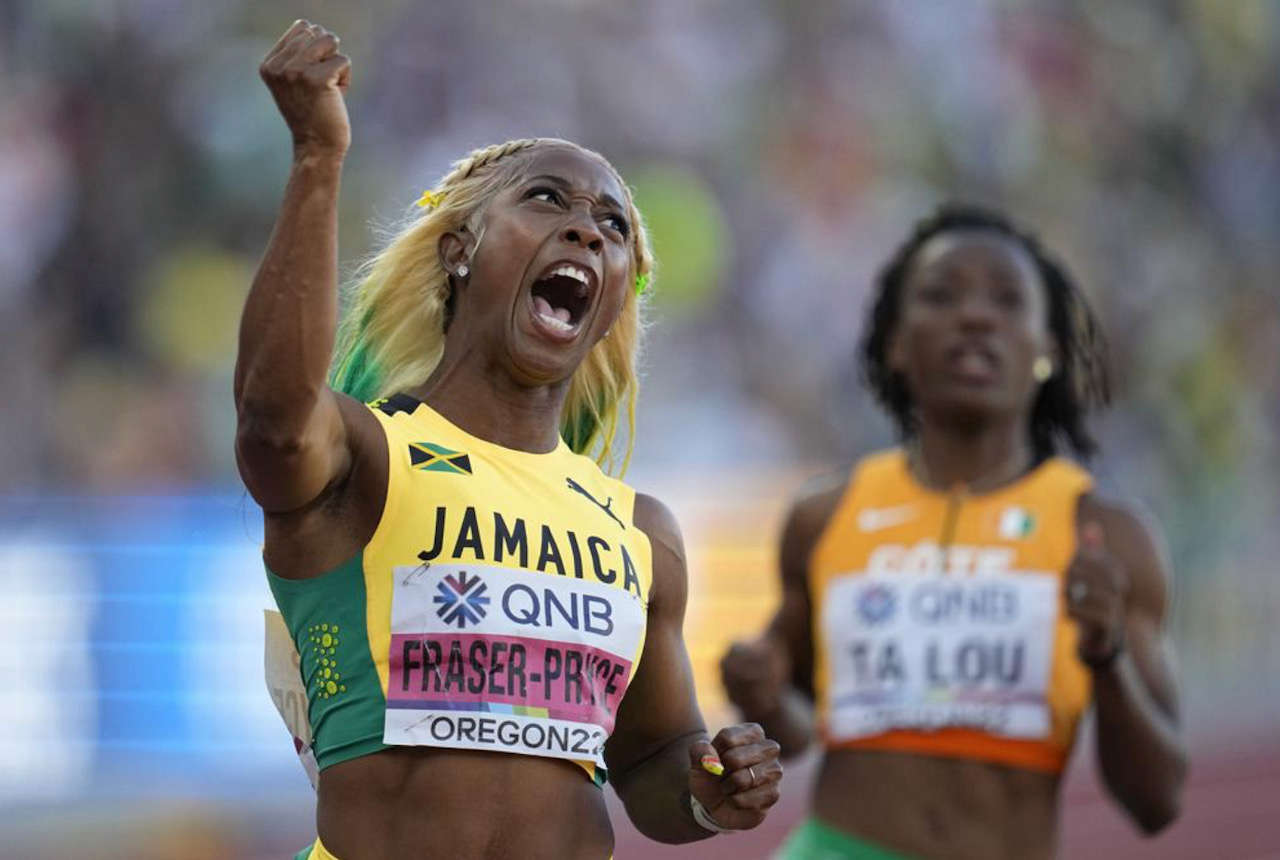 Shelly-Ann Fraser-Pryce, of Jamaica, reacts after winning Gold in the final in the women's 100-meter run at the World Athletics Championships on Sunday, July 17, 2022, in Eugene, Ore. (AP Photo/Ashley Landis)

EUGENE, Ore. (AP) — That mile-wide smile would come a split-second later. When Shelly-Ann Fraser-Pryce saw her name come up first Sunday night in the 100-meter final, she pumped her right fist in the air twice and let out a loud scream toward the stands.

And shame on anyone who thought it was over for Jamaica’s favorite 35-year-old mom — the country’s most-celebrated 100-meter runner this side of Usain Bolt.

Fraser-Pryce sped her way back to the top of the sprint game, winning her fifth world title in the 100 — that’s two more than Bolt amassed during his decade of dominance — by leading a Jamaican sweep and knocking off the favorite, two-time Olympic champion Elaine Thompson-Herah.

“So many people believe that when women turn 35, it somehow diminishes our gift, our talent,” Fraser-Pryce said. “But I’m still able to line up and compete, and that is very special.”

Running out of Lane 6, Fraser-Pryce led all the way on a gorgeous, 74-degree night in Oregon and crossed the line in 10.67 seconds. She beat Shericka Jackson by 0.06 seconds while Thompson-Herah finished a surprising third in 10.81.

The smile came later. Lots of them, in fact.

With her blonde hair cinched into a braid up top, and with green-tinted locks flowing in the breeze, Fraser-Pryce offered smiles and took selfies with the fans as she jogged through her victory lap.

It was a different scene than last year in Tokyo, when she seemed puzzled and frustrated at how she could’ve finished second to Thompson-Herah at the Olympics by such a sizable margin — 0.13.

The night began with thought that Thompson-Herah might knock off Florence Griffith-Joyner’s 34-year-old world record of 10.49. Less than a year ago, Thompson-Herah ran 10.54 on this very same track in the Prefontaine Classic to join Flo Jo as the only other woman to go lower than 10.6.

Fraser-Pryce has run exactly 10.6 before, though, and instead of Flo Jo’s record going down, it was one held by Marion Jones — her 23-year-old world championship mark of 10.70 — that went by the wayside.

It was no huge surprise that the aftermath in the corridors of the stadium felt like a party.

Dozens of ticketholders wearing “Shelly-Ann” T-shirts — complete with a picture of her, back in the day, when she still wore braces — were making their way to the exits, a few of them high-fiving.

One of them, a former elite sprinter in Jamaica, Errol Byles, told of meeting Fraser-Pryce on an airplane. They exchanged numbers, and stayed in touch. Before worlds, he asked her to send some shirts, and they wore them with pride walking out.

Byles reminisced about the vibe in Jamaica when the 21-year-old then known as Shelly-Ann Fraser qualified for her first Olympics, back in 2008. She was too young, the skeptics said, and had no business taking the spot that could’ve gone to the reigning world champion at the time, Veronica Campbell-Brown.

Fraser did take that spot, then led a Jamaican sweep in the 100. It felt like a bit of an undercard to Bolt’s hot-dogging, world-record-setting victory the night before. Still, a star was born.

And so, a night after the U.S. swept the podium in the men’s 100, Fraser-Pryce and Co., showed there remains plenty of speed down on the island.

Thompson-Herah, who paced slowly, several steps behind Fraser-Pryce and Jackson, during the start of the victory lap, expressed mixed emotions.

“It means a lot to us. We have been working hard,” she said. “One-two-three at the Olympics, and one-two-three at championships. Even though I wanted to win, it didn’t work out. But I’m still keeping the journey going.”

So too, it turns out, is Fraser-Pryce.

Her latest victory marks the defense of the title she won in 2019, a win that came two years after she missed the worlds in London while having her baby, her now 4-year-old son, Zyon. She called that “a victory for motherhood.”

On that night, she also told the story of sitting on her bed and crying the day she learned she was pregnant. People suggested her career was over.

Not by a long shot.

“It’s very special to be able to still be here,” Fraser-Pryce said. “Just to show other women that you can start from anywhere and you can still experience success, not only in your 20s, but in your 30s, and it’s still going to be meaningful.”

The Jamaican sweep offered a brief change of plot from what’s turning into quite an American show in the first worlds to be contested in the United States.

Minutes before the women’s 100, Grant Holloway and Trey Cunningham finished 1-2 in the 110 hurdles. The race might have been a sweep were it not for a false start by Oregon receiver-hurdler Devon Allen, who came into the meet ranked second in the world. The red card was met with lusty boos from the crowd. Allen took his time leaving the track, clearly not happy with the call.

Around that time, Ryan Crouser was putting the final touches on America’s 1-2-3 finish in the shot put. It was Crouser’s second straight world title to go with the win at last year’s Olympics. His rival, Joe Kovacs, finished second and teammate Josh Awotunde was third.

“We’re proud of it. We always say we’re the best shot put country in the world, and today we proved it,” Kovacs said.

Also wrapping up at that time was the 1-2 finish by American pole vaulters Katie Nageotte, who adds this to her title in Tokyo last year, and Sandi Morris, who now has three silver medals from worlds.

Earlier in the day, Americans Brooke Andersen and Janee’ Kassanavoid won gold and bronze in the hammer throw. By the end of Day 3, the U.S. had 14 medals — 11 more than Jamaica and three other countries tied for second; and six golds, which was triple the total for second-place Ethiopia.

One of Ethiopia’s golds came from Tamirat Tola in Sunday morning’s marathon. In the men’s 10,000, world-record holder Joshua Cheptegei of Kenya defended his world title in 27:27.43. The day’s other champion was Mykolas Alekena of Lithuania in the discus throw.