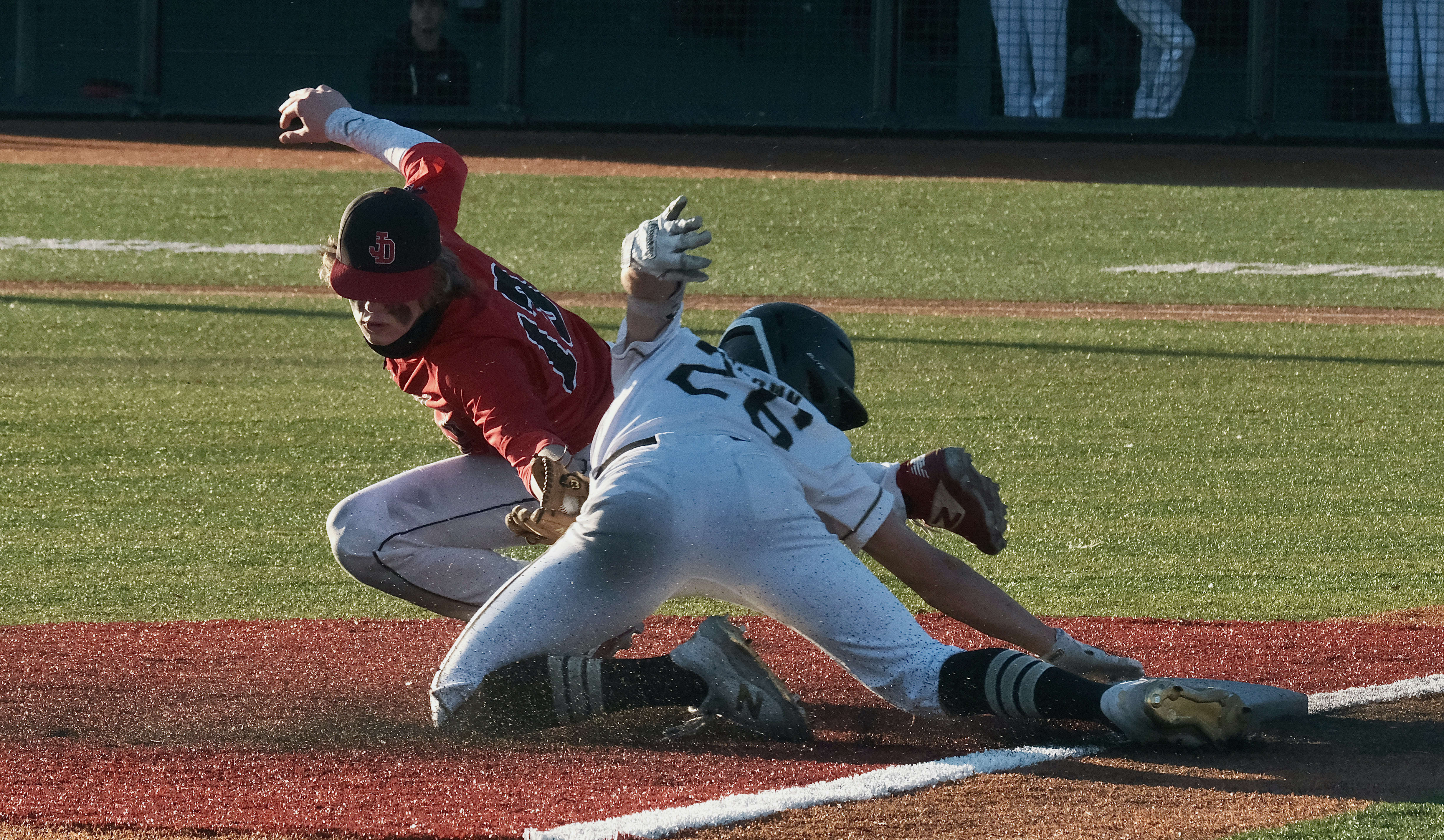 JDHS third baseman Kaleb "Simba" Campbell is shown tagging a runner out at the state tournament last season. Campbell is among a strong returning cast for the Crimson Bears. (Klas Stolpe/KINY)

Juneau, Alaska (KINY) - In what should have been a rebuilding season the Juneau-Douglas High School: Yadaa.at Kalé baseball team showed their foundation is already in place as the Crimson Bears won two and lost one against their competition at last weekend’s Sitka Invitational.

“We definitely lost some talent last year,” JDHS coach Chad Bentz said. “We lost some good players last year, we had a lot of great players… Garrett (Bryant),  Brock (McCormick), Christian (Ludeman), and all three pitched too… but it was great to be back out there in Sitka, and the best part is we played really well. We (coaches) barely made any calls, probably less than three. We just said ‘you guys are on your own, you guys have fun, play hard and let’s see what you have, show us what you got. Just play ball and have fun.’ And man did they do that.”

The Crimson Bears opened their Sitka road trip with a 7-4 win over Ketchikan on Thursday behind junior Caden Mesdag who went 2-3 at the plate with one run batted in and two runs scored. Classmate Derrick Schauwecker went 1-3 with two RBI and one RS. Classmate Garrison Luben had one RBI, and seniors Kai Schmidt, Gaby Soto, junior Joe Aline and sophomore Landon Simonson one hit each.

JDHS finished their tournament with a 6-2 loss to Sitka, also on Friday. B. Nelson went 2-3 with two RBI. Soto scored twice and sophomore Lamar Blatnick and Luben had one hit apiece. B. Nelson pitched 2.2 innings, allowing three hits, three runs and striking out two; Mesdag allowed one hit and three runs in a relieving inning; and P. Nelson went two innings with three strikeouts.

Bentz said the main portion of the pitching rotation will be Schmidt, Crupi and Luben.

“I think Garrison is our strongest pitcher,” Bentz said. “I think Kai is our most consistent strike thrower… Eli has the dirtiest stuff, he doesn’t throw a ball that goes straight…”

Bentz noted some main positions and players that include P. Nelson in center, Mesdag at shortstop and Campbell at third.

“He’s our general,” Bentz said of Mesdag. “He is taking over that shortstop position and had a solid game…”

Bentz said Blatnick will take most of the catching duties, Campbell will have third base, B. Nelson or Simonson first base, Crupi or Soto second base, Schauwecker right field, P. Nelson center field, and Soto in left field, among others.

In addition Luben can play infield or outfield, Crupi and B. Nelson can play left field, Schmidt and Walker can take time behind the plate.

JDHS will travel to Ketchikan on Friday for a Southeast Conference series against the Kings.