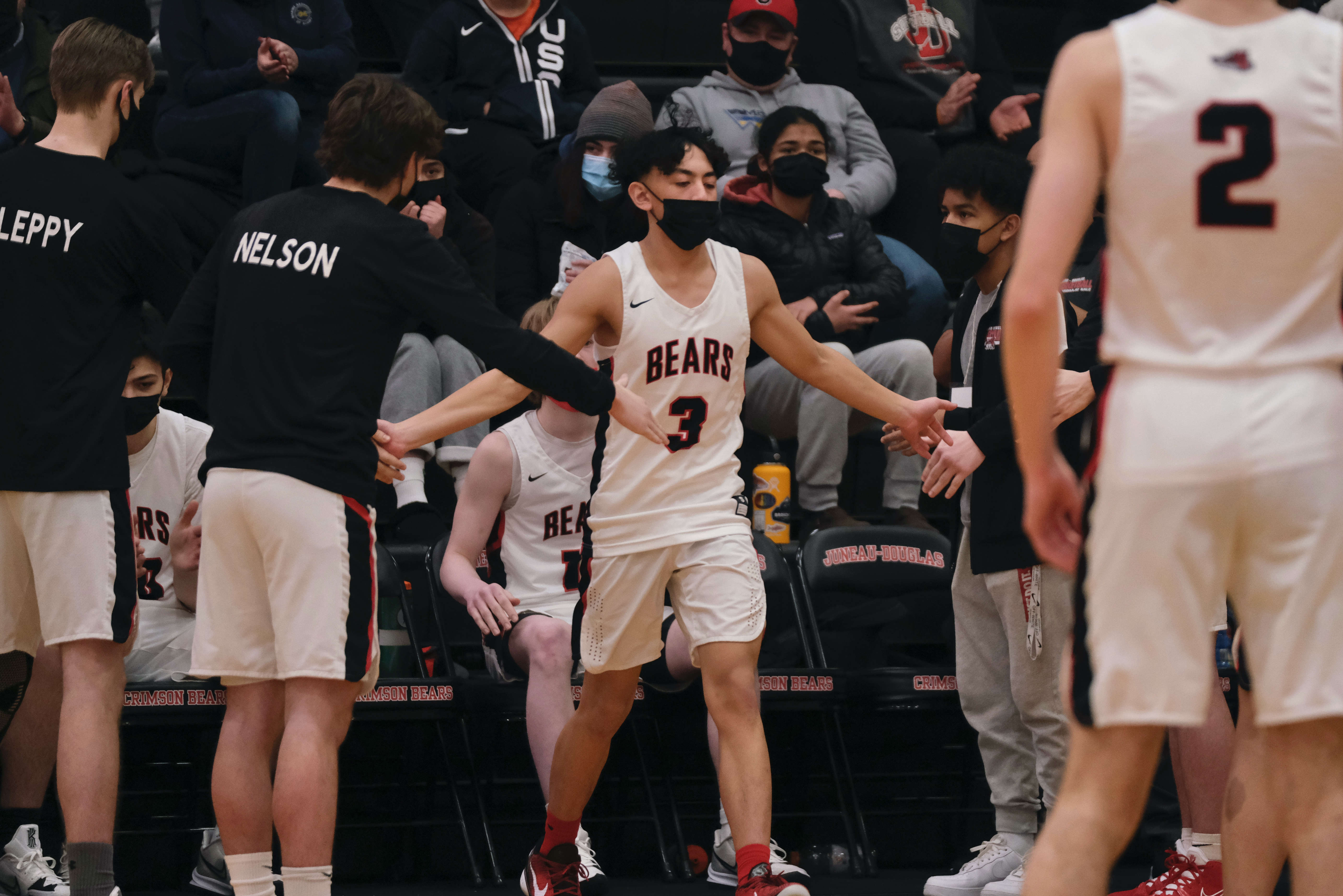 JDHS sophomore Alwen Carrillo (3), shown in an early game this season, was chosen Player of the Game in the Crimson Bears 73-59 loss to Wasilla at the Ice Jam tournament in Fairbanks on Friday. (Klas Stolpe)

Seniors Porter Nelson and Tias Carney had the hot hand early, each hitting from past the arch while sophomore Sean Oliver scored on a steal and junior Orion Dybdahl hit inside to give the Crimson Bears 15 first quarter points.

Wasilla’s Connor Dudley would collect three baskets in the first stanza while Arthur Adams hit twice from distance as the Warriors tallied 19 points.

The Crimson Bears saw first hand how good the Warriors are and they were able to play with them, but JDHS again struggled from the field while West Valley did not.

West Valley put up another 21 points in the second quarter while JDHS scored nine to trail 40-24 at the half.

“We have that affect on teams,” Casperson said. “They are good. Our deficiencies are glaring at this point. But what is consistent is that we are playing very hard. We are having a really hard time putting the ball in the basket with any kind of consistency. We’re actually executing offensively quite well a lot of times, and then we just don’t finish.”

On multiple occasions the Crimson Bears would get second and third shots after making an initial good play to get to the basket.

“We just have to stay the course, keep working, and believe that it is going to improve,” Casperson said. “We’re doing a good job rebounding, then we miss the put back. We penetrate the lane and collapse the defense and get a great kickoff to a wide open three, and then it rattles around and pops out.”

JDHS would score 22 points in the third quarter on 10 field goals, two past the arch. Sophomore Alwen Carrillo and Carney would hit from deep while junior Joseph Aline, Oliver and Dybdahl hit two buckets each.

Wasilla, however, would also score 22 points in the stanza, hitting eight field goals, six from past the arch. Adams would hit three from deep, Dylan Jeffus two and Parker Kroon and Trent Truax one each as the Warriors held a 62-46 lead heading into the final eight minutes.

The Crimson Bears outscored the Warriors in the fourth quarter 13-11 behind eight points from Aline.

“Joey gave us a nice lift off the bench,” Casperson said. “And Tias had one of his better games, he is playing 100% effort all the time, diving on the floor, working hard.

“We were able to put 59 points up tonight, and that was nice,” Casperson said. “A lot of that was sparked with a more intense defensive pressure in the second half. We really got after them and caused some turnovers.”

Carrillo was selected the Player of the Game for JDHS.

“He did a lot of things that didn’t really show up in the stat book tonight,” Casperson said. “He did a good job with attacking the paint and creating opportunities for his teammates. And then defensively he was more of a presence.”

The Crimson Bears will finish their tournament against West Valley today.

Also in Fairbanks, the JDHS junior varsity defeated Tri-Valley 89-13 and will play in the championship game against the West Valley JV.