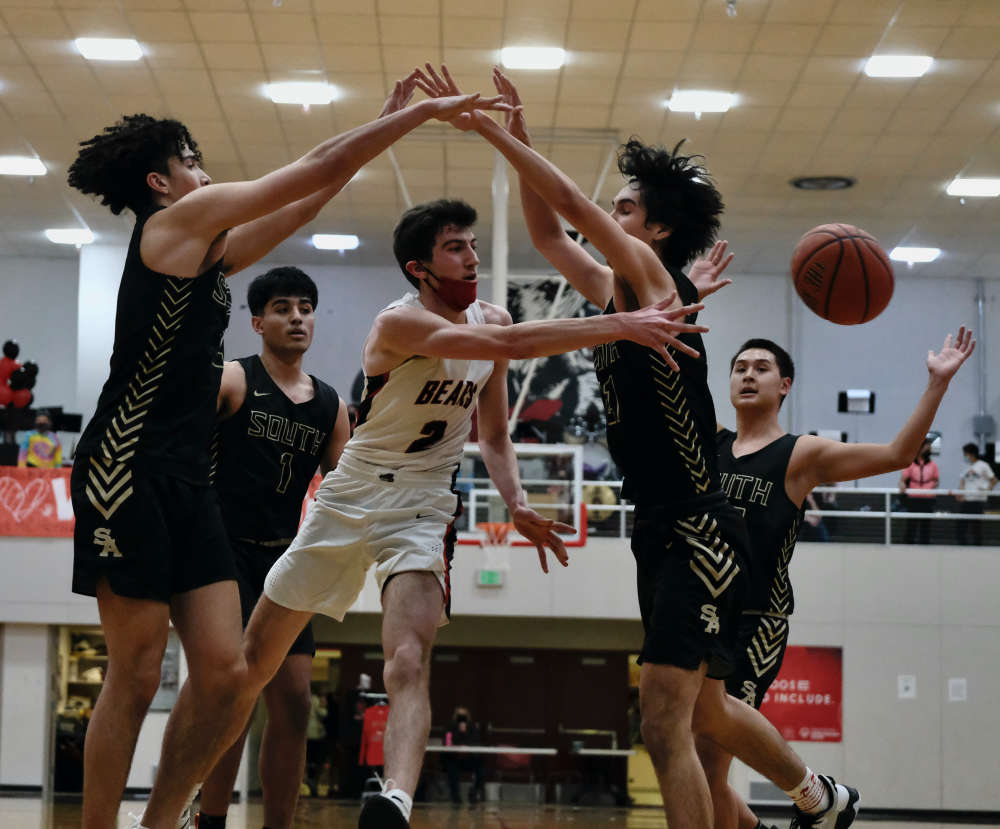 Juneau, Alaska (KINY) - The Juneau-Douglas High School: Yadaa.at Kalé Crimson Bears boys basketball team proved they can compete with the top teams in the state as they led the fourth-ranked South Anchorage Wolverines by 10 points in the fourth quarter before falling 72-63 on Saturday at JDHS.

“It was interesting to see,” Juneau-Douglas coach Robert Casperson said. “They are a very good team, very disciplined, very confident and senior driven. They have 11 seniors on their roster.”

South struck back with shots beyond the arc by Fuller and senior Ron Childress to trail 12-11.

JDHS senior Jake Sleppy scored on a rebound inside and Dybdahl hit a short jumper for a 16-11 lead that South’s Childress answered from outside the arc.

Dybdahl would rebound a Crimson Bears miss and score for a 20-14 advantage.

Key to the JDHS play was their defensive pressure led by senior Tias Carney, who was assigned South senior leading scorer Zach Williamson.

Williamson would get his only basket of the first quarter with under a minute to play, draining a deep shot past the arc to pull South to within three points, 20-17.

Carrillo answered for JDHS with a circus shot past three South defenders for a 22-17 advantage. South would add single free-throws by sophomore JP Castillo and Williamson to trail 22-19 after eight minutes of action.

“We just played aggressively and played confidently,” Casperson said. “One thing that was nice is we absolutely made some adjustments from last night and they put them into practice in the game tonight…defensively we did a much better job with our foot positioning and keeping guys out of the middle and it was really great to see our guys make that improvement in one day. We worked on that in shoot-around and they were in there doing it in the game.”

JDHS’ Carney moved his feet the quickest, holding South’s Williamson to 11 points in the game.

“And he had to earn them,” Casperson said. “Oh boy did he have to earn them. Tias (Carney) did an excellent job. His defensive intensity and presence was really impressive. He’s given us all he’s got. He’s really working hard and guys are following his lead. It’s contagious… It was also nice to see Alwen Carrillo focused and locked in defensively… tonight he kept those kids in front of him and he made them work, and it was impressive.”

JDHS junior Joe Aline started the second quarter with an old-fashioned three-point play for a 25-19 advantage.

South senior Alonso Ponce De Leon answered with a shot past the arc to pull to 25-21.

Carrillo and Dybdahl put the Crimson Bears up by 10 points, 36-26 at the start of the third quarter and Carney drove twice for baskets to counter South’s Ponce De Leon and Williamson to keep that margin for the Crimson Bears with a 40-30 score.

Carrillo gave JDHS their largest lead of the game, hitting past the arc for a 43-32 advantage with under four minutes remaining in the stanza. JDHS also drew the fourth foul on South’s Fuller.

Both sides exchanged baskets into the fourth quarter with the Crimson Bears holding a 49-39 lead.

South showed why they are ranked so highly in the State, opening the final stanza with shots past the arc by Ponce De Leon and Childress and forcing a JDHS turnover. The Crimson Bears tried to keep pace with free-throws by Carrillo and Oliver but the Wolverines found another deep three by Childress and Castillo and one by junior Zane Salazar to command the lead.

South would outscore JDHS 33- 14 in the eight minute stanza for the win.

“We did a good job of moving the ball and trying to execute our stuff offensively,” Casperson said. “Our cuts were sharper, our screens were tougher. The result isn’t what we wanted. We wanted to win that game. But I’ll tell you, we did everything within our power to give ourselves a chance to win that game and then they just asserted their will in that fourth quarter. They are a good team. There is no doubt in my mind they have a chance to challenge for a Cook Inlet Conference championship and they’ll be a force to be reckoned with.”

The Crimson Bears also lost to South Anchorage on Friday, 70-58.

After Saturday's game Casperson said he told the Crimson Bears, “I don’t mind getting beat in that game if, and the if is huge here, if we learn from it. And I really believe we learned from Friday night and played better tonight. I think if we learn from tonight, that’s kind of been the m.o. of this team, they’re taking lessons along the way and figuring it out. One thing that has been an absolute constant for us is we have worked extremely hard. They are just playing extremely hard and that is going to take us places. That makes a difference.” 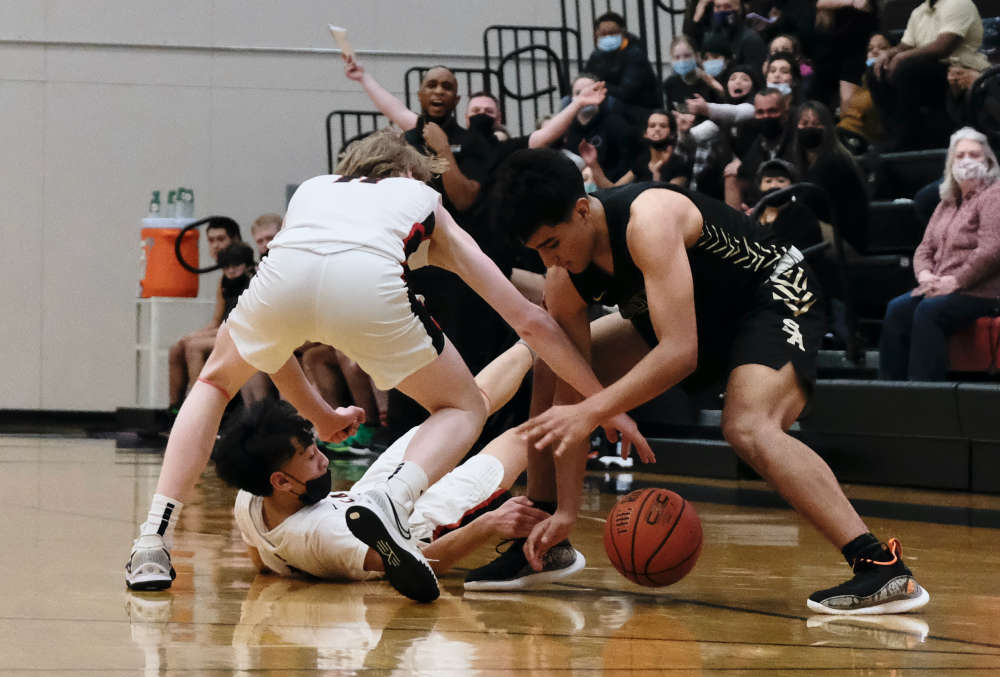 Above - Juneau-Douglas sophomores Sean Oliver and Alwen Carrillo battle for a loose ball with South Anchorage senior Alonso Ponce De Leon during the Crimson Bears 72-63 loss to the Wolverines on Saturday at JDHS. (Klas Stolpe)