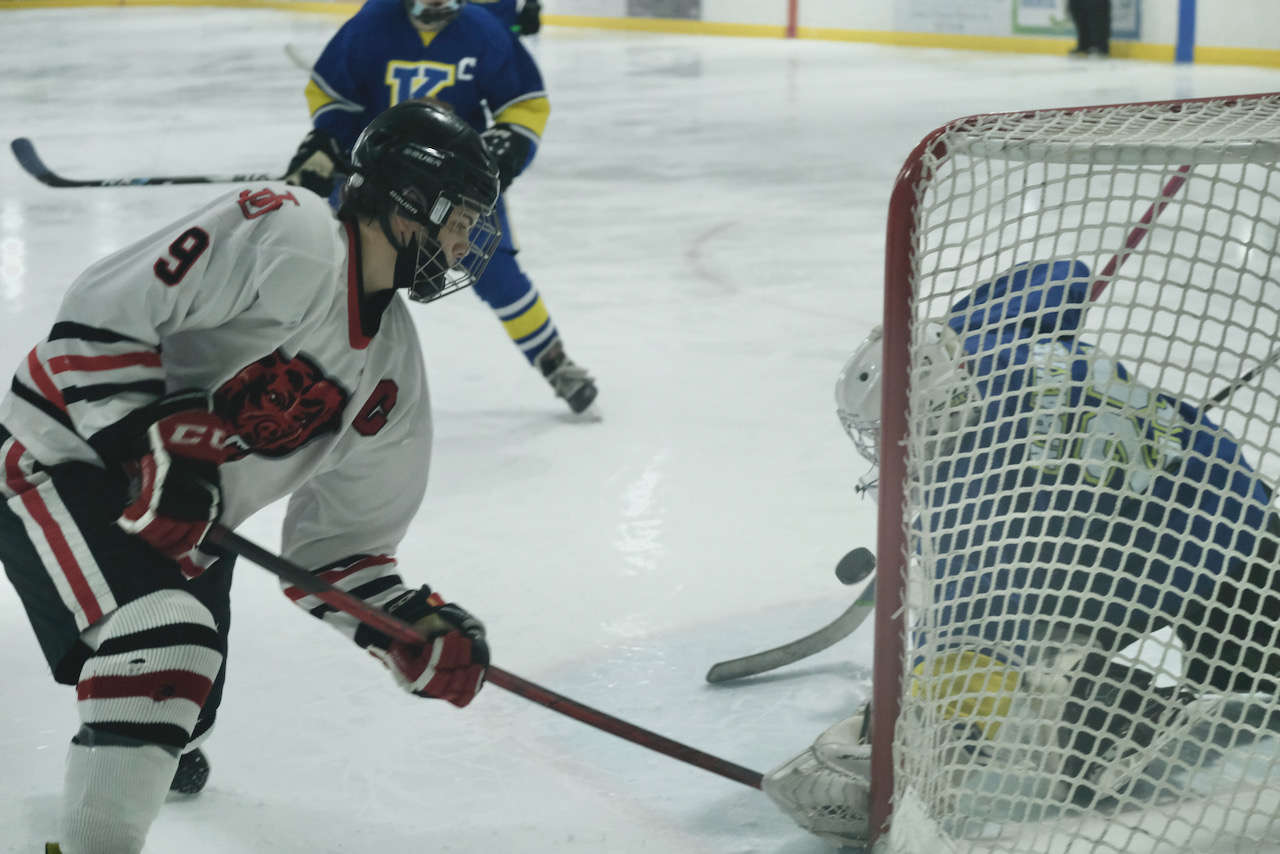 Juneau, Alaska (KINY) - In the sports world it is a given that road trips will be hard as players face unfamiliar ice, hostile fans and uncomfortable accommodations. The Juneau-Douglas High School: Yadaa.at Kalé Crimson Bears hockey team added a delayed flight, a long drive and a flat tire as they opened a three-game road swing with a 4-2 loss to Soldotna on Thursday.

“It is always exciting,” JDHS coach Luke Adams said. “And we had a long lay off over the holidays, extended vacations. We don’t make excuses for that. A lot of our kids were practicing the past week. We just couldn’t put it together here, came up short on the score sheet, 4-2. They just got a few more bounces and they had a little more energy than us today. We didn’t have our best game whatsoever but we’ll rebound and get ready for tomorrow.”

Soldotna’s Daniel Heath scored a goal in the first period and two more Stars, Boone Theiler and Aiden Burcham, found the net in the second stanza before the Crimson Bears scored twice in the final period.

“Those were goals we call ‘dirty goals,’ just hard work goals,” Adams said. “They’re not pretty but when we needed a couple energy shifts Sam got out there and got to the middle of the ice. Andre was on assist for both of them, and also Kovach got one throwing the puck to Sam through the middle and Sam just beat the goalie through the legs. Good energy boost for us but we took a couple penalties right after that and it kind of killed our momentum.”

Soldotna’s Burcham would score with three minutes remaining to seal the game for the Stars.

“For these kids it is just a situation we need to be in so they know what to do and what not to do when the games matter like these,” Adams said.

JDHS will play Soldotna again tonight and then play Saturday against Kenai on an outdoor rink.

“It is supposed to be about negative 12 degrees at game time,” Adams said of Saturday’s contest. “The arena there is an open covered arena. The sides are open, so natural refrigeration we’ll say. The coaches will be layered up and the players won’t mind the intermission breaks when they get to go to the locker room to defrost and dethaw. But it’s a fun experience, it’s really cool and it’s unique, and that’s why we love it.”

After this road trip the Crimson Bears host conference rivals Palmer on Jan. 14-15 and Tri-Valley on Jan. 17.