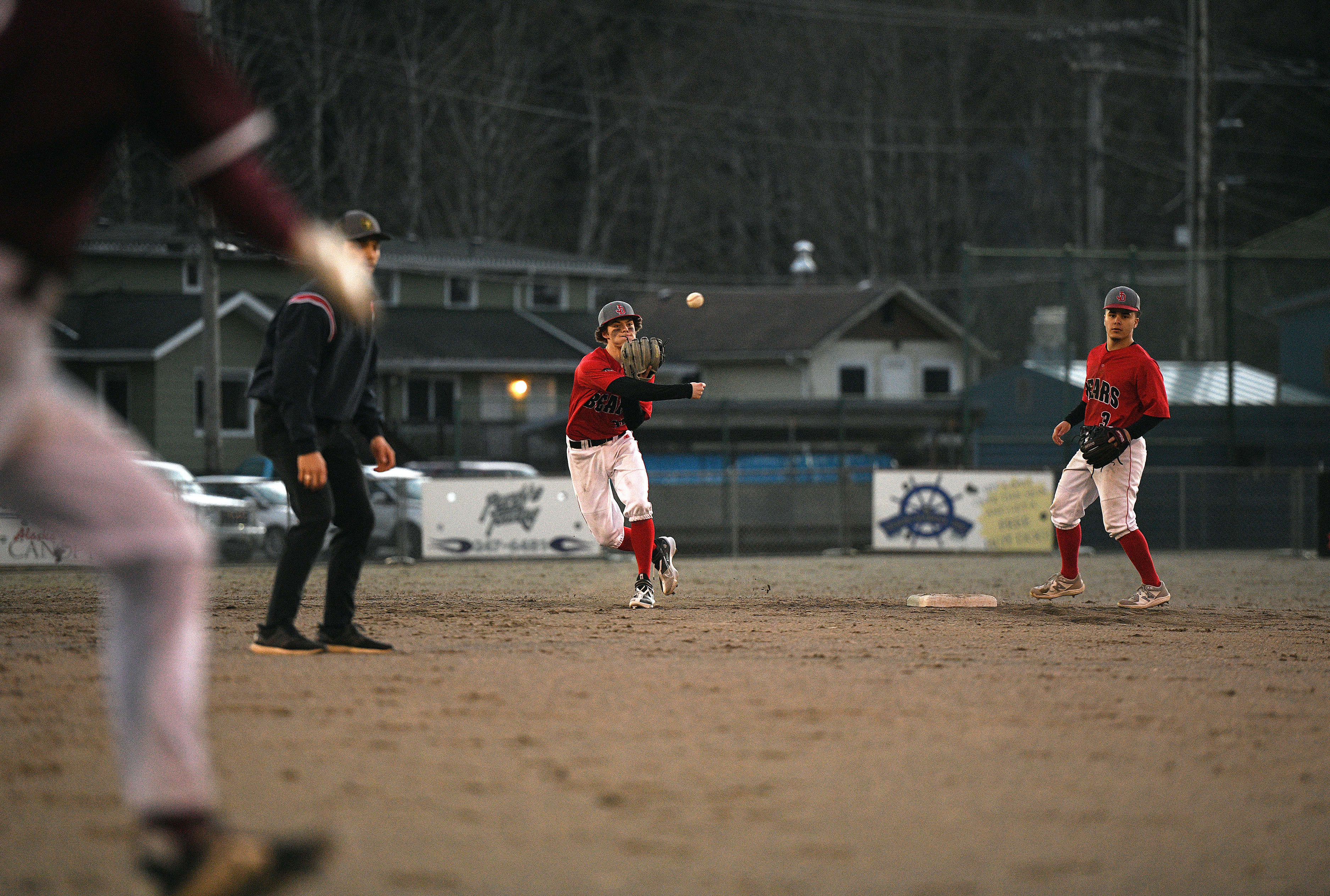 On Friday, JDHS opened a double header with an 11-1 win behind starting pitcher Garrison Luben and reliever Joe Aline.

Luben went four innings, allowing just two hits and the one run while striking out eight batters and walking five. In one inning of closing work Aline struck out two and walked one.

Senior Porter Nelson hit a three-run homer in the top of the third inning to get the Crimson Bears’ bats moving and junior Kaleb Campbell hit a three-run double to give JDHS a 6-1 lead that they never relinquished.

In the Friday nightcap 2-0 loss, the Crimson Bears were in a pitching duel with JDHS junior Eli Crupi against Ketchikan’s Colby Hamchay.

The Crimson Bears would only get one hit each from Soto, Schauwecker, Campbell and Crupi.

JDHS threatened to score in the top of the sixth inning with Schmidt earning a two out walk and advancing to third on a Soto bunt and a Schauwecker single. With the bases loaded Schmidt was caught stealing home.

In the top of the seventh, Campbell singled but was put out on a fielder’s choice hit by B. Nelson to short. Nelson was stranded at second base after a Crimson Bears strikeout and a fly ball out to left field ending the game.

JDHS fell 10-4 on Saturday and trailed 7-0 before they got on the scoreboard in the fourth inning with a run and added three more in the top of the sixth inning as B. Nelson put a shot over the right field fence that scored Campbell and Luben who had earned walks to open the inning.

Schmidt started on the mound, going 2.2 innings, allowing one hit and six runs, and striking out four batters and walking five.

Marcus Underwood went one inning, allowing one run while striking out one batter and walking one.

JDHS will host Sitka on Friday and Saturday at Adair Kennedy Field.

The Falcons opened a Friday night double-header on the Sitka Wolves Moller Field with a 14-8 win behind a bat-heavy lineup that featured a 3-3 outing by senior Isiah Nelson, including two runs batted in, three runs scored and a walk.

In the Friday nightcap, TMHS fell 10-9 on a two-out passed ball with the bases loaded that ended the game.

The Falcons took a 1-0 lead in the first inning on a Quinto single scoring Ludeman and added two runs in the second with a Lewis single scoring Hartsock and Hart sacrifice scoring Lewis.

TMHS added three runs in the top of the fourth on bases loaded scores with I. Nelson earning a walk scoring J. Williams, Lewis scoring on a passed ball and Quinto being hit by a pitch that scored I. Nelson. Sitka scored four runs in the bottom half to tie the score at 6-6 and took a 7-6 lead in the fifth.

The Falcons tied the game in the top of the sixth with P. Williams hitting a single to score I. Nelson. The Wolves regained the lead with two runs in the bottom half.

TMHS tied the game in the top of the seventh inning as Hayes walked, Hartsock singled and both advanced on a Lewis ground out and scored on an I. Nelson two-out single to left field.

The Wolves earned a one-out walk to start the bottom half of the seventh, then added a pair of two-out walks to load the bases. A passed ball on a one-and-one count gave Sitka the win.

On Saturday, the Falcons earned just two hits in a 6-0 loss to the Wolves with both Lewis and Quinto getting singles. Hartsock and Lewis earned one walk apiece.

The Falcons travel to Petersburg for games on Thursday and Friday.

The Falcons opened their road series at Kayhi with a 5-4 loss in seven innings on Friday.

Ketchikan led 1-0 after one inning, but the Falcons tied the game in the top of the second inning on a lead-off home run by senior Sydney Strong.

Ketchikan scored two runs in the bottom of the third for a 3-1 lead.

The Falcons took the lead in the top of the fourth inning. Sophomore Kara Strong led off with a single, senior Tyler Johnson doubled and sophomore Ashlyn Gates walked to load the bases.

With two outs, sophomore Jenna Dobson singled in K. Strong, and senior Riley Harp singled in Johnson and Gates for a 4-3 lead.

Ketchikan scored two runs in the bottom of the seventh for the win as Gabby Mas led off with a triple and scored on a Paige Boehlert triple, tying the game and Shaelyn Mendoza hit a one-out single to score Boehlert.

Harp went 6.1 innings in the circle, allowing 11 hits and five runs, while striking out three batters and walking one.

Mendoza led with two RBI for the Lady Kings and three hits. Boehlert scored two runs, Rylie Welk, Mendoza and Mas one each.

The Falcons trailed 3-0 in Saturday’s win over Ketchikan starting the fourth inning but got a rally started with S. Strong and Payne earning walks, K. Strong loading the bases with a single and senior Aspen Kasper singling in S. Strong.

Johnson reached on a fielder's choice that outed Payne at home but Gates followed with a base-clearing home run for a 5-3 lead.

Kayhi tied the game in the bottom half on a double by Faith Easterly scoring Mendoza and Marley Lewis.

The Falcons added another five runs in the top of the fifth inning. Payne reached on an error, K. Strong singled and Kasper hit a fielder's choice, scoring Payne.

Johnson reached on a fielder's choice and Gates doubled, scoring Johnson for a 7-5 lead.

Sophomore Jack Lovejoy reached on an error scoring Gates, Dobson singled and Harp hit a fly ball that scored Lovejoy and Dobson for a 10-5 lead.

The Falcons final two runs came in the top of the seventh inning as Lovejoy walked and stole second base. Dobson singled  and Lovejoy stole home for an 11-5 lead.

S. Strong earned a walk and Payne singled to score Dobson for the 12-5 tally.

After a lead-off triple by Kayhi’s Pahang in the bottom of the seventh, the Falcons defense held with Payne, Dobson and Rentrop fielding fly balls at third, second and right field, respectively.

The Falcons play at Sitka on Friday and Saturday and the JDHS Crimson Bears softball team plays in California.