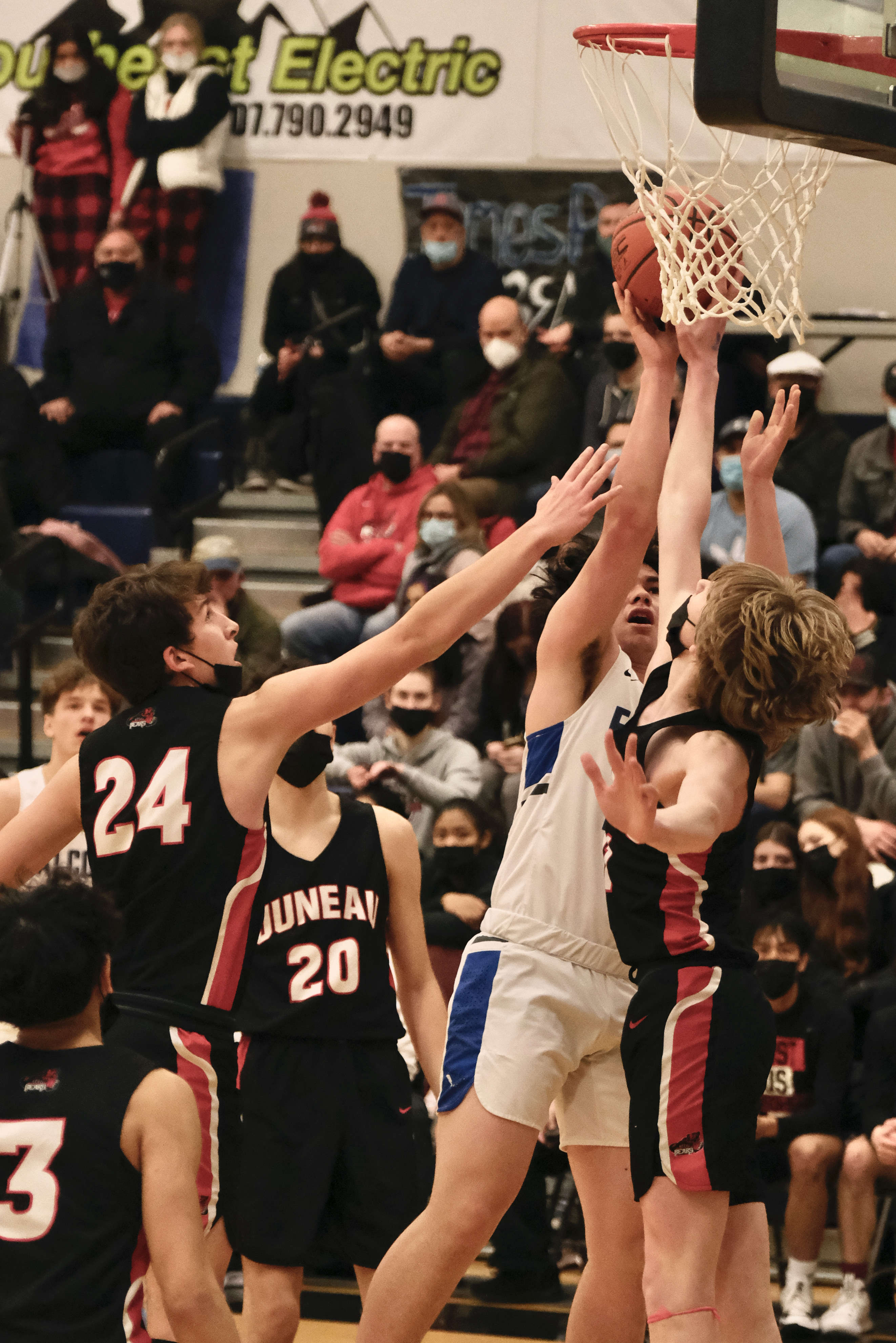 Juneau, Alaska (KINY) - The Juneau-Douglas High School: Yadaa.at Kalé and Thunder Mountain High School boys and girls basketball teams are either in the grind of Southeast Conference play or mixing in last non-conference games to fortify their skill level as the last third of the high school basketball season is upon the hardwoods of Alaska.

The Juneau Douglas boys host the Wasilla Warriors at 7 p.m. Thursday in the Crimson Bears den.

"We've seen Wasilla and expect that they will shoot the three well," Crimson Bears coach Robert Casperson said. "They made 14 of them while shooting 62% from deep against Colony last night."

The Crimson Bears will follow the Wasilla matchup with Friday and Saturday home games at 8 p.m. against their SEC rival the Ketchikan Kings.

“It will be nice to be off the island,” Ketchikan coach Eric Stockhausen said. “I have watched a lot of teams play this season, in person and live, and I can say I don’t think anybody plays as hard as Juneau. Those kids really get after it and play the entire 32 minutes at full speed. So they are going to bring a lot of intensity.”

Juneau Douglas is 4-12 overall and 1-1 in the SEC, splitting at the Thunderdome last weekend with a 63-50 win and a 56-55 overtime loss to their cross-town SEC rival TMHS Falcons.

"Ketchikan will be a battle," JDHS' Casperson said. "We expect them to work hard and shoot a lot of threes too. It is going to be an exciting three-game series of games for people to come watch."

“This is what you spend December 1 until now getting ready for,” Ketchikan's Stockhausen said. “But you can throw anything written on paper out the window when you have a rivalry game and a conference game. I think only once or twice in the 14 years I have been here has either of us swept the other one and it is not always the team with the best record that wins at the region tournament.”

“I don’t know a lot about them,” Falcons coach John Blasco said. “Wasilla is a very strong program. They have produced a lot of quality basketball players, many which go on to play college ball. You always have to be prepared for a talented team that executes quite well. If we can get a glimpse of them Thursday against JD… but we don’t know much about them. They are definitely in one of the tougher conferences in the state…”

Wasilla is fifth out of six teams in the Northern Lights Conference. Anchorage Christian, Kodiak and Colony are tied at the top of that conference, followed by Palmer, Wasilla and Soldotna.

Ketchikan defeated Wasilla 71-48 and lost to Colony 71-66, both games in the first week of the season.

Coach Blasco said the Falcons have to build off their momentum from last weekend’s split with JDHS.

“It was a physical and emotional weekend,” he said. “Great basketball but also tiring for the body and the mind. So we just have to shift our focus now to a team that is highly competitive and skilled and hopefully build off of the momentum that Friday and Saturday created.”

On the girls side, Thunder Mountain plays on the road in the Grace Christian Hardwood Classic starting Thursday when they face Barrow.

“It will be a challenge,” Lee said. “They will legitimately shoot 30 threes in the game and the difference is if they make 10 you are in a fight for your life, and if they make five you might be able to put them away. They are Colony-lite… Our guards are going to be tested.”

The tournament also features 4A power East Anchorage, Chugiak and Service and 2A power Tikigaq, as well as 3A Grace and Nikiski.

The tournament is a traditional elimination format such as the style teams will participate in at their respective region venues and at state.

Said Lee, “Our girls, in addition to needing experience, we need to, if you are going to go to state in the future or win regionals in the future, you need to understand the nature of win and advance. And playing for a championship. And playing in a championship. We scheduled this tournament intentionally. I wanted it before the last run of conference games. Three days of games gets you in a tournament mindset. Regardless of what happens you can’t get too high or too low because there is a game tomorrow that is meaningful. It will be a challenge for our backcourt and it’s a good measuring stick of where we are going into the stretch run of the conference.”

The Juneau-Douglas girls travel for a weekend series at Ketchikan’s Clarke Cochrane Gymnasium.

“Ketchikan is very patient offensively and crafty on defense,” Crimson Bears coach Steve Potter said. “We will have to take better care of the ball, especially down the stretch. But as always, our defensive focus and intensity will be key to our success.” 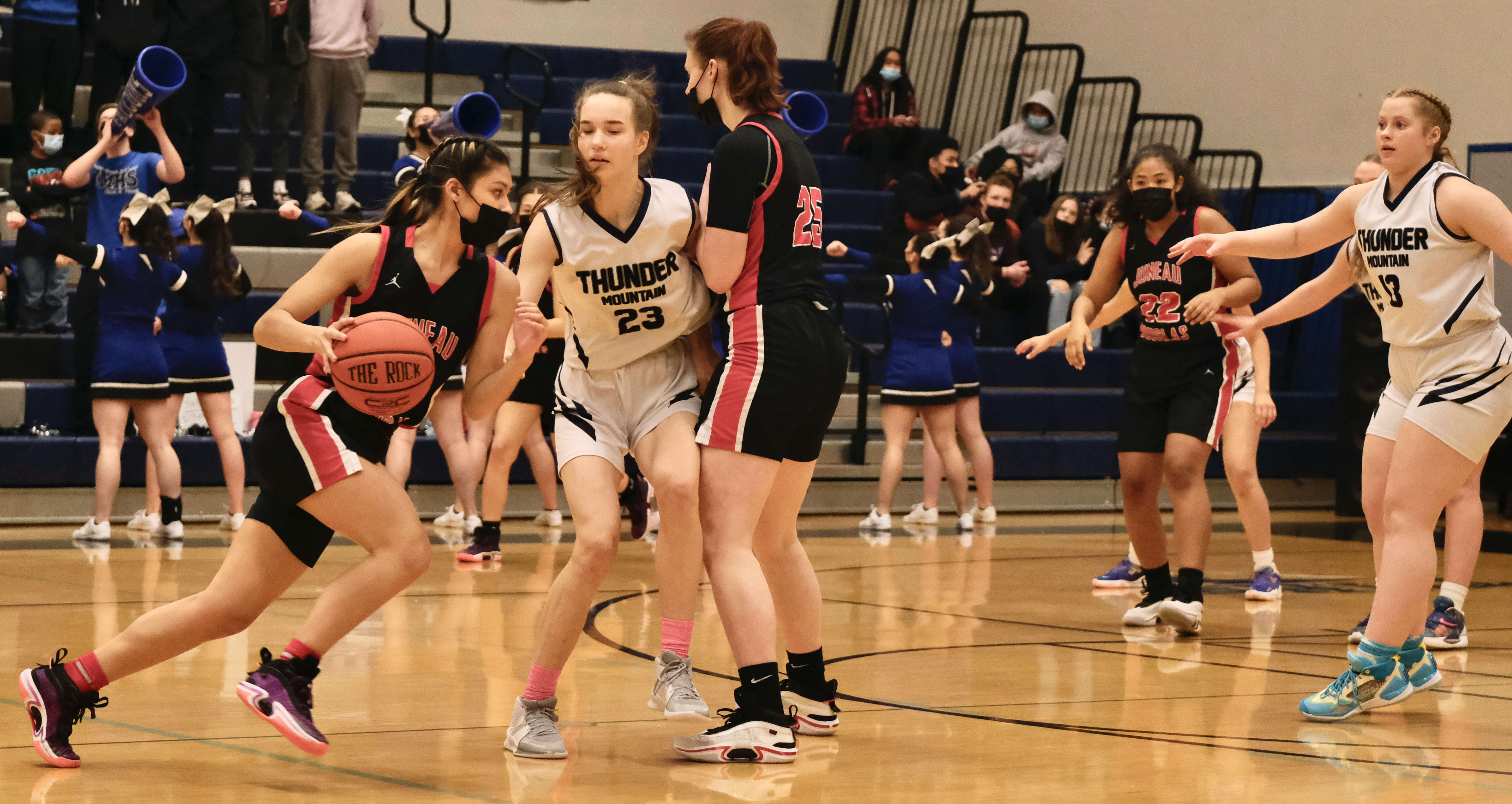 Above - JDHS senior Trinity Jackson dribbles over a screen by junior Ashley Laudert (25) as TMHS freshman Cailynn Baxter (23) defends and senior Sydney Strong (13) rotates in during Saturday's game at the Thunderdome. (Klas Stolpe)