Juneau-Douglas Topped by Kings at Ketchikan 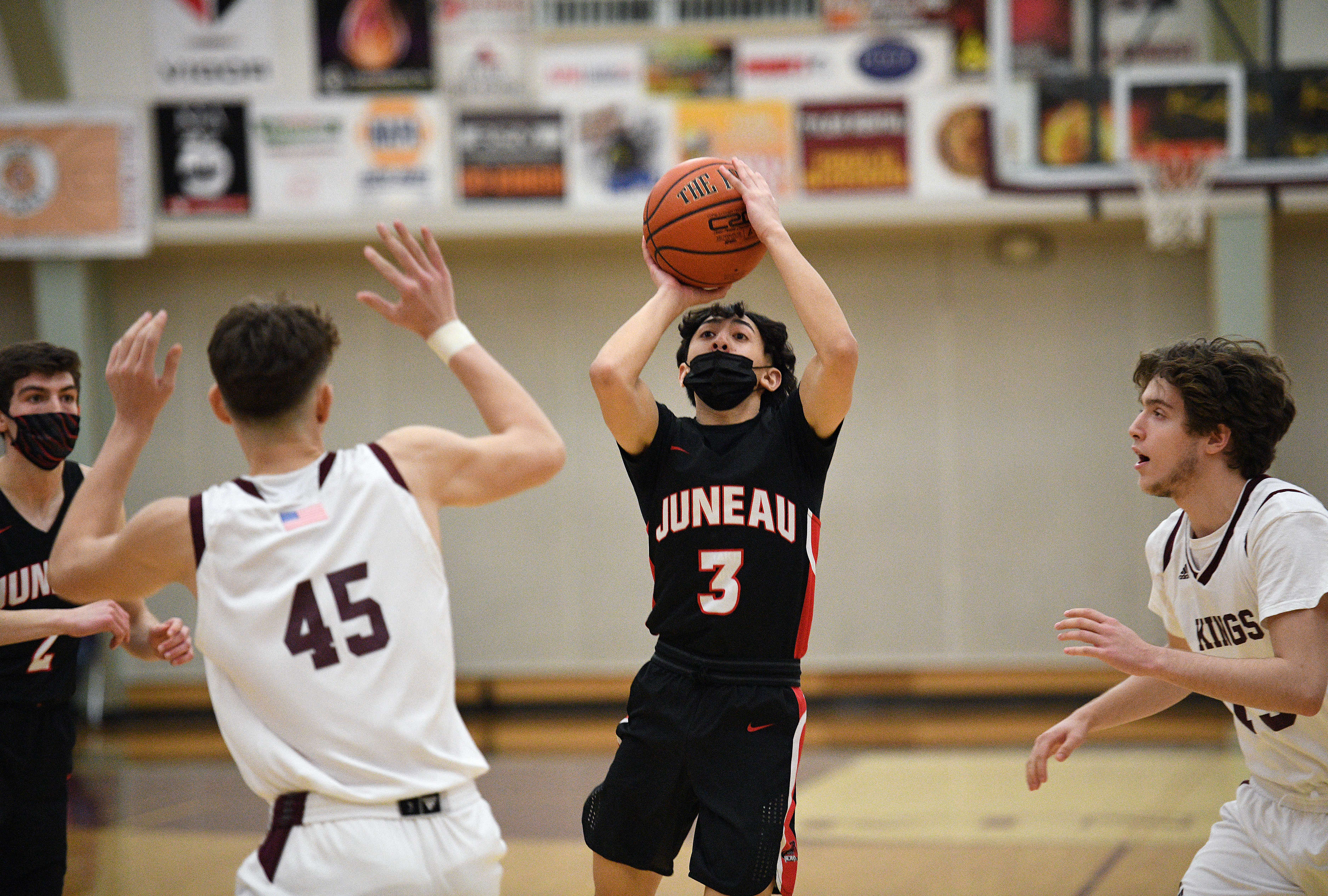 “That was our third and fourth game with a full roster,” Ketchikan coach Eric Stockhausen said. “We had not practiced together like last Tuesday since Dec. 6. So on Friday we looked like we didn’t know where everybody was going to be and what they were going to do and it was because we didn’t. Juneau deserves all the credit for Friday night, they were playing at a very high level. We watched some film of our defensive issues, we walked through it, we made a couple of game plan changes and our kids just came together and were determined to have fun playing the game.”

JDHS took a 10-8 lead after eight minutes of action on Saturday behind four points apiece from junior Orion Dybdahl and sophomore Sean Oliver and another basket by sophomore floor general Alwen Carrillo.

Ketchikan relied on two shots past the arc by juniors Clayton Olstad and JJ Parker and a driving score by junior Joeben Lorenzo to keep pace.

Dybdahl would account for seven of the Crimson Bears nine points in the second quarter while the Kings got two deep shots past the arc by junior Archie Dundas, a pair of baskets by sophomore Andrew Kleinschmidt and a free throw by senior Josh Rhoads to take a 21-17 lead into the half.

Oliver, Nelson, Dybdahl and Carrillo gave JDHS a 28-25 lead in the third quarter but Ketchikan fought back.

The Kings’ Rhoads was fouled on a shot that went in and he made the extra from the charity stripe to tie the score at 28-28. Rhoads scored on the Kings next possession for a 30-28 lead and Ketchikan closed out the quarter on an 8-2 run, including a basket by Parker and two deep shots past the arc from Dundas and Andrew Kleinschmidt.

Ketchikan went 8-13 from the free-throw line in the fourth quarter as JDHS picked up their pressure to cut into the score.

JDHS’ Nelson, Carrillo, junior Chris Harris and Dybdahl all found one basket and Oliver notched a pair of free throws for the Crimson Bears, but the Kings registered baskets by Lorenzo, Parker, Kyle Condon, Josh Rhoads and Jared Rhoads, and Dundas hit his fourth shot past the arc to outscore the visitors 21-11 and secure the win.

"Overall I believe we had a good weekend in Ketchikan," JDHS coach Robert Casperson said. "Ketchikan played with purpose and desire on their senior night (Saturday) and came away with a solid victory against us. We will learn from that experience as we get ready for our games against TM this weekend at home. It has been a few weeks since we last played TM and we know they have improved since our first matchup. I expect a lively atmosphere for the crosstown games."

Ketchikan finishes their Southeast Conference regular season with a 4-4 record. The Kings are 11-10 overall.

JDHS can earn the No. 1 seed for the Region V Tournament, March 9-12, hosted by Ketchikan, by winning one game in their two-game home series against TMHS this Friday and Saturday. TMHS can force a three-way tie for the regular season title with a road sweep.

“The most exciting thing for us is we have 10 practices with our whole group,” Stockhausen said. “That will be our 11th through 20th full practices out of the past 90 days. Every other season I have been a part of, the crescendo from beginning to end is spread out over 90 days. You have some highs and lows but it is all pointed towards this last week. We didn’t get a smooth season as far as personnel is concerned. The opportunity to just get solid is exciting. We were more solid Saturday, but we also had the opportunity to learn from failure, which normally is January for us…”

“At practice I talked about my daughter being on a band trip,” Stockhausen said. “Sitting at the kitchen table when one of your family members isn’t there just isn’t the same, even though they are teenagers they are missed. When you have a group and one is missing it is just not the same. So now that we are all seated at the table it feels like we are whole again… Will it be enough? I don’t know. There are two really good teams in Juneau that play very hard. We could do all the things we wanted, and if the ball doesn’t go in, we won’t win. We could still be fractured a little bit, and if a couple guys hit a bunch of points maybe we win. I like where we are at from a competitive standpoint mentally because we see things getting brighter.”

Casperson noted the hectic schedule for the final week.

"It's a quick turnaround for teams to start thinking about playing in the region tournament after this weekend," he said. "I believe we will be prepared and look forward to our opportunity."

JDHS established a defensive pressure that took the Ketchikan out of their sets in the first half despite the Kings' Parker and Josh Rhoads notching seven first quarter points apiece.

The Crimson Bears' Dybdahl established himself inside early and would dominate through four quarters to score a game-high 25 points.

The Crimson Bears outscored the Kings 21-10 in the third quarter and led 48-37 with eight minutes of action remaining.

Ketchikan trailed by 20 points in the fourth quarter with 2:14 remaining in the game and rallied back to pull within six points.

“We shot poorly,” Stockhausen said. “But Juneau really did a good job defensively. They forced us to make some adjustments and we controlled the pace more on Saturday. They controlled it on Friday.”