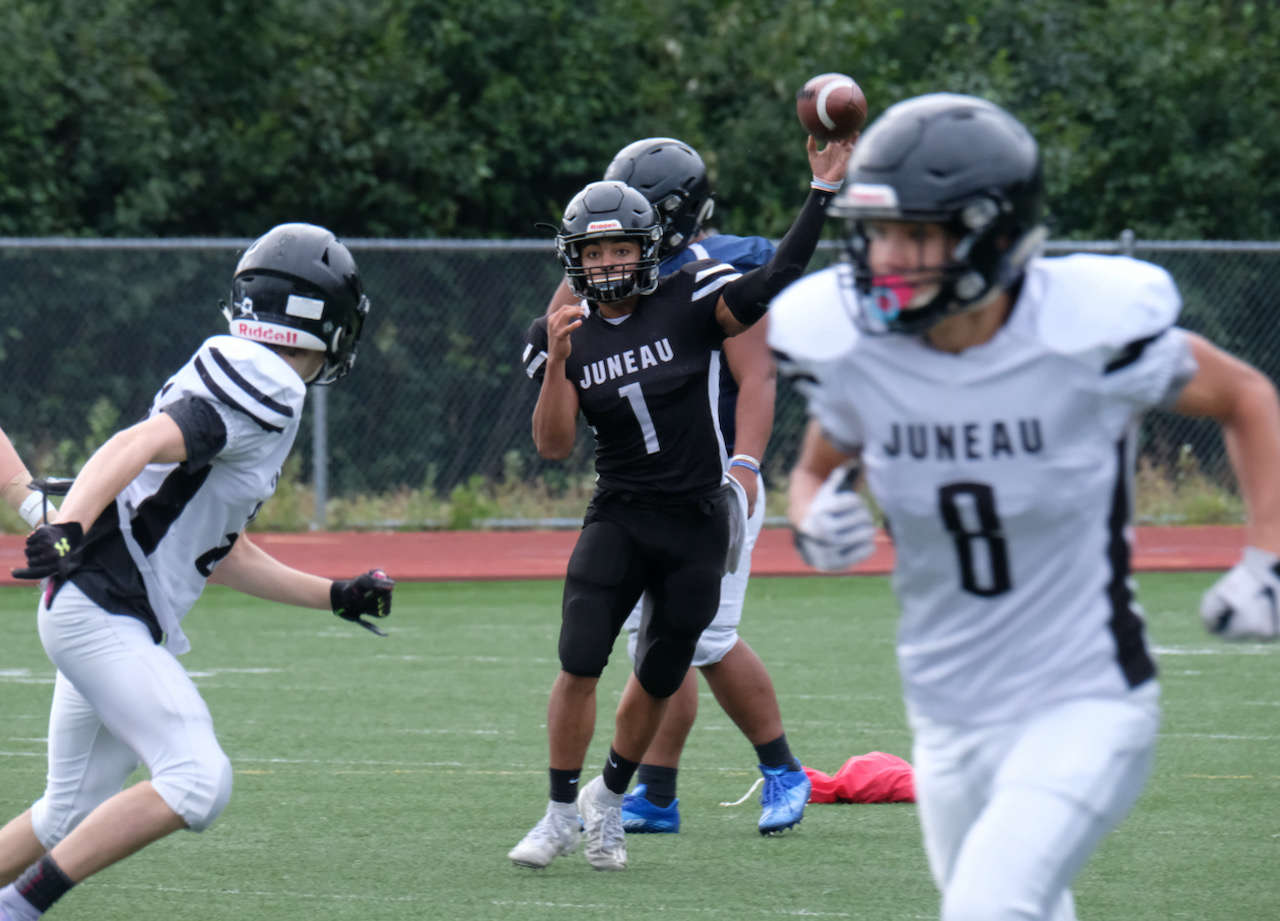 “We got a couple of rematches from the playoffs last year right out of the gate with Dimond on the road in week one and then our home opener against Bartlett week two. So I imagine those will be revenge games for those guys and hopefully we can get off to a good start on our end," head coach Rich Sjoroos said.

Last season Juneau defeated Colony 53-12 at Adair Kennedy Field, defeated Dimond 35-6 at AKF, lost to West 49-23 away, defeated East 39-28 at AKF, defeated Service 49-12 away, defeated Bartlett 27-14 away, and defeated South 42-7 at AKF to win the CIC title and earn home field advantage for the first two rounds of the playoffs in which they defeated Dimond 31-3 in the quarterfinals and Bartlett 50-30 in the semis. The Huskies fell to East Anchorage 30-17 in the Alaska School Activities Association (ASAA) First National Bowl Football State Championship at Service High School.

“Dimond’s got a lot of their skill guys back,” Sjoroos said. “They're going to be a much improved team from a year ago. I know they didn't win any games last year but if you're ever gonna say there was a scary 0-8 team I've never seen one that was better than that.”

“They've got that chip on their shoulder to get some wins under their belt so definitely a tough matchup for week one,” Sjoroos said. “And then just throughout the rest of the conference there's a lot of good players that maybe they weren't starters last year, but I think talent level in Alaska is pretty solid this year, all throughout the conference, and probably down into the other divisions as well.”

Sjoroos, selected by his peers as the Alaska State Head Coach of the Year last season, has 20 seniors returning as well as a talented coaching staff.

“We have a pretty good group of seniors and almost all these guys have been in the program for several years,” Sjoroos said. “So definitely some good veteran leadership this year, which, you know, as a coaching staff we always like to have and as a team we like to have and now it's not only, can they have a great season but can they instill some good habits and characteristics in these younger guys coming up so that we can continue the program on a high level beyond last year or this year?"

The Huskies boast a roster of roughly 54 athletes.

“The challenge with this team is that we do have a lot of seniors,” Sjoroos said. “Which is great, but our biggest class beyond the seniors are freshmen. Sometimes there's just an adjustment for freshmen, not only coming into high school in general, but in high school athletics versus youth athletics there are just a lot more boxes to check and paperwork to fill out and fundraising to do and timelines to meet. There is always a learning curve. Once we get through that, we'll be fine. I think we're a little behind in some areas of getting those kids up to speed but we had our scrimmage with the full group and I think we finally are starting to kind of turn the corner and see where the kids fit best and what's our best path moving forward as a team.”

In addition the Huskies defense allowed the fewest number of points in the conference.

A lot was lost but maybe more has been found.

In addition Williams is one of the top defensive backs in the state and senior behemoth Sam Sika, according to Sjoroos, “had a great offseason and performed really well in our camps outside the state of Alaska and definitely got his name on the radar. I think he’s excited to have a great senior season.”

Equally recognizable across the state will be defensive play from seniors Sage Richards, Hunter Derr, Chris Harris and Peyton Grant, among others, and senior Kaden Villanueva who returns to the game after last playing in eighth grade. Richards, Derr, Harris, Grant, Campbell, Johnson and White all recorded tackles for losses last season and Derr scored on a safety. Williams, White, Harris and Sika all had key interceptions.

“We definitely have some guys that played a lot of defense last year that are going to be back and coach Evan Rothfled has taken over as the defensive coordinator this year,” Sjoroos said. Rothfled and Alaska State Assistant Coach of the Year Mitch Haldane worked side-by-side last season but Haldane is coaching in Washington this year. “It's been a pretty smooth transition and I know they're still in contact with each other. They are a great tandem and I would love to have both of them but at least Evan is still here. He's gonna run defense and he's a high energy guy. Kids relate well to him and he preaches flying around the football field and tackling as a group and that kind of stuff. I’m seeing a lot of progress with the defense over the last month and I think they'll be ready to go this season for sure.”

The Huskies will have multiple athletes playing both sides of the ball.

Campbell, Richards and senior TJ Womack all had starts on the offensive line, and juniors Sione Tupou and Silvester Montez and Kyle Carter will be quality additions.

“There's definitely some new guys that have been blending in as well and coach Jeff hedges is still running the offensive line doing a great job with those guys and getting them better each day,” Sjoroos said.

With three-year starting quarterback Chambers gone the community has wondered who will take the snaps.

“Definitely going in a different direction this year and going to roll out with Jarrell (Williams) as our starting quarterback for week one,” Sjoroos said. “He’s done a great job in the offseason… definitely a different style of quarterback than what we've had with Noah (Chambers). Jarrell’s more of a get out on the move, get outside the pocket and create some things with his legs. He definitely has a strong arm and good vision down the field. So I'm excited to see what he'll do and I think he'd even raise his hand and say he will be a lot better quarterback at the end of the year than he will be at the beginning just because he'll get all the game experience and reps and things like that…”

Returning running back Jamal Johnson will help anchor the backfield to ease the burden of losing Soto as will Sika. To replace speedster Connally at receiver the Huskies will use sophomore Jayden Johnson (defensive back as well) and top returners Harris and Grant.

“So those guys will all get some reps and then Lucas White is a returning receiver as well,” Sjoroos said. “So definitely a mix of guys that are back. Maybe they didn't get tons and tons of touches last year, but definitely enough to know the offense and be ready to go week one.”

A key hole is replacing Adams’ perfect 41-41 string of extra point kicks and four field goals - one from 42 yards.

“That's still an area that we're working on,” Sjoroos said. “Matt Spratt (senior) will take on the kicking duties. He was the JV kicker last year for several of the games… Wallace (Adams), obviously, that's some big shoes to fill. He was best kicker in the state last year and I know he is down at Rocky Mountain and they are going to be happy to have him in their college program. Matt will fill in nicely.He’s been in the program for three years and he's excited to be the kicker and he also plays defensive back as well. So a lot of these kids wear multiple hats, it's just the way our programs build. That kind of gives you some depth and things like that… We’re excited. It’s always a challenge to go on the road for any game.”

“The last team that I've coached that won a road opener is clear back to 2013,” Sjoroos said. “So it's just a challenge to go on the road that first time and get Ws. Definitely going to have to be ready to play. Dimond is going to be anxious and excited about having their home fans and everything, and have us on their turf instead of last year when they had to come to Juneau twice.”

“So looking forward to a tough, tough game. It’s going to be very close and there will be a few plays you'll look back on and go, ‘Okay, those were the difference,’ and we'll build on it from there. Also the message to get across to everybody is nobody hoists the state trophy after week one. It’s a long climb up the mountain. I know we had a great year last year but none of that stuff gets to carry over to this year and we've just got to kind of create our own history and memories and do things right on the field.”

“It’s about getting the right balance in there and not lean on one person too much, especially early in the year, and just try and get some chemistry and get better each week. I tell the guys we tend to be a much, much better team in weeks eight, nine, 10, and 11 than we are in week one. That's just part of mixing in several new kids and things like that. But the challenge is not to have a bad practice. You spend so much time practicing and that's really where you get better. A lot of people look at the games as your measuring stick. To me games are great, but they're also just kind of a confirmation that the things you did in practice are working or not. I just know we've got to continue to push each other and want to get better and improve and the results will play themselves out.”

Saturday’s game against the Dimond Lynx will be broadcast live at 2 p.m. on 107.9 The Hawk. 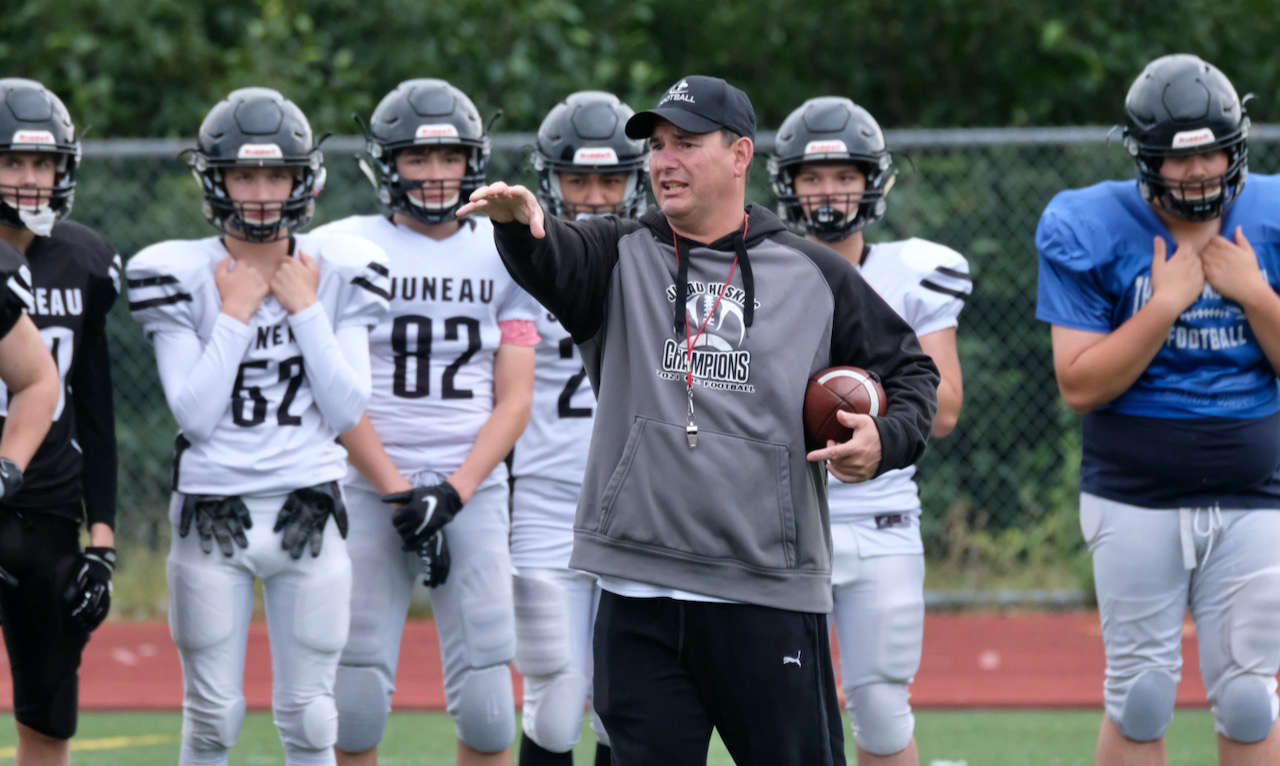 Above - Juneau Huskies head coach Rich Sjoroos breaks down a play during practice at Thunder Mountain High School field on Tuesday. The Huskies open the prep season at Dimond on Saturday. (Klas Stolpe/KINY)