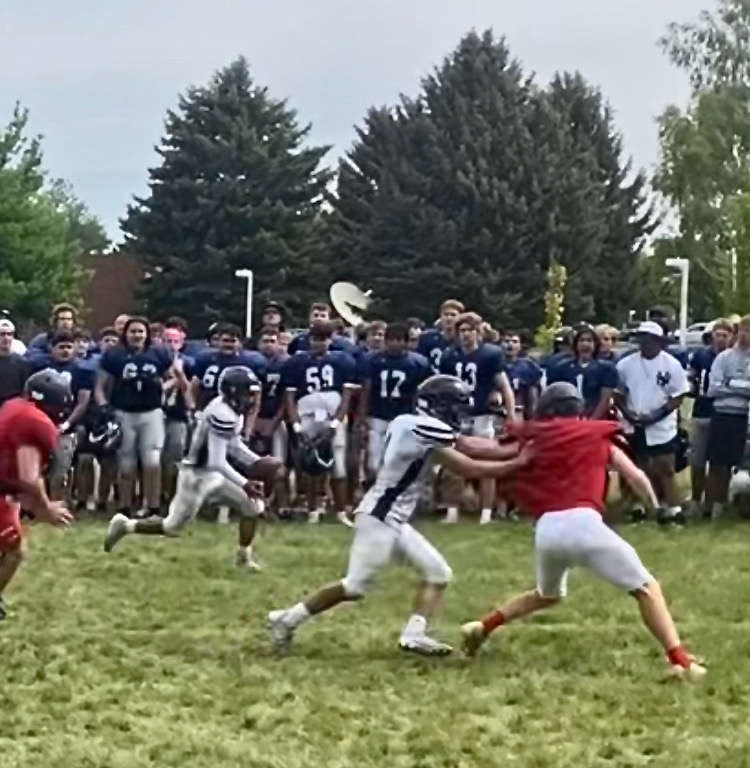 Juneau's Jarrell Williams runs with a block by teammate Jamal Johnson as other teams look on during the daily goal line challenge at the College of Southern Idaho team football camp. (courtesy Huskies Football)

Juneau, Alaska (KINY) - The Juneau Huskies football team has begun the steps needed to return to the Alaska state championship game and some of those cleat marks are in Idaho.

“It gives the kids a chance to see what a college campus is like,” Sjoroos said. “And everything so far has been going well… knowing how much work goes into playing regular season football in Juneau, to be able to do this on top of it is pretty tall task for a lot of kids so to be able to take 30 and five coaches is a testament to how dedicated our kids and our families are…”

Although the Huskies have been lifting weights all winter - some players as soon as last season ended - and participating in spring sports, these are the moments where cleats hit turf and grass, tackles are made and plays designed.

Aside from full football gear, the team had to bring their own bedding as they are in dorms and important essentials for Alaskans on the road - sunscreen.

“Yeah, sunblock, that is a big one,” Sjoroos said. “I should have double checked my sunblock. I definitely didn’t put enough on yesterday… But the kids are doing really good with that, and hydrated…”

A typical day starts with 7:30 a.m., with first call out for warmups at 8 a.m. on one of the fields. Then there will be an athlete challenge or a one-on-one drill.

Sjoroos said returning senior Sam Sika drew applause when he tackled his opponent in the first such drill.

“Everybody cheered and went crazy,” Sjoroos said. “It was a good way to kick off camp…”

Then 30 minutes are spent with your own team. Next the teams scrimmage each other in various aspects of the game. Then they do full team scrimmages like a regular game.

Next they will do a goal line challenge where camp coaches call out a team's offense and another team's defense and line them up.

“You get four plays from the 10-yard line…” Sjoroos said. “And you see if you can score and that type of thing. And that wraps up the morning session…”

Next the junior varsity groups do the same drills, then after lunch the varsity comes back again. There are four sessions per day, two JV and two varsity, each lasting three hours.

“For me as a coach it helps to get the rust off,” Sjoroos said. “Just get to know the kids… just kind of putting all the pieces together… I like going to different camps because you get to see different formats… different tempos and different focuses and things like that… and it is really nice to share some info and help each other get better.”

After three days here the team will head to Boise for the Boise State Football Camp.

The first official day of high school football practice will be July 27 and the first game is Aug. 13.